Miguel Ramos and Henrique Chaves took the Sunday race win at Spa Francorchamps, the Teo Martin Motorsport McLaren pair boosting their leader in the championship to 8 points ahead of the AF Corse APM Ferrari 488 of Louis Prette-Vincent Abril, who finished fourth today after their win yesterday.

With today’s success, Miguel Ramos reaches 20 wins in the GT Open, equalling Andrea Montermini on top of the all-time rankings. 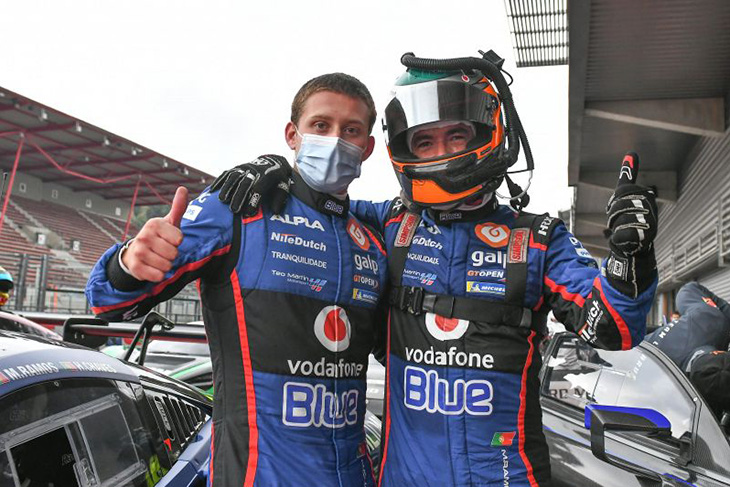 He would take the lead if his Red Bull Ring success, still under appeal, is confirmed.

It was a day of records at Spa, as Vincent Abril’s pole in the morning (2.13.724) became the new fastest lap in a GT3 car ever at the Belgian track. the mark even faster than the GTE lap record.

Nick Moss and Joe Osborne took their second Pro-Am win of the season in an Optimum Motorsport McLaren, while Florian Scholze-Jens Liebhauser (GetSpeed Performance Mercedes) are the first drivers crowned this season, having secured the Am title with a seventh race success.

The gaps would not increase much in the initial laps, with the first eight covered by 9 seconds by lap 5. Negro though, in the second APM Monaco Ferrari, was forced to pit after a spin following contact with Scholze at Eau Rouge on the first lap.

Abril was able to build up a gap to Chaves, now under threat from Eastwood, and a little gap was drawing out in front of the group of chasers, now led by Osborne, who passed Mettler on lap 9.

Lap 11 and the first pit stops began, with Mettler, Klien, Iribe and Al Harthy among the first to stop.

The leader pitted on lap 16 and after all driver changes and handicaps, Ramos was now 1.2 seconds ahead of Yoluc, while Crestani had taken third from Moss, 15 seconds behind the leader, then Pierburg, Prette (27 seconds from the top after their pitstop penalty), Hahn and Krupinski.

By lap 20, Ramos was under real pressure from Yoluc while Crestani (3rd) had reduced the gap to 10 seconds and Prette was back up to fourth after passing Pierburg and Moss.

He pushed on though and on the road at least, the Italian driver finished very close to Ramos.

The last incident of the race saw contact between Millroy and Hahn, with both spinning and recovering.