Whilst there is much talk of the imminent need for convergence in GT racing, the current health of customer sales for Porsche’s 911 RSR for 2021 seems to indicate that the urgency can be postponed for just a little longer. 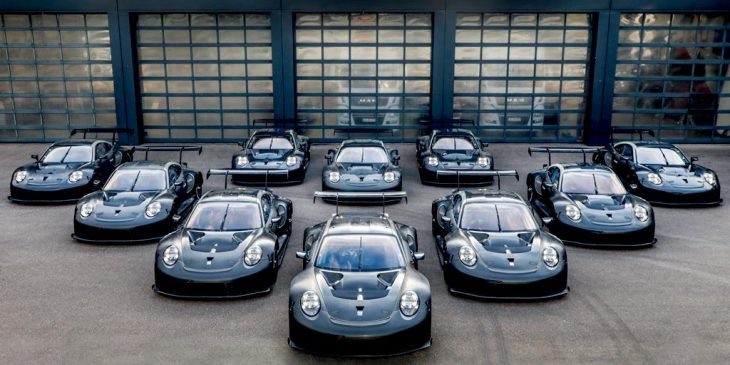 A picture released today (above) by Porsche shows ten 911 RSRs ready for delivery to customer teams for FIA and ELMS service in 2021.

All of these cars are to the revised spec tested earlier this year by Porsche replacing the side exhaust of the current factory 911 RSR-91 with a revised rear exiting arrangement.

The destination of most of these are already known, Proton Competition has already received four cars and Gulf Racing UK are understood to have received a single car. Whilst there is no confirmation as yet of the plans of Team Project 1 they are believed to be due to receive at least two cars (in addition to the three current cars, all believed to be owned by Egidio Perfetti).

That leaves a gap, which could be filled by repeat orders for previous 911 RSR Customers HubAuto and EbiMotors, or could indicate new blood for ACO rules GTE racing with GPX Racing the most likely takers, and previous Proton Competition customers KCMG also on the ‘maybe’ list!

Time will tell but confirmation of ten cars in customer’s hands is a substantial boost for the potential prospects for GTE-AM entries for 2021!