This weekend, the Autobacs Super GT Series returns to historic Suzuka Circuit for the second time in the 2020 season – for the sixth round of the championship, the Fujimaki Group Suzuka GT 300km Race, on 25 October.

In a year that was more normal than this, October at Suzuka would mean the running of the Formula 1 Japanese Grand Prix, and the JAF Suzuka Grand Prix in Super Formula. Of course, the latter has been pushed to December, while the former event was off the table months ago. In their absences, Super GT makes its second trip of the year to the legendary figure-eight circuit, the first happened on 23 August, the date originally assigned to the Suzuka 10 Hours. And of course, this time, the circuit will be open to spectators once again, some will queue up with their cars at the break of dawn and before, others may take a train into the circuit via the Ise Railway and at least one other connecting line.

In the third round of the season, Nissan swept both classes of competition – the #23 Motul Autech GT-R of Tsugio Matsuda & Ronnie Quintarelli won in GT500, while the #11 Gainer TanaX GT-R GT3 of Katsuyuki Hiranaka & Hironobu Yasuda won in GT300. This sixth round of the championship also marks Super GT’s first visit to Suzuka during the autumn months since the 2005 season finale, when Yuji Tachikawa and Toranosuke Takagi won the final race in monsoon conditions to overturn a 14-point deficit on the final day of the season, and clinch the GT500 title for Toyota Team Cerumo.

Unlike the dramatic 2005 race, this race will not crown a champion at the end of the day. Yet, this begins the most critical phase in the chase for the class championships. This is the last race of the season before Success Ballast is cut in half for the penultimate round at Motegi on 8 November, then removed entirely for the last round at Fuji on 29 November. When the Suzuka 1000km was part of the Super GT calendar from 2006-2017, it occupied a similar place on the calendar. Only now, of course, this is a more conventional 52-lap sprint race as opposed to a long-distance endurance race. 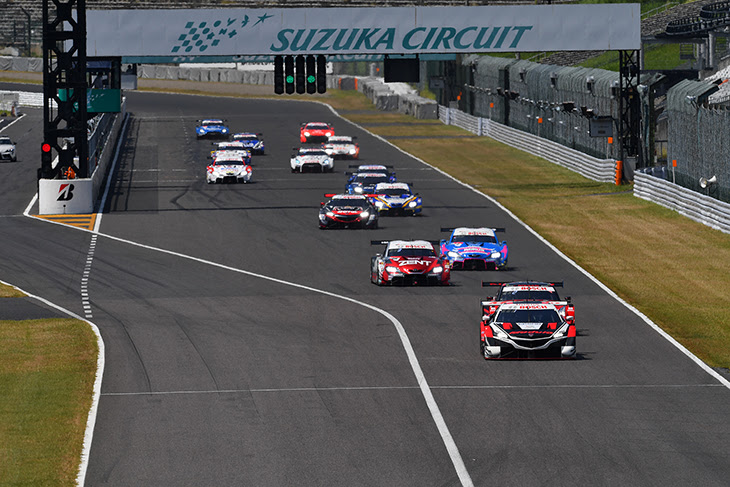 The race for the GT500 Championship is shaping up to be another classic. Nine points separate the six highest-ranked teams with just three rounds left, and the margin between the top two is only a single point.

Those top two teams have scored points in all five races thus far. The #14 Wako’s 4CR Toyota GR Supra of Kazuya Oshima and Sho Tsuboi grabbed the lead in the table on the back of their second-place finish at Fuji three weeks ago – their third podium finish of the season. Right behind them is the #37 KeePer TOM’s GR Supra of Ryo Hirakawa and Nick Cassidy, who’ve been up at the front since a dominant win in the season opener at Fuji in July. It’s nearly a carbon copy of the 2019 championship fight, with the Toyota cars sponsored by petrol company Wako’s and car care brand KeePer once again slugging it out for the title.

The #17 Keihin Honda NSX-GT of Koudai Tsukakoshi & Bertrand Baguette has rattled off two wins in the last four races after starting the year with a retirement. They along with the leading two Toyotas are on the heaviest of Success Ballast handicaps, including the “Stage 3” fuel flow restrictor that’s capped them at 85.5 kilogrammes per hour of fuel burn, a loss of around 60 horsepower, which will certainly be a detriment through the power sections at the west end of the circuit.

The next three cars have a slightly better Success Ballast situation to work with – they’re on the “Stage 2” fuel flow restrictor, and have 88.6 kg/h of fuel burn at their disposal. The #36 au TOM’s GR Supra of Yuhi Sekiguchi and Sacha Fenestraz is trying to stop a two-race scoreless skid since finishing 3rd at the August race at Suzuka. The #39 Denso Kobelco SARD GR Supra of Yuichi Nakayama and Heikki Kovalainen is coming off a win in the last round at Fuji, and has scored points in every round. So too has the #100 Raybrig NSX-GT of Naoki Yamamoto and Tadasuke Makino, who finished 2nd at the August Suzuka race, their best result of the year.

But as closely packed as these six teams are in the championship, a retirement here could result in a major hit in the standings, and could open the door for any one of a number of mid-table teams to jump them in the order: The #38 ZENT GR Supra (Yuji Tachikawa/Hiroaki Ishiura) is just 17 points behind Oshima & Tsuboi, and will look to avenge their only retirement of the season. The #23 Motul GT-R of Matsuda & Quintarelli may have won at Suzuka in August, but haven’t finished better than 8th in any of the other four rounds. They’re 22 points from the top of the table, leading Nissan’s championship hopes in what has been largely another campaign spent lagging behind rivals Honda and Toyota.

Behind them are a smattering of teams lower down the table who see this race as a last opportunity for a race win towards the end of a season that hasn’t gone to plan. Honda would certainly love a victory for one of their cars at their home circuit. The #8 ARTA NSX-GT (Tomoki Nojiri/Nirei Fukuzumi), a now-perpetual pre-race favourite to win on paper, finally nabbed its first podium at Fuji three weeks ago, and the #64 Modulo NSX-GT (Takuya Izawa/Hiroki Otsu) sat on pole position, led early on, and is poised to run well again. On paper, the #19 WedsSport Advan GR Supra (Yuji Kunimoto/Ritomo Miyata) might be Toyota’s best bet for victory. The #3 CraftSports Motul GT-R (Kohei Hirate/Katsumasa Chiyo) is another solid contender, as Chiyo still hunts for that elusive first premier class victory. 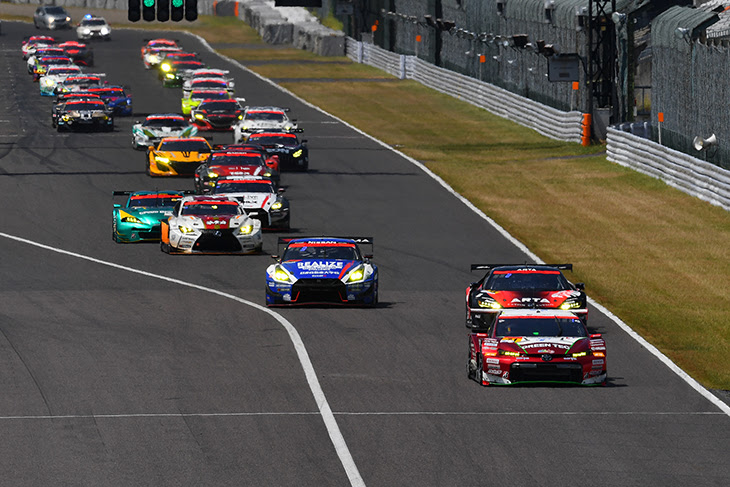 If the GT300 class action this weekend is even half as entertaining as it was back in August at Suzuka, well, just this category will be worth sitting down to watch this race from flag to flag!

The top five teams in the championship are covered by just 16 points. All five of these teams have hit the maximum Success Ballast limit of 100 kilogrammes, which is not an easy burden to manage through Suzuka’s sweeping corners and heavy braking zones. Among them are the #11 Gainer GT-R of Hiranaka & Yasuda that won here two months ago, as well as the championship-leading #65 LEON Pyramid Mercedes-AMG GT3 (Naoya Gamou/Togo Suganami), which actually thumped the sponge barriers at Dunlop Curve during a battle for the last podium place, and still managed to finish 6th!

Like the Gainer GT-R, the GT300-spec #61 Subaru BRZ R&D Sport (Takuto Iguchi/Hideki Yamauchi) has been consistent on its Dunlop tyres, and like the LEON AMG, the #55 ARTA Honda NSX GT3 (Shinichi Takagi/Toshiki Oyu) has demonstrated the potential of the Bridgestone rubber. The most recent winner, the #56 Realize Nissan Automobile Technical College GT-R (Kiyoto Fujinami/João Paulo de Oliveira), is on Yokohama rubber. All three of these teams were in the fight for the podium in August at one point during the race.

Of the JAF-GT300 and Mother Chassis vehicles, the #52 Saitama Toyopet GreenBrave Toyota GR Supra (Hiroki Yoshida/Kohta Kawaai) in 6th and the #2 Syntium Apple Lotus Evora MC (Hiroki Katoh/Masataka Yanagida) in 7th are still within striking range. They’re all carrying Success Ballast weight to having a heavyweight boxer riding in the passengers’ seat, but even still, with the right setup and clean driving, these cars should all be expected to contend for strong points-paying finishes.

Among the pre-race picks to win, the form book suggests that cars like the #31 Toyota GR Sport Prius PHV apr GT (Koki Saga/Yuhki Nakayama) come to mind, after winning the pole in August. The #10 TanaX Itochu Enex with Impul GT-R (Kazuki Hoshino/Keishi Ishikawa) was also in that great multi-car melee from two months ago. Some even like the chances of the #34 Modulo Kenwood NSX GT3 (Ryo Michigami/Jake Parsons) to take Modulo Drago Corse’s first Super GT victory, or first-year Max Racing and their #244 Takanoko-no-Yu Lexus RC F GT3 (Rintaro Kubo/Atsushi Miyake), after both cars had strong performances the last time the series visited Suzuka.

Among a raft of driver changes for this weekend, the 2020 debuts of international drivers Sean Walkinshaw and Mathias Beche in the #35 arto RC F GT3 could put Thailand’s only Super GT team in contention for a sensational upset victory at Suzuka. At this theatre of racing dreams, one can always expect the unexpected.

Mind the change of clocks – the Fujimaki Group Suzuka GT 300km Race begins Sunday, with the green flag at 13:00 JST (local time), 4:00 AM GMT / 5:00 AM CET / midnight EDT, and live flag-to-flag coverage for international audiences on The Race YouTube channel.