In the mid-noughties, LMP2 was a very vibrant marketplace with the realisation that cost control was becoming mission-critical, and that the choice of chassis, engines and tyres gave a myriad of chances to come out on top – or to fail dismally!

Their CZ-01 LMP2 contender was revealed in 2005 initially with the intention of racing the following year in the Le Mans Series. 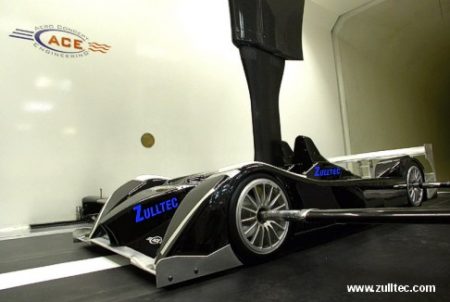 The initial rather conservative design was handled by Aero Concept Engineering (ACE), with aerodynamics developed in the former Prost F1 wind tunnel.

A one-third scale model was built by ACE, for wind tunnel work (the model is pictured to the left here).

Rivoyre Ingénierie, a carbon fibre structural analytics specialist based in the south of France was given responsibility for the laminate design of the composite chassis.

By mid-2005 the wind tunnel programme was reported as being complete, and a first chassis constructed with crash-testing programmed for late summer. Bodywork moulds and parts were also ready and a show car was presented at Le Mans with mechanical and electronics design reported to be at an advanced stage at that point.

The project aimed for a complete engine and chassis package at 480 000€, the car featuring a Ricardo transmission mated to an Infiniti IRL-derived MCT (Menard Competition Technologies) 3.4-litre V8 engine, this the concern which acquired TWR’s engine division in 2003.

Not unusually for such a programme, there were significant delays.

As will be seen that proved eventually to be an overwhelming challenge for the effort. 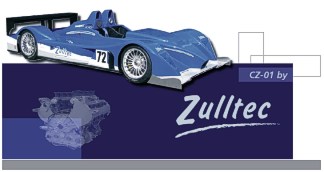 The crash test was delayed until March 2006, effectively counting out any hope of a full season effort that year, with a further delay coming along that forced a rollback to target the 2007 Le Mans Series.

Two teams were linked with the effort: GeoScan Concept (no we have no idea either!) and the rather better known Luc Alphand Adventures, with whom discussions were reported to have been well advanced.

In the end, though the effort came to nought, Zulltec simply ran out of time, but in particular the money, supplier commitments drained the efforts resources, the crash test never happened. 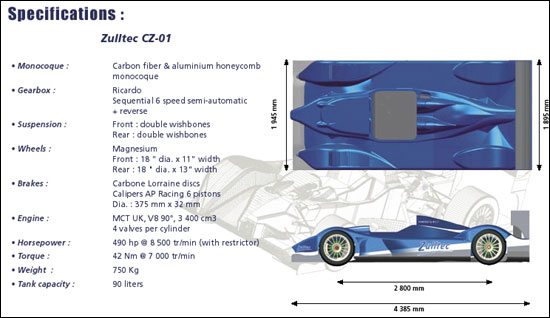 A last desperate throw of the dice saw an attempt to recast the effort as an LMP1, but it was all over!