For the third time in 2020, the orange and black #8 ARTA Honda NSX-GT of Tomoki Nojiri and Nirei Fukuzumi will lead the field to the green flag in the Autobacs Super GT Series, after capturing pole position during qualifying for Sunday’s Fujimaki Group Suzuka GT 300km Race at historic Suzuka Circuit.

After heavy rainfall on Friday, conditions were excellent all day Saturday. The #64 Modulo NSX-GT of Takuya Izawa and Hiroki Otsu was fastest in GT500 during the morning practice session, and the #61 Subaru BRZ R&D Sport of Takuto Iguchi and Hideki Yamauchi led the GT300 class, despite being one of five GT300 cars carrying the maximum 100 kilogrammes of Success Ballast into the weekend.

There was also a heavy crash in the practice session, Rintaro Kubo in the #244 Takanoko-no-yu Lexus RC F GT3 swerved out of the way of another car approaching the difficult Triangle chicane, then lost control and speared off into the sponge barriers. Kubo, who became a father yesterday, was not injured. But the rear structure of the car was thoroughly damaged, and Max Racing withdrew from qualifying and may not start Sunday’s race.

GT500 Championship contenders suffered misfortunes during Q1, as the top five teams in the table each failed to make the cut and advance into Q2. The #17 Keihin NSX-GT (Koudai Tsukakoshi/Bertrand Baguette) will start 9th, having missed Q2 by just over two-tenths. The championship leading #14 Wako’s 4CR Toyota GR Supra (Kazuya Oshima/Sho Tsuboi) qualified 10th, ahead of the #37 KeePer TOM’s GR Supra (Ryo Hirakawa/Nick Cassidy) in 11th, the #36 au TOM’s GR Supra (Yuhi Sekiguchi/Sacha Fenestraz) in 12th, and then the most recent winners, the #39 Denso Kobelco SARD GR Supra (Yuichi Nakayama/Heikki Kovalainen), in 14th.

There was also a big scare in Q1 for local hero Tsugio Matsuda in the #23 Motul Autech Nissan GT-R, when his car ran off at Dunlop Corner, briefly became airborne as it skipped over the gravel trap, and crashed into the sponge barriers to bring out a red flag. Matsuda was okay, and the damage was not terminal. He and NISMO co-driver Ronnie Quintarelli, who won at Super GT’s last visit to Suzuka, will have to start 15th, however.

Ritomo Miyata was fastest in Q1 driving the #19 WedsSport Advan GR Supra, followed by Otsu in the #64 Modulo NSX, and track record holder Nojiri in the #8 ARTA NSX. 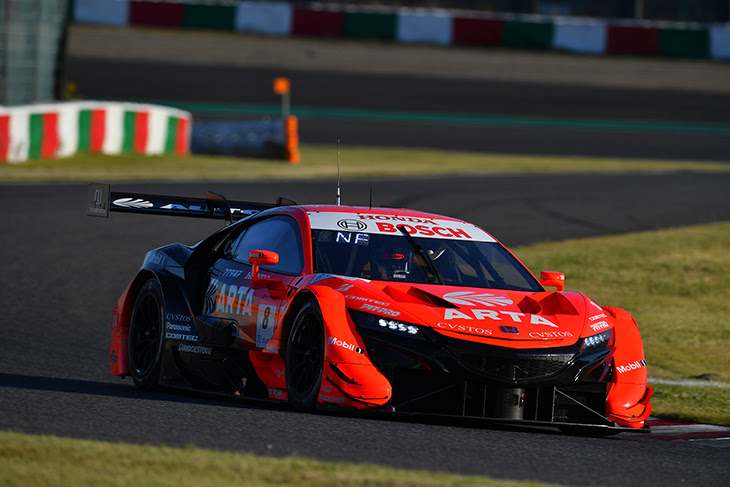 With a small number of fans able to watch from the grandstands, and surely, a few invested Honda faithful keeping tabs just down the road at their Suzuka factory, it became an all-NSX shootout for the top spot in Q2. Fukuzumi, who took his first career GT500 pole position just three weeks ago at Fuji Speedway, set the fastest third and fourth sectors to rocket his way to the top spot with a lap of 1’44.963, coming within six-tenths of his co-driver’s 2018 lap record.

Izawa would come to the line soon after, setting fastest, second and third sectors. In the end, his lap time of 1’45.054 was 1.2 seconds faster than his pole-winning lap from Round 3 in August, but after dropping two-tenths in the fourth sector, he would end up second-quickest. 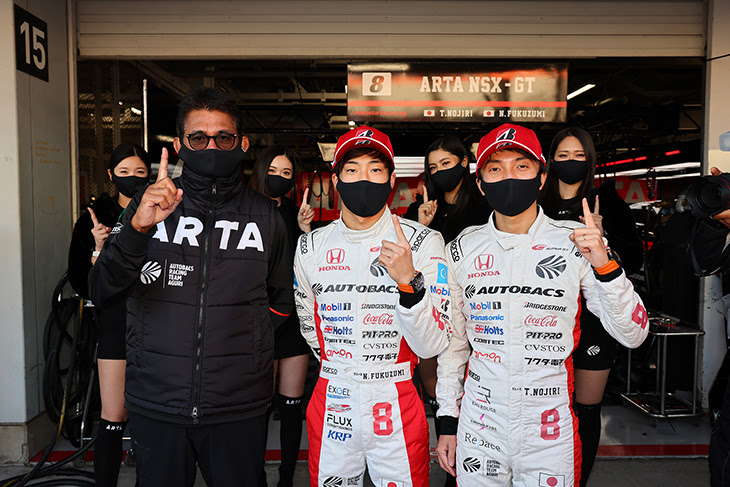 “Nojiri-san gave us good feedback about the conditions in Q1, and the team was able to make some slight adjustments for Q2 that I think worked very effectively,” said pole winner Fukuzumi in the post-qualifying press conference. “Thanks to their efforts I was able to win my second straight pole position. But this doesn’t mean we can feel too confident, because the real test is tomorrow’s race. I am going to work as hard as I can to see that we can win, and that we are the ones wearing the smiles on our faces when it is all over tomorrow.” 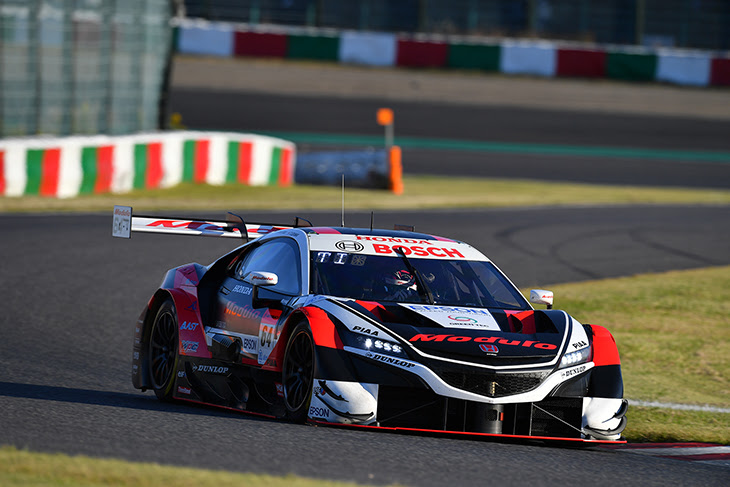 “After Q1, we received feedback from Otsu-san, and to be honest, we responded well to the changes. But in the chicane, I made a mistake,” said second-placed qualifier Izawa. “It’s my fault, but I haven’t been able to drive well since this morning. It’s a shame that I couldn’t put it all together in Q2. In the past, I think everyone on the team would have been happy with this result. But after what happened in the third round – qualifying on pole, finishing 4th in the race, it’s really frustrating for me and the team.”

Frustrating as it may be, this was still a great result for a Nakajima Racing team that hasn’t won in Super GT since the 2017 Suzuka 1000km, and a showcase of how Dunlop has brought an excellent tyre for their sole GT500 partner and their three GT300 partners.

Yuji Kunimoto put the #19 WedsSport GR Supra third on the grid in qualifying, the second straight race qualifying in the top three for the Yokohama-clad Toyota. 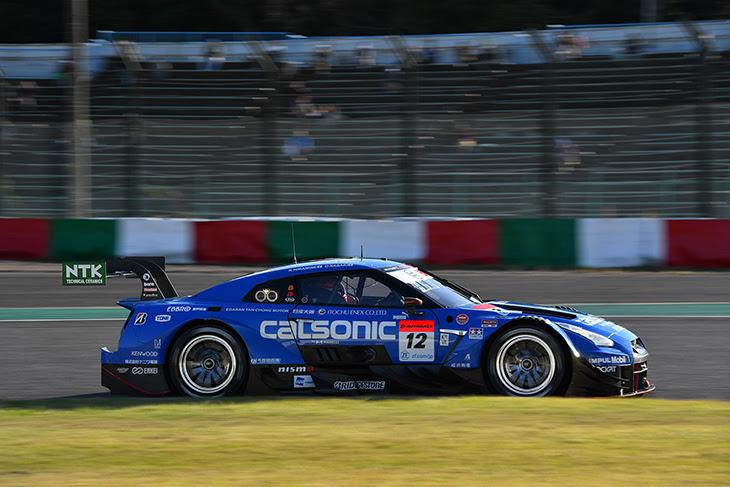 The #12 Calsonic Impul GT-R of Daiki Sasaki and Kazuki Hiramine qualified fourth-fastest. Hiramine had spun off in the last minutes of the morning practice but put it together in his Q2 attack to get on the second row of the grid.

In the GT300 class, the #96 K-Tunes Lexus RC F GT3 of Morio Nitta and Sena Sakaguchi captured pole position as Dunlop tyres locked out the front row in the class. 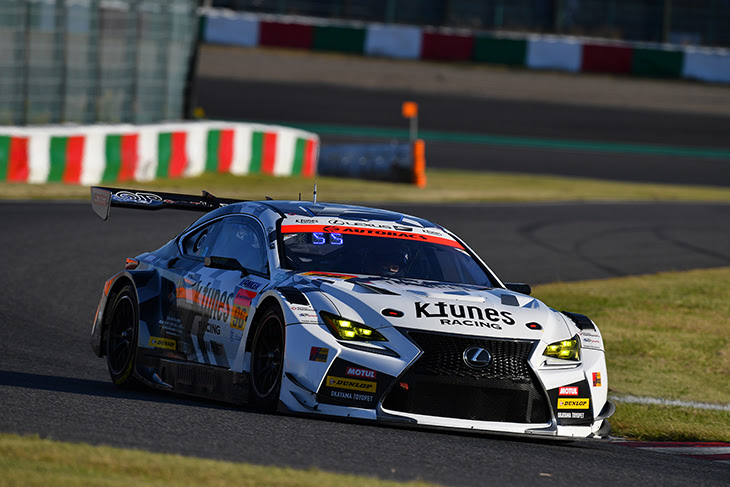 Nitta was fastest in Q1 Group A, and the #31 Toyota GR Sport Prius PHV apr GT of Yuhki Nakayama was fastest in Group B. The cherry red Prius qualified on pole back in August and has now advanced into Q2 in all six races thus far.

But two title contenders missed the cut in Q1 Group A, including the #65 LEON Pyramid Mercedes-AMG GT3 (Naoya Gamou/Togo Suganami), who entered the weekend with a nine-point lead in the standings and hadn’t missed Q2 all season. On the maximum 100kg Success Ballast, Gamou was only 13th-fastest in his group, and the LEON AMG will start 25th. Similarly, the #2 Syntium Apple Lotus Evora MC (Hiroki Katoh/Masataka Yanagida), the 3rd-place finisher at the August Suzuka race, missed the cut and will start one row up in 23rd.

In Q2, it looked as if the blue Subaru BRZ was the favourite to win pole position. Yamauchi, who celebrates his 32nd birthday today, set the benchmark with a 1’56.076 with just three minutes left in the session. That’s when Sakaguchi responded, setting the fastest first and third sectors to carry him to the top spot with a lap of 1’55.838, 2.3 seconds quicker than the pole lap in August, and just three-tenths back of the lap record set by former K-Tunes Racing driver Yuichi Nakayama in 2018. 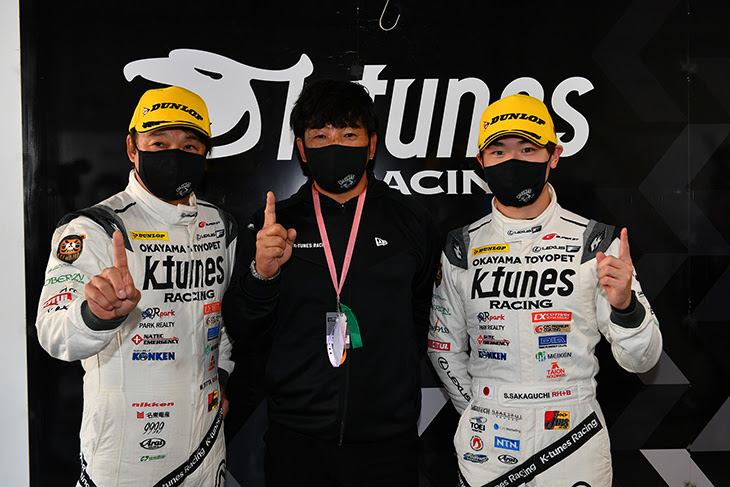 Sakaguchi held on for his first career Super GT pole position, the first for K-Tunes Racing since May 2018 at Suzuka, when Nakayama set the GT300 lap record. It has been a tough season for the team since switching to Dunlop tyres, with their only points-paying finish being a 4th at Motegi in September. In contrast, Nitta and Sakaguchi had won two of the first three races in 2019. That said, it seems like K-Tunes Racing are starting to turn a corner in the second half of 2020.

“Nitta-san really ran a great time attack in Q1 and the team did a fantastic job preparing the car,” said Sakaguchi. “The Dunlop tires also gave us excellent grip, so all I had to do was to take it from there in Q2. To tell the truth, I was nervous, so I am glad that I was able to pay them back with this result. And I feel really great to have been able to make such a good time attack in front of all the fans that came out to see us compete today.” 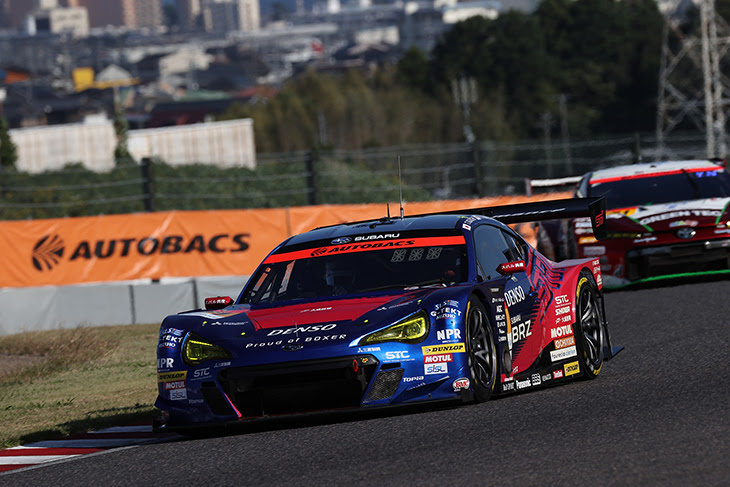 Yamauchi was thrilled with qualifying second on the maximum ballast. “I would have liked to have gotten pole position, but considering that we were qualifying with a 100 kg weight on board, I think it was close to perfect,” Yamauchi said. “The team instructed me to do two attack laps. Considering the best performance of the tyres, the first lap was the deciding factor, and here I was able to drive the car and attack without making any mistakes, so I have no regrets.”

This is a big boost for the Subaru duo of Iguchi and Yamauchi, who are fourth in the championship standings and stand to take a big bite out of Gamou & Suganami’s points lead if they can maintain their standing during the race. 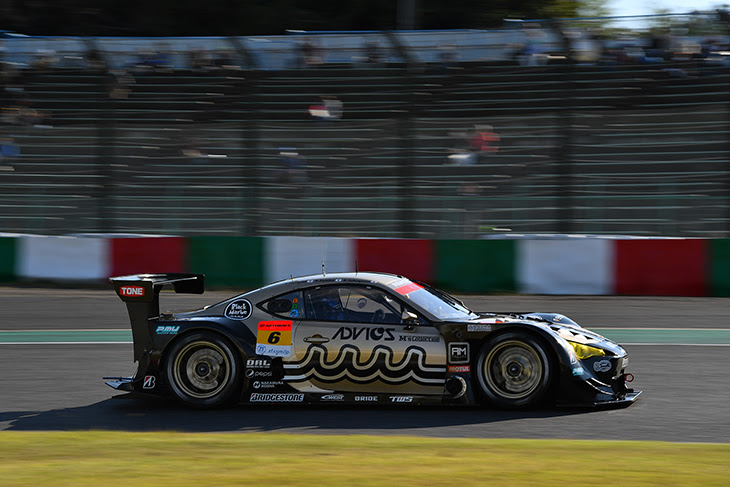 With a GT3 car on pole and a JAF-GT300 starting second, it was the Mother Chassis #6 Advics muta Toyota MC86 of Ryohei Sakaguchi and Kazuto Kotaka qualifying third, another strong qualifying performance from the rookie Kotaka. Best of the Honda NSX GT3s was the #18 UPGarage NSX GT3 (Takashi Kobayashi/Kosuke Matsuura) in 4th.

August’s race winner at Suzuka, the #11 Gainer TanaX Nissan GT-R GT3 of Katsuyuki Hiranaka and Hironobu Yasuda, made it three Dunlop runners inside the top five starting spots, qualifying 5th on the maximum Success Ballast. With their best qualifying of the season, the #21 Hitotsuyama Audi R8 LMS GT3 (Shintaro Kawabata/Tsubasa Kondo) starts 6th, ahead of the #55 ARTA NSX GT3 (Shinichi Takagi/Toshiki Oyu) in 7th, the #31 Toyota Prius of Saga and Nakayama in 8th, and the #360 RunUp Rivaux GT-R (Takayuki Aoki/Takuya Otaki) in 9th, with the debuting Otaki just missing out on a top spot in his Q1 group.

Sunday’s race goes green at 13:00 JST, and for prospective viewers in Europe, the UK, and Ireland, the clocks go back one hour on that day – so prepare for a 4 AM GMT / 5 AM CET start.