The #98 ROWE Racing Porsche 911 GT3 R drove to victory in sopping wet conditions at the 2020 Spa 24 Hours after taking the lead in the hands of Nick Tandy in the penultimate hour with a blend of speed, aggression and winning strategy and handling what sounded like a serious mechanical problem on the final couple of laps, he’d take the win by 4.6 seconds (it seems the car had a broken gearbox!)

It means that the team take both the Nürburgring 24 Hours and Spa 24 Hours wins in 2020 with the extraordinary record of having done so with two different factory-supported GT3 programmes (winning the N24 with a BMW M6 GT3.) 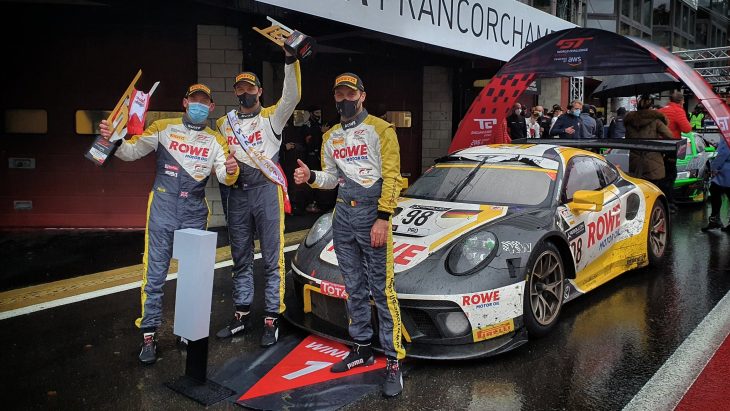 Tandy takes the win together with team-mates Laurens Vanthoor and Earl Bamber, Tandy and Bamber taking their second major 24-hour race overall win together after the 2015 Le Mans 24 Hours. Vanthoor takes his second overall Spa win after winning with Audi in 2014.

It would be a second consecutive win at the Spa 24 Hours for Porsche after GPX Racing’s win last year.

Audi Sport will feel unlucky not to have won having pulled a tactical blinder with two hours to go risking going for wets early on the #66 Audi Sport team Attempto Racing, Patric Niederhauser, Mattia Drudi and Frederic Vervisch though would lose out with late-race cautions closing up the field and yielding a near 2 minute lead in the penultimate hour.

Ironically it may be that case that a last lap potential charge was thwarted by oil being dropped by the lead car!

Third would go to the #54 Dinamic Porsche, Matteo Cairoli passing the #51 Ferrari in the final 15 minutes with an epic pass on Pier Guidi at Eau Rouge taking the #51 out of what would otherwise have been the Ferrari’s first overall podium at this race in the GT3 era! Sven Muller and Christian Engelhardt shared the podium slot.

The class wins went to the #77 Barwell Lamborghini in Pro-AM, 16th overall, Sandy Mitchell starring in a line-up that included Leo Machitski and father and Son Rob and Ricky Collard, the first father and son class winners in the GT era.

The Sky Tempesta Ferrari came in second with the #188 Garage59 Aston Martin third in class.

The race went back to green with 39 minutes remaining, Tandy at the front of the queue.

At the end of the first green flag lap

In clear air, the leading pair are haring away as the chasers deal with traffic.

30 minutes remaining and Tandy is taking only tenths out of the Audi but they are both pulling away from Pier Guidi. Jaminet muscled by Boccolacci for 6th.

Into the final 15 minutes, the final podium place was snatched by Matteo Cairoli with an epic pass up the inside of the #51 through Eau Rouge, the #54 Porsche pulling away and the Ferrari dropping back into the clutches of Jaminet in the #12 GPX Porsche who had passed and pulled away from Engel.

Jaminet would claim 4th by the flag!