Even in these troubled times the ever-astonishing specialist motorsport industry continues to innovate and to present new products designed to attract new blood to the sport – In the coming days we present details of several new offerings.

The new KTM X-BOW GTX and GT2 Concept has been unveiled both online and with a presentation at the Spa 24 Hours.

The full carbon fibre racing car from KTM Sportcar GmbH is an extreme track-only development from the original model of the KTM X-BOW, which has been on the market since 2008. The car is designed to compete at GT3 level wher permitted and in GT2 competition too – it will be homologated for that purpose.

The car has been developed in partnership with Reiter Engineering for both track days and for use in racing.

KTM board member Hubert Trunkenpolz: “Together with Hans Reiter and his development team, our engineers have set a new standard for full carbon racing cars with the KTM X-BOW GTX. Our new car is not only beautiful, it is trendsetting in all areas. Especially in terms of safety, efficiency and detailed technological solutions, we see a real revolution, apart from the design and the incredible manufacturing quality of the carbon fibre chassis.”

A development version of the car has already raced in GT Open and 24 H Series. 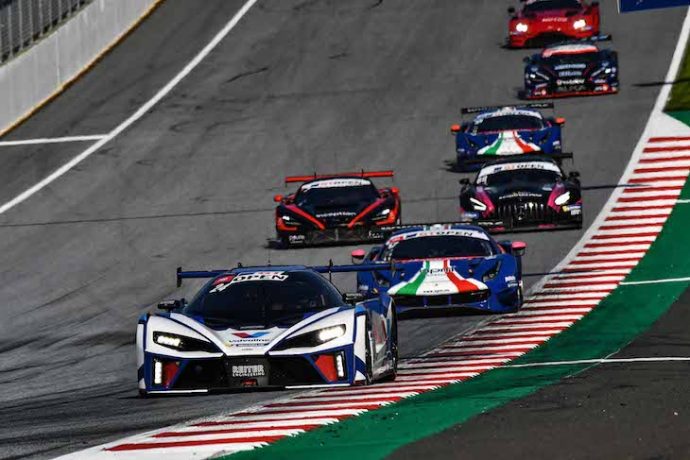 In addition, the driver sits in a Recaro competition seat, developed according to “Advanced Seat” criteria.

“With the KTM X-BOW GTX we can combine these two wishes in the best possible way.”

The KTM X-BOW GTX, which weighs only 1,048 kilograms, is powered by the ultra-modern 2.5 litre five-cylinder turbo engine from Audi, developing 530 hp. 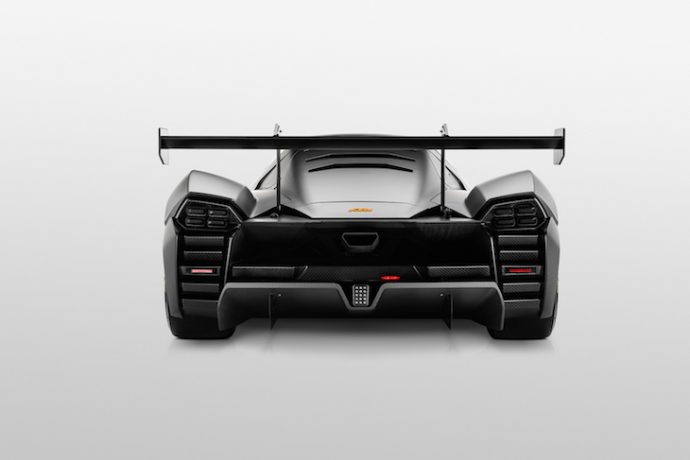 In conjunction with the 120 litre FT3 safety tank, the KTM X-BOW GTX has excellent track day, and, depending on performance balancing, long-distance race fuel range, and the low weight also reduces wear and tear and thus the overall running costs. 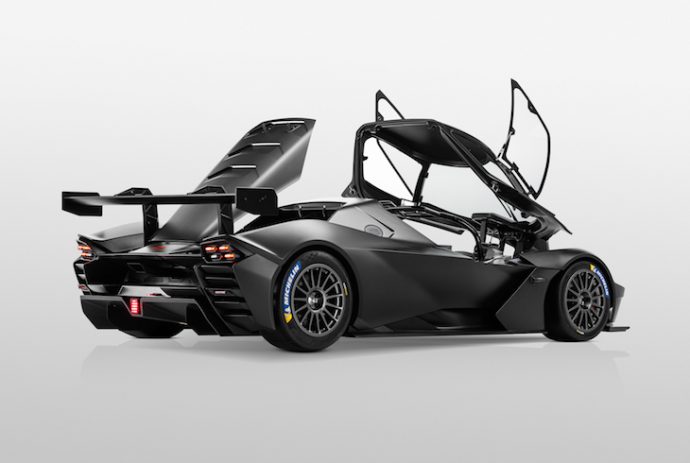 GT rollcage: Newly designed and homologated according to FIA Appendix J, the GT roll cage withstands the multiple weight of the vehicle in the rollover pressure test and now also has side struts in the monocoque as well as a full cross behind the driver’s seat.

Competition seat: Together with partner Recaro, KTM has developed a competition seat made out of carbon-kevlar, which, in combination with the GT rollcage and carbon monocoque, establishes the extremely high safety standard of the KTM X-BOW GTX. With individually adaptable paddings, the shell is adaptable to the driver, a homologated six-point racing harness from Schroth is standard.

Canopy: The unique “Jetfighter Canopy” of the KTM X-BOW GT4 is carried over to the KTM X-BOW GTX. However, the design has been completely revised, the formerly one-piece ‘Plexiglass’ canopy is being replaced by a carbon frame with an inserted windshield and separately opening glass doors on both sides, the complete canopy can of course still be opened for entry and exit. The front screen is made of Makrolon and can be replaced quickly and cheaply if it is worn.

Steering wheel: The suede racing steering wheel of the KTM X-BOW GTX is completely new in terms of looks, feel and ergonomics and has an integrated display that keeps the most important information in the driver’s field of vision. Every important control element is located in the central part, made out of carbon fibre. The steering column and position of the steering wheel can still be adjusted in height and depth.

Pedal box: Together with the variable adjustment of the steering wheel, the KTM X-BOW GTX also has a pedal box which can be adjusted by around 30 centimetres, and which, especially in long-distance races, allows adaptation to drivers of different sizes in the matter of seconds.

Electric gear shifter: Le Mans prototypes have been using electrically operated gear shifters for quite a time now, but the technology has been too expensive for widespread use so far. SaReNi has now developed the tech for the GTX. The shifting operations are even more precise (the gears are always switched at the right connection speed), the material (especially gears and shafts) is preserved, and around seven kilograms of weight are saved by eliminating the hydraulic compressor, pressure accumulator and lines. In addition, the design is highly integrated, with oil pump, oil filter and oil-water heat exchanger located directly in the gearbox housing.

Camera rear view mirror system: Instead of classic side mirrors, the new KTM relies on a high-tech system with two cameras and two screens on the right and left of the vehicle and in the cockpit.

120 litre tank:  FT3 safety tank equipped with a VLN (NLS) valve as standard, the tank can also be converted with a quick refuelling option on the left, the right, or on both sides of the car.

Interior ventilation: Air routing and ventilation have been revised, the air outlets are also new and repositioned. Thanks to the higher air output and a stronger fan, the cockpit is significantly more effectively ventilated, and the ventilation of the windshield has also been improved.

The wishbones made of high-strength steel are designed in an aero-profile form, which is particularly important on the front axle, since there the air is led to the rear, laterally arranged radiators past the wishbones. They are combined with aluminium wheel carriers milled from solid, which, thanks to ingenious mechanics, have integrated a quick camber adjustment, which eliminates the need for time-consuming modifications when changing the camber and, above all, does not affect the track set-up of the car. 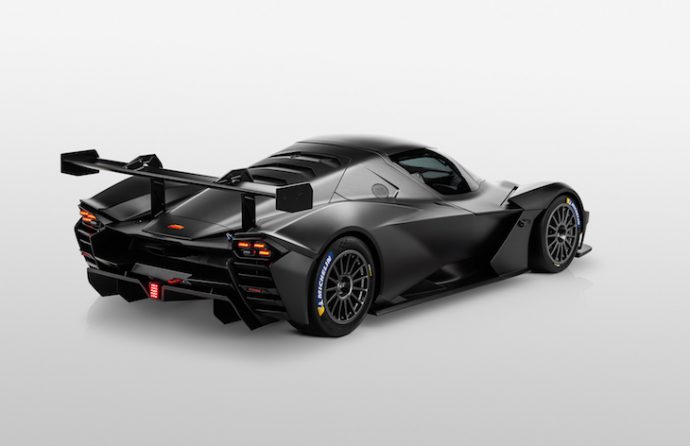 Power Distribution Unit: The KTM X-BOW GTX has an electronic fuse box from SaReNi. The fuses are no longer physically available but programmed individually. This reduces the susceptibility to errors and ultimately the probability of failure during racing, since short voltage peaks do not “drop” any physical fuse (and paralyze the car or a system). Rather, the electronic fuse “engages” itself again, and the car continues to drive without any problems.

Audi 2.5 liter five-cylinder TFSI: The 2.5 litre engine is the latest variant of the legendary five-cylinder unit from Audi, the great grandson of the power plant that caused a sensation in motorsport in the Audi S1 in the World Rally Championship and in the Audi 80 IMSA GTO .

The current unit produces 500 PS and develops a maximum torque of 650 Nm, the “innards” of the engine are factory stock with its air-cooled intercooler untouched, only the injection valves, the wastegate, the intake system, the exhaust system and the software have been adapted.

Sequential gearbox: The tried and tested sequential six speed MF model from Holinger that has a continuous load capacity of 750 Newton meters and a peak load capacity of 1,000 Newton meters, ideally suited to converting the power engine into effective propulsion. A sintered metal racing clutch, an easier drive and a limited-slip differential are helpful.

Rear frame made of high-strength tubular steel frame:  The rear frame is made of high-strength steel tubes. On the one hand, it houses the engine, on the other hand the gearbox , the mounting points for the rear suspension and provides the attachment for the high-performance radiators. Numerous crash elements at the rear of the car ensure that the valuable technology remains as undamaged as possible in the event of rear-end collisions.