The third round of the 2020 Pirelli Super Taikyu Series at Okayama International Circuit will feature a 50-car entry list, divided into groups of 22 and 28 cars respectively for the two three-hour races that will take place Saturday, 31 October, and Sunday, 1 November. 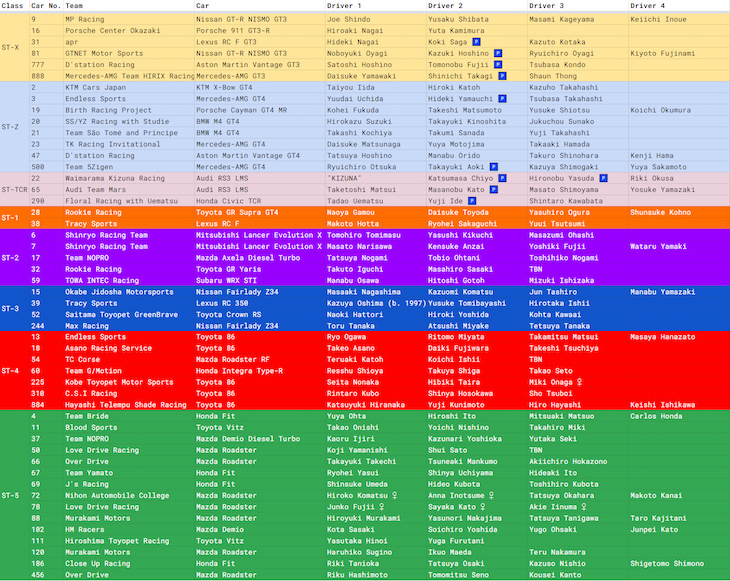 The ST-X class (FIA GT3) grid will be back up to six cars, as Porsche Center Okazaki will make a second appearance with their #16 Porsche 911 GT3-R that won last time out at Sportsland Sugo with Hiroaki Nagai and Yuta Kamimura. GTNET Motor Sports will return with their #81 Daishin GTNET Nissan GT-R GT3 (Noboyuki Oyagi/Kazuki Hoshino/Ryuichiro Oyagi/Kiyoto Fujinami), that withdrew from Sugo as a result of damage sustained in the Fuji 24 Hours.

Eight cars are entered in the ST-Z (FIA GT4) class, where the #3 Endless Sports Mercedes-AMG GT4 of Yuudai Uchida, Hideki Yamauchi, and Tsubasa Takahashi will aim for its third straight win of the season. Audi Team AS Sport are the only absence from the previous round.

In ST-1, Tracy Sports have brought back their #38 Lexus RC F to compete against Rookie Racing’s pre-homologation Toyota GR Supra GT4. Rookie Racing also have a driver slot open in their #32 Toyota GR Yaris in ST-2, which is expected to be filled by Toyota president Akio “Morizo” Toyoda before the start of the weekend.

Fifteen of the 22 entries in the Group 2 race are in the ST-5 class, which is boosted by the return of Kyoto-based Bloodsports Racing and their #11 Toyota Vitz, and another spot start for Team Yamato’s silver #67 Honda Fit. Mazda’s head of design, Ikuo Maeda, will drive a second Mazda Roadster from Murakami Motors.

Both races will be live on Super Taikyu’s official YouTube channel, starting with Saturday’s Group 2 race, and concluding with the main event, Sunday’s Group 1 race. Both races start at 1:30 PM JST / 4:30 AM GMT / 5:30 AM CET.