It was a tale of two races during the final Michelin Le Mans Cup event of the year with the LMP3 title still up for grabs and to be decided between the #37 Cool Racing and #3 DKR Engineering teams.

It was Nicolas Maulini in the Cool Racing Ligier who led the field from pole position ahead of Graff’s Rory Penttinen and Moritz Kranz in the Muhlner Motorsport Duqeine. The race quickly settled into a rhythm with Maulini taking full advantage of the fight for second behind him. A quick safety car intervention to retrieve the beached CD Sport Ligier of Michael Jensen did not change the dynamic of the race up front but it did allow other teams to roll the dice and take an early, long stop. 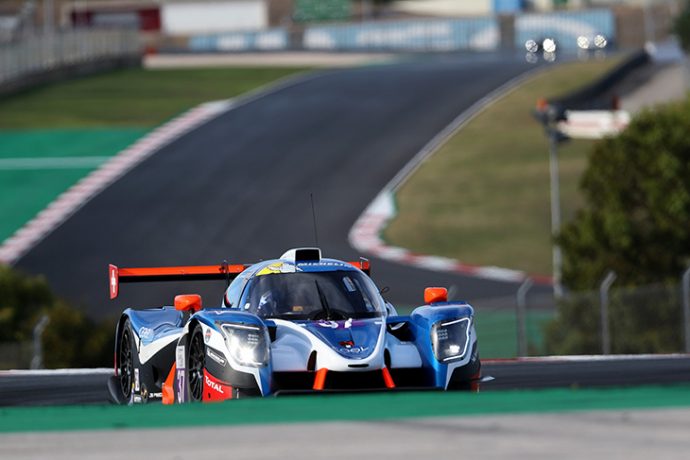 It was MV2S that pitted Christophe Cresp under the safety car and put in Fabian Lavergne. The 2019 ELMS GTE champion stealthily worked his way up the order, only getting noticed by the stewards for repeated track limits infringements. This earned the team a drive-through penalty but such was the advantage gained from taking the long stop under safety car that when teammate Christophe Cresp got back behind the wheel to fulfil his minimum driving time, he rejoined in second behind Eduard Cauhaupe who had taken the wheel from Maulini and were doing everything they needed to do to be in with a shout for the LMP3 title.

That was until Christophe Cresp spun the MV2S Ligier and was collected by Andy Meyrick in the #24 United Ligier. Heavy contact meant that both cars were immediately out of the race and needed to be retrieved, bringing out the second safety car of the race, with 20 minutes to go and at exactly the right time for the final mandatory short fuel stop.

However, this came at exactly the wrong moment for Cool Racing who had just passed pitlane and had to do a full lap behind the safety car before pitting, dropping it from the lead to seventh while championship leaders DKR Engineering were able to capitalize.

DKR starting driver Wolfgang Triller was drafted in last minute to replace Jean Glorieux who had to self-isolate following a positive Covid-19 test for a close family member and made steady progress from twelfth on the grid to hand the car over to Laurents Hörr well in the top 10. Hörr was tasked by the three-time championship-winning team to hold station and duly delivered before taking full advantage of the late safety-car to move up to fifth, ahead of the Cool Racing racing and safely headed for the LMP3 title. 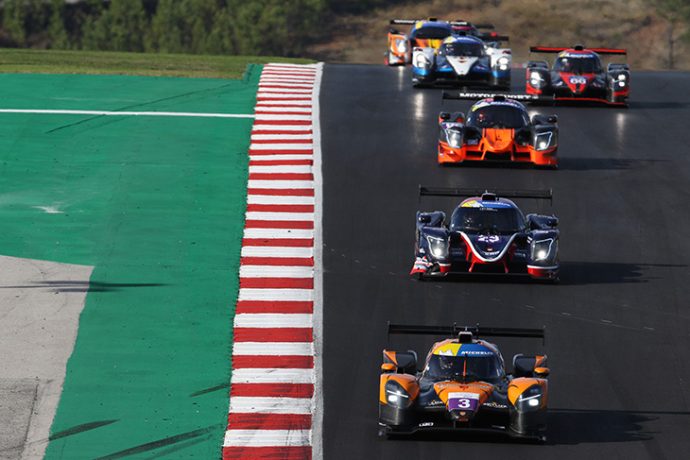 At the front, the battle now raged between Matthias Kaiser’s Graff Racing Ligier and Colin Noble in the Nielsen Racing Duqueine. Noble looked to challenge but a penalty for Kaiser, given for overtaking under the safetycar was announced but not served. Noble was told of the penalty and did not challenge further, finishing second on the road but inheriting the win. 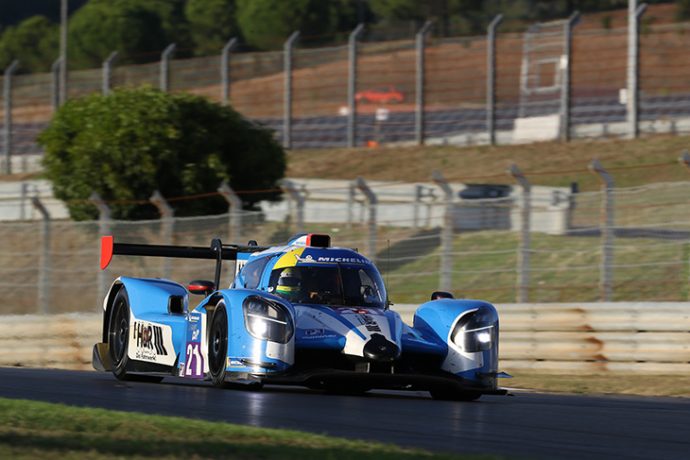 Third on the road was the #21 Mulhner Motorsport Duqueine of Moritz Kranz and Alex Kapadia, ahead of the 98Motorsport Ligier and the biggest winners of the day, the DKR Engineering Duqueine that sealed the title for Laurents Hörr after a truly remarkable race.

Post Race Update – the result is now official with the following penalties applied:

Cars #26 and #98 both receive 29 second time penalties for nit serving drive-through penalties – they drop to 7th and 8th places respectively.

Rino Mastronardi started the way he finished qualifying: by putting the hammer down continuously. A strong start ensured that the Iron Lynx Ferrari 488 GT3 got among the second half of the LMP3 field and the Italian impressed throughout the opening phase of the race to build up a large lead. Giacomo Piccini, second in the GT3 class standings this season behind teammate Mastronardi, “only” had to defend the 15-second lead after the mandatory pitstop. 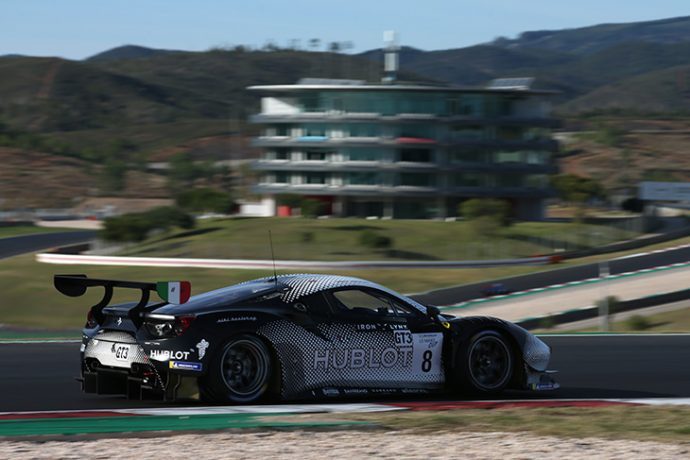 Behind the white-and-black Iron Lynx Ferrari, there was early drama for Niki Leutwiller in the Pzoberer Zürichsee by TFT Porsche. Leutwiler hung on in the opening laps but dropped back after a brief off. This left Kessel’s Michael Broniszewski in second ahead of the recovering Leutwiller before the pitstops came halfway through the race.

Julien Andlauer set the Algarve track alight with his pace in the Pzoberer Zürichsee by TFT Porsche after taking over from Leutwiler. The young Frenchman reeled off a succession of fastest laps and ended up posting a 1.40.795 as he tried to catch David Perel in the Kessel Ferrari for second place while the South African himself was slowly but surely reeling in the leading Iron Lynx Ferrari but with time running out.

That was until the late safety car following the Andy Meyrick/Christophe Cresp incident bunched the field back up with only twenty minutes to go. 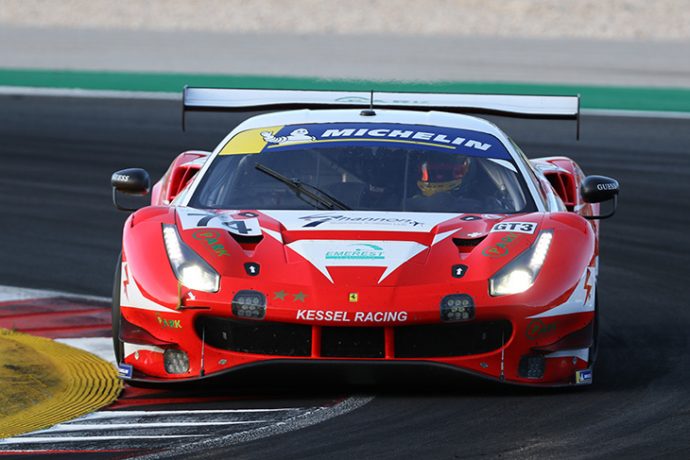 Following the restart Piccini, Perel and Andlauer found themselves in amongst the LMP3’s as battled resumed and Perel was immediately on the attack, ducking to the right and coming alongside Piccini. The Italian defended extremely vigorously, squeezing the Kessel Ferrari all along the straight, over the white line of pit exit and nearly onto the grass while braking for the first corner. It earned the team an immediate visit to race control.

Perel was undeterred and kept up the attack while Andlauer’s push faded thanks to heavy LMP3 traffic. Piccini, however, would not be denied the win on track, beating Perel to the line by 0.239 with post-race question marks surely still hanging over the defensive move into turn one.

(Update – the result in GT stands – the move deemed legal)

All in all, it was an eventful way to end an eventful Michelin Le Mans Cup championship with GT3 title-winning team Iron Lynx coming away with a fourth victory while Nielsen Racing taking their first and much sought-after win of the year.