For the season-finale of the Ligier European Series at the Algarve International Circuit, Milo Racing in Ligier JS P4 and M Racing in Ligier JS2 R repeat their performances of the Heat 4 at Monza. In Ligier JS P4, Kévin Balthazar in the #81 Milo Racing sports prototype wins both races. In the JS2 R category, M Racing’s Natan Bihel in the #66 GT and Mathieu Martins in the #86 car finished one-two in both races.

At the conclusion of this final round, the two favourite teams and drivers have won the titles. After a fantastic season, Italian driver Andrea Dromedari in the #50 HP Racing Team Ligier JS P4 and Sébastien Baud in the #74 Cool Racing Ligier JS2 R win the titles in their respective categories.

Blue skies and comfortable temperatures in Portugal at 9:40am local time, in the first race of the Ligier European Series season-finale and for the 13 Ligier JS2 R and JS P4s to battle it out. The stakes: the title in both categories. And the two favourites both have a commanding lead in the championship: Andrea Dromedari in the #50 HP Racing Team Ligier JS P4 and Sébastien Baud in the #74 Cool Racing Ligier JS2 R.

For the two challengers, Kévin Balthazar in the #81 Milo Racing Ligier JS P4 and Natan Bihel in the #66 M Racing Ligier JS2 R nothing less than victory will do to keep their respective title hopes alive. 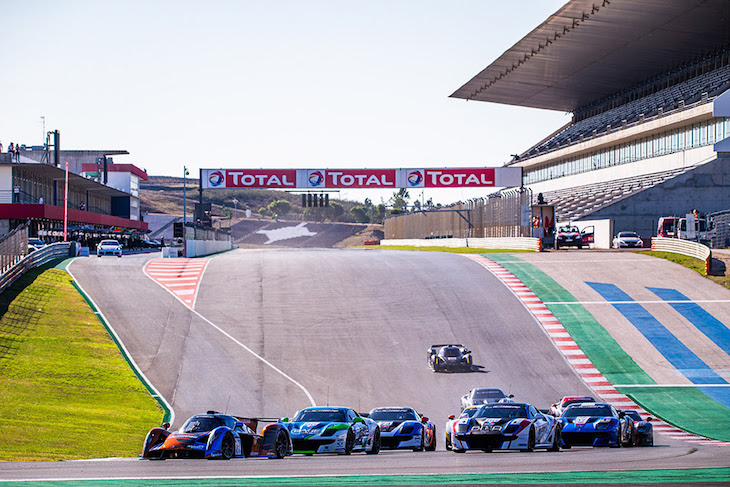 Slight advantage for Kévin Balthazar in the #81 car, who started from pole. Andrea Dromedari in the #50 had problems in qualifying and set off from the back of the grid. Kévin Balthazar led the race, while the Italian began his march through the field. He was up to fifth place when the safety car was called into service at the 17-minute mark of the race. This was unwelcome news for the race leader who saw his 40-second lead reduced to nearly nothing.

Following the pit stops and with 20 minutes remaining, while Andrea in the #50 HP Racing Team car was in second place, Kévin in the #81 Milo Racing machine pushed his lead back up to 35 seconds. With the fastest lap in the race clocked at 1:47.185s, he crossed the finish line with a more than one-minute lead. He fulfilled the first condition to remain in contention for the title. Now he had to win the second race and hope for a mistake from his adversary, who would most likely play it safe. 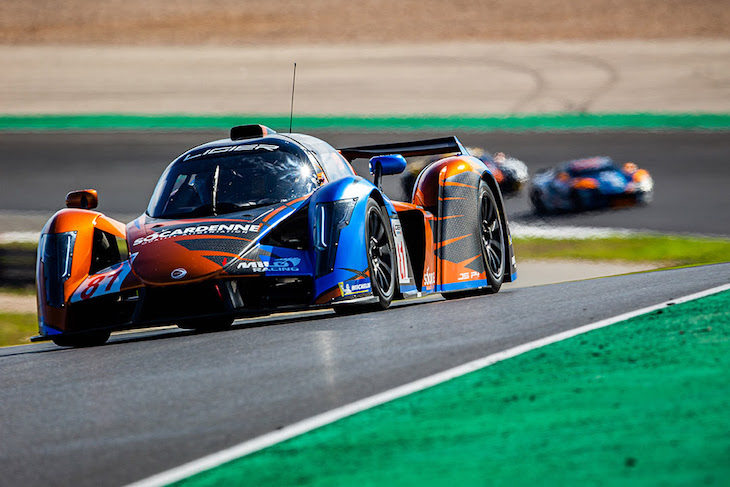 In Ligier JS2 R, Mathieu Martins in the #86 M Racing entry lined up on row one and the other driver from Yvan Muller’s team, Natan Bihel in the #66 car, who has the best chance to defeat Sébastien Baud in the championship, started from row two. The #17 Arctic Energy with Nerses Isaakyan was alongside. Sébastien Baud lined up fifth and shared row three with Claude Dégremont in the #30 CD Sport Ligier JS2 R.

Natan Bihel in the #66 got a lightening start to overtake Mathieu Martins in the #86 and immediately took command of the category. Sébastien Baud too put in a strong get away and moved to third place in the category in overtaking the #30 and #17 cars. The top three were covered by only a second. Neither the intervention of the safety car nor the pit stops really perturbed the leader who held on to the lead just until the chequered flag with the fastest lap of the race in 1:51.490s to boot. 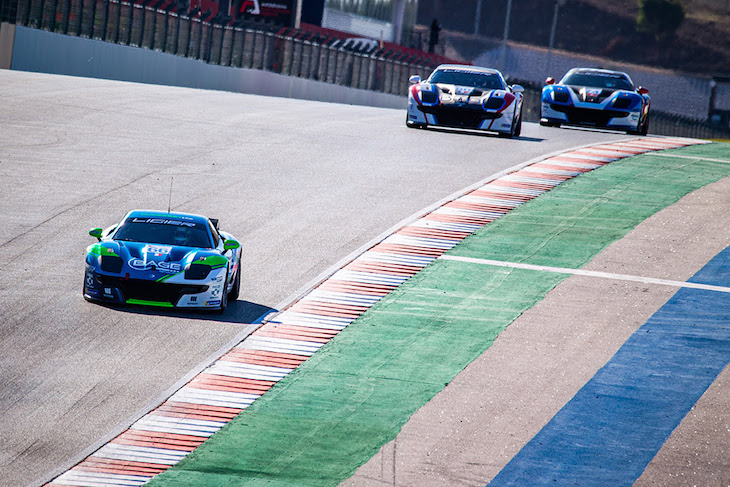 After the cycle of pit stops, Sébastien Baud in the #74 Cool Racing Ligier JS2 R moved up to second place at the expense of Mathieu Martins in the #66 M Racing car. The two drivers put on a spirited duel that was won by Mathieu Martins, and Sébastien Baud had to settle for third place, which gave him enough points to head to race 2 with peace of mind. He only needs to score one point, even in the case of a Natan Bihel victory.

Fourth place went to the car that started fourth on the grid, the #30 CD Sport entry with at the commands one of the few duos of this meeting, Claude Dégremont and Baptiste Berthelot, after they drove an error-free race. The #46 MV2S Racing Ligier JS2 R, in the hands of another tandem, Antoine Chapus and Gaëtan Essart, rounded out the top six in the category. 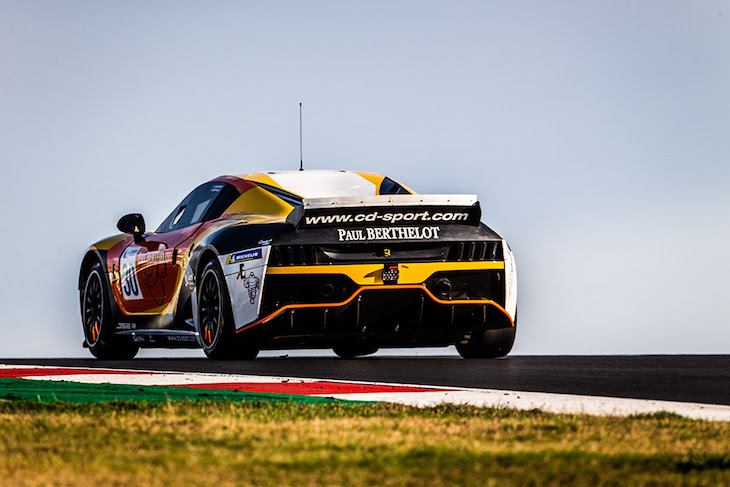 Behind the leading cars, several incidents or penalties disrupted the standings with heavy consequences for the #17 and #69 cars. Immobilised with a mechanical problem, the #17 Arctic Energy JS2 R of Russian drivers Nerses Isaakyan and Sergey Egorov was evacuated during a safety car period 15 minutes into the race, while it was closely following the three leaders. The father of Natan Bihel, Erwan was behind the wheel of the #69 M Racing car that had an off just prior to the end of the race and was also not classified.

The #38 HRC JS2 R driven by Julien Rodrigues started nineth on the grid, but received a drive-through penalty for jumping the start ahead of the #69 ahead of him on the grid, which was a shame for this newcomer because he went on to finish fifth in the category despite the sanction.

Bruno Chaudet in the #25 TM Evolution entry had moved up to fifth place in the category but was given a two-minute stop and go penalty for delaying his pits stop during the opening of the window. He finished nineth. The #11 of Alain Grand finished just behind in the sister car and was followed by Mikhaïl Makarovskii in the #45 MV2S Racing Ligier JS2 R.

After just two and half hours of respite the 13 Ligiers lined-up for race 2. 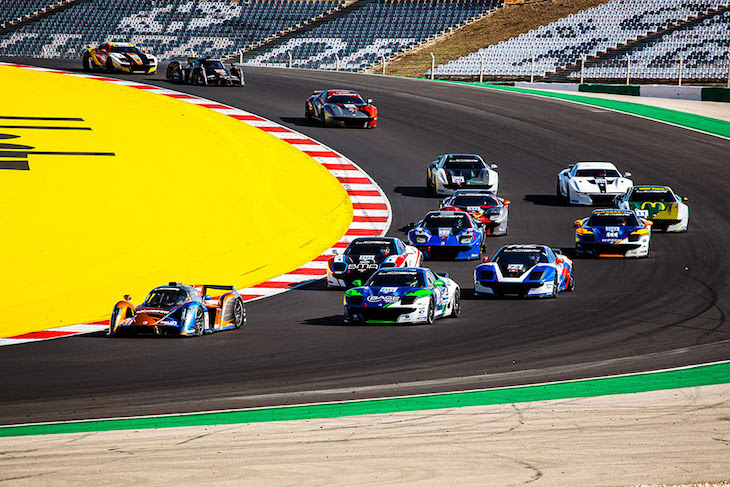 In the Ligier JS P4 category, the scenario from race 1 was at risk of repeating. On row one, Kévin Balthazar in the #81 Milo Racing prototype and in the second to last position, Andrea Dromedari in the #50 HP Racing Team machine, who had to move through the entire GT field.

It was the same story in Ligier JS2 R where the leading trio from race 1 was ready for the start: Natan Bihel in M Racing’s #66, Mathieu Martins in the #86 sister car and Sébastien Baud in the #74 Cool Racing entry. This time it was Mathieu Martins who jumped into the lead ahead of Natan Bihel, but a few minutes later Bihel retook the lead. Soon after, the first incident of the race involved the #46 of the MV2S Racing duo of Antoine Chapus and Gaëtan Essart and the #11 TM Evolution of Alain Grand who had a coming together. A sad ending for these two cars that shared row four at the start.

After a ten-minute neutralisation, the action resumed. There was nothing in it between the leading trio and the positions remained the same despite the pugnacity of the drivers. Nerses Isaakyan in the #17 Arctic Energy car was right behind in a solid fourth place while Baptiste Berthelot in the #30 CD Sport JS2 R and Julien Rodrigues in the #38 HRC GT battled for fifth. While the top four running order didn’t change after the pit stops, Julien Rodrigues got the better of Claude Dégremont, who took over in the #30, for fifth place. 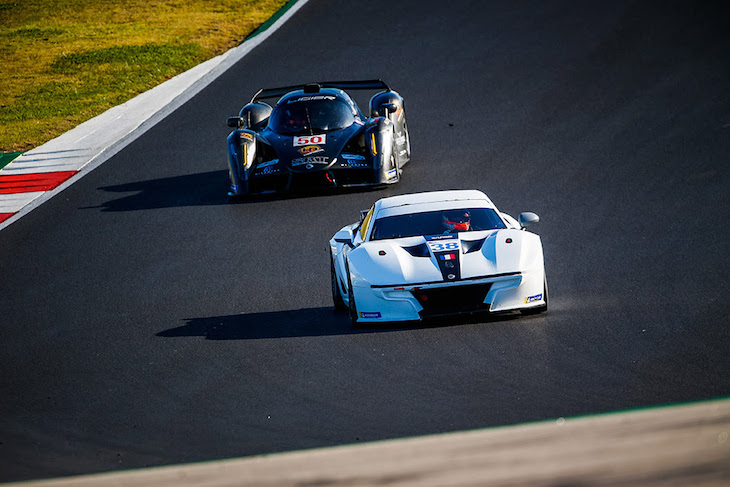 But in the final third of the race, there was a shake-up in the top four. Mathieu Martins took the lead and Nerses Isaakyan moved up to third place. It was game on in the battle for the lead between Mathieu Martins and Natan Bihel as they swapped positions several times just until the final lap and it was Mathieu Martins in the #86 taking the win in a thrilling finish, with the fastest lap of the race in 1:51.608s. 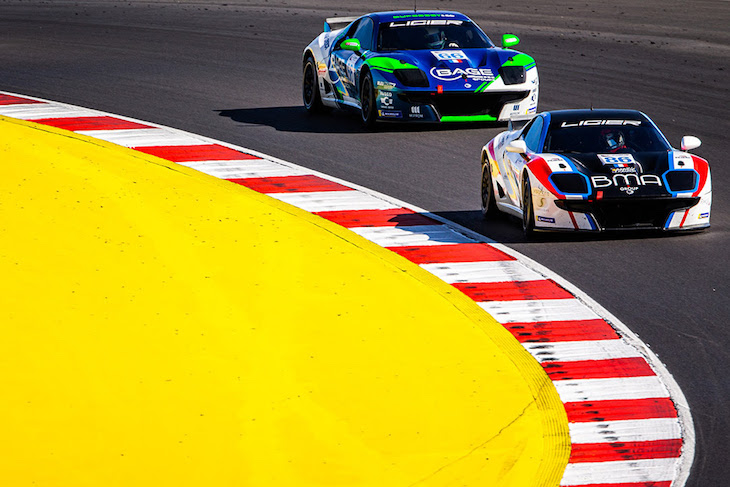 The fight for third place was just as intense with the outcome unknown just until the final lap when third place Nerses Isaakyan in the #17 Arctic Energy went off track and dropped to eight. Sébastien Baud in the #74 Cool Racing Ligier JS2 R inherited the third step of the podium and thanks to the points accumulated at the preceding rounds, he took a well-deserved category title. 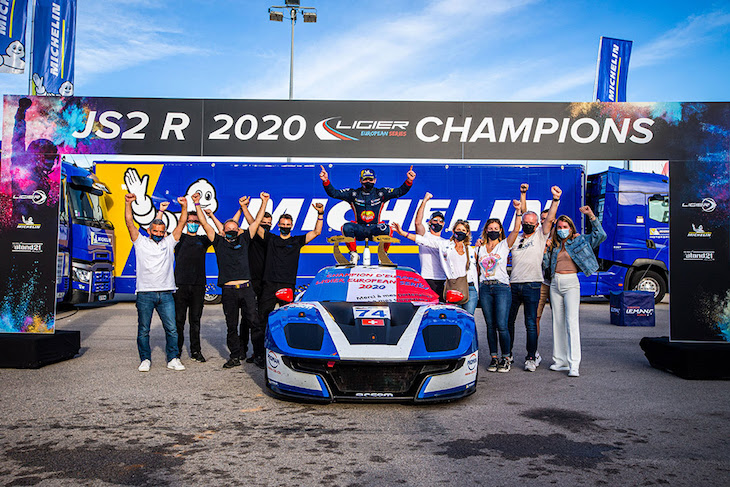 Julien Rodrigues in the #38 HRC car finished just off the podium in fourth place. Bruno Chaudet in the #25 TM Evolution entry completed the top five. The #30 CD Sport machine was given a drive-through penalty at the end of the race for track limits and came home sixth. Next it was Erwan Bihel in the #69 M Racing JS2 R, then Mikhaïl Makarovskii in the #45 from MV2S Racing that was unlucky and fell victim to mechanical issues.

In the sports prototype category, Andrea Dromedari in the #50 HP Racing Team Ligier JS P4 caught up to Kévin Balthazar in the #81 Milo Racing car in the final third of the race. He clinched the 2020 title by wisely finishing far behind his rival who posted the fastest lap of the race in 1:47.010s. 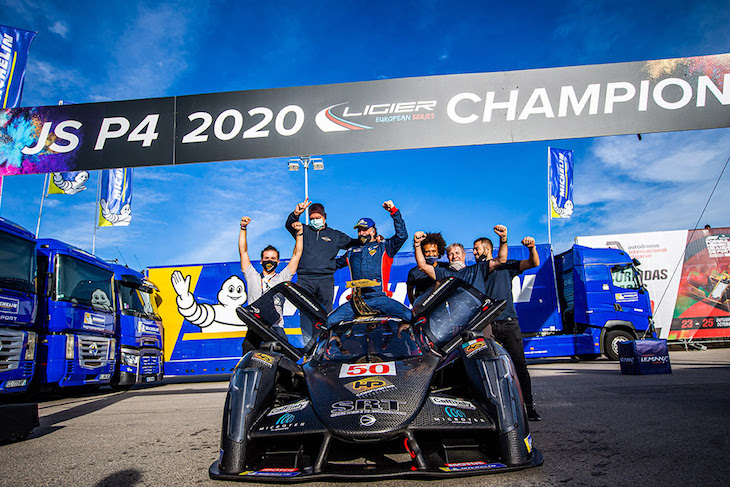 This finale saw the titles go to the two drivers largely in the lead of each category, despite the motivation and talent of their rivals and of all the competitors who have given us intense memories throughout this first season.

“It all came down to the start. I was on the same row as Mathieu, who had won the pole position, but with a tiny advantage: I set off from the inside. And I must have accelerated a half second earlier than him and right away I was in the lead. The goal was to try to build as big a gap as possible. It wasn’t easy because Mathieu was very fast. But I managed to keep him behind me the entire first stint and after the pit stop, I came out first. I then had to apply myself and make no mistakes, because he was pushing hard from behind. In race 2, he came back strong and we never stopped battling. It is a great way to end the season for me and for the team.” 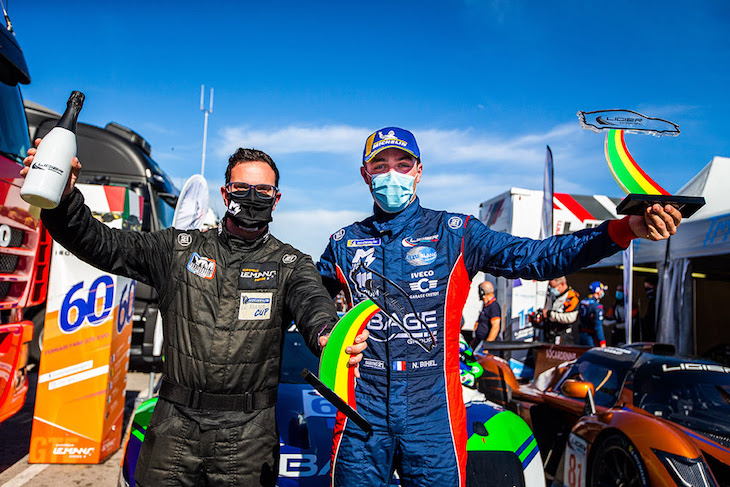 “With the two victories of today, I won 6 races this season. We missed one meeting so it was very difficult to fight for the championship. I’m very happy to finish the season on a high with two wins. It’s a fantastic result for me and the team. The Ligier JS P4 was great fun to drive all season and it’s a good way to start in sports prototypes before climbing the ladders of endurance racing”. 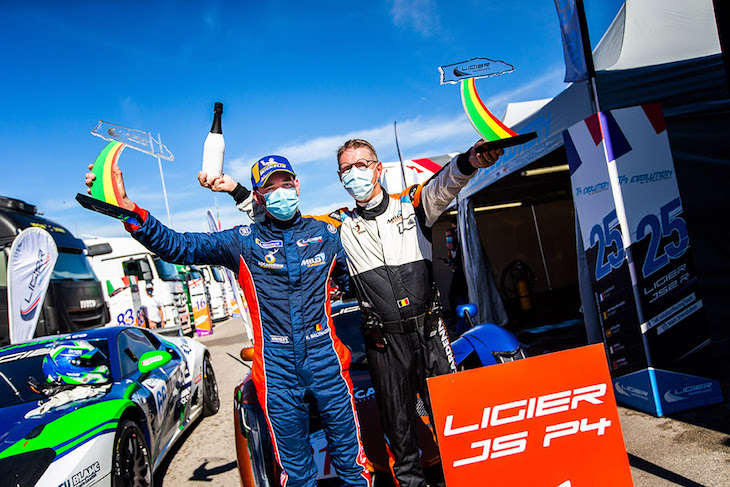 “Race 2 of this weekend was amazing. I had a great fight with my teammate Natan on the track. We battled hard but played it fair. I’m really happy to have won the race. It’s a great way to finish the season. I have learnt so much throughout the season with the Institut de Pilotage and M Racing. The Ligier JS2 R is great fun to drive and is great to learn the ropes of professional driving”. 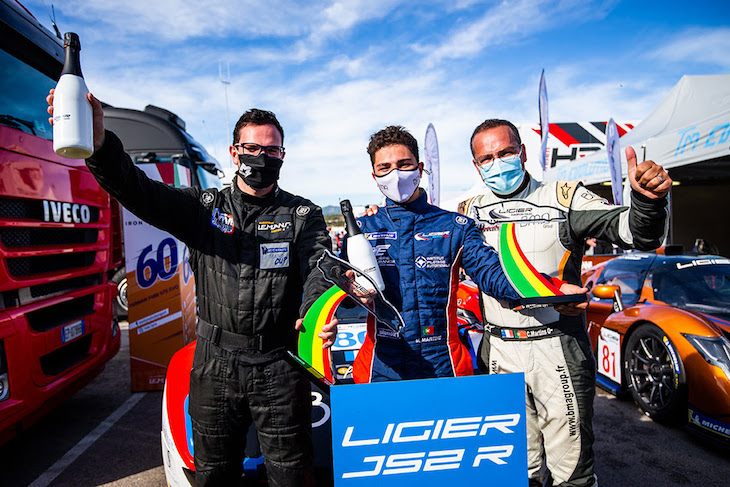