The 2020 Pirelli Super Taikyu Series headed to the Chugoku region this weekend, for the Super Taikyu 3 Hour Race in Okayama. Saturday’s on-track action included qualifying for both groups of cars, and was headlined by the 3-hour Group 1 race, featuring the ST-4 and ST-5 production categories.

Shinya Hosokawa started on pole in C.S.I Racing’s #310 GR Garage Mito Inter Toyota 86, but it was Katsuyuki Hiranaka in the #884 Hayashi Telempu Shade Racing 86 that got out of the gates strong, taking the lead going into the Hairpin Corner on Lap 1, and gradually opening up a lead to the rest of the field.

As Hosokawa tried to fend off past GT300 Champion Takamitsu Matsui in the #13 Endless Sports 86, the two made contact going into the First Corner on Lap 9, sending the white and orange Toyota into the gravel. A chance at three straight wins was gone for C.S.I Racing – the incident put them three laps down. Hosokawa, current Super GT premier class points leader Sho Tsuboi, and Rintaro Kubo would finish two laps down in 5th.

The white, green, and blue Shade Racing 86 held the lead after making its first pit stop after 45 laps, with Toyota factory driver Yuji Kunimoto taking over for the middle stint, ahead of fellow Toyota young lion Ritomo Miyata in the dark blue Endless 86. But as Kunimoto struggled for grip, Miyata was able to cut into his lead, and on Lap 59, Miyata passed Kunimoto at the Hairpin Corner to take the lead. Kunimoto pitted on Lap 65, changing two rear tyres and putting Keishi Ishikawa into the end.

The race turned after the Endless 86 made its second pit stop, when they were given a drive-through penalty for overtaking under yellows, putting Ishikawa in the Shade Racing 86 back out in front, where he remained for the rest of the race. 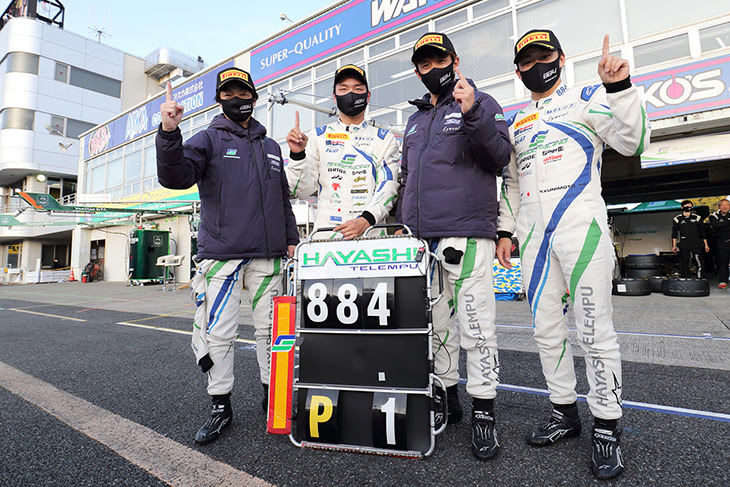 Completing 100 laps, the trio of Hiranaka, Kunimoto, and Ishikawa (accompanied by reserve driver Hiro Hayashi) took Hayashi Telempu Shade Racing’s first win of the season, one that will kickstart their chances at defending their ST-4 class crown.

“I think the fact that I was able to get past in the first lap helped the rest of the race,” said Hiranaka. “I had some luck, but I was able to defend my position, and I’m really happy because this was my first S-Tai victory in a while. I had been struggling with my race pace, so I’m really happy to have won this race. We are getting better and better, so I’m happy with the result – but I’m not going to be happy with just one victory, so I’ll do my best in these next races.“

“I was lucky, we won, but just barely,” said Ishikawa. “I was struggling with poor pace. Even though I changed the tires, my lap times didn’t improve as much as I expected, and I thought it was going to be tough to try and catch up, but then I got lucky when the [Endless 86] got a drive-through.”

The Endless 86 of Miyata and Matsui finished 2.8 seconds behind in 2nd place. 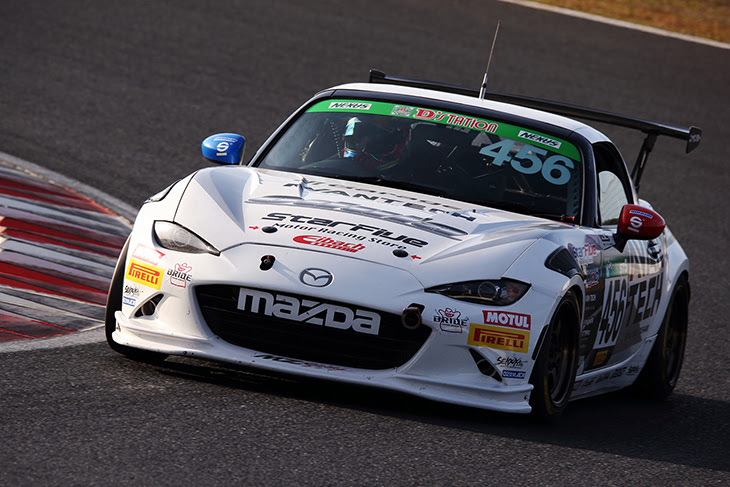 The battle between Hashimoto and Murakami came to an abrupt end with forty minutes remaining, however, when Murakami went off at Williams Corner (Turn 2) and crashed into the sponge barriers. Murakami was uninjured, but the orange Roadster was forced to retire. 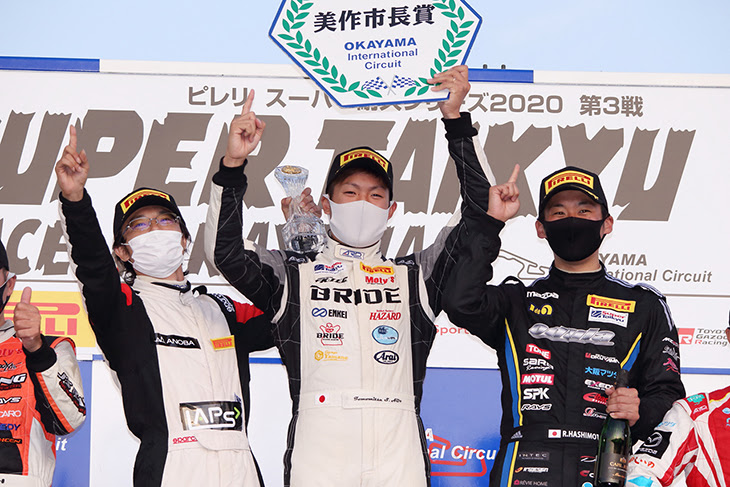 “At the end of my stint, I was running slower than I should have been, but I had only changed the front tires, so the rear tires were tough to deal with from the beginning of my stint,” said Hashimoto, who also won at Okayama last autumn, driving Over Drive’s #66 Roadster. “I was at my limit in the mid 52-second range. To be honest, if Murakami had pushed me to the end, we would have been in trouble too. We weren’t in a position to beat him, so we were lucky to be able to do so. This is the first time we’ve won with this team, but I won last year in Okayama, so this is the second time for me, which is very fortunate.”

With the #37 DXL Aragosta NOPRO Mazda Demio Diesel Turbo (Kaoru Ijiri/Kazunari Yoshioka/Yutaka Seki) finishing outside the points in 13th, the #69 J’s Racing crew moves into the lead of the ST-5 championship table, 62 points to 55, with three races completed.