The first hour of action was marred by a heavy accident less than ten minutes into the race involving Shinichi Takagi, driver of the #888 Mercedes-AMG GT3 for Team Hirix Racing. Takagi, 50, crashed head-on into the barriers at the Hairpin Corner (Turn 5), reportedly suffering from a brake failure as his car went into the barriers at nearly unabated speed.

Takagi was able to get out of his car under his own power, exiting from the passenger side door. He was brought to the circuit’s medical center, after complaining of pain in his neck and lower back. Soon after, Takagi was airlifted to nearby Okayama University Hospital, where as of Sunday, 8 PM JST, he will be given a further evaluation Monday morning.

After nearly twenty minutes under a Safety Car intervention, the race resumed from Lap 14, with Yuta Kamimura leading the field in the #16 Porsche Center Okazaki 911 GT3-R, aiming for two consecutive victories in two races. Satoshi Hoshino ran 2nd in the D’station Vantage, ahead of fellow gentleman drivers Joe Shindo in the #9 MP Racing Nissan GT-R GT3, and Noboyuki Oyagi in the returning #81 Daishin GTNET GT-R.

At the end of the first hour, the first round of pit stops had shuffled the order up a bit. Gentleman driver Hiroaki Nagai took over the #16 Porsche from Kamimura, which temporarily gave the lead to his younger brother Hideki Nagai in the #31 Denso Lexus RC F GT3. The #31 Lexus had actually made its first stop under the Safety Car intervention, swapping starter Koki Saga out for Nagai while the race was neutralized. On Lap 28, the D’station Vantage made its first stop, and Hoshino was relieved by Tomonobu Fujii, who immediately began to set a series of fast laps as he worked his way up through the field. And on Lap 40, Fujii made his move for the lead, getting past Nagai and the #31 Lexus. 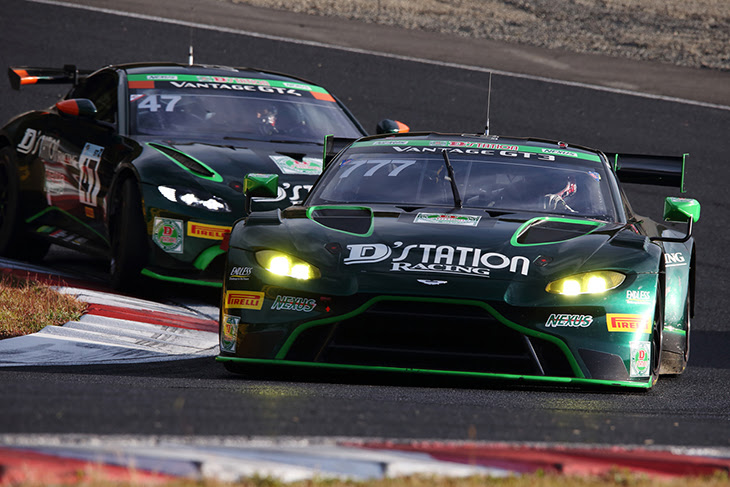 Within 20 minutes, Fujii had built up a lead of over 30 seconds to the rest of the ST-X class pack, and by Lap 70, his lead was up to over a minute. After meeting the maximum 72 minutes’ drive time for an STO Platinum driver, Fujii pitted that lap, and Kondo was installed for the final stint, where he came out behind the #9 MP Racing GT-R, now being driven by Yusaku Shibata.

Kondo re-emerged with the lead on Lap 79 after Shibata pitted and gave the final stint to former GT500 Champion Masami Kageyama, and having just captured his first Super GT victory a week ago at Suzuka, Kondo wouldn’t be denied a second straight win in as many different cars, circuits, and series. 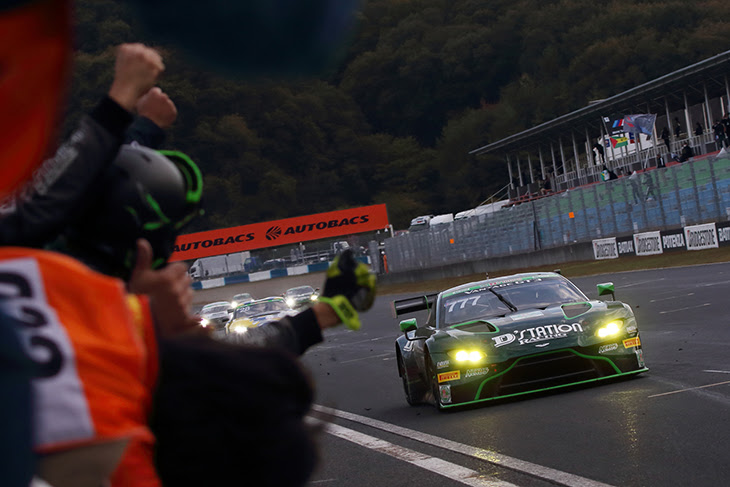 After opening the season with mechanical problems in the first two races, D’station Racing finally capture their first win of the season in the ST-X class – two wins in a row at Okayama, where they won the season finale in 2019 with this same trio of Hoshino, Fujii, and Kondo.

“The car was good this time, and I was feeling good from the start of the race,” said Fujii, who drove 42 laps during the middle stint – and had nothing but positive thoughts about his gentleman co-driver Hoshino’s performance at the start. “It wasn’t so much about trying to win the race, but rather, we had a different goal in mind. Normally, the plan would be for me to start the race and build up a margin over the field, but Hoshino-san wanted to take the start and challenge himself against the professional drivers.”

“Hoshino-san ran for 50 minutes at a good pace and came back, so myself and Kondo-san just had to drive the car in our own way to the end. This was the first time for Hoshino-san to start from pole position and he did a great job, so it was a very good race.” 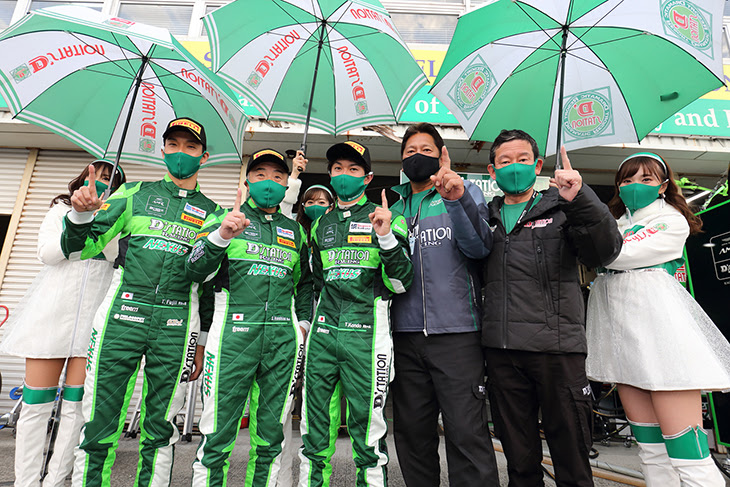 With strong driving from veteran Kazuki Hoshino and young Kiyoto Fujinami in the second and third stints, the orange #81 Daishin GT-R came home with a second-place finish overall, 42.785 seconds behind the D’station Vantage. It’s a strong comeback from the reigning two-time ST-X Champions at GTNET Motor Sports, who were forced to withdraw from the last round at Sugo after sustaining damage in a crash during the Fuji Super TEC 24 Hours.

The #9 MP Racing GT-R of Shindo, Shibata, and Kageyama finished in 3rd, 23.9 seconds behind their Nissan stablemates, for their second straight podium finish.

The #31 Denso RC-F of Hideki Nagai, Koki Saga, and Kazuto Kotaka finished one lap off the lead in 4th. This result means apr Racing remain second in the ST-X Championship, but are now just 5 points adrift of Mercedes-AMG Team Hirix Racing – who face an uphill battle to have a car ready in three weeks’ time for the 5 Hours of Motegi on 22 November. Porsche Center Okazaki, meanwhile, retired just five minutes short of the chequered flag, when Kamimura took the #16 Porsche to the garage after 104 laps. Instead of receiving points for a fifth-place finish, Hiroaki Nagai and Kamimura receive none for a retirement. 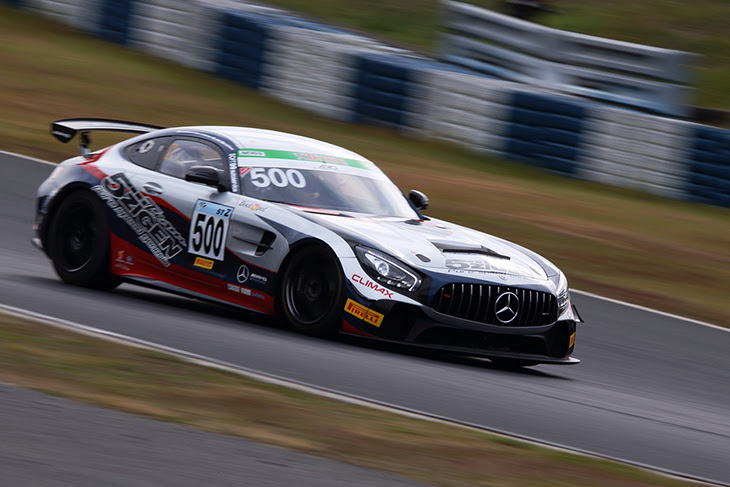 In the ST-Z class, the #500 5Zigen Mercedes-AMG GT4 of Ryuichiro Otsuka, Takayuki Aoki, and Yuya Sakamoto held on for its first win in the GT4 category, holding off the #47 D’station Aston Martin Vantage GT4 of Tatsuya Hoshino, Manabu Orido, and Kenji Hama by less than half a second over the line.

Even while carrying 50 kilogrammes of Success Ballast, the #3 Endless AMG GT4 of Hideki Yamauchi rocketed away from the rolling start, going from 3rd in class to the lead on a chaotic first lap that saw the #2 Syntium/K’s Frontier KTM X-Bow GT4 of Hiroki Katoh collide with the #20 SS/YZ with Studie BMW M4 GT4 of Takayuki Kinoshita, sending both cars into the gravel at Williams Corner (Turn 2).

The two leading Mercedes of Yamauchi and Aoki pitted under the Safety Car, handing the lead to the #23 TKRI Matsunaga Corporation AMG of Yuya Motojima. Motojima drove 55 laps up front in a blistering opening stint, but by Lap 64, when all of the front-runners had made their second routine pit stops, the #500 5Zigen AMG GT4 was back out in front, with clubman driver Ryuichiro Otsuka at the wheel from Lap 52 onward.

In the last hour, it was Manabu Orido in the #47 D’station Vantage GT4 who began to attack, lapping as many as 2 seconds per lap faster than Otsuka or Tsubasa Takahashi in the #3 Endless AMG. On Lap 97, Orido passed Takahashi for 2nd place, and began to chase down Otsuka – who knows his way around a GT4 car as a winner in the GT World Challenge Asia series. Orido kept closing in by about 1.5 seconds per lap, but Otsuka had just enough of a margin in hand to take the class victory by just 0.456 seconds, with 103 laps completed.

It is Team 5Zigen (“go-jigen”)’s first victory in the ST-Z class since debuting in last year’s season finale at Okayama, and for the second-placed D’station Vantage GT4, their second podium finish of the season. The #3 Endless AMG GT4 of Yuudai Uchida, Yamauchi, and Takahashi came home 3rd in class, 12.798 seconds off the lead, and building on their lead in the ST-Z Championship standings, which they now lead by 23 points over the #3 Endless Sports team in 2nd, and 26 points over Team 5Zigen in 3rd. 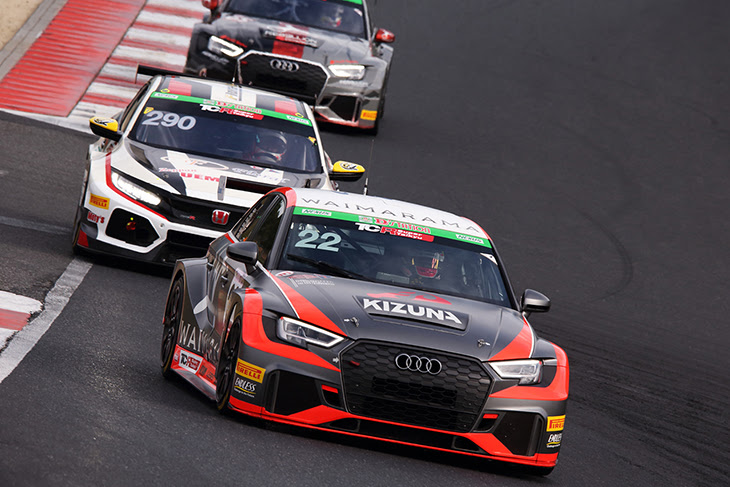 ST-TCR honours went to the #22 Waimarama Kizuna Audi RS3 LMS of “Kizuna”, Hironobu Yasuda, and Riki Okusa, who overcame the pole-winning #290 F-Link Home Honda Civic TCR (Tadao Uematsu/Yuji Ide/Shintaro Kawabata) early on in the race and held the lead from Lap 63 onward, after Okusa had taken the wheel for a 59-lap closing stint. Okusa held off Kawabata by 4 seconds, to take Waimarama Kizuna Racing’s second win of the season. The #65 Rebellion Mars RS3 LMS (Taketoshi Matsui/Masato Shimoyama/Yosuke Yamazaki) finished a further two laps back in 3rd. 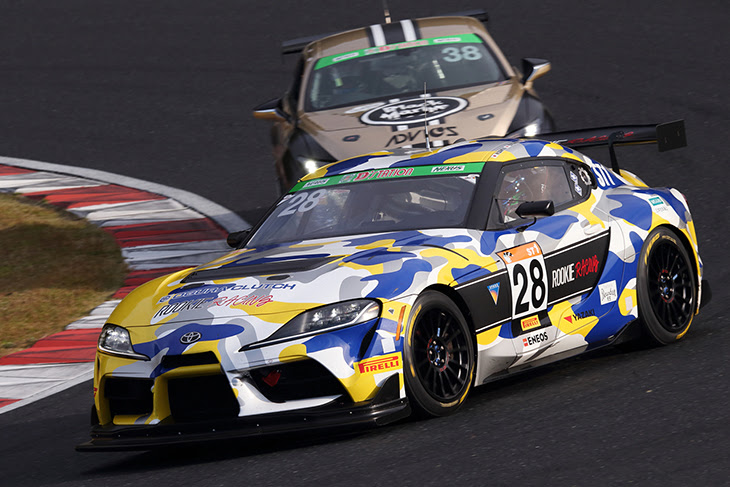 The #28 Rookie Racing Toyota GR Supra GT4 of Naoya Gamou, Daisuke Toyoda, and Yasuhiro Ogura took the ST-1 class victory, completing 101 laps, after a late incident from the #38 Advics muta Racing Lexus RC F (Makoto Hotta/Ryohei Sakaguchi/Yuui Tsutsumi) with 6 minutes remaining dropped them off the top spot. This allowed Toyoda to overrun a 15-second gap to Sakaguchi and drive on to their third ST-1 class victory of the season (including one uncontested victory at Sugo). 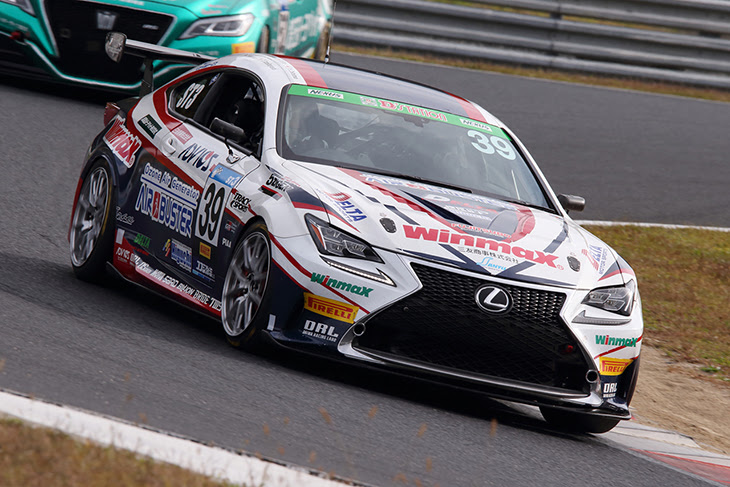 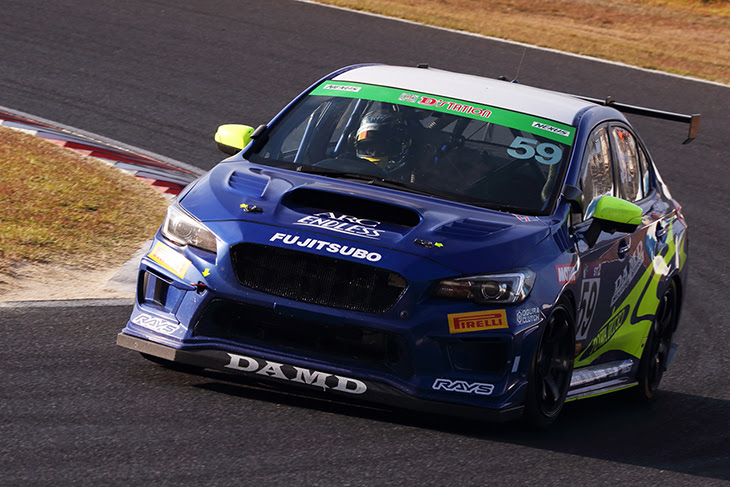