The #64 Modulo Honda NSX-GT of Takuya Izawa and Hiroki Otsu captured pole position for Sunday’s Fujimaki Group Motegi GT 300km Race at Twin Ring Motegi. It is the second pole position of the year for the team and for pole-winning driver Izawa, who led a Honda 1-2-3 in GT500 qualifying on Saturday.

As teams arrived on Friday, the last-minute driver changes from the week were made official. Kenta Yamashita replaced Nick Cassidy in the #37 KeePer TOM’s Toyota GR Supra, and Nobuharu Matsushita replaced Shinichi Takagi in the #55 ARTA Honda NSX GT3. Also, rookie Yuui Tsutsumi was named as a very late substitution in the #6 Advics muta Racing INGING Toyota MC86 – he replaces fellow rookie Kazuto Kotaka, who is sitting this race out after contracting a high fever over the weekend.

For this weekend, Success Ballast in GT500 has been reduced to 1 kilogramme per championship point, and now, all of the cars are back to the standard fuel flow rate of 95 kg per hour. And with fourteen of the fifteen GT500 cars covered by just six-tenths of a second, it would prove to be a difficult race to make the cut as one of the fastest eight cars in Q1. The Dunlop-clad #64 Modulo NSX showed its speed in Q1, as premier class rookie Otsu led the session by three-tenths over the #19 WedsSport GR Supra of Ritomo Miyata, who made Q2 for the fifth straight race.

The top five teams in the GT500 Drivers’ Championship came into this event separated by just two points, so the bonus championship point for Pole Position would have been valuable. Unfortunately, three of the top four teams missed the cut in Q1 by narrow margins. The #14 Wako’s 4CR GR Supra of Sho Tsuboi missed the cut by just 0.033 seconds, leaving Tsuboi and Kazuya Oshima 9th on the grid. The #17 Keihin NSX-GT of Bertrand Baguette was just another 0.024 seconds behind Tsuboi – Baguette and Koudai Tsukakoshi will start 10th. Yamashita, the reigning GT500 Champion, was expected to get up to speed quickly in his first Super GT race since the season opener at Fuji Speedway in July. However, he and Ryo Hirakawa will start 13th on Sunday, the #37 KeePer TOM’s Supra missing Q2 for the sixth time in a row – this time, by only three-tenths of a second.

The qualifying speed of the Modulo NSX didn’t diminish in Q2 either, in the closing minutes where the eight remaining cars had at least one flying lap to take pole position. Going for his 25th career pole, Yuji Tachikawa set the early benchmark with a 1’37.204 in his ZENT GR Supra. But veteran Izawa, who captured his first career GT500 pole in August at Suzuka Circuit, put in a blistering lap, going purple in every sector – and clocking in with a time of 1’36.140, for his second career pole position in Super GT. Izawa’s time was just six-tenths off the GT500 course record, set by his former co-driver Tomoki Nojiri in 2018.

In the post-qualifying press conference, Izawa remarked: “Our final time wasn’t very good in the official practice, but in Q1, Otsu-san ran a fantastic time attack to record the top time in the session. That put pressure on me, and our Team Manager [Satoru] Nakajima joked that I would be fired if I didn’t get pole position,” he said with a laugh.

“So, I went into Q2 with a positive amount of tension. I got my first pole position in Round 3, and getting a second one so soon after that is something that we owe to our car and our tyre suppliers. This is a car that anyone could have driven to a pole position, so it’s good that I didn’t make any mistakes and was able to get the top time. In tomorrow’s race it is about time for us to get a podium finish and hopefully the win. I’m going to do my best!” Indeed, Nakajima Racing will look to convert their qualifying speed into race pace, something they’ve not yet been able to fully realize all season. 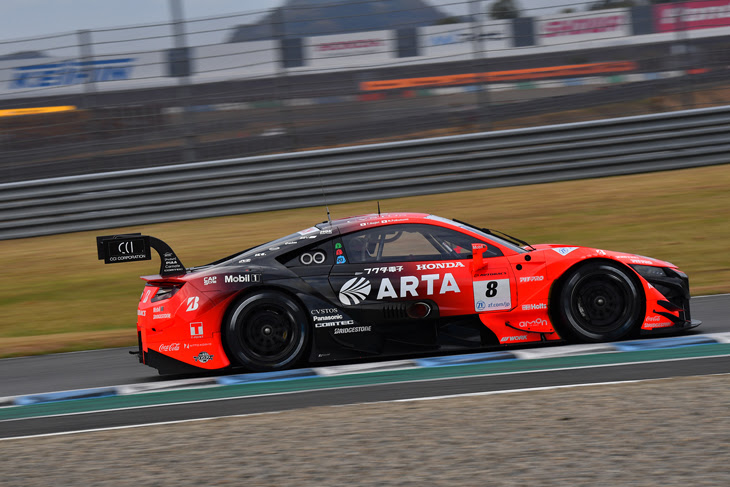 Honda locked out the front three spots on the grid, much to the delight of the many engineers and staff just up the road at the HRD Sakura facility. The battle for second on the grid came down to two Formula 2 alumni, Nirei Fukuzumi in the #8 ARTA NSX-GT, and Tadasuke Makino in the #100 Raybrig NSX-GT. Fukuzumi set the fastest final sector of all to put himself and Nojiri second on the grid in their ARTA NSX, ahead of the Raybrig NSX of Makino and Naoki Yamamoto in 3rd. It’s the fifth front-row start for ARTA, and the best qualifying result of the year for Team Kunimitsu.

The #23 Motul Autech Nissan GT-R (Tsugio Matsuda/Ronnie Quintarelli), winner last time out at Suzuka, qualified a strong 4th, ahead of the fastest Toyota, the #19 WedsSport Supra of Yuji Kunimoto and Miyata, in 5th. Tachikawa improved on his early benchmark, but not by enough for he and co-driver Ishiura to start better than 6th in the ZENT Supra. The #36 au TOM’s GR Supra (Yuhi Sekiguchi/Sacha Fenestraz) initially qualified 8th, behind the #3 CraftSports Motul GT-R (Kohei Hirate/Katsumasa Chiyo) in 7th. Both Fenestraz and Hirate had their fastest laps deleted, but the only impact was the two cars swapping positions, so now the au TOM’s Supra starts 7th, and the CraftSports GT-R starts 8th. 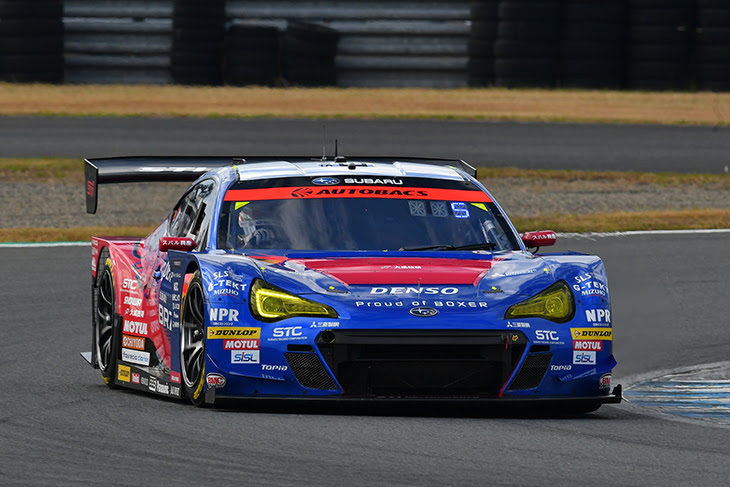 GT300 Pole Position was won by the #61 Subaru BRZ R&D Sport of Takuto Iguchi and Hideki Yamauchi, giving Dunlop Tyres a sweep of both pole positions. Iguchi and Yamauchi also earn a critical championship point to close in on the #65 LEON Pyramid Mercedes-AMG GT3 of Naoya Gamou and Togo Suganami, who missed Q2 for the second straight race and will start 20th.

Dunlop runners led all sessions of qualifying, in fact, with Iguchi leading Q1 Group A, and Yasuda leading Group B after his #11 Gainer GT-R was fastest in practice. There was another stunner in Q1 Group A, as Nissan customer minnows NILZZ Racing made Q2 for the first time all season thanks to a blistering lap from Ryuichiro Tomita, fresh off his excursion in the SRO GT World Challenge Europe. The #48 Shokumou/K’s Frontier GT-R was 2nd in its group in Q1, and am driver Yuki Tanaka ended up 16th in Q2.

Meanwhile, several other title contenders missed the cut in Q1. Both the #2 Syntium Apple Lotus Evora MC (Hiroki Katoh/Masataka Yanagida) and the #52 Saitama Toyopet GreenBrave Toyota GR Supra (Hiroki Yoshida/Kohta Kawaai) were left out, and will start 17th and 18th respectively, just ahead of the #35 arto Lexus RC F GT3 (Sean Walkinshaw/Mathias Beche), unlucky to miss out in 19th. Also, the most recent winners, the #21 Hitotsuyama Audi R8 LMS (Shintaro Kawabata/Tsubasa Kondo), will start 21st, behind the LEON AMG of Gamou & Suganami.

The final minutes of Q2 were a shootout between the #61 Subaru BRZ and the #11 Gainer GT-R for pole position. Hiranaka set his time first, a 1’46.433. Yamauchi, in the lighter Subaru, was gaining time in the first and second sectors. With a minute left, Yamauchi timed in with a 1’46.200. This was just three-tenths shy of Álex Palou’s pole-winning record time, set last November. It was enough to capture R&D Sport’s first pole position of the season, their first since September 2019 at Sportsland Sugo. 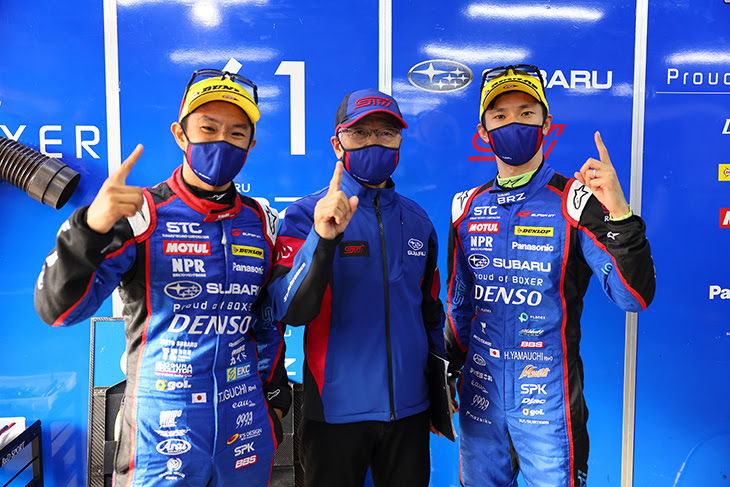 “I am so grateful to the Subaru fans and our team,” said Yamauchi. “After running in Q1, Iguchi-san gave me some good advice, and by trusting in his advice I was able to run well in my time attack. I think we owe this result to everyone involved. But the important thing is tomorrow’s race, so I’m not going to be satisfied with this pole but reset my mind to concentrate on that. In that race I am going to push aggressively and do the best I can.”

The other big story of GT300 Q2 was the performance of Max Racing and their #244 Takanoko-no-yu Lexus RC F GT3. Their car was written off during practice at Suzuka two weeks ago, so they’ve entered today’s race with a donor car, loaned to them by TRD. They’ve also added a new secondary sponsor for the occasion, Dogo Shirasagi Rent-a-Car, a luxury car rental company owned by Max Racing’s parent company Oono Associates. 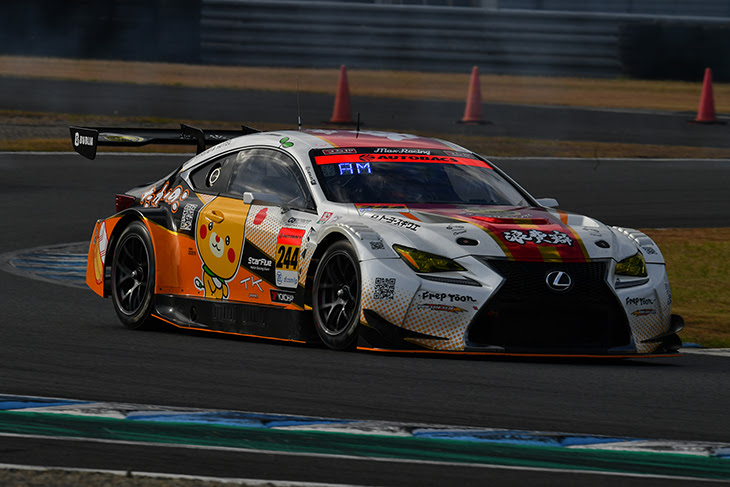 Rookie driver Atsushi Miyake just made it through to Q2 from a tough Q1 group, and Rintaro Kubo, eager to atone for his crash at Suzuka, qualified a career-best 2nd place, and gave Max Racing their best-ever start of their debut Super GT campaign, edging out the #11 Gainer GT-R of Hiranaka & Yasuda by just 0.033 seconds!

The #25 Hoppy Porsche 911 GT3-R (Takamitsu Matsui/Kimiya Sato) qualified 4th, their best since starting 2nd at Motegi back in September. The pole-winning car of that fourth round at Motegi, the #360 RunUp Rivaux GT-R (Takayuki Aoki/Takuya Otaki), was 5th, and making Q2 for the seventh straight race, the #31 Toyota GR Sport Prius PHV apr GT (Koki Saga/Yuhki Nakayama) was 6th.

After passing his rookie certification test in Practice, F2 veteran Matsushita was 12th fastest in Q2, putting him and Toshiki Oyu on the sixth row of the grid.