Fourth place in the final round at Oschersleben was enough for SSR Performance Porsche drivers Michael Ammermüller and Christian Engelhart to clinch their first ADAC GT Masters title.

The race itself was won from pole position by Philip Ellis and Raffaele Marciello in their Knaus-Team HTP-Winward Mercedes-AMG GT3. Second place went to the Team WRT Audi duo of Rolf Ineichen and Mirko Bortolotti ahead of Precote Herberth Motorsport Porsche’s Robert Renauer and Mathieu Jaminet. “Winning the title is a tremendously emotional experience for me,” said newly crowned champion Christian Engelhart.

“I wept tears of joy when Michael crossed the finish line, because I’ve always dreamed of winning the ADAC GT Masters. It’s unbelievable that we’ve actually done it.”

The battle for the title in the final race began in spectacular fashion. Several cars collided at the start on the main straight. The most prominent casualty was Kelvin van der Linde in the Rutronik Racing Audi, who had gone into the race second in the standings; he was obliged to retire his heavily damaged Audi R8 LMS after only a few seconds, the dream of successfully defending the title abruptly over for the South African and partner Patric Niederhauser.

The leader in the standings, Porsche driver Christian Engelhart, also had a fright on the first lap while lying in third place when a blow from Albert Costa Balboa’s GRT Grasser Racing Team Lamborghini sent him into a spin. He retrieved the situation, though, and was able to continue. Just a few seconds later, the race was red-flagged to facilitate the recovery of vehicles stranded on the pit straight. 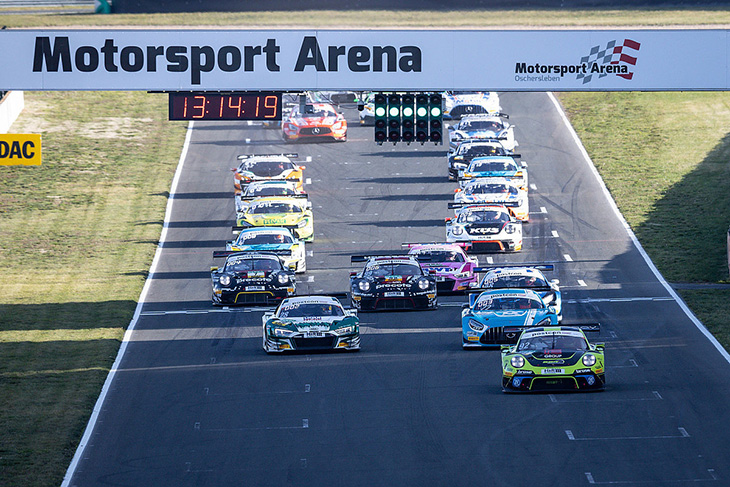 Pole-sitter Raffaele Marciello led the field after the restart but was under constant pressure from Audi driver Mirko Bortolotti until the pit window opened. Engelhart to their rear was running third. Marciello’s partner Philip Ellis rejoined the track in P1 and steadily pulled away from Rolf Ineichen, who had taken over from Bortolotti. Ellis eventually took the chequered flag with a 17.699-second lead. This was a maiden ADAC GT Masters victory for Marciello, while for Ellis it was his second after Oschersleben in 2018.

Bortolotti and Ineichen finished on the podium as runners-up for the second time this season. Ineichen chalked up his second victory of the weekend in the Pirelli Trophy classification. Third place went to Robert Renauer and Mathieu Jaminet after they had overtaken fellow Porsche drivers Ammermüller and Engelhart in the closing stages. P4 was still sufficient to hand the two SSR drivers their first title in the Super Sports Car League by a nine-point margin over runner-up Renauer. The new champions had the added satisfaction of knowing that SSR Performance had wrapped up the team classification.

Toksport WRT’s Luca Stolz and Maro Engel, who went into the race still in with a chance of winning the title, finished fifth and, as a result, ended the campaign third overall. Team Zakspeed BKK Mobil Oil Racing’s Mick Wishofer and Dorian Boccolacci in another Mercedes-AMG followed them across the line in sixth place. Wishofer also secured the win in the Pirelli Junior classification.

Team WRT Audi drivers Charles Weerts and Dries Vanthoor took P7 ahead of David Jahn and Jannes Fittje in their Küs Team75 Bernhard 911. Fittje just missed out on the Pirelli Junior title; this went to Lamborghini driver Tim Zimmermann despite his DNF after being wiped out at the start.

Rounding out the Top Ten were Indy Dontje and Maximilian Götz from Mann-Filter-Team HTP-Winward in a Mercedes-AMG GT3 Evo and the BWT Mücke Motorsport Audi pairing of Ricardo Feller and Stefan Mücke.

Comments from the Champions: 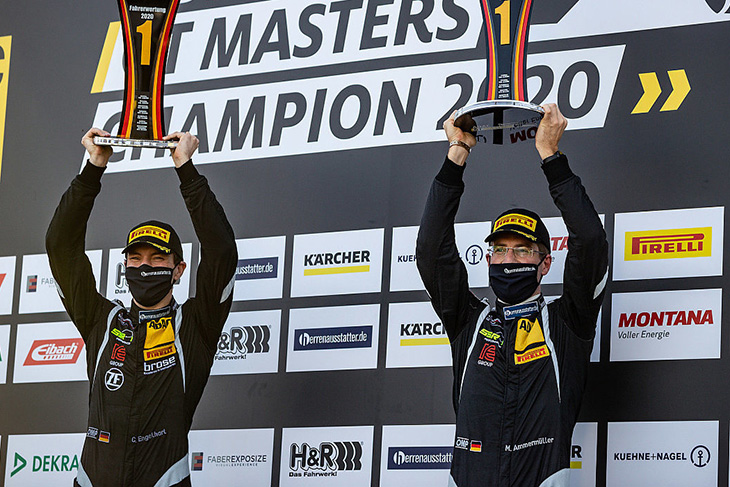 Michael Ammermüller: “SSR Performance have put together a great team in their first season. Team founder Stefan Schlund definitely chose the right people, which was the basic prerequisite of the success we’ve had. In Christian, I have a great team-mate at my side. We made hardly any mistakes over the whole season, and we can be really proud of what we’ve achieved.”

Christian Engelhart: “There was a lot going on at the start. I caught a blow, spun and lost a lot of positions as a result. Fortunately, the red flags came out at that point. At the restart, I had everything under control. I was nursing the tyres, so it wasn’t at all easy to keep up with the Audi in front of me.”

Comments from the race winners

Philip Ellis: “My race was relatively unspectacular. I managed to pull away from the Audi and then concentrated on finishing OK. It was important not to make any mistakes and to observe the track limits. Raffaele did most of the work, and I’m extremely grateful to him. We broke our run of bad luck yesterday and at last had a trouble-free weekend.”

Raffaele Marciello: “I had a great start and then got into an enjoyable scrap with Mirko [Bortolotti]. Because overtaking is so difficult at Oschersleben, we were able to defend our position at the front and bring home the victory today. We had a flawless weekend without major incidents or controversial situations. The key to success was a trouble-free race weekend.”