The first hour saw a neat and tidy start transition seamlessly into multiple on-track incidents, the spun #66 Team Parker Racing car clipped by a passing car leading to terminal damage for the AMG GT4. That came after a moment for the #26 Aston Martin where the GT3 car ran wide and took itself, and the luckless #17 off into the gravel.

The Safety car was scrambled as the gravel bound pair were recovered and the remains of the AMG were craned away to the graveyard of broken racing dreams. That saw almost all the major runners opt to pit and burn one of their three mandatory driver change stops, storing up strategy for later like an opportunistic group of squirrels in a park full of dog walkers. It all came after an excellent start from the World’s Fastest Racer, no, not Jenson Button, but James Baldwin in the full-season Jenson Team Rocket RJN McLaren, up from fourth on the grid to second by the exit of the first corner, he would lead for a lap or two as the pole-sitting Barwell Lamborghini of Rob Collard led the early pit stoppers in. 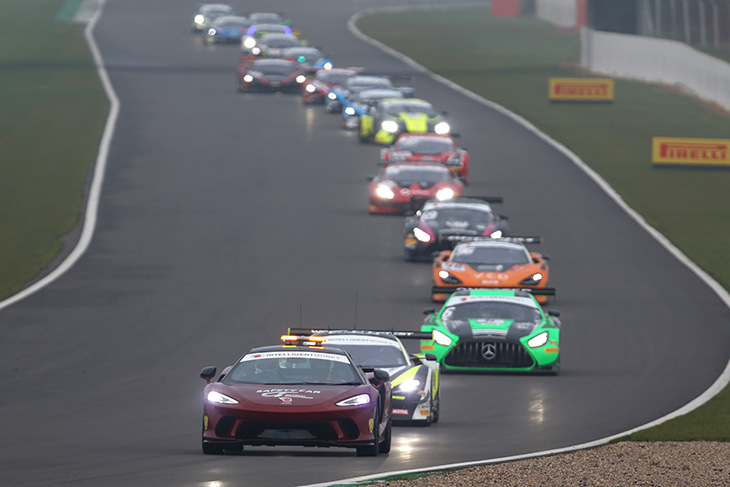 With most leading runners opting to stop at some point under the Safety Car that left John Dhillon leading for a while in the #13 GTC class Ferrari, when the race went back to green, somewhat lacking in aero grip in the turns the Ferrari was soon under pressure from a pair of Barwell Lamborghinis, Sandy Mitchell would lead but was under pressure from Phil Keen. The GTC Ferrari would tumble back down the order as the GT3s got back up to speed, sadly a process the was not without incident, or indeed incidents as the #13 tangled first with a somewhat ambitious #10 2Seas Mclaren, the 720S GT3 half spinning onto the grass before rejoining, and then a lap later with Mark Crader on the #68 Optimum McLaren, the GT3 car again coming off the worse.

Also in trouble was the #61 Academy Motorsport Mustang, the car on the dollies and into the garage. Soon afterwards the #23 Supra GT4 pitted with significant bodywork damage on the left side of the car, it would receive a 10 second stop-go, as yet unexplained.

GT4 saw James Dorlin lead the way, post Safety Car, the Newbridge Aston Matin having opted not to stop under the Safety Car.  The decision to do so would have further consequences for the title-contending TF Sport Vantages, both dealt with drive-through penalties after passing the pit exit light at red, that would drop the pair down the order, later recovering by the top of the second hour to 3rd (#95) and 4th.

There were drive-throughs too for the #38 TF Sport Aston Martin and the #8 ABBA AMG, both for start infringements it seems.

With all of that on the board the race for the win came down in the latter part off the second hour to Rob Collard, eventually finding his way past a stoic Ian Loggie, the #78 pulling away from the #6 RAM Racing AMG GT3 the AMG dropping back into the clutches of a charging pair of Optimum Mclarens, Brendan Iribe impressive again in the #77 720S GT3, catching the AMG and fending off Lewis Proctor in the team #96 car. 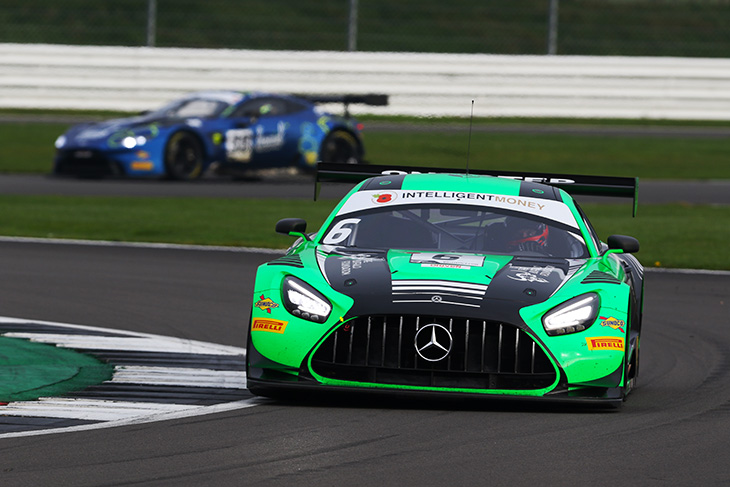 As the lead change had taken place there was drama behind with a clash between title contenders Sam de Haan and Adam Balon, the #72 Lamborghini of Balon turned around and delayed in rejoining after a clip to the rear by Balon’s #69 RAM Mercedes, opinions of onlookers divided, Race Control was more certain, it would be a 10 second stop/ go for the AMG man.

As that was called there as a change in the leading group, Collard now over 7 seconds clear but behind it was now Proctor in third and pushing Loggie hard, Iribe tucked in behind with James Baldwin also now closing in fast!  Soon enough Loggie’s mirrors were full of the McLaren 2160 GT9 combo!

Proctor made the move, out-braking the AMG into Stowe and pulling away, but what was left in the bank for a battle with the leader?

GT4 meanwhile, saw the Newbridge Aston still with a healthy lead but on an entirely different strategy to the chasers. Of the rest Rob Wheldon was storming along in the #42 Century BMW M4 GT4, with Jordan Collard looking to make it a banner day at the Collard house, third on the road in the #58 HHC McLaren, ahead of the recovering pair of TF Aston Martins with the #97 in the hands of Daniel Vaughan ahead of the #95 of Connor O’Brien. 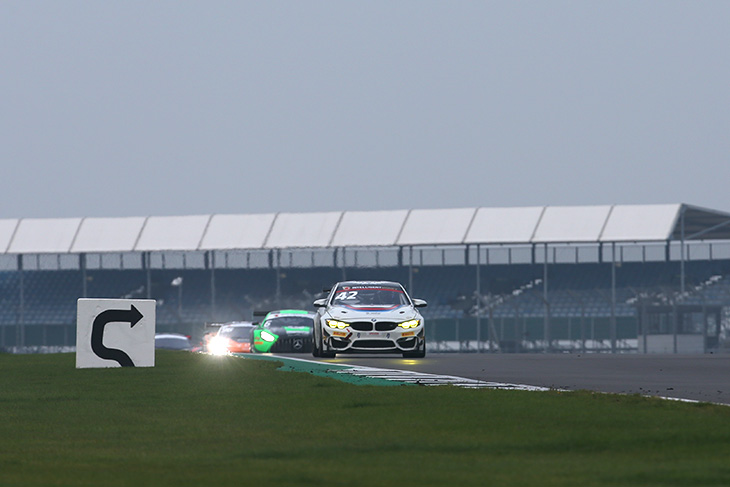 Under 50 minutes and James Baldwin was the first of the leading group to make his final mandatory stop as Iribe was shaping up to pass.

Two more laps of that and the American made a big mistake, and then pulled off the ‘save’ of the season, the McLaren running wide, two wheels on the grass, then spearing left, great car control keeping the Mclaren out of the barrier to retain his fourth place, but losing some 15 seconds.

40 minutes to go and the final stops were coming thick and fast, Balon in from 7th, title chances surely gone, Phil Keen would rejoin in 12th.

de Haan was now fifth after taking the drive-through but needing to stop again.

The #96 Optimum McLaren was next in, Ollie Wilkinson aboard and looking for a way past now second-placed Ian Loggie but trying way, WAY too hard, running across the kerbs going onto  the Wellington straight, sideswiping the AMG and looping the 720, the car left facing the wrong way and taking time to get back into the fight. It would be a 10 second stop/ go penalty for the #96 too for causing the collision. 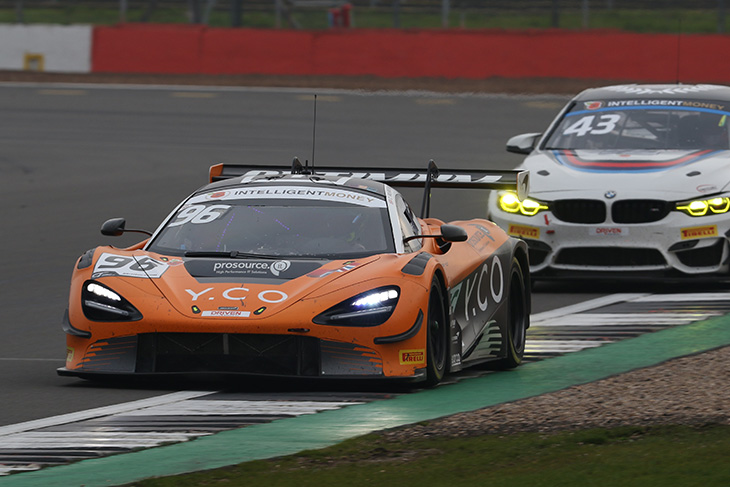 Michael O’ Brien was aboard the #2 Rocket/ RJN McLaren, running 4th, the final pit stop complete, and he too was looking to un-lap himself from second-placed Loggie who, with 30 minutes remaining, still needed to pit.

Rob Collard though by now had a 17-second edge on Loggie, who had a recovering Iribe getting larger in his mirrors again!

26 minutes and the final flurry of leading pitstops was triggered, #6 and #77 pitted together, Yelmer Buurman in the AMG, Ollie Millroy in the McLaren.

Then it was the leaders turn, Rob Collard handing over a healthy lead to Sandy Mitchell – or was he?

As the #78 emerged from the pits the blazing headlamps of a fast closing #2 McLaren were right there, nose to tale stuff for the win with 24 minutes remaining, Michael O’Brioen’s pace had opened up the race once again. 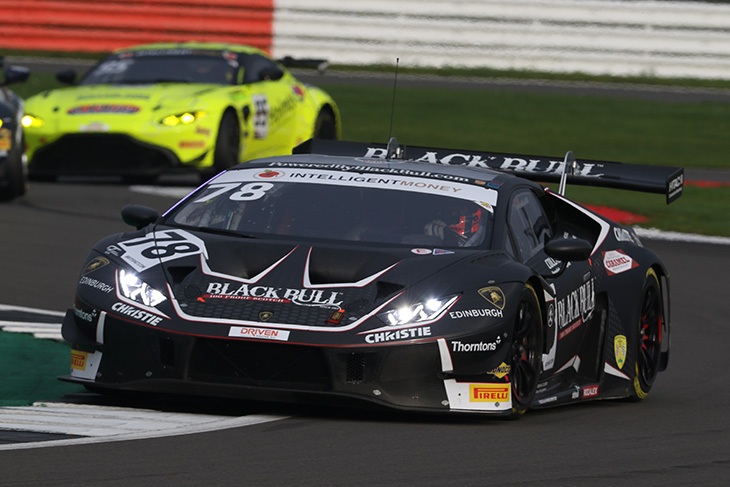 Behind, Millroy had emerged ahead of Buurman, they too were nose to tail, 15 seconds back from the lead pair.

Two of the trouble-magnets of the race, finally found each other in the final 40 minutes, contact between the #13 GTC Ferrari (Dhillon) and the #38 TF Sport Aston Martin (Petrobelli) leaving there 488 crabbing slowly back to the pits.

Next to hit trouble was Ollie Millroy, clattering a kerb in the #77 Mclaren whilst fending off Buurman, the #720S stopping soon afterwards and taking almost a full minute before getting back up to speed, he’d drop to seventh, Buurman up to second.

The Championship situation was all about whether the #78 could come home now, O’Brien’s challenge fading a little and the points situation either way in the Lamborghini’s favour.

There were no further dramas and the Lamborghini pair came home deserved winners and Champions.

Behind, Buurman would come home second, a result that secured the GT3 Pro-Am championship for himself and Ian Loggie in the RAM Racing AMG.

Michael O’Brien would come home a fighting third for himself and James Baldwin, a mightily impressive season for the pairing.

Further back Phil Keen hadn’t got the “It’s hopeless” memo and was pushing very, very hard, back into the top 10 and closing on Kujala ahead, he would come home in ninth, ahead of Sennan Fielding who won a three-way late-race battle to claim tenth in the #30 Steller Motorsport Audi he shares with Richard Williams.

A recovered Millroy would make it home a disappointing seventh with Brendan Iribe, fending off a challenge from the #69 RAM Racing AMG of San de Haan and Patrick Kujala. 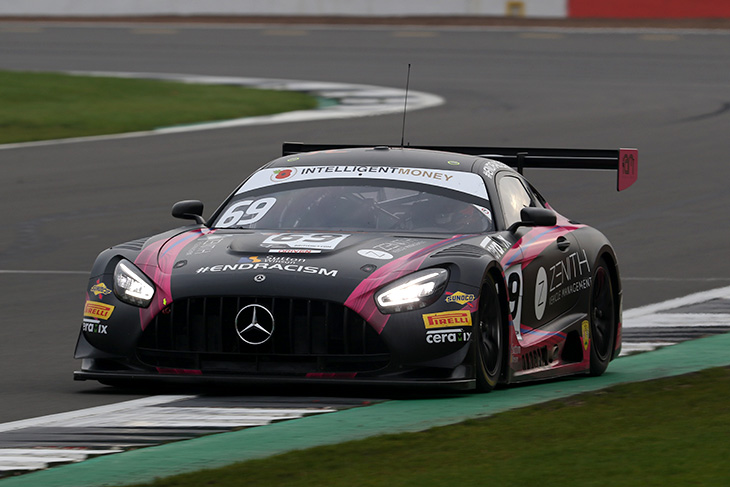 A two-car train of 2 Seas McLarens would see the #11 720S GT3 of Martin Kodric and Faisal Al Zubair and the sister #9 car of Dean Macdonald and Angus Fender home 4th and 5th ahead of the #18 WPI Lamborghini, Andrea Caldarelli and Michael Igoe running a quiet but effective race.

The GT4 battle would come into focus in the final 20 minutes with the challenge of the Newbridge Aston Martin fading as their off-base strategy fails to pay off, the #98 would come home 6th.

5th would be the #57 HHC McLaren something of a non-mans land between the #98 and a battling group ahead.

The race would be won, and won convincingly, by the #42 Century BMW M4 GT4 of Andrew Gordon-Colebrooke and Rob Wheldon after a rapid and error-free effort, Wheldon bringing home a second winning effort in consecutive weekends after success in the ELMS in LMP3 at Portimao last weekend!

The Championship though would be won in the group behind and would change hands in the final minutes which saw the pair of TF Sport Aston Martins chasing down, catching, and passing the Championship contending #58 HHC McLaren, Patric Mathiesen unable to fend off the charge from the Championship-leading #97 car, Jamie Caroline going by to claim second place in the race and the win in the Championship together with Daniel Vaughan, the move robbing the history books of a father and son double Championship in GT3 and GT4, overall Champ Rob Collard’s son Jordan the other half of the #58 crew. 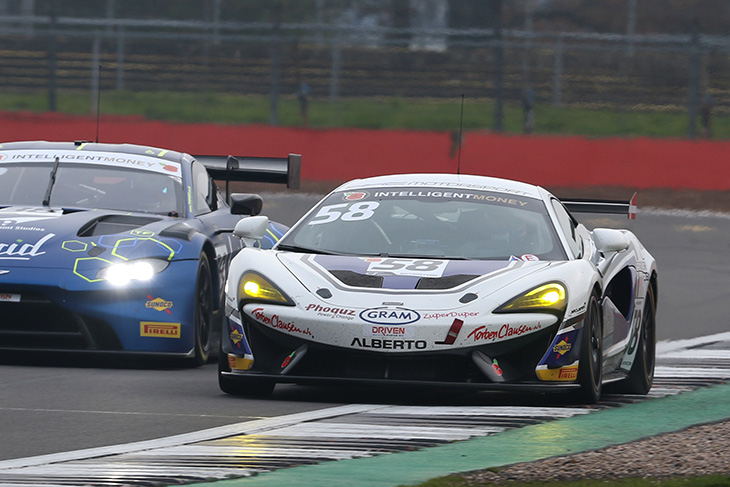 There would be no consolation podium either for the McLaren pair as the second, #95 TF Sport Aston also managed to go by for third on the road for Connor O’Brien and Patrick Kibble.

GTC saw more than one of the rapid Ferraris hit trouble, the #16 Team Parker Racing Porsche of Justin Armstrong and Ryan Ratcliffe taking the win ahead of the #15 FF Corse Ferrari of Jamie Stanley and Laurent de Meeus. The #13 Scott Sport Ferrari of Phil Quaife and John Dhillon survived multiple contacts to complete the class podium.

The undoubted ‘Star Car’ of the meeting, the #3 Jenson Team Rocket RJN McLaren for Jenson Button and Chris Buncombe came home 14th, the car clearly not on song, the team running the very first McLaren development GT3 car, both Button and Buncombe reporting from the off that the car lacked more than just a little something.