Tyler McQuarrie secured the third-straight pole position for the #39 Carbahn w/ Peregrine Racing Audi R8 with a time of 2:10.744, nearly one-second quicker than the rest of the field. The team enters the final race of the season fifteen points behind the championship-leading pair of Nate Stacy and Kyle Marcelli, though.

“Our car is really good here at Sebring. We’ve won here two years in a row, that’s the second pole in a row here and we’ve had three poles in a row in the last three races. I think we’ve just hit our stride at the end of the year, and we’re really putting everything out on the table to try and win the championship,” McQuarrie said.

The laps from Lawrence and Signoretti put two non-full season drivers in the top three. This is Lawrence’s first race of the season and Signoretti’s first since the Rolex 24 at Daytona earlier in the season. Signoretti is the fourth different co-driver Seb Priaulx has had this season, joining Scott Maxwell, Hailie Deegan. And Austin Cindric.

The #60 KOHR Motorsports Aston Martin Vantage that leads the championship qualified in fourth and will look to keep the #39 Audi within reach to protect their championship lead. 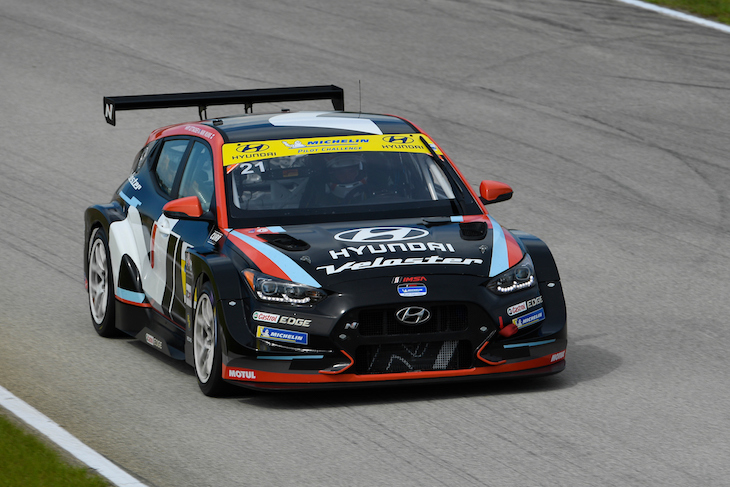 “It’s a good start to the weekend, for sure, but it’s not over yet,” Gottsacker said. “There’s a long one tomorrow. Really thankful for Bryan Herta Autosport and everybody at Hyundai [for] giving me such a great race car today. Me and my engineer Hunter really kind of nailed that setup and it worked out really great for us.”

Roy Block in the #5 KMW Motorsports Alfa Romeo Giulietta was third. The Audi RS3 LMS entries and the pair of Honda Civic TCRs lacked the pace needed to seriously challenge the onslaught that was six Hyundai Veloster N entries.