The #91 Porsche 991 GT3 R, which started from the second row of the grid, has been locked in a fight for the lead with its sister Porsche 911 GT3 R (#92, Robert Renauer / Alfred Renauer / Max Edelhof / Vincent Kolb) and the CP Racing Mercedes-AMG GT3 Evo (#85, Charles Putman / Charles Espenlaub / Joe Foster / Shane Lewis) from the opening lap onwards, and has now completed 147 laps of the 5.245km Autodromo Internazionale del Mugello in the process. 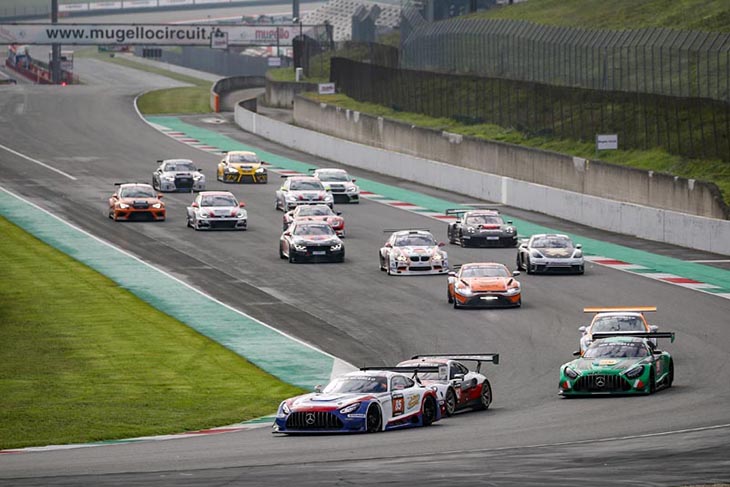 After five hours of running, the second Herberth Motorsport Porsche is now 2nd, just 42 seconds adrift of the leader. CP Racing, which secured its first outright 24H SERIES pole position earlier this morning courtesy of Charles Espenlaub, was only a further 10 seconds behind at the flag. Notably, that means the trio will start the second half of the Hankook 12H MUGELLO tomorrow morning on the same lap.

This is particularly significant to Herberth Motorsport, as the #92 and #91 Porsches are in contention for the Overall GT Teams’ championships in the 24H SERIES Europe and the 24H SERIES Continents title hunts respectively.

Though the Belgian team ran as high as 4th in the early going, the Speed Lover Porsche 991-II Cup (#978, Eric Mouez / Olivier Dons / Jürgen van Hover) has now dropped to 7th in the GT division, but retains the 991 class lead at the Hankook 12H MUGELLO. Speed Lover is also a championship contender in the 24H SERIES Continents.

Having qualified on GT4-class pole position, the EBIMOTORS Porsche 718 Cayman GT4 CS MR (#473, Alessandro Cutrera / L.M.D.V. / Marco Talarico / Marco Frezza), currently 3rd in the GT4 class, has now slipped back to 8th overall in the GT division, just ahead of the RD Signs racing team Lamborghini Huracán Super Trofeo (#720, Audrius Butkevicius / Egidijus Gutaravicius / Arturs Batraks / Martynas Griska). The latter qualified an impressive 5th on its series debut but immediately dropped 11 laps behind when Arturs Batraks went off into the tyre barriers on the way to the grid.

The #112 Volkswagen, having started from the front row of the TCE grid, has run comfortably among the frontrunners since the early going and has now completed 136 laps of the 5.245km Autodromo Internazionale del Mugello. Autorama Motorsport by Wolf-Power Racing currently holds a one-point advantage in the 24H SERIES Continents standings, and, significantly, will take tomorrow’s restart one lap ahead of its nearest rivals.

The team’s closest championship rival, the AC Motorsport Audi RS3 LMS (#188, Stéphane Perrin / Mathieu Detry / James Kaye), was in the lead heading into the closing stages but has now dropped back to 5th in the TCE division after making a late-race splash and dash for fuel.

The JR Motorsport BMW M3 E92 (#703, Ted van Vliet / Oscar Graper), having secured its second consecutive TCE pole position in the 24H SERIES, held the lead during the opening stages of the race, but lost time in the pits during the second Code 60 caution period. The Dutch team and has now dropped to 6th in the TCE division but continues to hold the TCX class lead.

After a commanding opening stint by Guillame Roman, and despite a spin at turn nine early on, the Nordschleife Racing Ligier JS2 R (#226, Guillaume Roman / Daniel Waszczinski / Mathieu Sentis) lies 2nd in the TCX class and 7th overall in the TCE division.

Early podium contender Red Camel-Jordans.nl meanwhile (#101, Ivo Breukers / Luc Breukers) lost more than 45 minutes to a broken wheel strut and the CUPRA TCR has now dropped to the tail of the field.