The LMP1 Hybrid Era ended in Bahrain with just the pair of factory-entered Toyota Gazoo Racing TS050s to mark the occasion, the pair put on a display not of close racing, but of faultless pace and reliability.

The numbers meant that the winner of the race between the two Toyotas would take home the FIA World Endurance Drivers Championship and it was clear from the off that the crew of the #7 Toyota had an advantage that likely exceeded even the 0.54 seconds per lap dealt out by the FIA WEC’s success handicap system, brought into the LMP1 class for the final season to allow the non-hybrid powered privateer LMP1s to compete for wins.

The two Toyota crews were given free rein by the factory team, already in possession of the coveted team’s World Championship, to run their own strategies and, put simply, the #7 crew did the better job, pulling away from the sister car rapidly and building up a full half a lap advantage before a mid-race Safety car to allow a clear up of debris on the start/ finish straight closed the gap back up, the only drama otherwise for the #7 a broken wiper blade!

When the race went back to green flag running the #7 pulled away again and, aside from a brief challenge from Sebastien Buemi on new rubber in the #8, the lead and the win never looked threatened. With the race ending in full darkness under the Bahrain floodlights, Kamui Kobayashi brought the car home over a minute clear from fellow Japanese driver Kazuki Nakajima, Kobayashi, Mike Conway and Jose Maria Lopez the new World Champions, three-time WTCC World Champ Lopez joining Fernando Alonso and Petter Solberg on the very short list of drivers to have claimed FIA World Championships in more than one discipline of the sport!

Aston Martin Racing’s Nicki Thiim and Marco Sorensen took the FIA World Endurance GT Drivers Championship despite having not been in contention for a podium place for much of the 8-hour race and despite all four Aston Martins in the race requiring un-programmed brake pad changes.

The Danish pair’s #95 Aston Martin Vantage GTE came into the Bahrain race with a points lead but with two other runners still able to overhaul their advantage.

Their nearest challenger was Maxime Martin in the sister #97 Aston Martin whose full season co-driver Alex Lynn was counted out fo the race after testing positive for COVID-19 in the week before the event. Lynn was replaced at late notice by ex-Porsche, Corvette and Chip Ganassi Ford factory driver Richard Westbrook who joined the Aston Martin team at Le Mans in September.

That effort too had their challenge blunted by the braking issue, dropping the car out of contention for both a win and a podium that saw the whole GTE Pro field separated by around 12 seconds until problems struck the #95 Aston Martin and the third title contender, this the #51 AF Corse Ferrari 488 GTE with title contender and 2017 World Champion James Calado joined by double Le Mans 24 Hours GTE Pro Champion, Brazilian Daniel Serra, Calado too without his otherwise full-season team-mate, Italian Ferrari factory driver Alessandro Pier Guidi re-purposed in a packed weekend for endurance racing as one of the Italian factory’s key players in an assault on the season finale for the GT World Challenge Europe at Paul Richard Circuit in southern France. 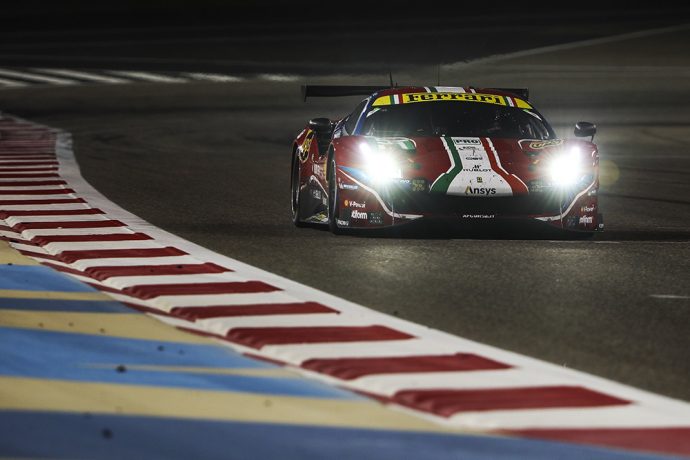 The #51 looked well placed to mount a challenge to the troubled Aston Martins but a mis-timed move to pass a back marker saw Serra make significant contact, the impact instantly breaking he rear left wheel and causing delamination of the tire, the subsequent damage taking five laps to repair. 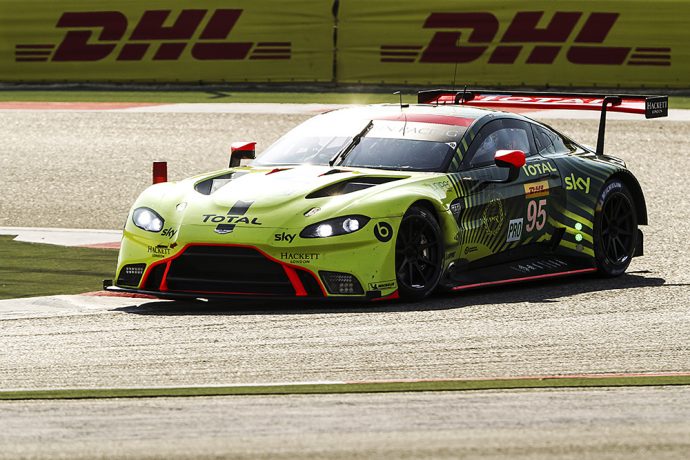 That left the #95 pair to run a cautious pace in the late stages to secure fifth in the class standings and the title, the Drivers crown joining the manufacturer’s title already secured by Aston Martin earlier in the season. 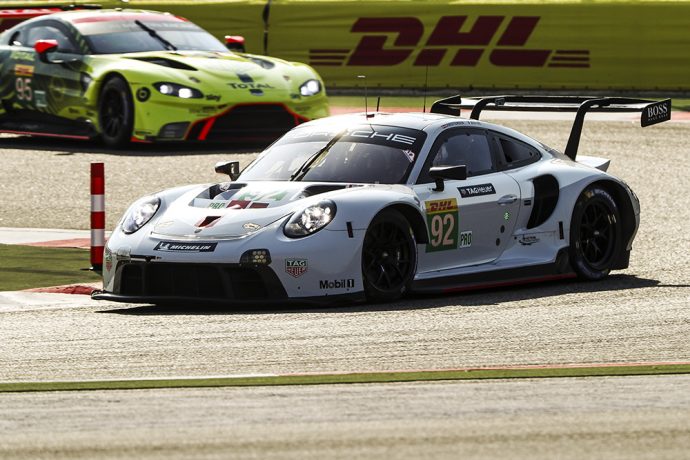 Whilst the FIA World Endurance Championship LMP2 title had already been settled in favour of the #22 United Autosports Oreca Gibson of Philip Hanson, Filipe Albuquerque and Paul Di Resta at the Le Mans 24 Hours in September, the down on numbers class still produced a high quality race with five cars in a near race-long tussle.

The United Autosports bid to finish the season with four straight wins was not to be, the #22 in the mix until first a 5-second pitstop penalty after Di Resta had hit the rear of the #37 Jackie Chan DC Racing Oreca as the pair pitted, and then later running out of fuel as it entered the pits, losing more time as it coasted to its pit box.

The Championship-winning car would finish fourth ahead of the multiple championship-winning #36 Signatech Alpine squad in their final planned race in the class before move up to the new for 2021 ‘Hypercar’ class with a ‘grandfathered’ ex Rebellion Racing LMP1. 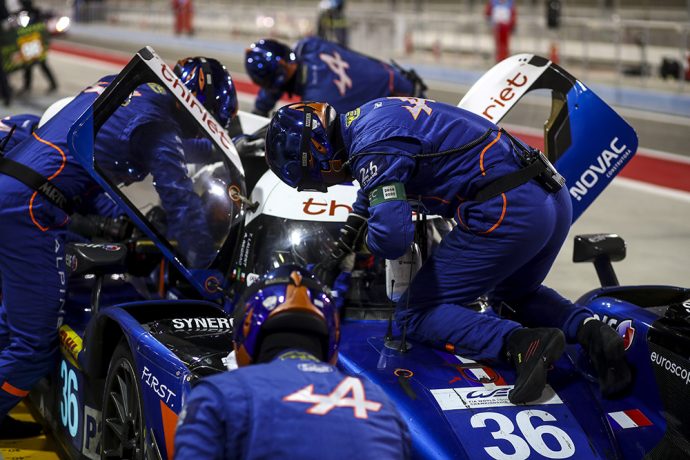 Ahead of the United car came the #29 Racing Team Nederland Oreca, the all-Dutch crew not able to produce the race-long consistency to challenge for the win. That battle came down to the only two cars in the field wearing Goodyear tyres, the US-owned brand set to supply all LMP2s in WEC and European Le Mans Series competition next season after being selected as a sole tyre supplier for the class.

Goodyear re-entered sportscar racing this season replacing the successful Dunlop brand, scoring a single win earlier in the season at the 6 Hours of Shanghai with the #38 Jota Sport Oreca. The 38 was back in the mix this time around with their Gentleman driver in the Pro-Am class, Mexican racer Roberto Gonzales, keeping the car in touch through his required stints and allowing Pro team mates 2014 WEC World Champion and ex F1 racer Anthony Davidson, and current Formula E Champion and recent Indycar tester Antonio Felix de Costa to push for the win. 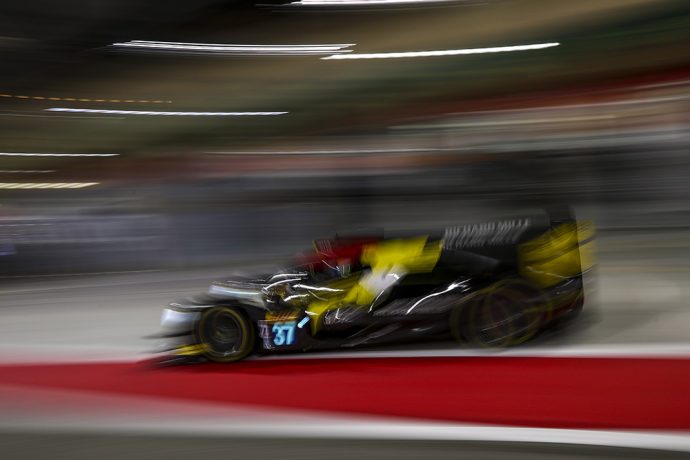 Indeed the #38 went to the front with de Costa at the wheel in the final stages, making his way past the #37 Jackie Chan DC Racing entered car that had also been in the mix too throughout, battling hard and coming out ahead of the major competition, until Portuguese star de Costa got the better of Aubry in the final stint.

The Frenchman though did not drop back and stayed in touch, gathering his pace again and looking for a way by de Costa. That looked unlikely as the #38 pushed for the flag, but with just minutes remaining de Costa made a tiny error, and Aubry pounced into the tight turn 10 that takes the circuit alongside the Bahrain facilities drag strip, by the time the Jota Sport man was aware the move was underway the #37 was fully alongside, up the inside with minor contact as de Costa tried to block, but way too late.

It was an excellent move and Aubry emerged from the corner the leader, and without damage as de Costa was left to recover from running wide off-track as he tried in vain to defend his position.

Aubry would hold the lead to the flag, a fine win in what may be the final race in the WEC for the Jackie Chan DC Racing team.

IN GTE Am the title went to the #83 AF Corse Ferrari team, Frenchmen Francois Perrodo and Sportscar veteran Emmanuel Collard taking their second WEC title after winning the class in 2016, joined this year for his first WEC title by Danish Ferrari factory driver Nicklas Nielsen. 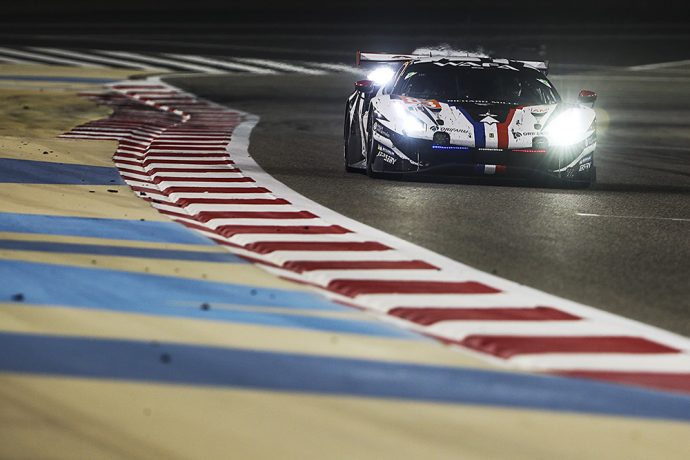 It was a result that seemed unlikely until the closing stages of the race the Ferrari had been running at the tail of the 11 car class field for much of the race but had been preserving tires. As they mounted their attack the braking issues that afflicted the Aston Martin Pro entries hit the Championship-leading #90 TF Sport car, costing the team a full minute and dropping them almost to the back of the field with time ticking down. 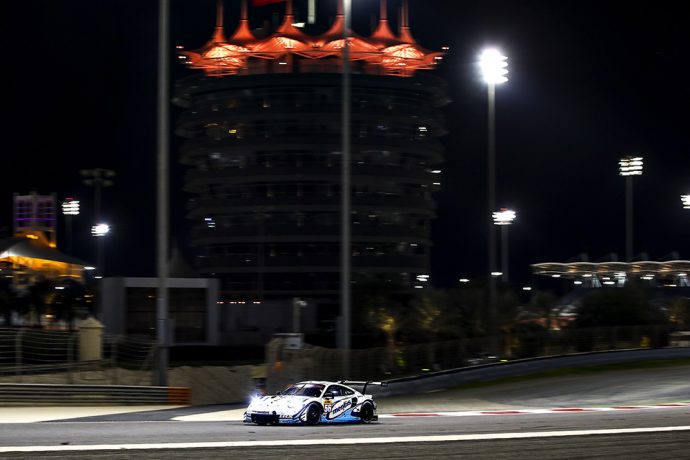