The Pirelli Super Taikyu Series heads to Twin Ring Motegi this weekend for the Motegi Super Taikyu 5 Hours Race, and a 52-car entry list was published by the series on Monday

There’ll be ten cars in the ST-Z (GT4) class, with Audi Team AS Sport returning after taking a round off, and the BEND team making their first appearance of the season with their Porsche Cayman 981 GT4 Clubsport. BEND’s ever-present gentleman driver, Masamitsu Ishihara, will be the oldest driver in the field at 79 years young. They’ll be among the pack that hopes to chase down the championship-leading #3 Endless Mercedes-AMG GT4 of Yuudai Uchida, Hideki Yamauchi, and Tsubasa Takahashi, which goes into the weekend with a 60kg weight handicap based on past results.

The ST-1 class #28 Rookie Racing Toyota GR Supra GT4 is the only car in its class this time, so they’ll look to compare results with the other ST-Z runners.

ST-TCR also got a big boost, up to five entries. Racer Dome Racing are fielding their #97 Honda Civic TCR for the first time since the Fuji 24 Hours, and features Hiroki Otsu, Shinji Nakano, and Honda-backed F4 prospect Syun Koide as their drivers. And the one-off Audi Driving Experience Japan team is back, led by pro drivers Masataka Yanagida and Ryuichiro Tomita. 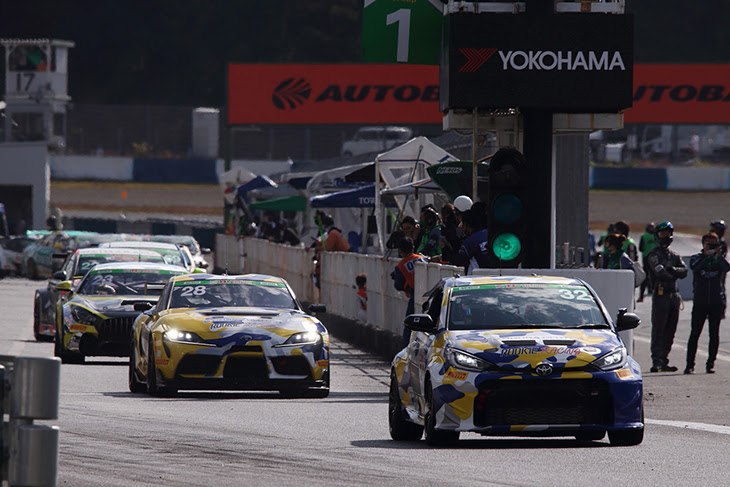 ST-2 also has another intriguing one-off entry, a Honda Civic Type R from the Honda R&D Challenge. Their lead drivers are Hideki Kakinuma, the current project leader of the Civic Type R for Honda, and Junichi Kidachi, chief engineer at Honda R&D’s Automobile R&D division. This gives the field two more top men from the civilian automobile industry to race alongside the likes of Akio “Morizo” Toyoda – who is expected to drive again in the championship-leading #32 Rookie Racing Toyota GR Yaris – and Mazda head of design Ikuo Maeda in the #120 Murakami Motors Mazda Roadster (ST-5 class).

This time of course, there’ll be just a single five-hour endurance race instead of two three-hour races as was the case at Sugo and Okayama.