In both cases, the full driver squads will be returning for a second season together.

In the ELMS Jim McGuire, Duncan Tappy and Andrew Bentley will return to the team in the #3 Ligier JS P320 after finishing fifth at the end of the 2020 season. They ended the year with a fourth-place finish at Portimao, with Andrew and Duncan finishing second at Paul Ricard in August.

Jim has been part of the United Autosports team since the end of 2016, when he joined them for the Gulf 12 Hours. He then entered the Michelin Le Mans Cup with United for the 2017, 2018 and 2019 seasons, while also supporting the team through his AERO Sustainable Paint Technology business. Andrew has been part of the team for many years now in various roles, standing in for drivers who were unable to race in both 2017 and 2019, making his full time United Autosports debut at the start of the 2020 season. Duncan joined the team for the first time in 2020, but has known members of the team since his Formula Ford days.

“I love the team and love racing in Europe. It’s been a great five years with United so far and they’ve been a great partner for AERO Sustainable Paint Technology too. It’s great to be part of a top team. Next year I will be aiming to improve and will be working on those top-five finishes with Duncan and Andrew. I think we’ve got a great line up. I can’t wait.”

“Racing with United in 2020 was fantastic. I’ve known Richard and the core crew from the early 2000’s so it’s been great to be part of the team. It takes the pressure off. One of the unique things about United is that it’s such a family atmosphere, which is great. I’ve never driven around the Red Bull Ring and every driver I’ve spoken to loves it so I’m excited for that.”

“I think I settled into United very well this year. I’ve known a lot of the guys since my Formula Ford years and they made me feel at home and it’s been a lot of fun. It was awesome to get a podium at Paul Ricard in 2020 so we will be aiming for some more of those next year. I’m most looking forward to building on what we’ve learnt this year with the #3 crew. I’m looking forward to continuing to work with Jim and Andrew as well to build on that.”

“I’m thrilled Jim, Andrew and Duncan are staying with the team for 2021. Finishing fifth in the championship last year gives them room to build on what they learnt in 2020, which I know they will. I’m excited to see how they get on.”

“Having Jim as part of the team means there is never a dull moment, so to welcome him back for a fifth season with the team is awesome. AERO has also become a very important partner for United Autosports and is no coincidence that our recent run of success started at the same time as this relationship. Andrew and Duncan settled into the team really well in 2020 too. We have known them both for a long time now so it was a very easy welcome for them. All three of them had a fantastic race at Portimao for the final round, so hopefully, they can build on that going into 2021.”

In the Michelin Le Mans Cup  Andy Meyrick will return to the United Autosports team for a second season alongside his Brazilian team-mate Daniel Schneider. 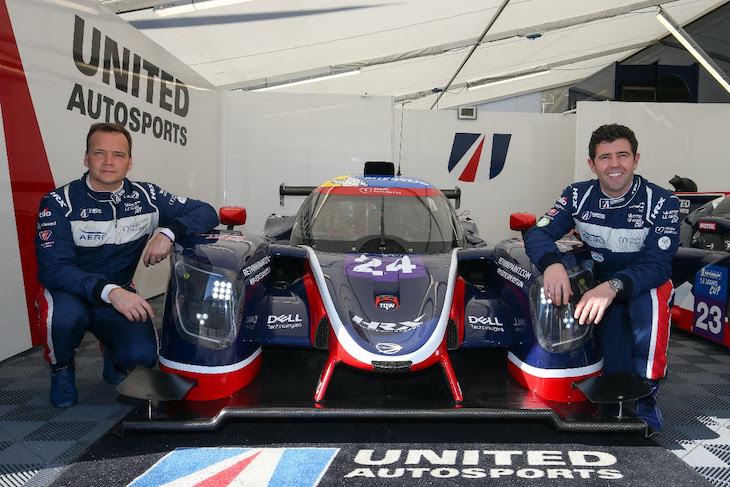 Meyrick and Schneider enjoyed a promising first season together in the team’s Ligier JS P320 LMP3 prototype. The duo’s best result was a podium finish at Paul Ricard but they were frequently in contention elsewhere during a successful initial campaign that produced several points finishes.

Now with a year’s experience behind them, Meyrick believes he and Schneider can take that momentum gained and use it to fight for wins and podiums in 2021.

“I’m looking forward to returning to the Michelin Le Mans Cup in 2021 with Daniel and United Autosports,” said Andy. “Daniel had a strong rookie season in the series this year, and we can look back on what we achieved with a great sense of pride.”

“Taking what we have learned from this season, and having a great team like United behind us, I think we can go into the 2021 campaign confident that we can fight for race wins and build a championship challenge. All the ingredients are there for us to achieve good things next year, it’s down to us to put them all together and maximize our potential.”