The confirmation that the Aston Martin factory will no longer be supporting a GTE Pro campaign brings to an end one of the most successful sporting programmes for the famous British marque.

Since its inception at the start of the FIA World Endurance Championship era, and in the wake of the crushing failure of the AMR One LMP1 effort, the V8 Vantage, through three major iterations, has proven to be a race and Championship winning package in both all-Pro and Pro-Am hands.

Here we’ll take a look back at the highs and lows of a nine-year, eight-season adventure.

The factory team made their comeback with a single Aston Martin V8 Vantage GTE in the full FIA World Endurance Championship.

The first four races saw the car crewed by Darren Turner, Stefan Mücke and Adrian Fernandez, the Mexican driver stepping away after Silverstone. 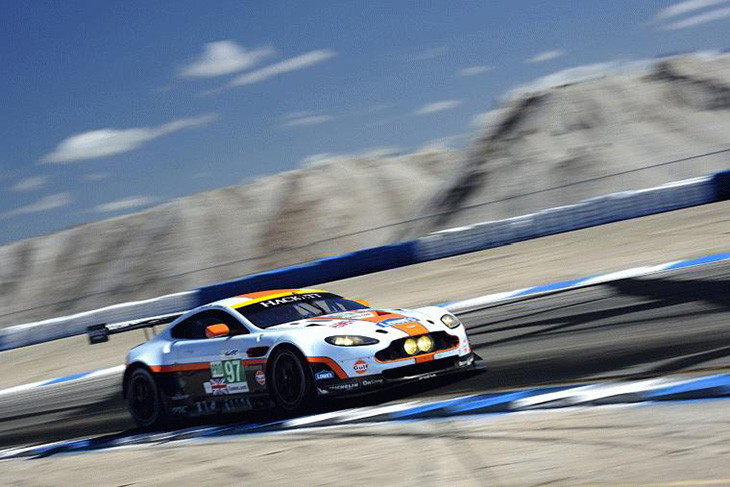 The car proved to be a success finishing on the podium at every round with the exception of Spa (where it retired), scoring a first GTE Pro win at the final round at Shanghai to finish second in the Teams Championship. 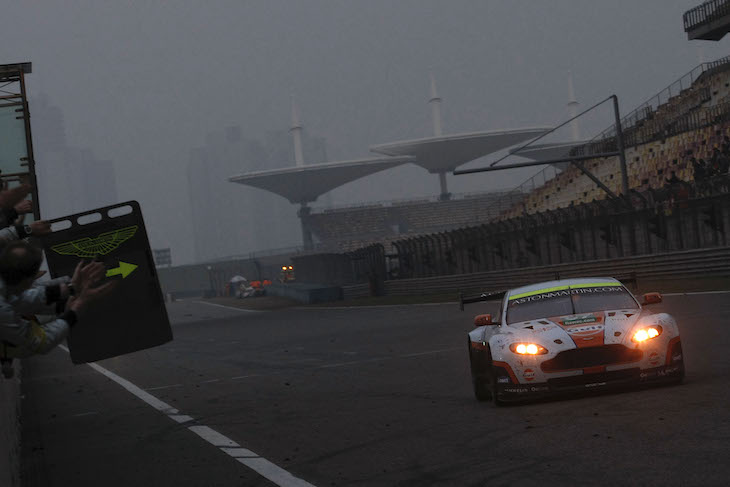 There was a one-off entry in GTE-Am for the #99 Vantage, starting the era of the ‘Dane Train’ with Allan Simonsen joined by Christoffer Nygaard and Kristian Poulsen. An Early misfire and later accident damage ended their day early.

After a single-car effort in 2012, Aston Martin rolled out a two-car GTE Pro effort for 2013, with a third car joining the effort for four rounds from Spa through to CoTA.

Remarkably all four of the full season cars would score at least one class win during the season, a total of four x GTE Pro wins and five GTE AM wins in the eight-race season including win doubles (both Pro and Am) at Silverstone, CoTA and Fuji.

An astonishing nineteen drivers would feature across the five-car season, (including one-off appearances at CoTA for Bill Auberlen and Oliver Gavin), more than half (10) would score at least one win. 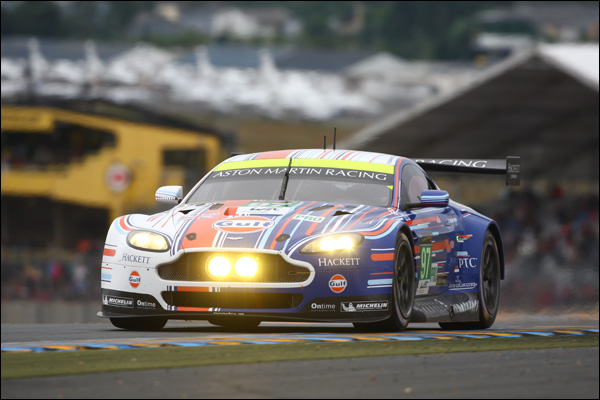 The Pro cars would again prove to be very quick, but for a moment with an unforgiving kerb at CoTA, that saw the #97 car retire with subsequent front suspension damage, the Drivers and manufacturers Pro titles would likely have been won, a second retirement in the season finale at Bahrain sealed their fate, Turner and Mücke third in the driver’s standings despite three wins together, the #97 second in the team’s Championship and Aston Martin Racing falling just short in the manufacturer’s Championship. 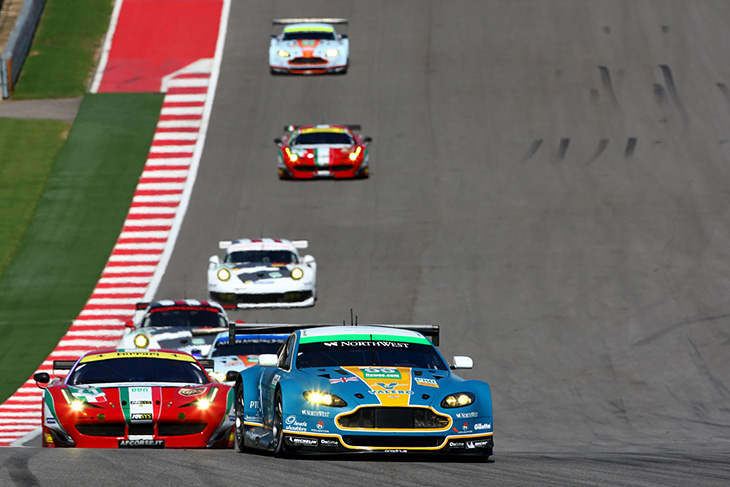 There would be two wins apiece in Pro for both Bruno Senna and Fred Makowiecki, one crewed together in the #99 car at CoTA, and a win apiece with the pair crewed in the #97 at Silverstone (Senna) and Fuji (Mako).

Notably the only other full season Pro driver was Pedro Lamy who spread his time between two different cars, with Bruno Senna running in every race but starting Fuji in the ‘Dane Train’ Am car, and winning the class (in the rain-affected ‘race that never was’ – still a unique record in WEC winning an Am and Pro class in a single season, Senna went on to claim a further record of winning at least one race in every WEC class LMP and GTE. 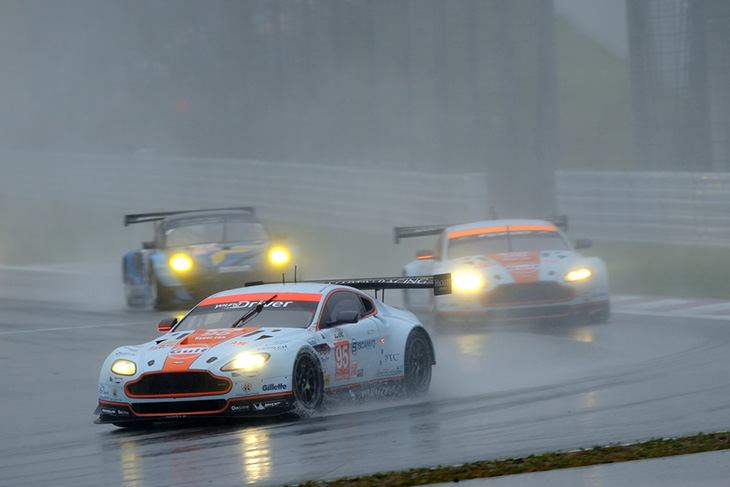 Another notable name on the Pro squad would become an ever-present for the AMR from the following season, Canadian businessman Paul Dalla Lana would contest five races.

Add too further supporting roles from Rob Bell and Richie Stanaway and it was a complex season for the team!

Across in the GTE Am camp, there was a season of seismically different emotions through the year.

The all Danish crew returned for a crack at the full Championship in the #95 car and came out punching, a win at Silverstone and a second-place at Spa set things up beautifully for Le Mans, all three drivers performing well, Allan Simonsen at the peak of his powers and setting class pole by more than a second. 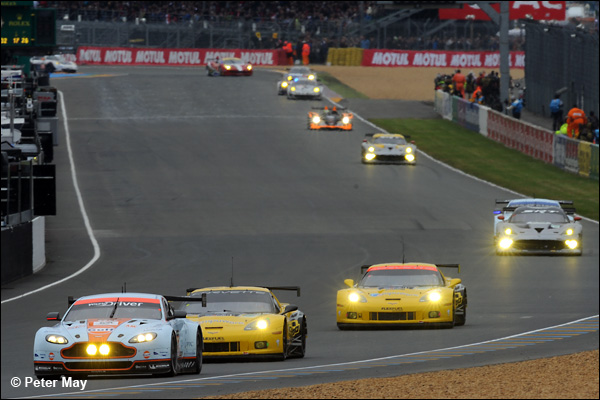 Nine minutes into the race, however, with the Dane pulling away from the GTE Am field came the lowest moment of the team’s history, an accident at Tertre Rouge taking the life of a driver that surely had his greatest days ahead of him. All that knew Simmo miss him still. 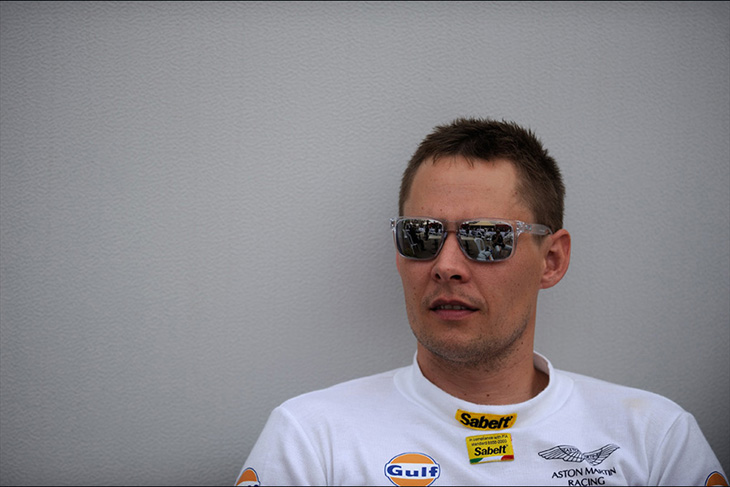 At the request of Allan’s family, the team raced on but it was a sad trio of Turner, Mücke and Peter Dumbreck on the Pro podium.

Allan’s replacement in the #95 was a man who would become a cornerstone of the team thereafter, Nicki Thiim added four WEC races to a season that would see him win the Porsche Supercup (a clash with Fuji would see Senna step in (see above).

There would be the win at Fuji, and another (with Thiim) at the season finale to finish a competitive but cripplingly sad 2013 for Jan Struve’s outfit. 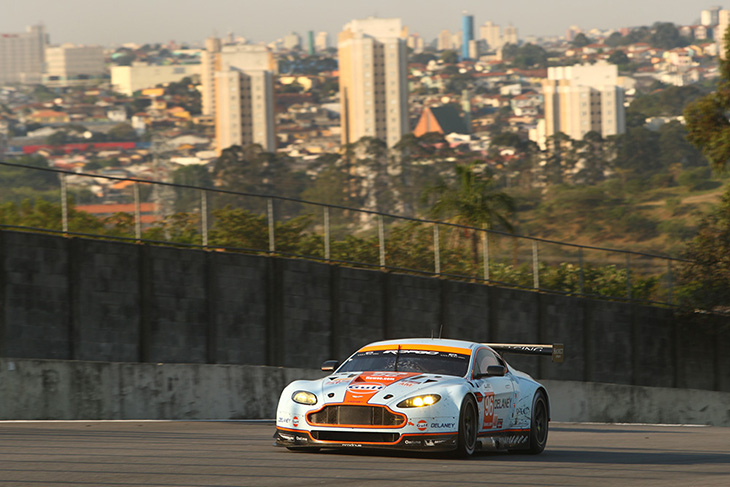 The year would start with a first appearance for the Vantage GTE at the Rolex 24 Hours at Daytona, Paul Dalla Lana supported by Messrs Turner, Mücke, Lamy and Stanaway in a race that would finish with a DNF. 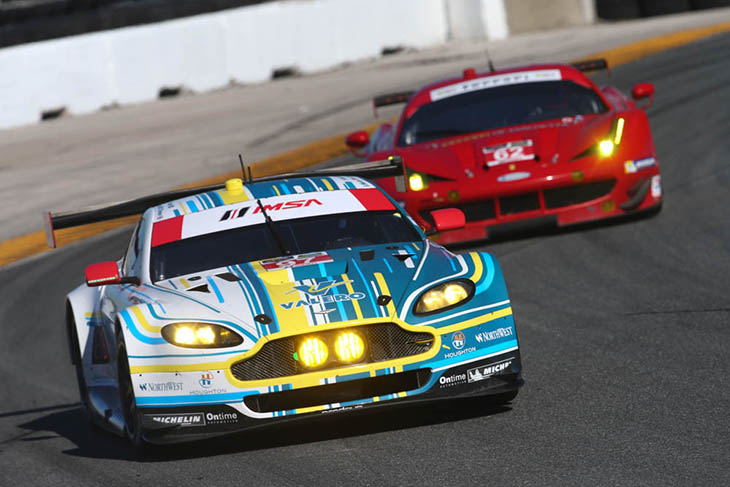 In the FIA WEC, it would be another multi-car season, four full-season crews with two apiece in the Pro and Am GTE classes.

In Pro, Darren Turner and Stefan Mücke would be joined at Spa and Le Mans by Bruno Senna in the lead #97 whilst the #99 would have Alex Macdowall and Fernando Rees full season with Darryl O’Young ever-present too aside from Bahrain where Abdulaziz Al Faisal would make a one-off appearance.

The #97 would score two wins but better results and consistency elsewhere would see the Aston martin out of title contention whilst the sister #99 had a poor season, a Fuji podium the best result of the season, the car being withdrawn from Le Mans by far the worst result after a huge shunt for Rees in the Porsche Curves. 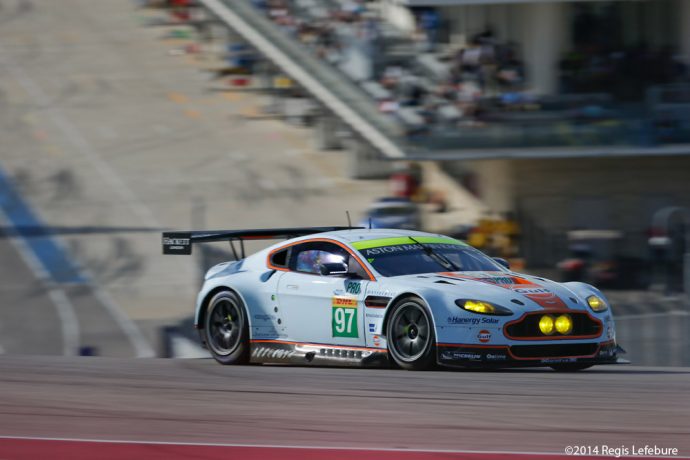 In GTE AM by contrast the season saw Aston Martin domination.

The #98 saw Paul Dalla Lana and Pedro Lamy join forces with Christoffer Nygaard for the full season – That combination took three wins and finished off the podium just once in the eight-race season.

The #95 meanwhile saw Kristian Poulsen joined by yet another Dane, David Heinemeier Hansson for the full season, the pair supported by Richie Stanaway for three races, and by Nicki Thiim for the remaining five – including Le Mans which the all-Danish trio won in what has to be one of the most emotional results in the great race’s history – Aston Martin’s first GTE class win came as part of a very tearful bargain.

All told there would be four class wins, and four second places for a dominant Championship win with the sister car finishing second!

The factory team started the year with a second (and last) attempt at the Rolex 24 Hours with a solo car, Messrs Turner and Mucke joining Paul Dalla Lana, Pedro Lamy and Mathias Lauda en route to a distant 6th in class. 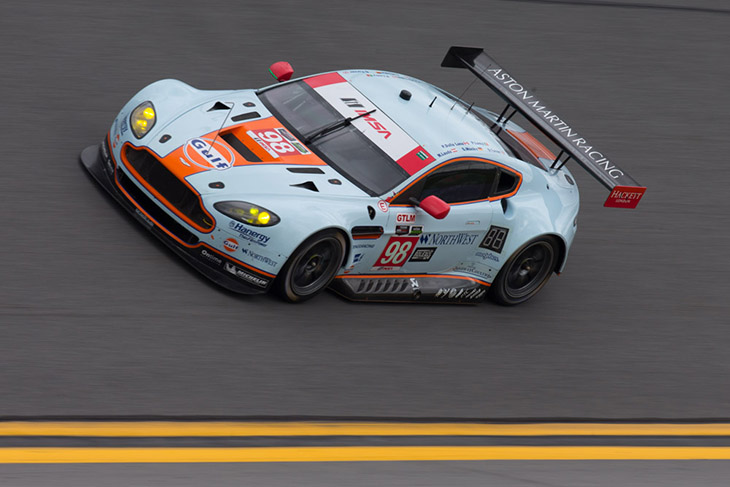 The final WEC season for the original GTE spec car in Pro class service saw a three-car GTE Pro assault with the #95 ‘Dane Train’ stepping up to the premier class for the first time and Marco Sorensen joining the team alongside Nicki Thiim and Christoffer Nygaard.

Darren Turner would be the sole full-season man in the #97, Ford-bound Stefan Mücke departing mid-season to be replaced by Jonny Adam with Rob Bell completing the trio for Spa and Le Mans.  The car would run with a Tobias Rahberger-designed ‘kinetic art’ livery at Le Mans. 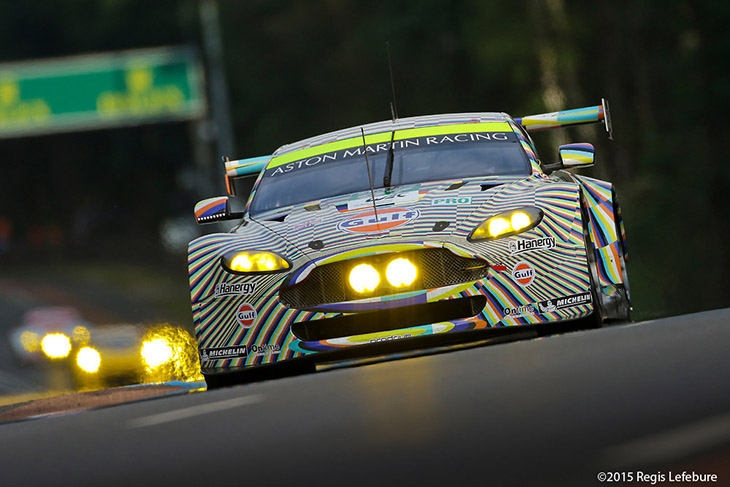 And there was a third factory-run Pro car too, the #99 in the hands of Fernando Rees and Alex MacDowall with Richie Stanaway aboard for all bar Fuji where Stefan Mücke would make a return appearance. 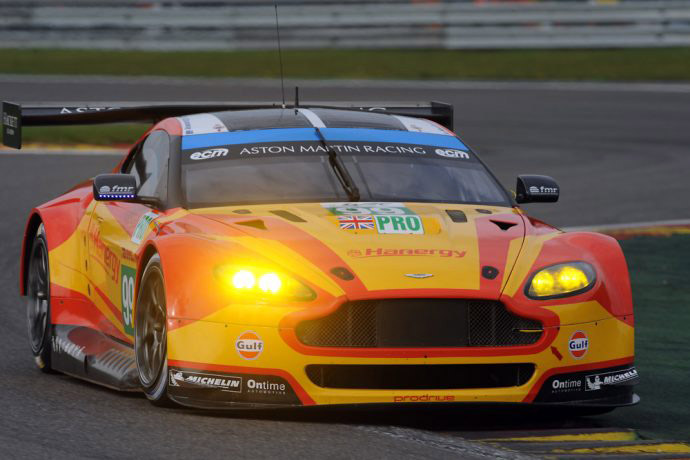 The season was far from successful, the now rather aged Aston Martin struggling and scoring just one win in the class, for the #99 operated under the Aston Martin Racing V8 team banner, at Spa.

Aside from that, there were just two other podiums, one apiece for the #95 (at Le Mans) and the #97 (Bahrain).

In GTE Am there were again two cars, Paul Dalla Lana, Pedro Lamy and Mathias Lauda would be an all-season trio in the #98 whilst in the sister #96, Stuart Hall and Francesco Castellacci would be ever-present, Roald Goethe would join them for the first half of the season and for the season finale, Liam Griffin would play the third man at Fuji and Shanghai with Benny (younger brother of Allan) Simonsen in the seat for CoTA.

The #96 would finish the season without a podium result whilst the #98’s otherwise consistent season with three wins and three second places, was ruined by a non-classified result at Le Mans, with double points on offer that likely cost them the title!