Ben Barnicoat dedicated pole position for the 2021 Gulf 12 Hours Bahrain to the 2 Seas Motorsport mechanics who worked throughout the night to repair the team’s #33 McLaren 720S GT3 following an accident the previous day.

Barnicoat and team-mates Isa Bin Abdulla Alkhalifa and Martin Kodrić went into the final part of the qualifying session trailing the team’s sister #7 McLaren based on average times. But Barnicoat’s stellar first quick lap, seven-tenths of a second quicker than that of Porsche Supercup runner-up Dylan Pereira, ensured that the car would start from the front.

The McLaren duo each took turns to top the second and third practice sessions, providing a hint of what was to come later in the day. The starting grid is based on the average of the fastest times recorded by three drivers in each car.

The #7 car began quickest, 2017 Indy500 podium finisher Ed Jones, who was only drafted in earlier in the week and met team-mates Lewis Williamson and Pereira at driver sign-on, topped the times with 2m00.301s. 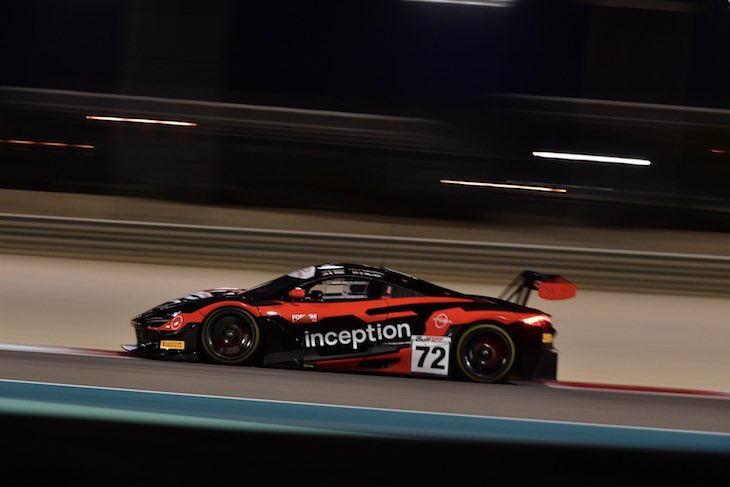 Alkhalifa followed in second only a tenth of a second behind, and the #72 Inception Racing with Optimum driven by Ollie Millroy making it a McLaren trio. That was until the final stages when the #3 RAM Racing Mercedes AMG GT3 of Callum Macleod, late to join the session, quickly set about splitting the leading pack into third place, and demoting Millroy. 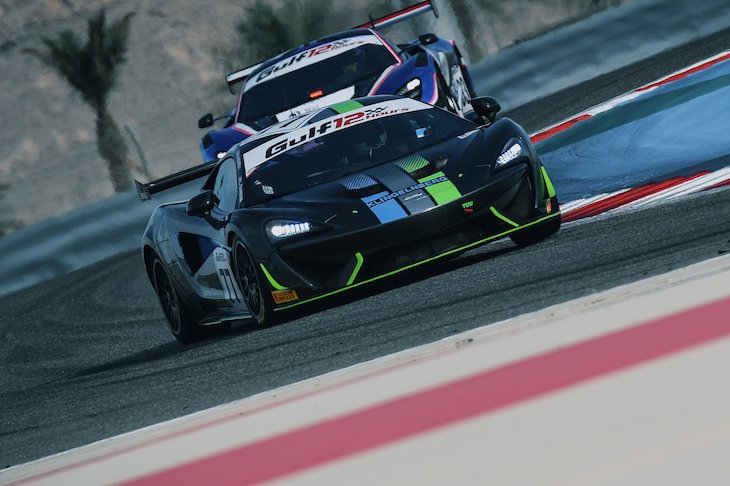 The battle of the two GT3 Pro McLarens continued in the second qualifying session, with the #7 of Williamson leading throughout. Cooler ambient and track temperatures enabled the lap times to dip below the two-minute mark for the first time in the week as Williamson set a best of 1m59.650s.

Kodrić left it until shortly before the chequered flag to pip the Scottish driver to top spot by just 14 hundreds of a second. The #31 Team Parker Bentley Continental GT3 Pro-Am entry of Euan McKay impressed in third place overall and top in class, ahead of the #8 Kessel Racing Ferrari 488 GT3 of Nicola Cadei, and #46 VR46 Kessel Racing Ferrari 488 of Luca Marini, which was making steady progress. 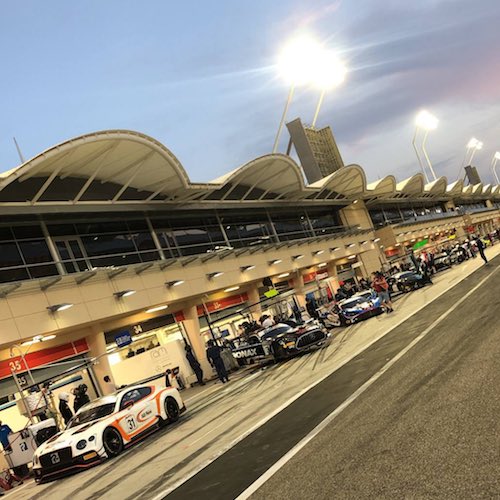 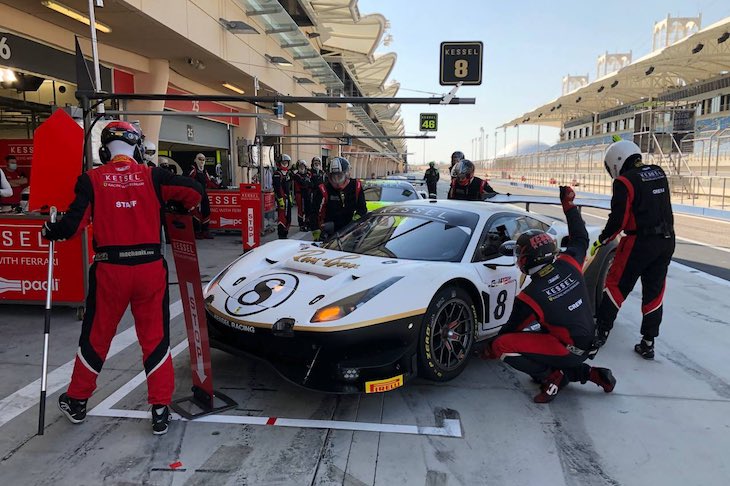 With the final session on a knife-edge between the twin 2 Seas cars, Barnicoat quickly stamped his authority on the session and made no doubt as to which car would be on pole position.

Fuminelli’s outstanding drive ensured the #27 Ferrari would start from third place with the #67 Dinamic Motorsport Porsche 911 GT3 alongside on the second row of the grid and topping the Pro-Am class after Stefano Monaco set that car’s quickest lap of the session in the final stages. 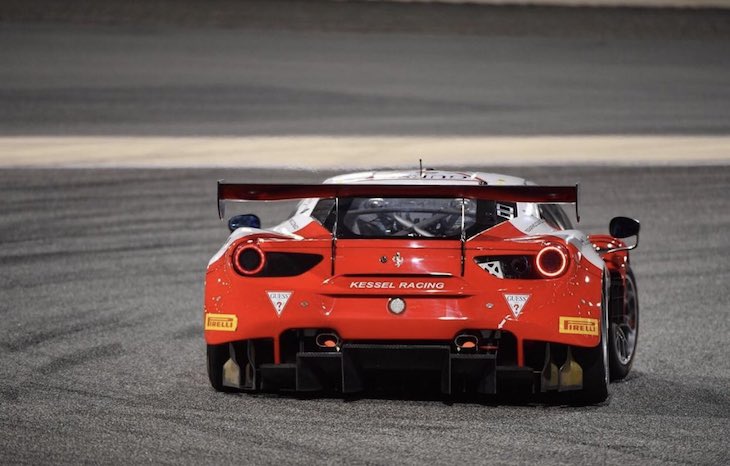 Valentino Rossi took to the seat of the #46 Ferrari for the third part of the session but was unable to improve the car’s position, finishing fifth in the Pro-Am class, and eighth overall. 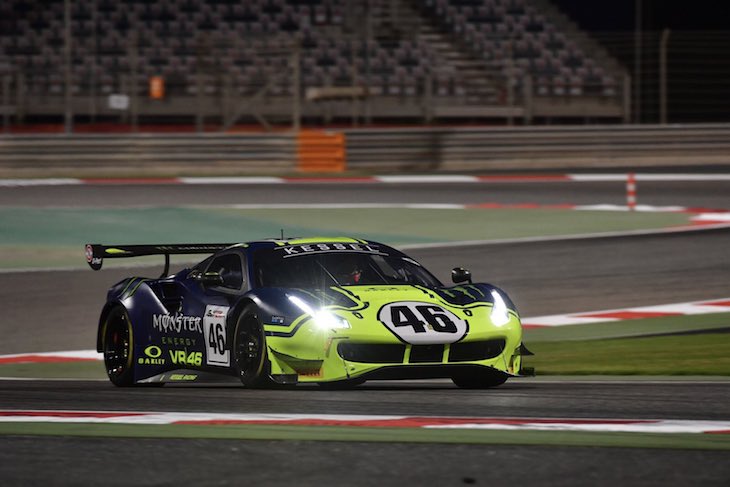 The earlier hard work done by Jean Luc D’Auria in the second session, backed up by team-mate Benedetto Strignano in the third part, ensured that the #90 Mercedes would start on pole in the GT4 class ahead of the #77 Optimum McLaren.

The 12-hour race, split into two halves of six hours, will begin at 09:30 local time (GMT+3/CET+2) and will be broadcast live on YouTube, accessed via the Gulf 12 Hours website or social media channels.

Ben Barnicoat, #33 2 Seas Motorsport McLaren 720S GT3: “What set us up for such a good qualifying was that Isa did such a strong job in the first session. From that moment, it filled all three drivers with confidence because it’s Isa’s first race in GT3 and his first race with 2 Seas. He took it in his stride and was only one-tenth of a second behind Ed [Jones, in the sister #7 car].

“From that moment, Martin and I looked at each other and felt that we were in the mix for pole position. It was great to see how close in the timings Martin and Lewis in the other car were to each other. On average times, the #33 car went into the final session with a deficit, so I knew that I’d have to pull everything out to take it. Dylan Pereira is a great driver.

“The track evolved a lot throughout qualifying, and I still felt that there were one or two-tenths left on the table. We put quite an advantage on the rest of the field.

“After yesterday’s crash, the mechanics stayed to work on the car all night, so that one was for them. Hopefully, we’ll do the big job tomorrow and convert this advantage.”

Lewis Williamson, #7 2 Seas Motorsport McLaren 720S GT3: “We had a few changes on the car for qualifying, some new parts for the car so it felt different compared to yesterday. The car just came alive and added to the cooler track temperature, the car, brakes and tyres were all better. I’m a bit of a rookie in this car, having only driven it once before, it’s a learning curve and we’ll build on this through my stints in the car tomorrow.

“The lap felt nice, not out of control. It’s a very unique circuit, in that you cannot push on your out lap because of the abrasive track surface. It’s all about saving the tyre here, minimising slip and being consistent; not going for the outright quickest speed at the start of the race. The cooler temperatures will help all manufacturers and cars, but the drivers who do that should see the dividends later in the race when the sun goes down.”