The Anglo-Bahraini 2 Seas Motorsport team took the win at the Gulf 12 Hours in a depleted 12 car field at Bahrain International Circuit yesterday, the 12 Hour race relocated and rescheduled from its regular December date at Yas Marina Circuit, Abu Dhabi as a result of COVID-19 health controls and subsequent logistical difficulties.

The team’s #33 McLaren, driven by Ben Barnicoat, Isa Al-Khalifa and Martin Kodrić had to fight back from two separate issues to regain the lead of the race, eventually though finishing well clear of the #67 Dinamic Motorsport Porsche 911 GT3 R, with the #3 RAM Racing Mercedes AMG GT3 in third place overall.

The #33 2 Seas Motorsport McLaren 720S GT3 survived a late-race mechanical scare to lead at the halfway point of the 2021 Gulf 12 Hours Bahrain. 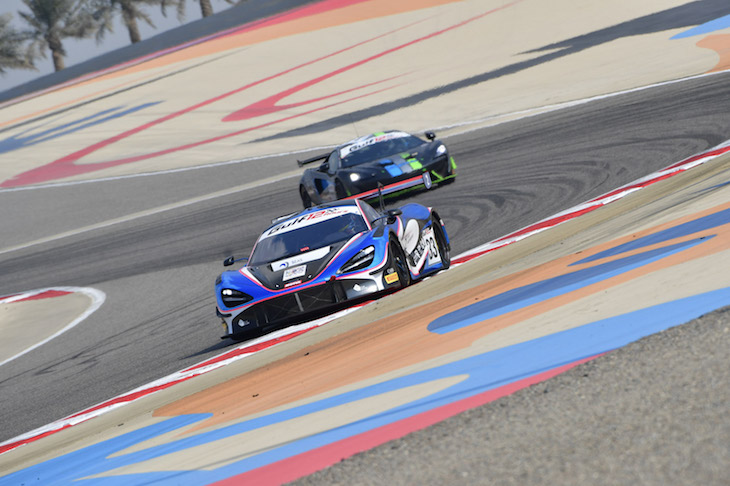 Having lost its sister #7 car to a turbo failure in the early stages of the race, Barnicoat helped to steer the car to a single-lap advantage over the nearest competition, with the #3 RAM Racing Mercedes AMG GT3, Dinamic Motorsport Porsche 911 GT3, and Team Parker Racing Bentley Continental GT3 all at one stage leading the chasing pack.

The #72 Inception Racing with Optimum McLaren 720S GT3 was also within this field in the early stages, as Brendan Iribe battled fiercely with the #46 Monster VR46 Kessel car of Valentino Rossi. But Iribe was forced to pit with a brake bias issue which kept the car in the garage for the majority of the session, only briefly re-appearing in the closing stages before being retired at the interval. 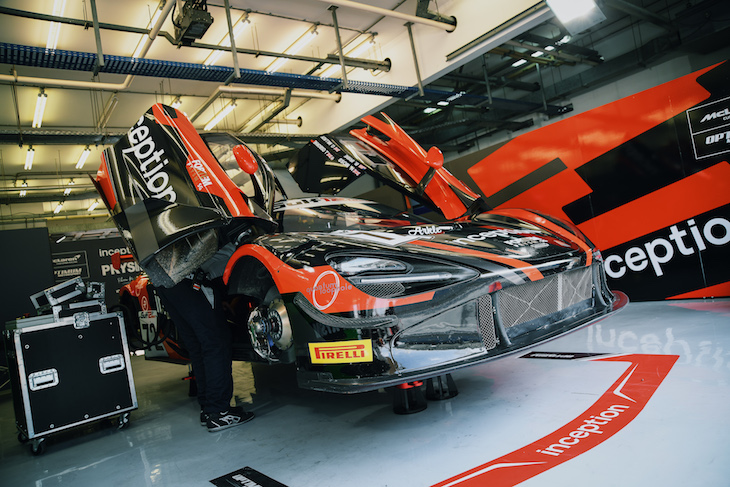 Previous race-winning manufacturer Ferrari was struggling, however, with the #27 Kessel Racing Am car, that started from third place on the grid dropping back into the midfield.

It was joined by its sister #8 Ferrari 488 GT3 which was dogged with rear wing damage-causing multiple spins and off-track moments that resulted in a black flag to return to the pits for repairs.

The #46 Monster VR46 Kessel car of Valentino Rossi, Luca Marini and Alessio Salucci were also struggling to keep up with those in front, with Marini ending the opening part of the race in fifth, but a lap down on the cars ahead.

The field was boosted however with less than an hour left, as Barnicoat, who took over from the impressive Isa Bin Abdulla Alkhalifa, suffered what could have been a serious issue.

Forced to head into the pits twice, Barnicoat encountered gearshift issues in his McLaren, wiping his lap advantage away and handing the lead to the Dinamic Motorsport Porsche. It dropped Barnicoat to fourth overall before he managed to overcome the gremlin and manage any potential further problem.

The Porsche’s lead was short-lived, however, as Roberto Pampinini was unable to prevent the advances of Andy Meyrick’s Team Parker Bentley who eased past into Turn One with 30 minutes remaining.

The McLaren was quickly scything through the field. Barnicoat’s recovery drive thereon demonstrated the power and advantage of the McLaren. The British driver was soon past the RAM Racing Mercedes of Callum Macleod and four seconds per lap quicker than Pampinini who made Barnicoat’s life easier when he spun the car at Turn 13.

Barnicoat was already 2.5 seconds quicker than Meyrick and made little work of the former Bentley factory driver to regain the lead to the chequered flag.

The Bentley pitted in the closing minutes for a splash of fuel, dropping it to fourth as the RAM Mercedes finished second with Pampinini third.

The GT4 class was led by the #77 Optimum Motorsport McLaren 570S, having taken advantage of a 25-second Stop-and-Go penalty to long-time leader #90 Scuderia Villorba Corse Mercedes AMG for crossing the white line at pit exit on two occasions. 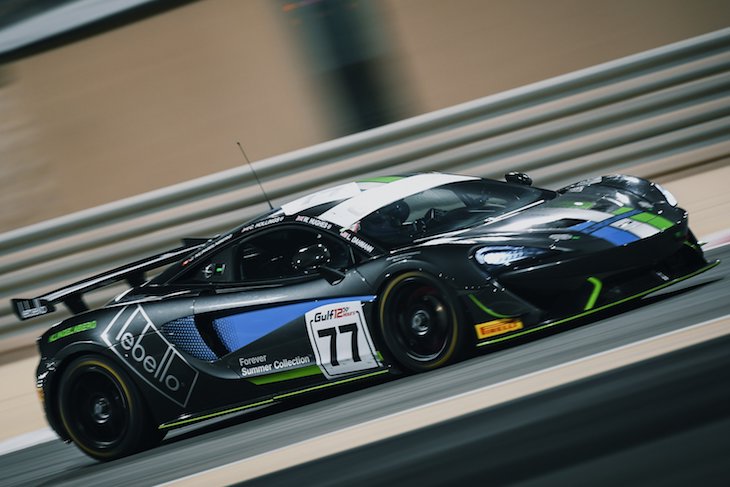 Jean-Luc D’Auria, who is competing in his first international race, impressed to keep the car in second place with the #50 SVC Sport Management Maserati in third, multiple laps down.

The #33 2 Seas Motorsport McLaren 720S GT3 scored a dominant win in the 2021 Gulf 12 Hours Bahrain after sprinting clear of its rivals in the second part of the race at Bahrain International Circuit and taking the first-ever outright win for the British manufacturer in the event’s history. 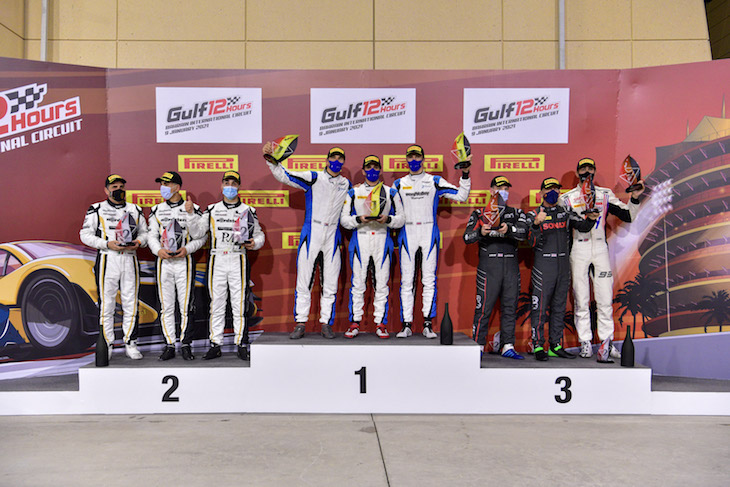 Having recovered from a potentially race-ending mechanical scare during the closing stages of the day’s first part of the race, the McLaren showed no sign of further issues in the second half as it quickly eased its way from its rivals in the early stages.

Its level of dominance was reflected, not least by the statistic that it led for all but 14 of the 341 total laps, but that it took the chequered flag a lap ahead of its closest challenger, the #67 Dinamic Motorsport Porsche 911 GT3 R, with the #3 RAM Racing Mercedes AMG GT3 a further lap behind in third place overall. 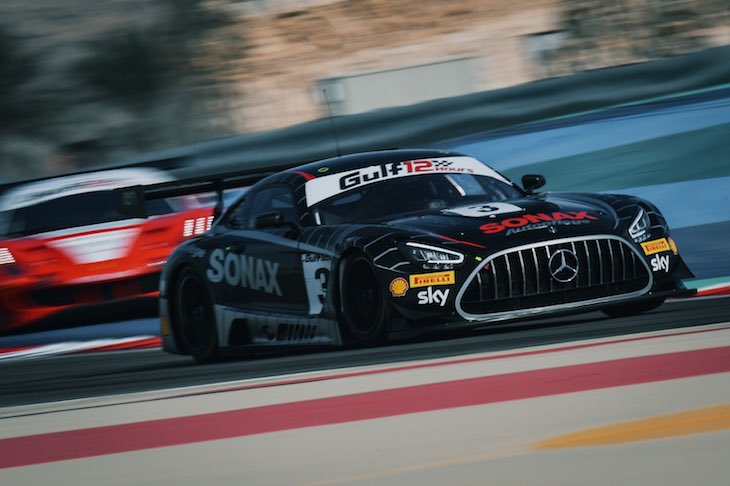 As the #33 McLaren headed off from the rolling start, a number of cars, including the #3 Mercedes, #31 Team Parker Racing Bentley Continental GT3 and GT4 class leading #77 Optimum Motorsport McLaren 570S were forced to head to the pit lane to serve respective penalties for driver stint time infringements in the opening part of the race. 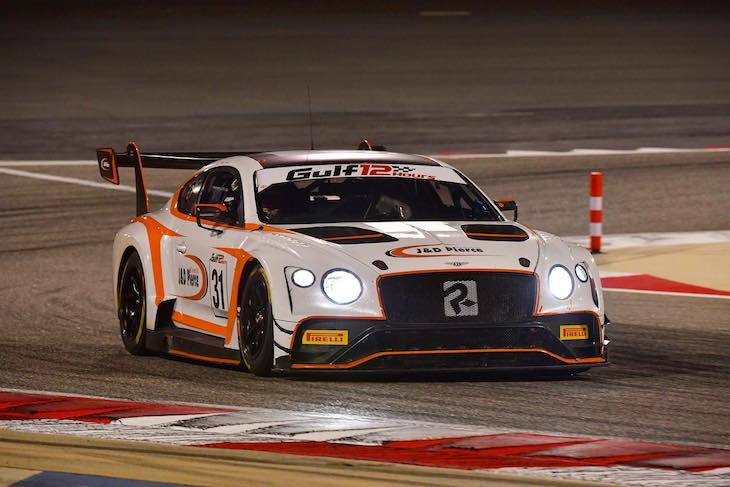 It was the start of several pit lane visits for the Optimum squad, that lost its McLaren 720S GT3 Pro-Am car to retirement during the break between the two parts of the race with brake issues.

Soon after serving its penalty, the #77 McLaren was into the pits once again with a wheel spin sensor issue, losing its class lead to the #90 Scuderia Villorba Corse Mercedes AMG GT4, and returning to the track nine laps down but still second in class.

However a drive-through penalty for speeding in the pit lane in the opening half hour, further hindered their challenge. Halfway through the second part, the car returned to the pits for two more lengthy spells with a lambda sensor problem.

The team’s woes dropped them to third in class with the #50 SVC Sport Management Maserati MC GT4, which had suspension woes following a meeting with the barriers earlier in the first half of the race, elevated to second in class.

The rise of the class-winning #90 Mercedes was further surprising after the team was forced to make an enforced gearbox change to the car during the halfway break following an oil leak in the first six hours. Bronze driver Jean-Luc D’auria, 21, was also making a highly impressive car racing debut in the event.

Behind the top three cars that were not seriously challenged in the second six hours, the #46 Monster VR46 Kessel car, that won its Pro-Am class at the 2019 Gulf 12 Hours at Yas Marina Circuit in Abu Dhabi, took fourth overall and second in Pro-Am on this occasion, ahead of the #31 Team Parker Racing Bentley. 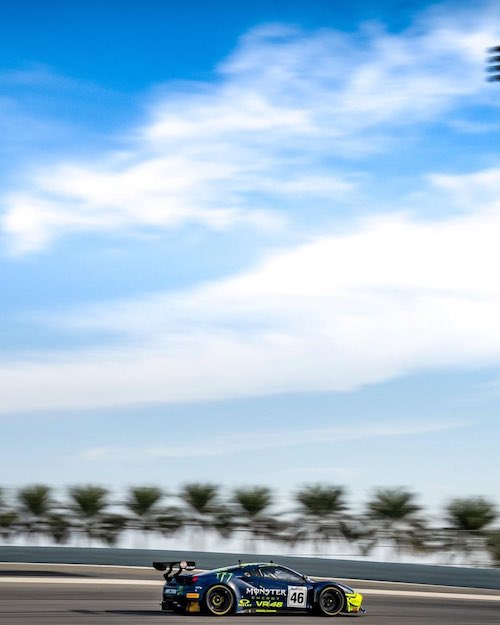 Ben Barnicoat, #33 2 Seas Motorsport McLaren 720S GT3: “What a rollercoaster few days! We had a couple of hurdles to overcome over the course of the week. The first issue during part one was that the car suffered with gear shifting. On the first enforced stop, we changed the steering wheel which didn’t resolve the issue.

“So coming in again, we plugged the car into the computer software and fixed the issue. The car has been phenomenal, it surprised me just how quick we were able to storm back into the lead, the team has done such a good job setting the car up. Around the corners, the performance was incredible.

“The second half of the race was far calmer for us, the car didn’t miss a beat. I can’t thank the mechanics enough. After the repairs needed on Thursday, it was an immense effort. It was a shame to lose the sister #7 car so early, but I don’t think even they could have stopped us today.

“For me to return to the Gulf 12 Hours, two years after having one hand on the trophy and it being taken away late on, meant it was nerve-wracking in those final laps. Over the last 15 minutes, I just focused on hitting my marks and kept my pace up to the chequered flag. It’s an awesome feeling.”

Stefano Monaco, #67 Dinamic Motorsport Porsche 911 GT3: “The key to our second place was the team effort, our set-up was perfect, my team-mates were perfect, and the car was so reliable throughout both parts of the race. It was an outstanding effort from everyone. It’s been a great week and this result is a fantastic achievement.”

Callum Macleod, #3 RAM Racing Mercedes AMG GT3: “The win was never on the cards with the pace of the McLaren. But we were hoping to be the best of the rest in second overall and win the Pro-Am class which we achieved in the first part of the race.

“Unfortunately we had a slight driving stint time infringement in the first part. We were two seconds under the time which resulted in the drive-through in the second half of the race. From there, it was just an immeasurable gap to try and recover. But the car ran faultlessly, the pit stop were great and the team did a really great job. It was about consistency, and protecting our lead over fourth place to bag the podium.”

Jean-Luc D’auria, #90 Scuderia Villorba Corse Mercedes AMG GT4: “The team did an absolutely extraordinary job and my team-mates worked really well together. We had a good strategy and despite a penalty in the first part of the race, we made it through. I’m super happy, because this is my first ever car race and I have my first race win, not just a podium! To spend it with such a good team is a privilege and an honour. I’ll never forget the day.”