Last night saw the full grid shot taken with a stunning ‘after dark’ shot that also included a smattering of the F4 UAE cars that are supporting the 24H Series this weekend.

The F4 grid includes cars for Hamda Al Qubaisi (whose father Khaled is a two-time winner of the Dubai 24 Hours and is on the grid once again this year, named in both of the GT3 class HRT AMGs) and for Enzo, son of Jarno Trulli.

Some good news for a couple of cars in trouble yesterday:  The #114 VW Golf TCR, heavily shunted in testing with just about every panel dented in a ‘Days of Thunder’-spec incident is back more or less in one piece, the car did not make the TCE only session this morning but looks set to be back on track later today.

The #710 GTX class Leipert Lamborghini Super Trofeo also had an ‘off’ yesterday, the car suffering rear left-hand corner damage but again looking back to its fighting form this morning.

An update on the CWS Ginettas. The team may enter three cars, the spare car that was airfreighted in and the two late-arriving G55s – to be confirmed!

And… it is, though the ‘spare’ is likely to start and park.  Also on the late-arriving boat are the intended race car for the Optimum GT3 effort (they are running the car that raced last weekend at Gulf 12 Hours at present) and the Simpson Motorsport TCR Audi, the team has rented a locally based car thus far.

The ship is understood to have docked but the cars are unlikely to arrive at the circuit until the wee small hours.   Optimum look likely to race the car already on site.

The Prosport Aston Martin GT4 squad were running a spare car in testing yesterday, the team switching to their (orange and white) race week car from today, both carrying #401. 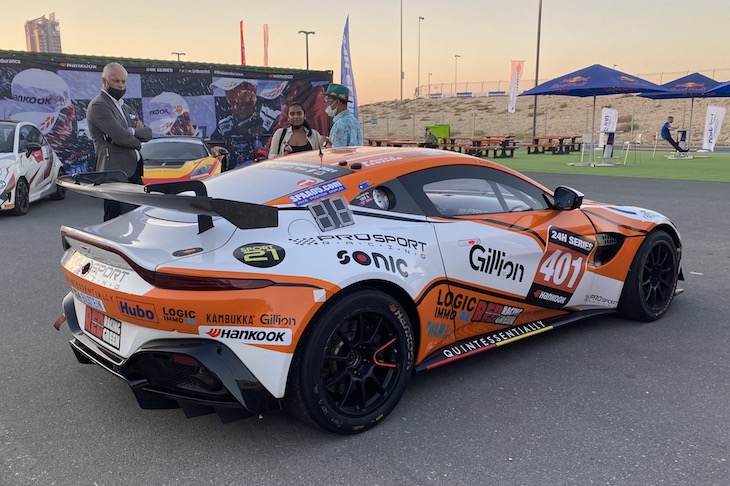 Similarly, the #710 GT3 Poland GTX Lamborghini Trofeo squad also had a spare car on hand for use in the paid practice session though only ran a single car at one time.