JOTA have confirmed their second full-season 2021 FIA WEC LMP2 squad with an unchanged line-up in the #38 Oreca-Gibson.

Roberto Gonzalez, Anthony Davidson and Antonio Felix da Costa will stay on for a second campaign as teammates with the British entered team after a successful first season together, which saw the trio claim victory in the 6 Hours of Shanghai.

They will join the already confirmed #28 crew with Sean Gelael, Stoffel Vandoorne and Tom Blomqvist. 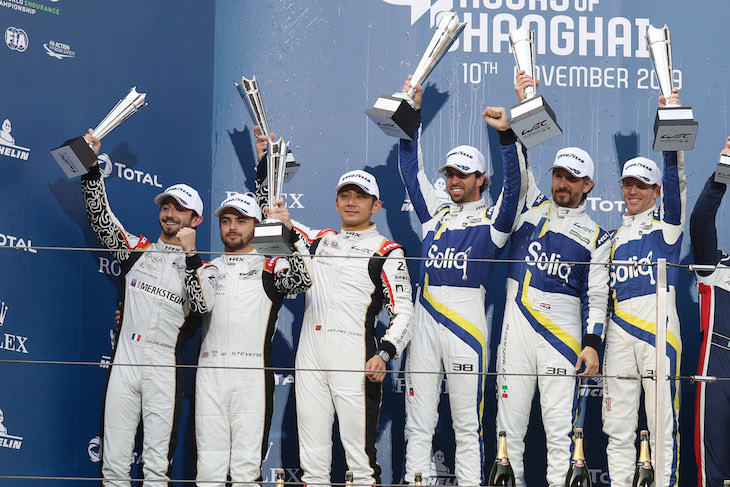 As well as taking an LMP2 win in China last season (above), Gonzalez, Davidson and da Costa were consistent title challengers and also took four additional podium positions over the course of the COVID extended season, en route to second place in the team’s Championship and third spot in the Drivers standings.

A further season highlight was a close second place at the 24 Hours of Le Mans last September when the trio were in contention throughout the race for victory. JOTA’s enviable record at the world’s biggest and greatest endurance event has seen them win LMP2 twice (2014 and 2017), finish on the podium a further five times and finish a remarkable second overall (2017).

Roberto Gonzalez has competed in international sportscar racing since 2016, first with the Manor Racing and then the Dragonspeed entries.

He transferred to JOTA at the start of the 2019-20 season and continued a fruitful partnership with Anthony Davidson, who he also partnered with at Dragonspeed.

From Monterrey in Mexico, Gonzalez immediately forged an excellent relationship with the JOTA team and had by far his most successful season to date in the Goodyear shod Oreca-Gibson.

Anthony Davidson has enjoyed a successful sportscar career which has encompassed stints at Peugeot (2010-11) and Toyota (2012-17) factory teams over the last decade.

The 41 year-old British driver was crowned 2014 FIA WEC champion and has recorded 10 overall WEC wins, all with Toyota.

Prior to and also during his endurance career, Davidson was a highly respected Formula One race, test and simulator driver working with several teams including BAR, Super Aguri and Mercedes-Benz.

Antonio Felix da Costa has raced in sportscars since making his competitive debut in the ADAC GT Masters in 2016.

He first raced in the FIA WEC in 2018 with BMW, the same year he first competed in a JOTA run entry that he took to fifth place at the Rolex 24 Hours of Daytona alongside Alex Brundle, Ferdinand Habsburg and Ho-Pin Tung.

Since switching from the BMW squad in 2019, Da Costa re-joined JOTA for the last FIA WEC campaign where he formed the current successful partnership with Gonzalez and Davidson.

The Portuguese driver, who also won the Macau Grand Prix twice (2012 and 2016), is currently the reigning FIA Formula E champion having taken the 2019-20 crown last summer in Berlin for the DS Techeetah squad.

The No.38 crew will first be in action at the 1000 Miles of Sebring which is scheduled to take place on Friday, March 19.

Gonzalez, Davidson and Da Costa will continue to race in the same Oreca-Gibson LMP2 on Goodyear tyres this season. But they are set to compete in an all-new vibrant livery, which will be revealed shortly.

David Clark – JOTA Co-Owner: “Continuity over the seasons is quite rare in endurance racing, so it is great to see Roberto, Anthony and Antonio back together again for the upcoming season with us here at JOTA.

“They all clearly showed that they had flair, consistency, a great team ethic and many other attributes to mount a serious title challenge last time around. These are all traits that JOTA also revel in when we go racing, so each of these guys fits in very well with the whole team.

“Roberto has really proved to be one of the most impressive genuine silver ranked drivers in the business and he excelled through the support, advice and experience of both Anthony and Antonio.

“So, we are really looking forward to achieving more great results together throughout the 2021 WEC season.”

Roberto Gonzalez, JOTA Driver: “I am very happy and motivated to continue with JOTA this season. Every member of the team has shown passion and professionalism so I feel proud to be part of this team.

“The same goes for my teammates in Anthony and Antonio, who I have built a great relationship with, and which has proved to be very productive and also fun. I look forward to keep building on the success we had last season and to fight for the LMP2 championship.

“I want to thank David (Clark), Sam (Hignett), Antonio and Anthony, for believing in our project once again.”

Anthony Davidson: “I can’t wait to get back on track this year with JOTA and to build on what we achieved last season as a team and as a car crew.

“We managed to set the bar pretty high last year, but I have full confidence we can not only continue that but also go on to achieve even greater things in 2021.”

Antonio Felix da Costa: “I’m super happy to be back in the WEC with JOTA and racing with Roberto and Anthony once again.

“I am a big fan of continuity, and we will be able to carry the momentum we gained last season to have another crack at winning the FIA WEC and also Le Mans. I can’t wait to get started and go racing in Sebring.”