Honda Motor Company have announced their full range of 2021 motorsports activities, including the teams and drivers which will represent them in the upcoming 2021 Autobacs Super GT Series.

Honda will look to build upon the success of 2020, in which the new front-engined NSX-GT won four races in its debut campaign, and Team Kunimitsu captured the GT500 Drivers’ and Teams’ Championships for the second time in three seasons. In fact, all five of Honda’s GT500 teams stood on the podium at least once in 2020.

Reigning champions Team Kunimitsu will once again run with the champions’ number 1 plate in 2021, and retain the defending championship-winning duo of Naoki Yamamoto and Tadasuke Makino. Two-time GT500 Champion and three-time Super Formula Champion Yamamoto, 32, will be in his twelfth season as a Honda GT500 driver, and his tenth at Team Kunimitsu. Makino, 23, will be in his third full season in GT500, his second with the team.

A new title sponsor for Team Kunimitsu’s #1 NSX-GT is expected to be announced on 18 January, when the team reveals their 2021 livery – following the end of a 25-year partnership with Raybrig, which has been folded by parent company Stanley Electric.

Real Racing welcome a new company as their title sponsor, as the new conglomerate Hitachi Astemo will serve as title sponsor for Astemo Real Racing and the #17 Astemo NSX-GT. Their new red and silver livery will be a callback to the red livery they first used in Super GT from 2007 to 2008, their first two years in the series. 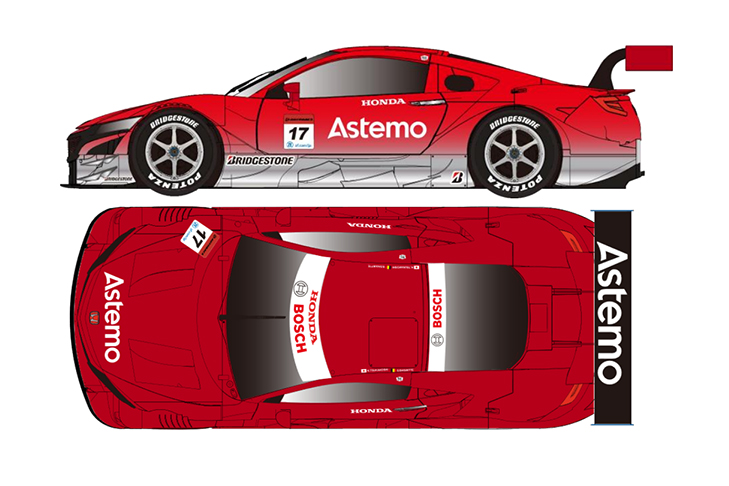 Real Racing have also retained the experienced lineup of Koudai Tsukakoshi (34), who is entering his thirteenth full season in GT500, and Bertrand Baguette (34), who is in his eighth season. Tsukakoshi and Baguette finished 2020 with two race wins, and ranked 3rd in the GT500 Drivers’ Championship.

As for Team Red Bull Mugen, they will feature a young and energetic driver lineup in 2021, led by 25-year-old GT500 sophomore Ukyo Sasahara, who scored his first podium in just his fourth race at Twin Ring Motegi in September. 22-year-old Toshiki Oyu will make the step up to GT500 competition alongside Sasahara, following a 2020 season in which Oyu finished 4th in the GT500 Drivers’ Championship, and 6th as a rookie in Super Formula – with a maiden victory at the prestigious JAF Suzuka Grand Prix.

Oyu will replace long-time Honda factory driver Hideki Mutoh, the 2013 GT300 Champion who spent nine seasons driving for Honda in GT500, and had spent the last four seasons with Team Mugen since their return to GT500 in 2017.

In addition, Shinji Nakano has stood down as Team Director of Mugen in both GT500 and Super Formula after two seasons, and will be replaced by Hirokatsu Tanaka.

In addition to their GT500 programme, Honda has also confirmed their presence in the GT300 category with two customer NSX GT3 EVOs. After three podium finishes in 2020, Honda will aim to return to the top step of the podium in GT300 this upcoming season.

ARTA’s number 55 NSX GT3 Evo welcomes back the legendary two-time GT300 Champion Shinichi Takagi, who is expected to be fit to start the 2021 season, his twentieth with the ARTA organisation. Takagi’s new co-driver is 2019 FIA F4 Japanese Champion, Ren Sato, who is returning to Japan after finishing as 2020 French F4 vice-champion. The 19-year-old Sato makes his sports car racing debut in 2021.

Team UPGarage also returns with their #18 NSX GT3, which will be driven by veteran GT300 race winner Takashi Kobayashi, as well as another sports car racing rookie, 20-year-old Teppei Natori. Natori was the runner-up to Formula 1-bound Yuki Tsunoda in the 2018 Japanese F4 Championship. In 2019, Natori competed in FIA Formula 3, and in 2020, he returned to Japan to race in Super Formula Lights.