BMW Team RLL will race only at the four IMSA enduros in 2021 leaving the GTLM class for the IMSA Weathertech Sportscar Championship with just three full-season entries.

The BMW M8 GTEs will race only at the Rolex 24 Hours, Sebring 12 Hours, 6 Hours at the Glen and Petit Le Mans, leaving only the factory Corvettes and the WeatherTech/ Proton Porsche to contest the remaining rounds together, the Risi Competizione Ferrari currently confirmed only for Daytona.

BMW Team RLL meanwhile will be targeting a hat-trick of GTLM class wins at the Rolex 24 Hours after winning the race in 2019 and 2020. 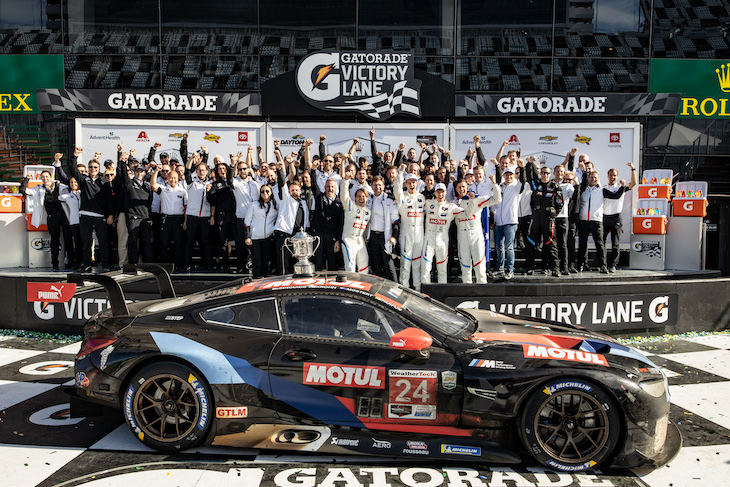 They’ll also be seeking to retain the Driver, Team and Manufacturer titles won in the Michelin Endurance Cup last season.

They will be supported by BMW works driver Marco Wittmann.

The remainder of the four-race programme will see three regular drivers per car. In the #24 BMW, Edwards, Krohn and Farfus will contest all four IMSA endurance races. In the sister car, Spengler, De Phillippi and Eng make up the regular crew.

At Daytona, they will be joined by Wittmann and Glock. It will be the first appearance at the ‘Daytona International Speedway’ in the MOTUL BMW M8 GTE for both BMW works drivers. Wittmann returns to Daytona for the first time since representing Turner Motorsport in the BMW M6 GT3 in 2016, while Glock makes his debut.

The 59th edition of the Rolex 24 at Daytona gets underway at 3.40 pm local time (9.40 pm CET) on 30th January. From 22nd to 24th January, all the BMW teams will be preparing for the first highlight of the season at the ‘Roar before the 24’, the official test drives.

John Edwards (BMW Team RLL, #24 MOTUL BMW M8 GTE): “While the off season was short, I’m thrilled to be going back racing again. Last year’s 24-hour race was an intense, thrilling race right down to the end and we walked away with new Rolex watches. The competition is strong again this year, but I’m confident we can pull it off to get BMW Team RLL their third straight win at the biggest race of the year.”

Jesse Krohn (BMW Team RLL, #24 MOTUL BMW M8 GTE): “Daytona has been a good track for the team these past two years. We got a lot of things right and learned a lot during this time. It goes without saying that there are a lot of things that can go wrong at a 24-hour race, but with the two wins recently it seems we have found the key to enjoying success at Daytona. We have strong drivers in both cars, and I am really looking forward to racing alongside John, Augusto and Marco. Augusto has an incredible wealth of experience in North America, he doesn’t need anyone to explain Daytona to him. Marco is extremely fast and no doubt it won’t take him long to learn what it takes at Daytona. He has been here before, so knows what’s in store.”

Augusto Farfus (BMW Team RLL, #24 MOTUL BMW M8 GTE): “Daytona is always a very special, magical place for me. The race is really iconic. Our BMW M8 GTE has always been strong there and I got the win there the past two years so, I am really happy to be involved again this year and hopefully to be able to help the team celebrate another success.”

Marco Wittmann (BMW Team RLL, #24 MOTUL BMW M8 GTE): “It’s great that the new year kicks off with a highlight. It will be my first race of the season and my debut in the BMW M8 GTE. I contested the 24 Hours of Daytona for Turner Motorsport back in 2016. Obviously, the race will be very different due to the pandemic, but the hygiene and safety measures stood the test in the DTM and at the 24 Hours Nürburgring in 2020. I’m definitely looking forward to getting started.”

Bruno Spengler (BMW Team RLL, #25 MOTUL BMW M8 GTE): “Daytona is a major highlight for me, and I’m delighted to be taking part again. We had a car capable of winning last year, but were very unlucky with a technical defect in the race. Hopefully, we will have more luck this time around. I’m really looking forward to working with BMW Team RLL and Connor De Phillippi again; we got on really well last year, and I know Philipp Eng really well from the DTM. The four endurance classics are big races with incredible history. It’s fantastic to be involved. I’m familiar with Daytona, Sebring and Road Atlanta. Watkins Glen will be a totally new track for me, and one I’m very excited for.”

Connor De Phillippi (BMW Team RLL, #25 MOTUL BMW M8 GTE): “Firstly, I’m thrilled to continue this journey with BMW and I’m thankful they have put their trust in me. Going into 2021 I have set the bar for myself and the team very high. Starting this season with the same team-mate will have a big impact on Daytona and then we can build on that momentum as the season progresses. It’s always a great show at Daytona and I’m looking forward to getting back to work with my BMW Team RLL crew.”

Philipp Eng (BMW Team RLL, #25 MOTUL BMW M8 GTE): “I’m really looking forward to being able to contest the four IMSA endurance races with BMW Team RLL and very good team-mates. I hope that we will be able to repeat the Daytona wins of the past two years and that I will get the opportunity to fight for the endurance title. I topped the driver standings after Sebring in 2019, but then I wasn’t scheduled to take part in any more IMSA races. That’s why I look forward to this season even more.”

Timo Glock (BMW Team RLL, #25 MOTUL BMW M8 GTE): “I’m really excited to see what awaits me at Daytona because both the track and the BMW M8 GTE are totally new to me. I will really use the test drives ahead of the race weekend to get used to everything. I’m particularly looking forward to the very special experience of a 24-hour race, which I last had the pleasure of in 2015 when I competed at Spa-Francorchamps alongside Alex Zanardi and Bruno Spengler. I have strong team-mates and am hoping for a good result. The BMW M8 GTE and BMW Team RLL have already proved they have the potential in recent years.”