D’station Racing will continue to compete in two classes in the 2021 Super Taikyu Series, the ST-X (FIA-GT3) and the ST-Z (FIA-GT4).

In the 2020 season, the D’station #777 Aston Martin Vantage GT3 won two of the five races in the ST-X class and took pole positions in every qualifying race under Team Principal and former Major League pitcher, Kazuhiro Sasaki.

In the 2021 season, the GT3 will be driven by Satoshi Hoshino, Tomonobu Fujii, and Tsubasa Kondo as they fight for the series championship title. 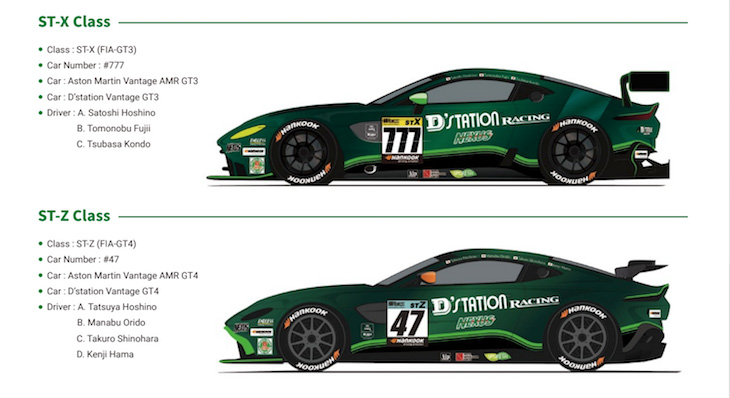 The 2021 drivers battling in the GT4 include Tatsuya Hoshino, Manabu Orido, Takuro Shinohara, and Kenji Hama.

D’station Racing’s parent company, NEXUS Group will continue to sponsor and contribute to the development of the Super Taikyu series.

“We are proud to announce that we will be entering two AMR machines for the 2021 Super Taikyu series.

“Super Taikyu began in 1991 using commercially available vehicles and we are excited to compete in two classes for its 30th season.

“Super Taikyu has become a wonderful series where drivers can genuinely enjoy high-level competition. Since incorporating FIA-GT3 and FIA-GT4 standards, better driver categorization systems in Japan were developed. This led to the establishment of the Pro/Am format, where a gentleman driver and professional driver must coordinate their efforts to be successful. With Aston Martin Racing as its team partner, D’ station Racing will enter the Vantage AMR GT3 and GT4 in pursuit of the series championship title in two categories.

“Since constructing our team factory in 2019, we have invested in capital equipment and assembled an experienced staff to establish a platform with increased capacity to support additional teams. We were in the process of assisting teams from abroad for the Super Taikyu, which would have brought out total entry capacity to four; however, due to the coronavirus pandemic, sudden changes in immigration regulations have made entry into races particularly difficult for international teams. In the near future, we hope to provide an “Arrive & Drive” package through our facility to expedite more race entries in Japan for more teams and drivers.”