Through the eight on-track sessions over the past week, including Roar Before the Rolex 24 testing and BMW Endurance Challenge practice and qualifying, five different GS manufacturers have set the best lap in a competitive session. It was capped Thursday afternoon when Kumo Wittmer put the #13 AWA McLaren 570S GT4 on pole with a lap of 1 minute, 52.773 seconds (113.644 mph). Six marques are represented in the first 11 GS qualifiers.

It was the second consecutive Motul Pole Award for Wittmer and AWA at the Daytona season opener. They finished a disappointing 26th in the race and were unable to race again the rest of the year due to pandemic travel restrictions.

“The lap was just flat out, right on the bitter edge,” Wittmer said. “I’m just glad to be under these wonderful shoes, these Michelins, and back into some proper racing, some IMSA racing. That’s where we all belong.

“I’m so proud of the team. We spent all year last year not being able to travel, but now we’re just so fortunate to come back and stick it on pole.”

TCR has witnessed similar tight competition among its four makes. In fact, the top four qualifiers in class Thursday were each from a different manufacturer. In the first TCR qualifying attempt of his career, Robert Noaker won the Motul Pole Award with a lap of 1:58.836 (108.124 mph) in the #84 Atlanta Speedwerks Honda Civic FK7 TCR.

“Just to be able to be racing in IMSA, I never thought in a million years I’d be able to be here, let alone get pole,” an excited Noaker said. “It was really all about the draft. Most of the track is just flat out on the straightaway so I was just able to set it up and put the perfect lap together.”

A closer look at the two classes reveals that some familiar favourites return, albeit with a number of new driver pairings.

Grand Sport (GS): The class displayed incredible parity last year, with six manufacturers netting at least one race win. More of the same is expected in 2021.

Kyle Marcelli won two races and the 2020 class championship with Nate Stacy in a KohR Motorsports entry. Marcelli returns to the team in the #59 entry but is teaming with Dean Martin and Chuck Cassaro this weekend. On top of that, KohR has changed from running an Aston Martin Vantage GT4 to a Ford Mustang GT4 this year.

CarBahn with Peregrine racing brings back Tyler McQuarrie, who won two races with Jeff Westphal on their way to second in the championship. McQuarrie will ride with Nolan Siegel and Tom Dyer in the #93 Audi R8 GT4 this weekend.

Turner Motorsport is back with a pair of entries but has split its top duo between the two BMW M4 GT4s. Where Robby Foley pulled stints in both entries last season, he’ll be solely in the #96 with Vin Barletta this year. IMSA great Bill Auberlen co-drives in the team’s #95 with Dillon Machavern.

Alan Brynjolfsson and Trent Hindman pair back up in the #7 VOLT Racing with Archangel Aston Martin, hoping to keep the momentum rolling from a pair of second-place finishes to close the 2020 season.

Riley Motorsports embarks on the Toyota Supra GT4 program in conjunction with Toyota Latin America. Drivers of the #14 entry this weekend are Javier Quiros from Costa Rica, Alfredo Najri of the Dominican Republic and Julian Santero of Argentina.

Wright Motorsports added a Pilot Challenge GS entry this year, the #16 Porsche 718 Cayman GT4 Clubsport, to complement its IMSA WeatherTech SportsCar Championship GT Daytona Porsche. It suffered a setback Wednesday when Ryan Hardwick crashed in practice and sustained a concussion that will sideline him the rest of the weekend. The car was withdrawn from Friday’s race with Hardwick also ruled out of the Rolex 24 where he was due to compete in the z=sister #16 GTD Porsche, replaced by Trent Hindman. 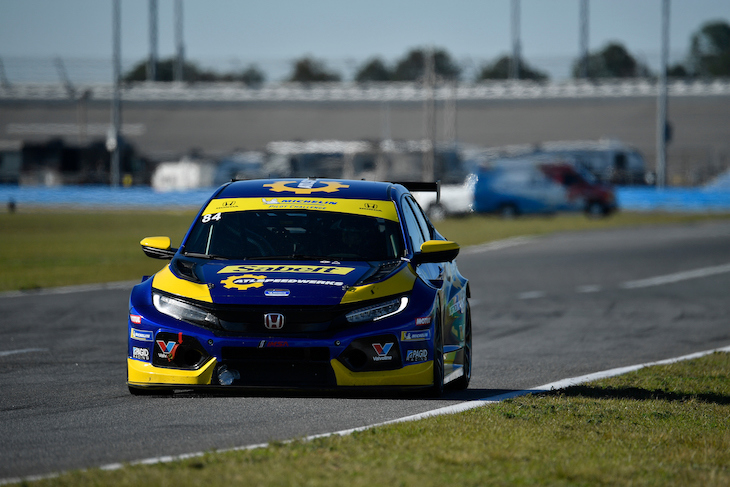 Touring Car (TCR): Bryan Herta Autosport with Curb-Agajanian controlled class competition in 2020, claiming seven race wins and sweeping the top three positions in the final standings. The team comes back with a three-car entry that includes two of the new Hyundai Elantra N TCRs along with one Hyundai Veloster N TCR that dominated last season.

Ryan Norman and Gabby Chaves claimed the 2020 TCR title for BHA. Norman is back, sharing the #98 Elantra this season with Parker Chase, but electrical problems have prevented the new car from turning a lap in practice or qualifying. Mark Wilkins and Harry Gottsacker are reunited in the No. 33 Elantra after finishing second in the TCR standings. Third in points a season ago, Michael Lewis teams with BHA newcomer Taylor Hagler in the #77 Veloster.

In addition to fielding its own cars, BHA is supporting and preparing five Velosters for other teams on the grid: two for Copeland Motorsports and one each for van der Steur Racing, Michael Johnson Racing and CB Motorsports. Rory van der Steur qualified his namesake team’s #19 Veloster in third.

The stiffest competition that BHA faced last season came from Road Shagger Racing, which won two TCR races and returns Gavin Ernstone and Jon Morley to the #61 Audi RS3 LMS DSG. It is one of four Audis in the Daytona field, led in qualifying by William Tally, fourth in the #17 Unitronic JDC-Miller Motorsports Audi.