Renger van der Zande took the #01 Chip Ganassi Racing Cadillac to the top of the FP1 timesheets with a lap in 1:34.649 ahead of the #31 Whelen/ Action Express Cadillac with Mike Conway quickest in the car. 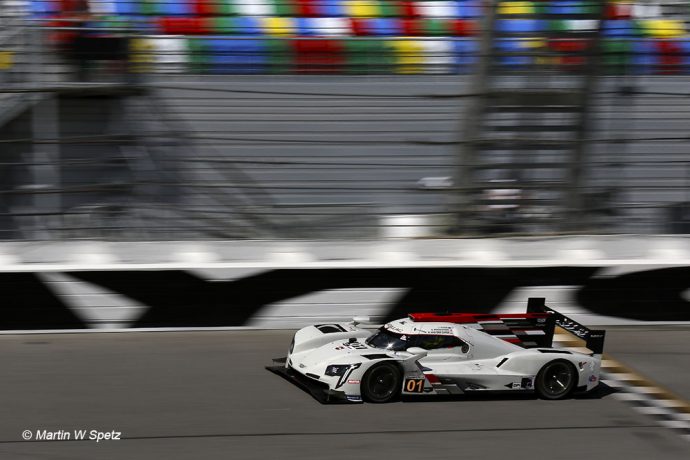 Harry Tincknell rounded out the top 3 in the #55 Mazda.

LMP2 was headed by Nico Lapierre aboard the #52 PR1/Mathiasen Oreca 07 Gibson. Ben Hanley and Job van Uitert were second and third fastest in the #81 DragonSpeed and #29 Racing Team Nederland Orecas a quarter second back from Lapierre.

Jeroen Bleekemolen topped LMP3, again ahead of the leading GTLM runners, the Dutchman posting a 1:42.416 in the #91 Riley Motorsports Ligier ahead of Colin Braun in the #54 Core Ligier.

Kenton Koch and Gabby Chaves were next up in the #6 Muehlner and #7 Forty7 Duqueine respectively, but this time slower than the leading pair of GTLMs. 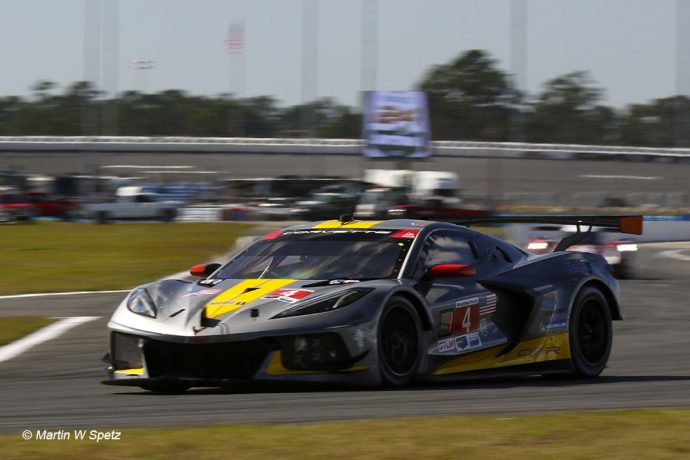 Tommy Milner led GTLM in the #4 Corvette C8.R with a 1:42.766, Antonio Garcia a quarter second back in the sister car with Jules Gounon third quickest in class in the #62 Risi Ferrari. 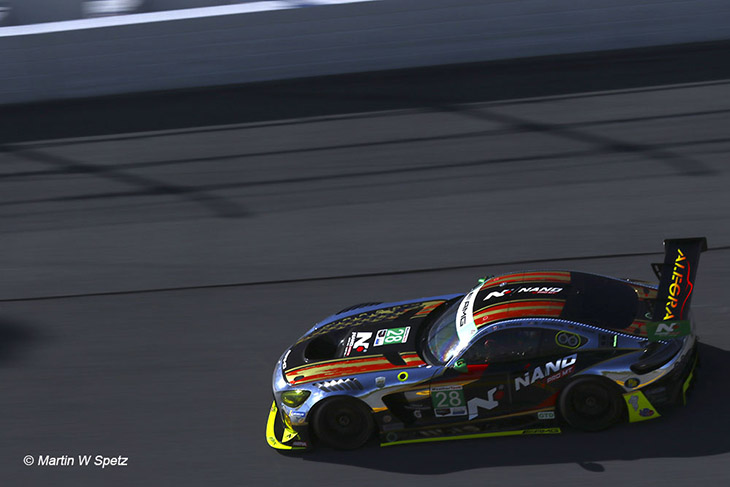 GTD saw Billy Johnson top the times in the #28 Alegra Motorsports AMG GT3 Evo ahead of the #88 EBM/ Hardpoint and #9 Pfaff Porsches of Earl Bamber and Matt Campbell respectively.

There were two interruptions to the session. The #111 GRT Lamborghini in the hands of Mirko Bortolotti, rolling to a halt at the start of the banking early on and a late session ‘off’ for Cody Ware in the #51 RWR-Eurasia Ligier at the Bus Stop. 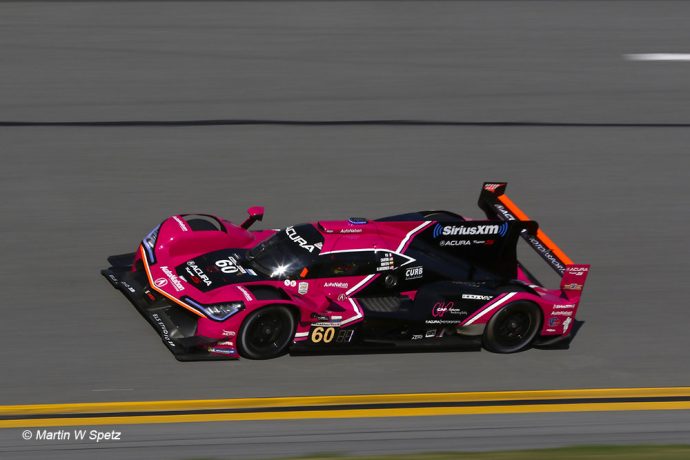 Thursday’s second session saw the first session of the meeting to be headed by an Acura as AJ Allmendinger put the #60 Meyer Shank Racing ARX 05 on top with a 1:34.287 to push the #01 Chip Ganassi Racing Cadillac of Scott Dixon off the top spot. Dixon, in turn, had edged out the long-time session leader Mike Rockenfeller in the #48 Ally Action Express Cadillac. 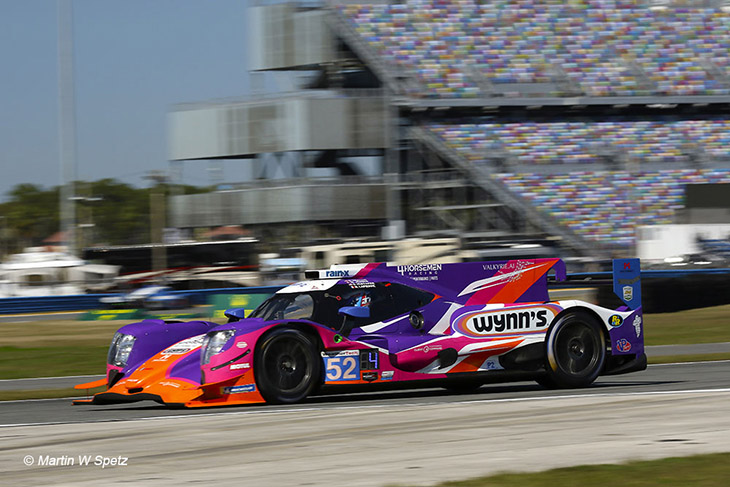 LMP2 was again topped by the #52 PR1/Mathiasen Motorsports Oreca, Mikkel Jensen the man at the wheel this time with a 1:35.979 ahead of Matthieu Vaxiviere in the #8 Tower Motorsport 20 and Robert Kubica in the #20 High Class 07s. 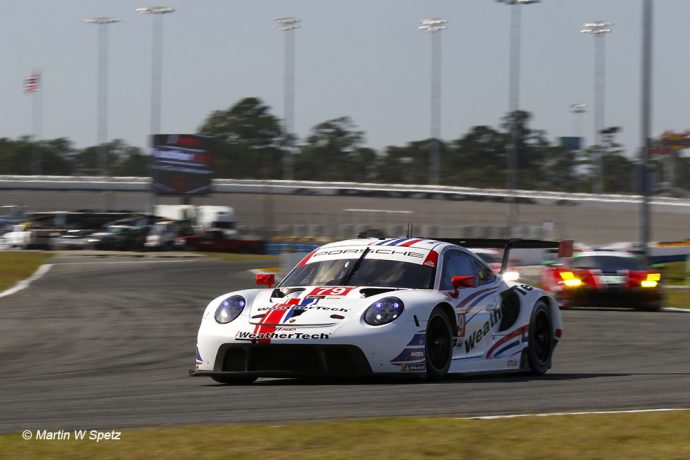 The top four GTLMs finished ahead of the lead LMP3 this time around with Gianmaria Bruni in the #79 WeatherTech Racing Porsche 911 RSR (1:42.600) heading James Calado in the Risi Ferrari and the pair of Corvette C8.Rs   LMP3 was again led by the #91 Riley Motorsports Ligier, Dylan Murry the man in charge this time (1:43.175) with the pair of BMW Team RLL M8 GTEs separating the class leader from the #71 and #38 Ligiers in the finishing order. 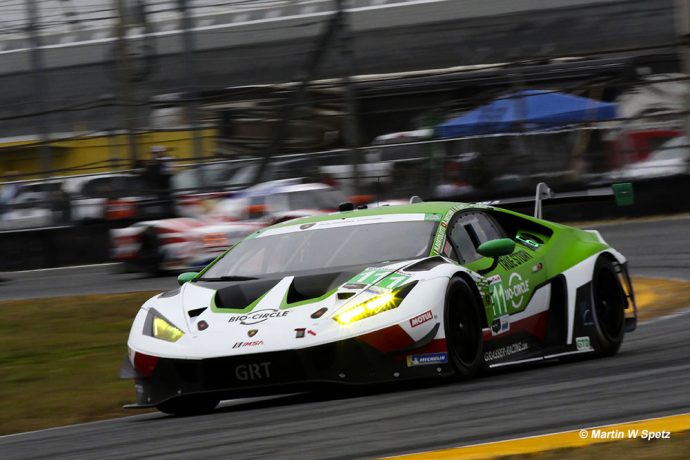 GTD saw the #111 Grasser Racing Team Lamborghini bounce back after earlier gremlins with Mirko Bortolotti a quarter second clear, his 1:45.690 ahead of a fine effort from Owen Trinkler in the #64 Team TGM Porsche 911 GT3 R with Katherine Legge third fastest in the #88 Team Hardpoint EBM Porsche.

Renger van der Zande in the #01 Chip Ganassi Racing Cadillac DPi topped the third practice session on Thursday evening with a 1:34.146, this the full night running before the race proper on Saturday. 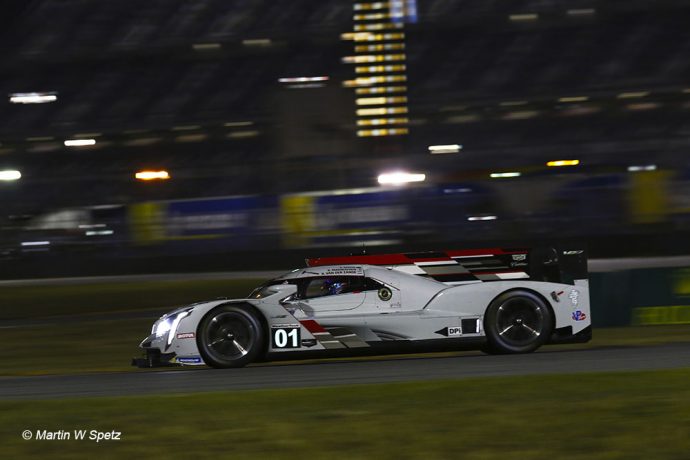 van der Zande headed his 2020 team, Wayne Taylor Racing, now of course with an Acura DPi, the #10 car in the hands of Ricky Taylor second fastest and three tenths back but ahead of a gaggle composed of the three other Cadillacs. 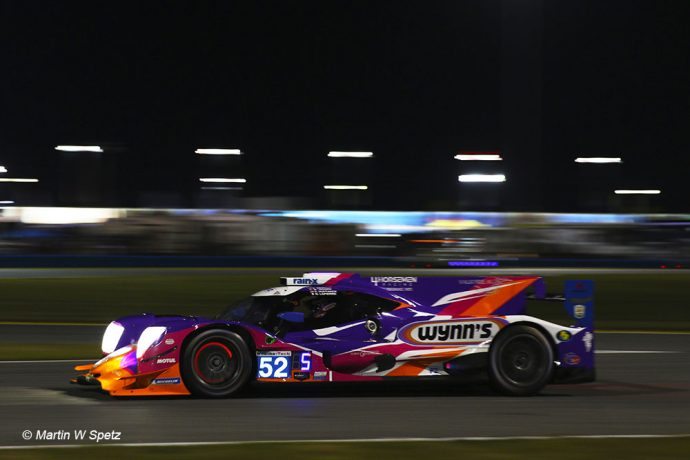 LMP2 saw Mikkel Jensen top the times, a 1:36.033 in the #52 PR1/Mathiasen Motorsports Oreca with the #8 Tower Motorsport and #20 High Class Racing Oreca next up in the hands of Matthieu Vaxiviere and Robert Kubica respectively. 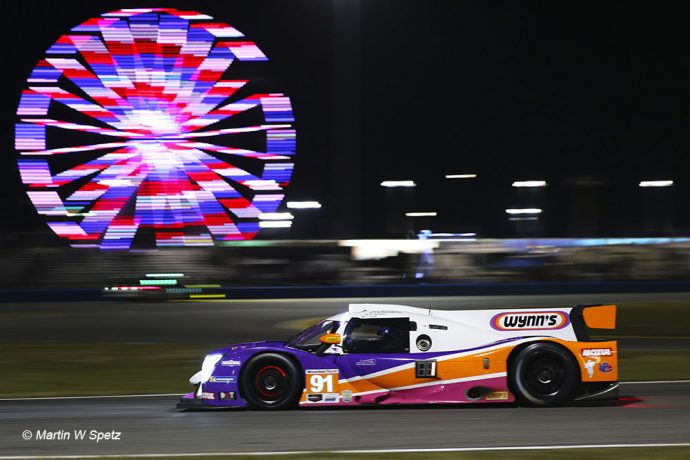 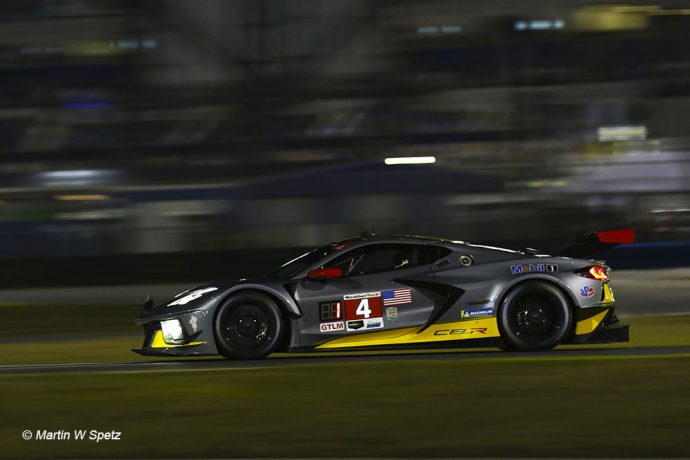 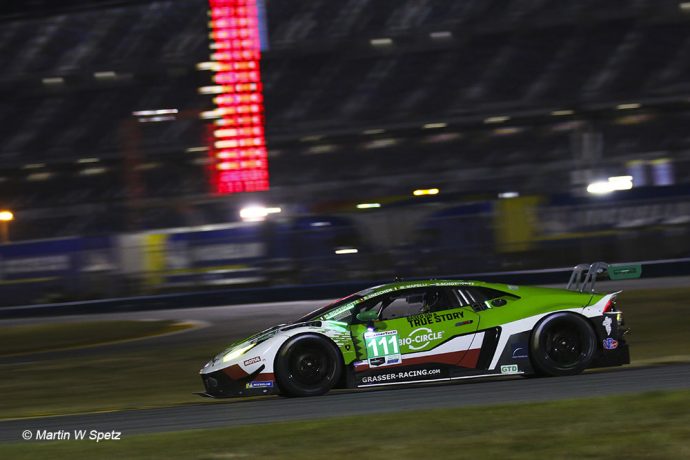 The final practice session before the race start on Saturday gave a fine indication of the potential for a very close race with four DPis across all three marques separated by just 53 thousandths of a second.  Loic Duval edged the top time in the #5 Mustang Sampling Cadillac from Kevin Magnussen in the #01 Ganassi DPi-V.R, the Frenchmans’ 1:35.085 just 12 thousandths faster than the young Dane. 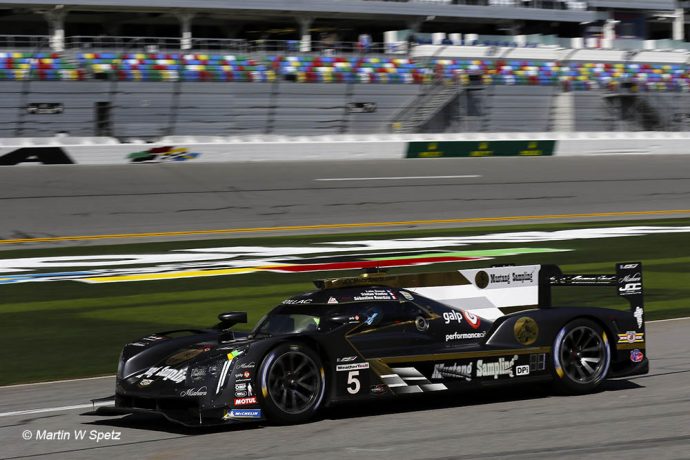 Oliver Jarvis in the #55 Mazda and Filipe Albuquerque in the #10 Wayne Taylor Racing were just thousandths behind! 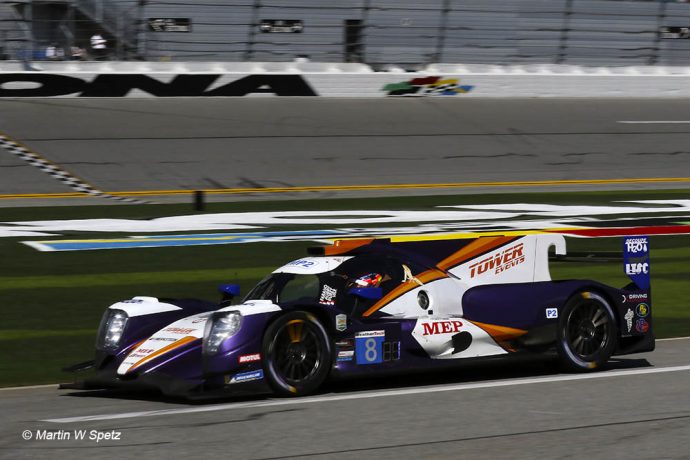 John Farano was credited as quickest in LMP2 with a 1:36.448 in the #8 Oreca Tower Motorsports Oreca, just over a tenth clear of Ferdinand Habsburg in the #20 High Class Racing car with Tristan Nunez third fastest in the #11 WIN Autosport 07. The session saw a red flag early on as Nico Lapierre stopped on track in the #52 PR1/ Mathiesen car. 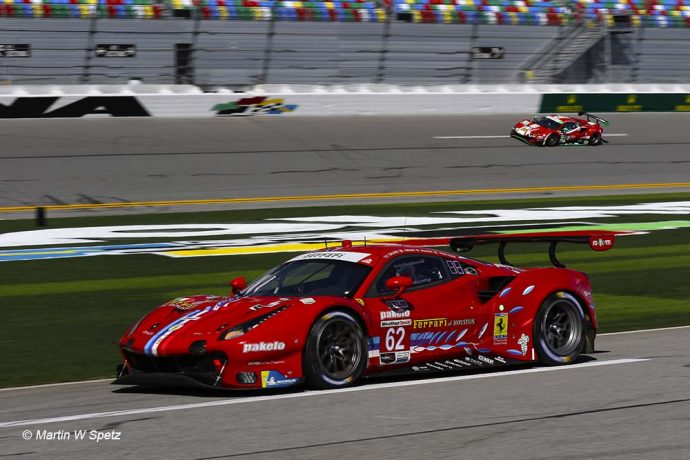 For the first time in the meeting all six GTLM cars were faster than the leading LMP3, a 1:42.584 for Alessandro Pier Guidi for Risi Competizione in the #62 Ferrari heading WeatherTech Racing’s Kevin Estre as the class was separated by just over four-tenths across all six cars.

Jeroen Bleekemolen headed another session in #91 Riley Ligier, a 1:43.073 a chunk ahead of Rasmus Lindh in the #38 Performance Tech Ligier with Moritz Kranz third in the #6 Muehlner Duqueine. 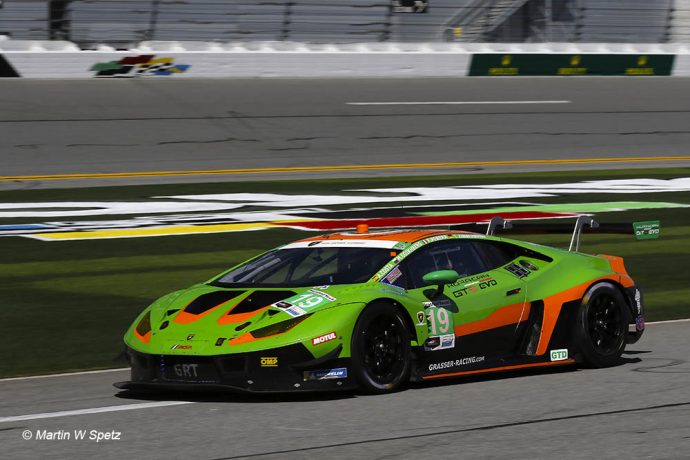 GTD saw a Lamborghini top the times again but this time it was the #19 GRT Huracan, Franck Perrera with a 1:45.578 heading Mirko Bortolotti by 0.154 seconds in the star #111 car with Daniel Serra third fastest in the #21 AF Corse Ferrari in third.

Frankie Montecalvo’s run was stopped with the #12 Vasser Sullivan Lexus needing assistance back to the pits bringing out a second red flag in the session with the #42 NTE Sport Audi already in trouble by then after contacting the pit wall early on, it would not emerge for the remainder of the session.