The #13 AWA McLaren 570s GT4 of Kuno Wittmer and Orey Fidani won the opening round of the 2021 Michelin Pilot Challenge season from Daytona. Wittmer led a quartet of BMW M4 GT4s to the finish line as the straight-line speed of the McLaren 570s GT4 helped AWA secure the win.

Wittmer was challenged briefly in the race’s final minutes by the #82 BimmerWorld BMW M4 GT4 and the #82 BMW M4 GT4 in the infield section of the course but once they rounded Turn 6 onto the high banks the McLaren pulled away from the BMWs. Bill Auberlen would go on to pass the #82 BMW into the bus stop and secure second-place for himself and teammate Dillon Machavern. 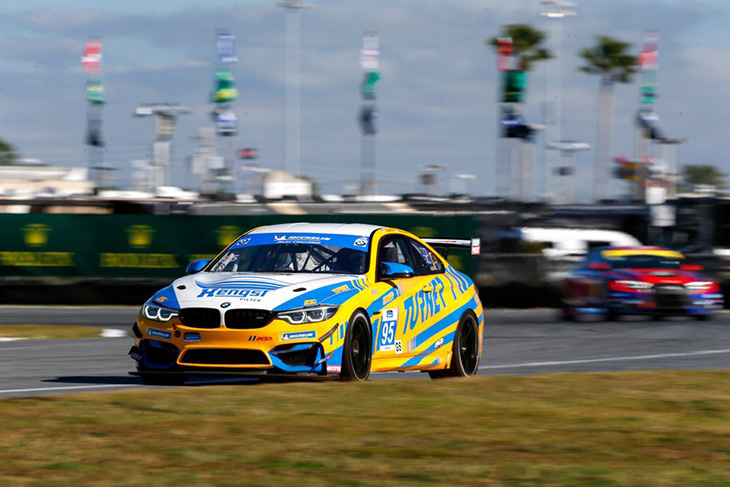 In a move that looked more like the final lap of the Daytona 500, Robby Foley in the #96 Turner Motorsports BMW M4 GT4 used the side draft to edge out Mike Skeen in the #82 BimmerWorld BMW by 0.059 seconds. That move secured a double podium finish for Turner Motorsports who will be looking for more hardware in tomorrow’s Rolex 24 race.

There were seven Full Course Yellows in the race, but the racing was remarkably clean compared to previous seasons. Given this is the first race of the season with many new teams and drivers, this round can sometimes be messy. This year’s race wasn’t, though, with close and respectful racing throughout the field. There were, however, eleven retirements in this race. A majority of those retirements came in TCR where we saw 17 entries from four different manufacturers battle it out. 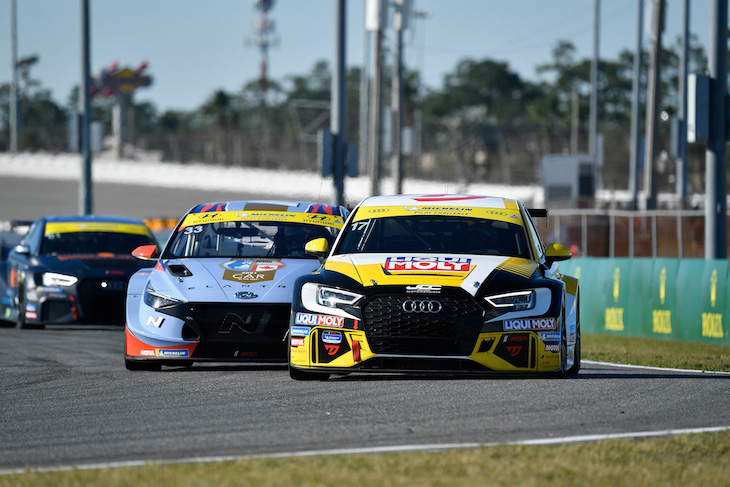 For much of the race, it seemed that the Hyundais that dominated the class last year would struggle but by the chequered flag, Hyundai Veloster N TCRs had moved into third, fourth, and fifth. The #54 Michael Johnson Racing Hyundai of Michael Johnson and Stephen Simpson rounded out the podium.

It was a disappointing debut race for the Hyundai Elantra N TCR cars, which are running alongside the Hyundai Veloster N TCRs. The two Elantras from Bryan Herta Autosport finished sixth and ninth in class.

The race in TCR was hampered by an incident in the bus stop which took out three cars that were all running in the top five at the time of the incident. The #85 Atlanta Speedwerks Honda Civic TCR came together with the #5 KMW Alfa Romeo Giulietta as the two cars. Brian Henderson, in the #84 Honda, tried to move to the inside of Tim Lewis Jr., in the #5 Alfa Romeo, but Henderson ran out of room to make the pass.

The two cars came together with Lewis Jr. being sent into the tyre barrier and Henderson being rear-ended by Jon Morley in the #61 Road Shagger Racing Audi RS3 LMS who was left with nowhere to go when the two cars in front of him collided.