The #26 G-Drive Aurus 01 has taken a dominant victory at Dubai for the first round of the Asian Le Mans Series, winning by over a lap to their closest rivals. Yifei Ye, Ferdinand Habsburg and Rene Binder were largely untroubled throughout the race after inheriting the lead after 23 minutes, extending their lead thanks to a nicely timed FCY just before the halfway point.

Racing Team India completed the top 5, in a solid debut for the new team. 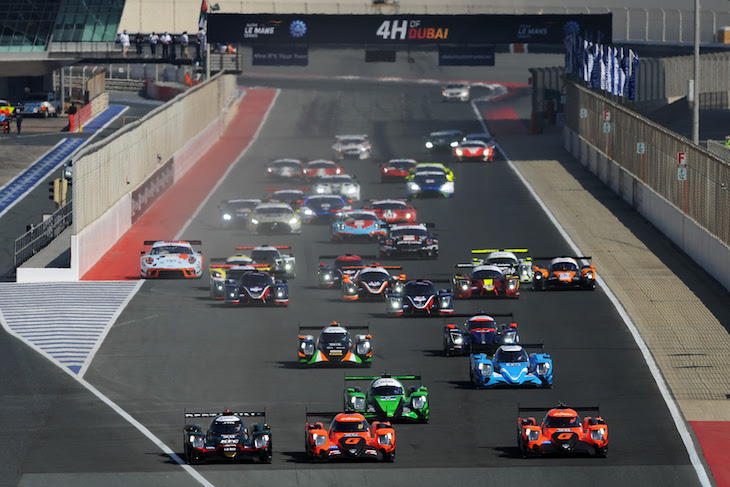 The start of the race saw Phoenix Racing take the lead at the hands of Simon Trummer after the first corner, as an audacious move from Sean Gelael in the #28 JOTA machine forced both G-Drive cars off track. But their lead was short lived; approaching the GT leader for the first time, Trummer was baulked in traffic, enticing a move from Gelael which resulted in contact and a broken rear deck for the Phoenix car. The #28 car would receive a drive-through penalty for the contact, but the pit stop to repair damage for the Phoenix machine would see it rejoin a lap down.

JOTA then set about trying to reel in the leading #26 G-Drive Aurus but were unfortunate enough to take a pit stop minutes before a FCY was called to recover the stricken #63 DKR Engineering Duqueine. This allowed the #26 G-Drive Aurus 01 to take essentially a free pit stop, exiting the pits almost a full lap ahead of the #28 JOTA Oreca.

While Stoffel Vandoorne and Sean Gelael pushed hard to close the gap, Yifei Ye’s stint in the #26 would stop the rot and then the JOTA car would fall on the wrong side of race control once again: a 5 Second Stop and Go Penalty was adjudged to the team for consistently gaining advantage by abusing track limits with Vandoorne pushing to catch the Chinese driver, effectively ending any shot of victory.

Despite some serious pace from particularly Franco Colapinto in the #25 G-Drive Aurus, the niggling fluid issue prevented any serious attack on the podium, with Phoenix Racing able to settle into a convincing third place in their LMP2 debut.

LMP2-Am went the way of ERA Motorsport #18 Oreca; Laskaratos, Merriman and Tilley winning the class by 3 laps over the #11 Eurointernational Ligier, who were down a driver after Phillip Mulacek pulled out of the race. 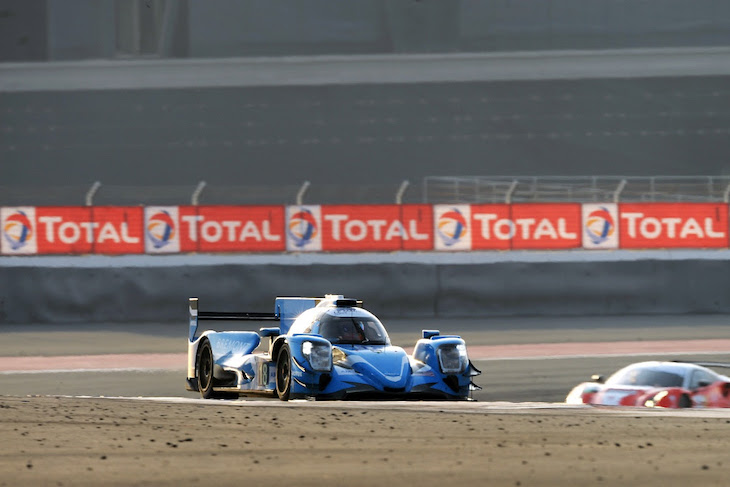 LMP3 saw a dominant performance from the #23 United Autosports Ligier, winning by over a lap over the #9 Neilsen Racing Ligier. Similar to the story in LMP2, United’s #23 car of Wayne Boyd, Manuel Maldonado and Rory Pettinen was largely untroubled after the sister #3 car of Duncan Tappy, James McGuire and Andrew Bentley fell back with a minor issue mid race. The #3 was still able to recover to third, helping score a double podium for United. 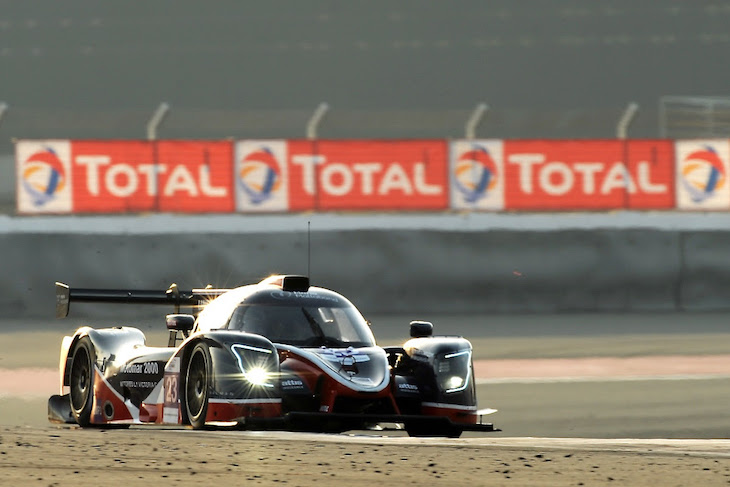 The race was typified by some great battling among multiple cars on competing strategies. Colin Noble putting in a great stint late in the race to propel the defending class Champions in the Neilsen Racing #9 Ligier from fourth up to second, passing Leo Weiss in the #4 Phoenix Racing Ligier and the battle of the race in LMP3 with Malthe Jacobsen in the #15 RLR M-Sport Ligier. Jacobsen able to fight back and run side by side with Noble through sector 1, but was unable to hold onto his tyres long enough to maintain the position.

Strong late pace from Andrew Meyrick saw the United Autosports #2 Ligier end the race in 4th, after starting a lap down due to a qualifying infringement. Meyrick passed both Bashar Mardini in the RLR M-Sport Ligier and Jan-Eric Slooten in the Phoenix Racing Ligier in the last stint to secure a 1-3-4 for United.

Phoenix Racing and RLR M-Sport finished up 5th and 6th respectively, with the other 4 LMP3 machines running into problems throughout the race. CD-Sport were in a competitive position until an 18-minute pit stop at the start of the last stint, before being adjudged a further penalty for undercutting the minimum pit stop time by 1 second on their second stop. ARC Bratislava had a troubled race in the Ginetta, making a total of 10 trips to pit lane, including 2 penalties. Neilsen Racing’s #8 car and the DKR Engineering #63 Duqueine were non-finishers, with the DKR machine expiring on track, requiring a FCY to recover it, just on halfway.

The GT race built to a cracking finish with competing strategies converging in the final minutes. The #40 GPX Racing Porsche outfit deciding to start the race with their pro drivers, with Julien Andlauer and Axcil Jeffries stretching out a 50-second lead by the last round of pit stops. However, Alfred Renauer in the #99 Precote Herberth Motorsport Porsche was within striking distance, reeling in the GPX Porsche at the tune of better than 1 second/minute heading into the closing stages.

The race was building to a thrilling conclusion, with the gap reduced to 3 seconds on the penultimate lap, until a mistake at turn 6 from Alain Ferte saw the #40 GPX Porsche spin and come to a halt, allowing Renauer to take the lead. While Ferte was able to get back on track, the car had lost the race lead, and was then given a penalty for track limit violations on the last lap. 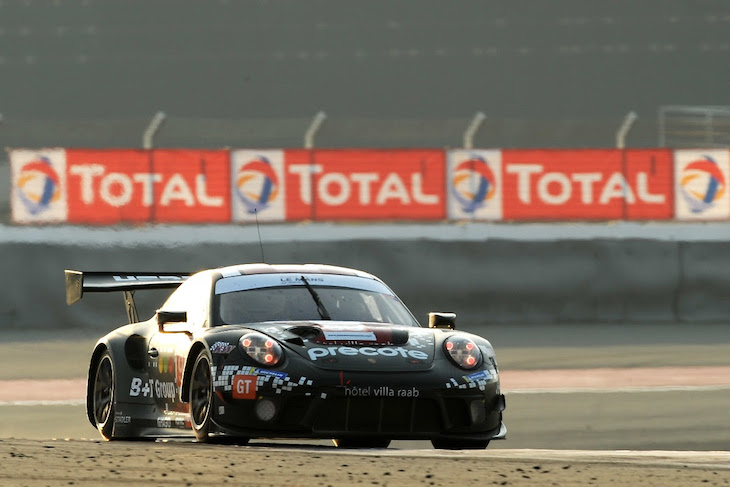 As of writing, the #40 is still listed as second on the race results, but it is still to be seen how that penalty will be applied. (UPDATE – the #40 was dealt a 30 second time penalty, dropping the Porsche off the podium, promoting the #7 McLaren to second and putting the #34 Walkenhorst BMW into 3rd after a stellar run through the field from Nicky Catsburg. 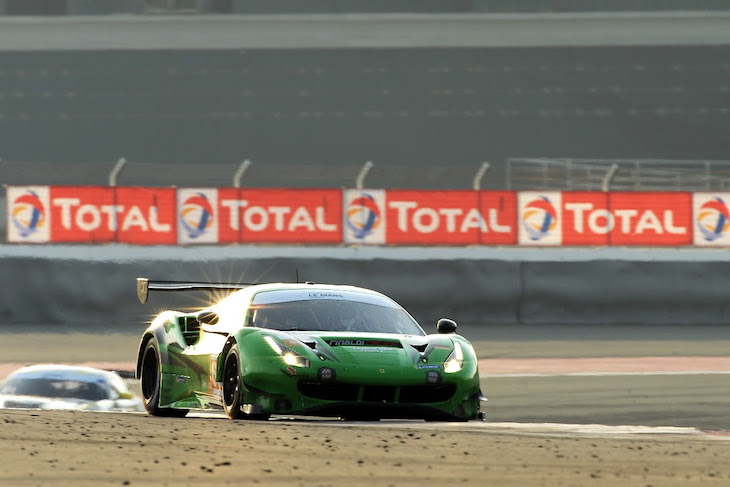 The Hub-Auto #1 Mercedes was well-positioned for a top 5 heading into the final 30 minutes but retired from the race with suspension damage as a result from earlier contact with the #54 AF Corse Ferrari.

The Asian Le Mans Series continues tomorrow at 12:45 Local Time (UTC+4) for the second race of the weekend, with the G-Drive Aurus pair sharing the front row.