2 Seas Motorsport will switch to the Mercedes AMG GT3 Evo from their previous McLaren 720S GT3s for the 2021 season for as-yet unconfirmed programmes as the team examine the impact of current and predicted travel restrictions on their European racing plans.

The team are set to take delivery of a pair of new AMG GT3s shortly.

Perhaps notably the announcement of the switch to AMG makes no mention of the previous commitment from 2 Seas to a two-car DTM entry. 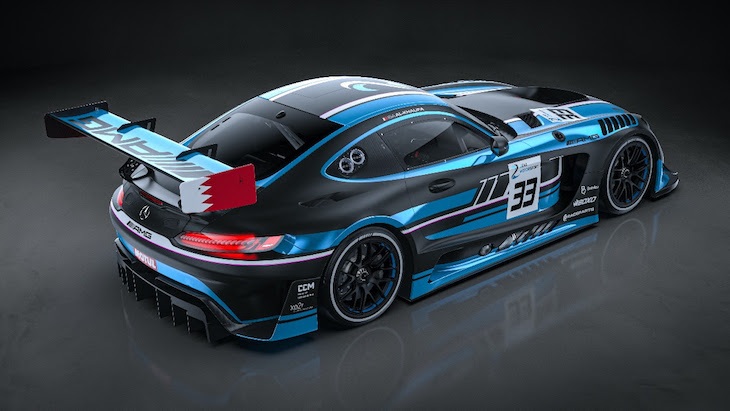 2 Seas launched operations in early 2020, debuting in virtual racing after the delayed start to the European season, finishing 2nd in the inaugural SRO E-Sports Championship and 4th overall at the 24 Hours of Le Mans Virtual, before contesting the rescheduled 2020 Intelligent Money British GT Championship, finishing 3rd in the GT3 Teams standings.

In 2021 the team has already claimed victory at the Gulf 12 Hours Bahrain last month, with team co-owner Isa Al-Khalifa joined by Ben Barnicoat and Martin Kodric in the likely last outing for the tram’s McLarens

Isa Al Khalifa, 2 Seas Motorsport team co-owner: “I am extremely pleased to confirm the new relationship for 2 Seas Motorsport with Mercedes-AMG as the first exciting stage of our 2021 plans. Mercedes-AMG is at the top of its game in motorsport, and the AMG GT3 has been hugely successful across all competitions since its introduction. At 2 Seas Motorsport, we are always looking to take on the next challenge and to learn from our experiences, and as a team, we have grown and developed hugely over the past 12 months, and I am confident we will continue to build and get stronger throughout this coming season.”

Nick Cristofaro, 2 Seas Motorsport team co-owner: “We are looking forward to a big year of racing together with Mercedes-AMG, and we are well underway with preparations for the new season. We are carefully reviewing the different options available to us to go racing with the current travel restrictions across Europe as they are. This includes the possibility of a return to the British GT grid for a second season, or possibly taking on the Fanatec GT World Challenge Europe powered by AWS sprint or endurance calendars, both are extremely appealing to us a team and to drivers.”

Stefan Wendl, Head of Mercedes-AMG Customer Racing: “We are very happy to welcome 2 Seas Motorsport joining the Mercedes-AMG family. The team stands for a new approach in motorsport: in 2020, they became first involved in virtual racing as a newly founded team and then successfully made the transition to real-world GT racing. Finishing in third place after the debut season in the strong British GT Championship reflects the potential that they have, and they have already built on that this year with an impressive performance to take victory at the Gulf 12 Hours. We wish Isa Al Khaifa, Nick Cristofaro and the team the necessary bit of racing luck for their planned programme with the Mercedes-AMG GT3 and will, of course, support them in the best Mercedes-AMG Customer Racing quality.”