Iron Lynx has revealed details of a major expansion in the Italian teams’ activities which will see, in 2021, the team will run 14 Ferrari entries across five championships including a parallel expansion of the all-female Iron Dames project which will see efforts in the FIA WEC, ELMS and at Le Mans.

Alongside the already confirmed move to the FIA World Endurance Championship (including a confirmed three-car entry in the 2021 Le Mans 24 Hours, a bolstered campaign in the ELMS and a return to the Michelin Le Mans Cup, the team will also contest the GT World Challenge Endurance Cup with six professional drivers in two official Ferrari works line-ups.

Meanwhile, the #51 Iron Lynx car will be driven by defending champion Alessandro Pier Guidi, Nicklas Nielsen, both official Competizioni GT drivers and Côme Ledogar who took pole position at Le Mans in 2020 and has distinguished himself at the wheel of the Ferrari 488 GT3, winning in the GT World Challenge and Asian LMS.

The team will expand its entry list to three cars in this year’s European Le Mans Series which will include official Competizioni GT driver, Miguel Molina, in the driver line-up.

Iron Lynx will also enter a strong car in the Michelin Le Mans Cup to defend its Team and Driver titles, and four cars in the Ferrari Challenge Europe championship.

Iron Dames, the special project created and led by Deborah Mayer with the aim of supporting women in motorsport, officially supported by FIA Women in Motorsport committee, will compete in five top level international competitions, including the European Le Mans Series where former Formula E, NASCAR and IndyCar driver Katherine Legge joins the driver line-up, the 24 Hours of Le Mans, the Michelin Le Mans Cup, the Ferrari Challenge and for the very first time, the FIA World Endurance Championship (WEC).

Andrea Piccini, Team Principal, Iron Lynx said: “We are thrilled to announce details of our most extensive motorsport season to date. 2020 was an incredibly challenging year for the entire motorsport community around the world so we are delighted to have such a busy year ahead of us. After lots of hard work over the winter months, we do believe that our time has come, and this is tomorrow.”

In addition to the new drivers and championship entries, the teams’ cars will also feature a stunning new livery created by celebrated design house, Garage Italia, who share the team’s attitude and vision. The new livery showcases the three distinctive colours of the team and represents the next evolution of a radical design language conceived three years ago.

Reflecting on the team’s unified attitude and approach, the Team paid special thanks to its enthusiastic partners and sponsors, namely: Ferrari dealer Niki Hasler AG based in Basel; Garage Italia who created the amazing new liveries and technical partner, Sabelt. A final thanks was paid to Sanremo Coffee Machines, Caffè Carraro, Fratelli Beretta, who are always on the track with Iron Lynx and Iron Dames.

Formed in 2017, Iron Lynx was founded in Cesena, Italy by Sergio Pianezzola and Andrea Piccini. It takes off from the founders’ dream to become a professional Racing Team. 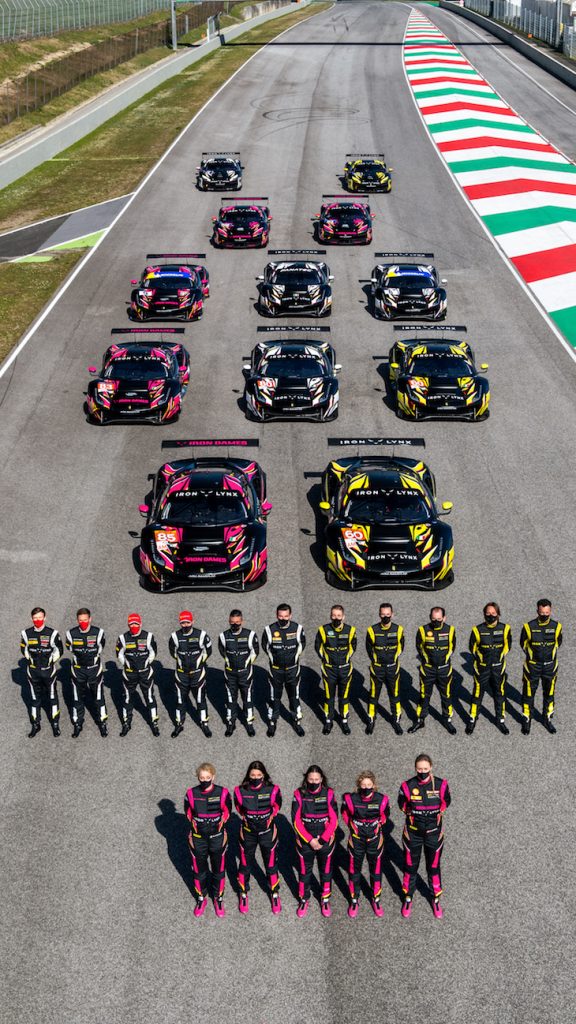