On Friday, 43 teams gathered at Okayama International Circuit for the first official pre-season test of the 2021 Autobacs Super GT Series. On-track action began Saturday morning, in front of a small, but devoted crowd of spectators eager to see their favourite teams and drivers on track for the first time this year.

This weekend, the GT Association (GTA) will be implementing unique performance adjustments across both classes. GT500 cars will have their maximum fuel flow limited, while GT300 cars will receive a minimum weight increase of roughly four percent – with different amounts for naturally-aspirated and forced induction vehicles. These changes will be made in addition to the standard Balance of Performance parameters implemented by the GTA.

The change is believed to be made as a safety precaution, with the series not having run in an official capacity at the 3.7 kilometre circuit since last year, and not having run a race here since 2019. It has not yet been determined if these adjustments will be used during the series’ opening round at Okayama, on 10-11 April – this weekend’s tests will likely determine their feasibility.

With those permutations, Test Session 1 got underway at 10:00 local time, under fine and sunny skies – and the two-hour session got on without any major incidents, save for a couple of spins and off-track excursions which did not disrupt the session. In GT500, it was the #36 au TOM’s Toyota GR Supra of Yuhi Sekiguchi and Sho Tsuboi leading Session 1. Tsuboi, who transferred to TGR Team au TOM’s this off-season, recorded the fastest time of the session with a lap of 1’18.352. 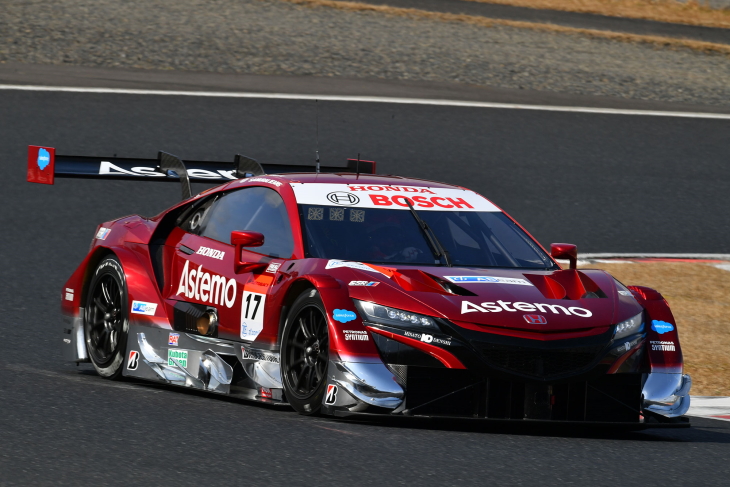 The top five cars in Session 1 were all able to crack the 1’19 barrier, including the trio of Bridgestone-clad Honda NSX-GTs which ranked second, third, and fourth. Bertrand Baguette was second-fastest in the ruby red #17 Astemo NSX-GT, followed by the #1 Stanley NSX-GT for defending champions Team Kunimitsu. However, one of the reigning co-champion drivers, Tadasuke Makino, will miss this weekend’s test – as he is recovering at home from a bout with meningitis that he suffered in December. 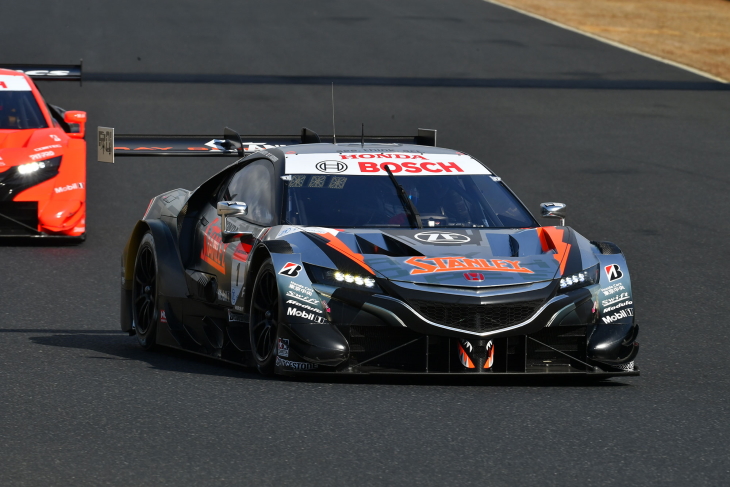 Veteran Honda works driver Hideki Mutoh was named as Makino’s substitute for the weekend in the silver & orange Stanley NSX-GT, and just 24 hours after being nominated, Mutoh was third-quickest. Nirei Fukuzumi in the #8 ARTA NSX-GT ran fourth, and the second TOM’s car, the #37 KeePer TOM’s GR Supra of Ryo Hirakawa, was fifth. 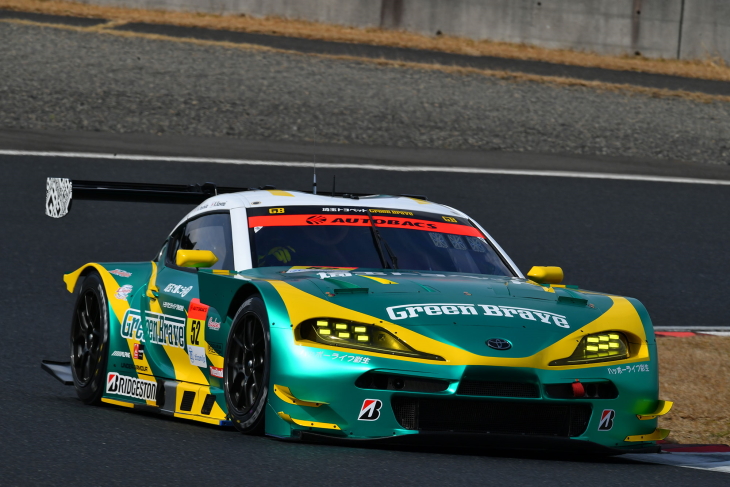 In GT300, last year’s top rookie Kohta Kawaai put the #52 Saitama Toyopet GreenBrave GR Supra GT300 on top of the table with a lap of 1’26.265. Takuto Iguchi was second-fastest in the new second-generation #61 Subaru BRZ R&D Sport, and the fastest GT3 car in Session 1 was the #25 Hoppy Porsche 911 GT3-R, with Takamitsu Matsui recording the third-fastest time.

After a two-hour pause, Test Session 2 commenced from 14:00 in the afternoon. The temperatures were much cooler than in Session 1 – a drop of about 6-8 degrees on the track surface, with air temperatures in the single digits. There was a cloud cover, and even reports of light rain early in the session. 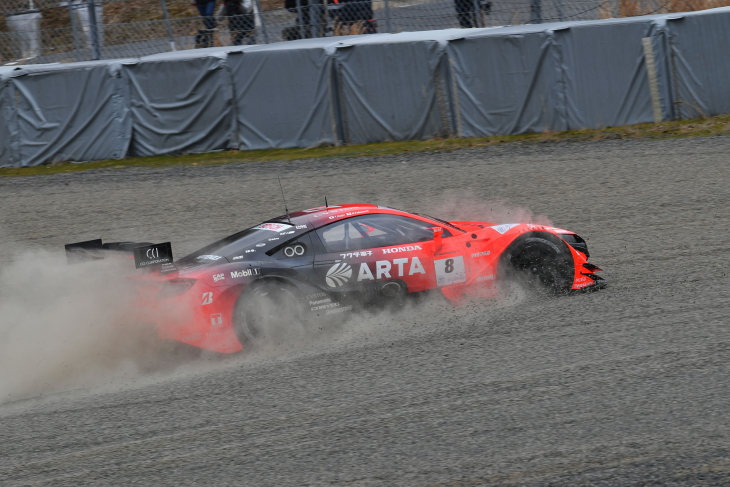 Two incidents brought out red flags during the first hour of the session: LM Corsa’s new #60 Syntium Toyota GR Supra GT300 stopped on the backstretch, with Team Director Akira Iida stating that a gearbox issue caused the stoppage. Tomoki Nojiri went off at the Hairpin Corner in the #8 ARTA NSX-GT, and found himself beached in the gravel trap – but was able to continue running later on.

After an hour and fifty-five minutes of mixed running, the final twenty minutes of the session consisted of two ten-minute “exclusive runs”, one for GT300 and one for GT500, similar to the final phases of practice during race meetings. 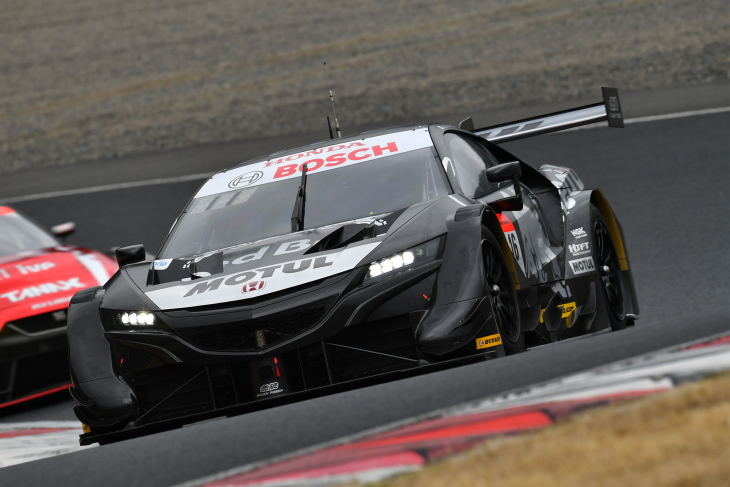 Before the start of the GT500 exclusive run, 22-year-old class rookie Toshiki Oyu had found his way to the top of the table aboard his carbon fibre-liveried #16 Red Bull Motul Mugen NSX-GT, proudly displaying its new Dunlop tyres. But in the final seconds of that ten-minute exclusive run, Oyu went quickest through all three sectors, and set the outright fastest time of the day with a lap of 1’18.121 – an impressive first day of official running in a GT500 car.

After the day, GT500 pacesetter Oyu remarked: “Getting the top time is good for not only myself, but also for the team which went through a drastic change in organization. Dunlop had always been quick in qualifying since last year, but it proved that once again today.”

“It was my first full-fledged drive [in the NSX-GT], but a GT500 car is different from either GT300 or open-wheel cars, and it was harder than I expected. You need to try to get the downforce working as you drive, and it is different from how I’m used to driving. But I know if you can adjust your driving style, you can drive fast. I’m getting much better at it, but I think there is a lot more room to improve. Anyways, it feels good to get the top time at the first running session of the season. I will do my best again tomorrow.” Second-fastest was the #37 KeePer TOM’s Supra, piloted by substitute driver Sena Sakaguchi – filling in for Sacha Fenestraz, who is unable to enter Japan due to visa issues. Two-time and defending GT500 champion Naoki Yamamoto was third in the Stanley NSX, and Yuhi Sekiguchi was fourth in the au TOM’s Supra. Nojiri was able to recover from his off-track excursion to place fifth in the ARTA NSX, just ahead of Baguette in the Astemo NSX. The best time for a Nissan GT-R belonged to new recruit Nobuharu Matsushita, who was seventh-fastest in the #12 Calsonic Impul GT-R. Hiroki Otsu in the #64 Modulo NSX-GT was eighth-fastest, Dunlop runners bookending the top eight. 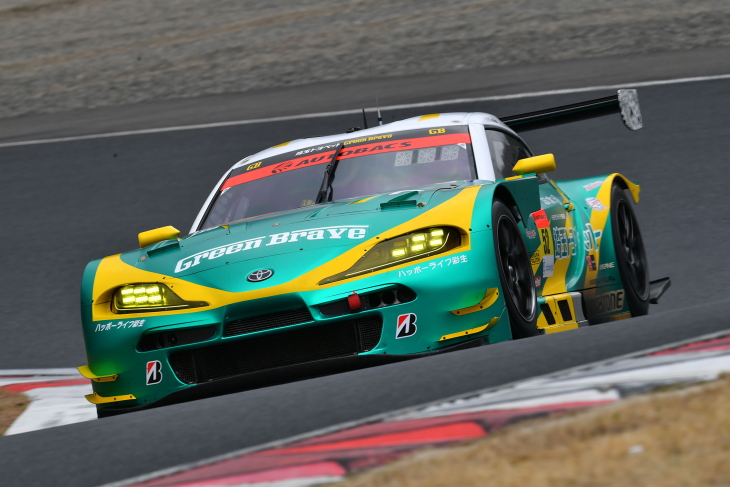 The #52 GreenBrave GR Supra recorded the best time in GT300 for the second straight session – this time it was veteran lead driver Hiroki Yoshida, who recorded the outright fastest time of the day with a 1’26.185.

“We switched roles between the morning and afternoon today, and we each executed different test scenarios in the tyre test. So, it was only to check how quick the tyres can possibly be – not to get a fastest lap time – and the setting on the car was not even for qualifying. We tried multiple sets of tires, but we didn’t find that much of difference, so we will do a long distance with about 4 sets tomorrow to see how it goes,” said Yoshida, who also shed some light on a sporting regulation change that will take effect in the opening race of the season – that all teams are required to change all four tyres, on their pit stop to comply with the regulations.

“Now, the regulations do not allow a no-tyre change pit stop at the season opener. We were doing all the preparation up to now assuming no-tyre change strategy, so in this test we need to find the tyre that can last just about a stint but has one-lap speed. We don’t know what kind of testing the rivals were doing and we were not doing attack laps either, so I don’t know how today’s lap time will convert to the actual situation. But, top time does feel good.” 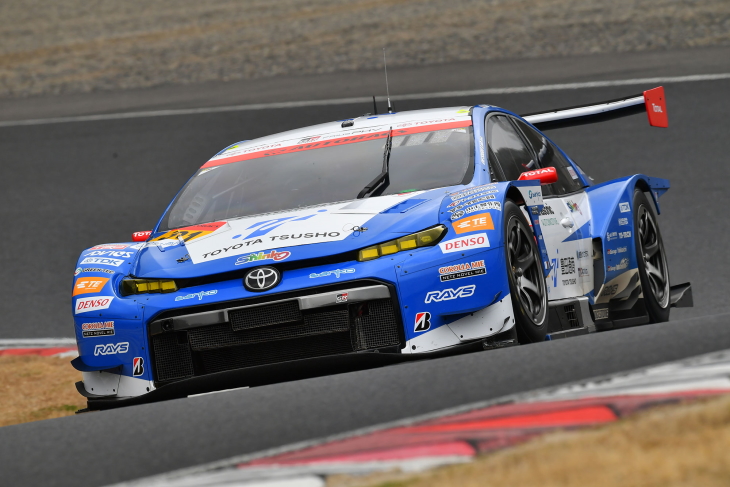 Just like Session 1, GTA GT300 vehicles were at the front of the pack, with the #31 Toyota GR Sport Prius PHV apr GT of Koki Saga in second, and the #61 Subaru BRZ of Hideki Yamauchi in fourth. Best of the GT3 cars was the #4 Goodsmile Hatsune Miku Mercedes-AMG GT3 of Tatsuya Kataoka, in third. 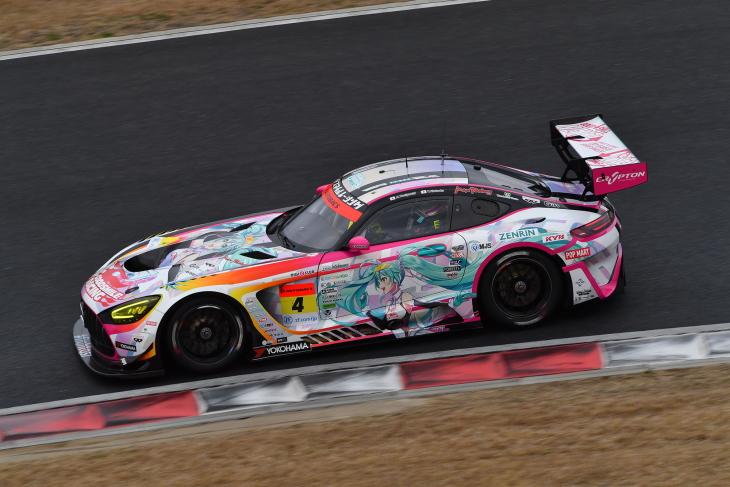 Ultimately, in both GT500 and GT300, the special performance adjustments did their intended job of constraining the speed of the cars, which were at best, about a second and a half away from approaching the official course records set in 2019.

Teams will be expected to prioritize race simulations when testing resumes on Sunday: Session 3 commences at 9:00 JST, while Session 4 concludes on-track activities starting from 13:50 JST.