The Autobacs Super GT Series wrapped up official testing from Okayama International Circuit on Sunday. All 43 teams at the circuit put priority towards testing different compounds of tyres for race simulations today.

It was a beautiful if cold, morning at Okayama. Test Session 3 began at 9 AM, air and surface temperatures were down to 4°C/11°C to start the two hours and fifteen-minute session, but had warmed up gradually towards the end of the session.

Only one red flag was needed, to pick up debris from the GT300 class #5 Mach Syaken GTNET Toyota MC86 early in Session 3. By that time, Yuhi Sekiguchi had set the benchmark time, with a lap of 1’18.473 aboard his #36 au TOM’s Toyota GR Supra. After the red flag, and following a Safety Car training session, Heikki Kovalainen in the #39 Denso Kobelco SARD GR Supra was able to post the top time of Session 3, and indeed the best time of Sunday – a 1’18.181. The aim for this test was not to set fast times, but Kovalainen’s lap was still just six-hundredths of a second off of Toshiki Oyu’s best lap from Saturday in the #16 Red Bull Motul Mugen Honda NSX-GT. The two-time and reigning GT500 Champion Naoki Yamamoto set the second-fastest time of the day in his #1 Stanley Honda NSX-GT, with a 1’18.277. Last year’s runner-up, Ryo Hirakawa, was third-fastest in the #37 KeePer TOM’s GR Supra, leading his teammate Sekiguchi who settled into fourth. Once again, it was the Bridgestone-clad #12 Calsonic Impul Nissan GT-R that set the fastest time out of the Nissan stable, courtesy of Nobuharu Matsushita, who ended Session 3 fifth-fastest, ahead of Saturday pacesetter Oyu in the #16 Red Bull NSX-GT in sixth, the best of the non-Bridgestone runners.

After the test, Kovalainen – now about to begin his seventh season as a GT500 driver with Toyota and SARD – remarked: “Today, we checked the lap times in the morning session and then checked the long-runs in the afternoon. I’m not sure if we completed the whole test menu, but we were able to find some good ideas on how to set up the car, so it was a satisfying test.”

“We have to choose the tyres for the season opener based on today’s result, so, in a way, the test is not finished yet. Anyways, the direction on the tyres became clear. I don’t know what the actual level of our lap time is, but the car didn’t feel bad, so I think we can take on the season opener with a positive feeling.”

Just as it was on Saturday, Sunday afternoon saw a cloud cover roll over the 3.703-kilometre circuit, but no rain. Test Session 4 kicked off at 13:35 in the afternoon with a simulated race start, cars lined up in rows of two behind the Safety Car, which peeled off into the pits as the field accelerated once the green light came on, just like the real thing. Saturday times set the grid for this simulated start, so the #16 Red Bull NSX had won the “pole position.” This session was carried out as a true race simulation, with teams repeating long stints on harder compound tyres, and there was less of a priority on outright fastest laps. 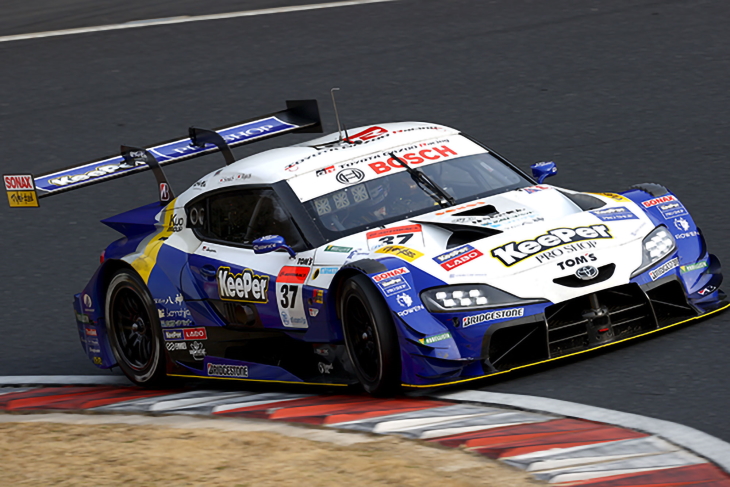 With that said, the fastest time of Session 4 belonged to super-sub Sena Sakaguchi in the #37 KeePer TOM’s GR Supra, with a 1’19.224. The 21-year-old GT300 race winner seems more than ready to step in if Sacha Fenestraz isn’t able to enter Japan for the start of the season. The team that completed the most laps on Sunday, with 152 laps, was the Michelin-clad #23 Motul Autech GT-R of Tsugio Matsuda and Ronnie Quintarelli – the latter of whom set the second-fastest time in Session 4. There was only one red flag during the final session when the #38 ZENT GR Supra stopped on track with a driveline issue.

Over to GT300, where a surprising name topped the timesheets in the category for Sunday: Natsu Sakaguchi set the quickest time for JLOC and the #87 Granseed Lamborghini Huracán GT3 Evo. The 25-year-old, joining JLOC after four seasons with Team Mach, clocked in with a best time of 1’26.138, the outright fastest GT300 time over two days of testing, edging out Kohta Kawaai’s best lap from Saturday by just a few hundredths of a second.

“The brakes (on the Lamborghini) are a lot different from the Mother Chassis car that raced with until last year. It feels I can push farther into the corner,” said Sakaguchi about his new car. “I was given multiple chances to test up to now and I was not adopting well (to the car) at first, but today I think I fit perfectly. I was able to concentrate on my driving today because Kosuke (Matsuura) worked on setting up the car yesterday. It was so easy to drive and felt good.”

“I didn’t think it was going to be a top time when I was driving, but I felt right away it must had been a good lap time. It’s not certain yet if we can actually target the win at the season opening race, but I will try to learn from Matsuura-san because he has a lot of experience and make it a good season for the team.” 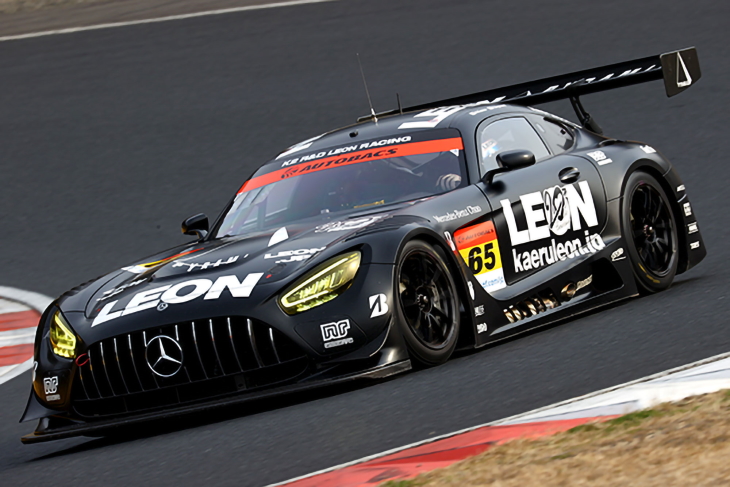 After running just 49 laps on Saturday due to a transmission issue, the #60 Syntium LM Corsa Toyota GR Supra was able to complete 113 laps on Sunday – and veteran driver Hiroki Yoshimoto clocked the fastest time in Session 4, with a 1’26.934.

A handful of drivers and teams will now regroup in a couple of days for Super Formula and Super Formula Lights testing at Suzuka Circuit from Wednesday to Friday. But as it pertains to Super GT, the series will be back in action for the second and final pre-season test at Fuji Speedway on 27-28 March – followed in two weeks by the opening round of the 2021 Autobacs Super GT Series at Okayama, on 11 April.