Following on from a hat-trick of GT World Challenge Europe (GTWCE) championship titles in the Endurance Cup over the last three years, Barwell Motorsport will embark on its first ever full-season programme in both the Sprint and Endurance Cups in 2021. The British team claimed the Endurance championship crowns in the Am Cup in both 2018 and 19, and was then victorious in the Silver Cup last year.

2021 will see Barwell’s first foray into the Sprint championship with Ramos returning to the team having been part of the title-winning effort in 2018 when he claimed Am Cup wins at both Monza and Silverstone alongside long-time Barwell drivers Adrian Amstutz and Leo Machitski. Chaves will make his debut with the team in 2021.

It will be a combination of 2018 and 2019 Am Cup Champions Amstutz and Machitski who will join Ramos and Chaves for the Endurance events this year.

Amstutz returns to racing after a 2020 sabbatical and will take in the Monza, Nurburgring and Barcelona 3-Hour races as well as the Paul Ricard 6-Hours.

Leo Machitski meanwhile will drive at Spa in an attempt to make it two Pro-Am victories a row there with Barwell alongside a return to the British GT Championship with the team as his main full-season focus. 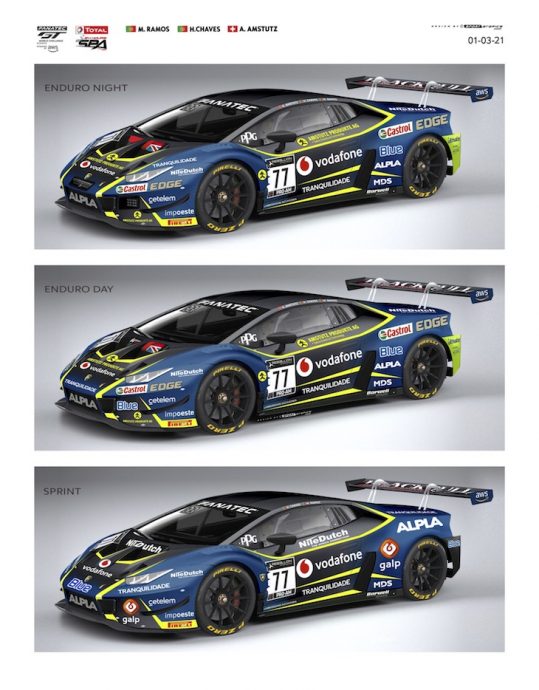 The fourth driver for Spa 24 Hours has yet to be decided, but it is highly likely to be one of the Pros from Barwell or Lamborghini Squadra Corse’s current roster.

The team will commence its pre-season preparations at the Official GTWCE test at Paul Ricard on March 25-26, before the race season starts with the Endurance Cup Monza 3-Hours on April 17-18.

Mark Lemmer, Barwell Motorsport Team Principal: “Going for a GTWCE overall class title and competing in Sprint is something the team has been wanting to do for a few years now. And we know with Miguel and Henrique on board for the full season we should be challenging for Pro-Am victories from round one, with our fantastic Lamborghini Huracan GT3 Evo.”

Henrique Chaves: “I’m really pleased to be joining Barwell Motorsport for the upcoming 2021 season. The team has a very good record in the past few years, which shows quality and ambition, so I’m very excited to start working with them and to pursue race wins and titles. I’m also very happy to keep racing alongside Miguel and also to join with Adrian, Leo and Barwell Motorsport, so we all can achieve great success this year!”

Adrian Amstutz: “It feels great to be returning to my racing ‘family’ at Barwell for another season. I missed racing when I was out of the cockpit last year and I am really keen to get back in the beautiful Huracan. And I’m sure with Miguel and Henrique on board I will have a great chance of more success !”

Leo Machitski: “I just love the Spa 24 Hours and having won there in two classes it’s a race that’s very special to me. So when the opportunity came up to go back again this year with my old buddie Miguel Ramos I jumped at the chance! I know how good the Barwell Lambo will be there and so I’ve got a great chance of making it two Pro-Am wins in a row.”