Daytona Prototype international (DPi): The #10 Konica Minolta Acura ARX-05, winner at the season-opening Rolex 24 At Daytona, holds an eight-point lead (688-680) over the #55 Mazda Motorsports Mazda RT24P DPi, which is the only DPi entry to finish on the podium in each of the first two races. The Sebring-winning #5 car sits third on 645 points.

The win for the #5 JDC Miller/ Mustang Sampling Cadillac also saw the distance record broken by a single lap, 349 laps.

Following on from our story referencing the double victory at Sebring almost exactly 10 years on, of David Porter’s ex-factory, ex Oreca Peugeot 908 HDI FAP, the weekend before last, Loic Duval went one better, scoring his second overall victory ten years and one day after forming part of that crew in 2011, which was incidentally the last time an all-French crew took the overall win at Sebring before this year! 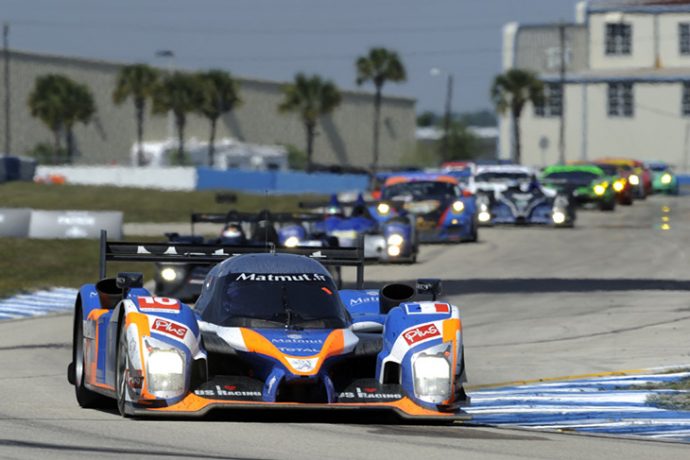 All seven DPi contenders led at least once in the race, both Acuras finishing with contact-related damage, the #10 running for much of the race with a damaged right side intercooler after contact with the #14 Lexus, the #60 with handling issues. 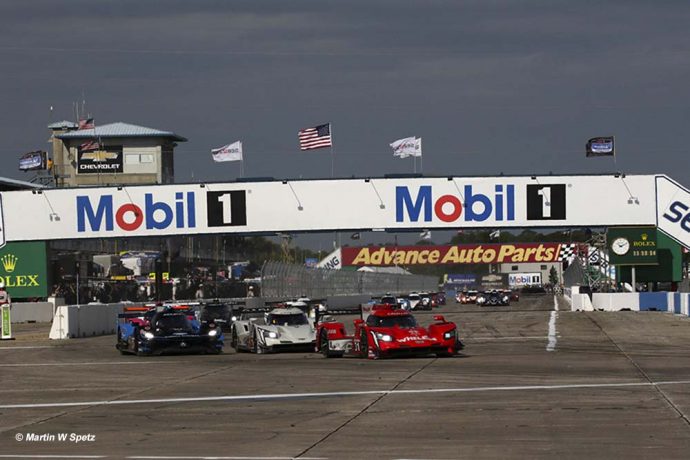 The relegation of the #48 Ally/ Action Express Cadillac to last in DPi was confirmed immediately post-race after the team were found to have left Simon Pagenaud aboard in error for 50 seconds longer than the permitted four hours in any single 6 hour period. 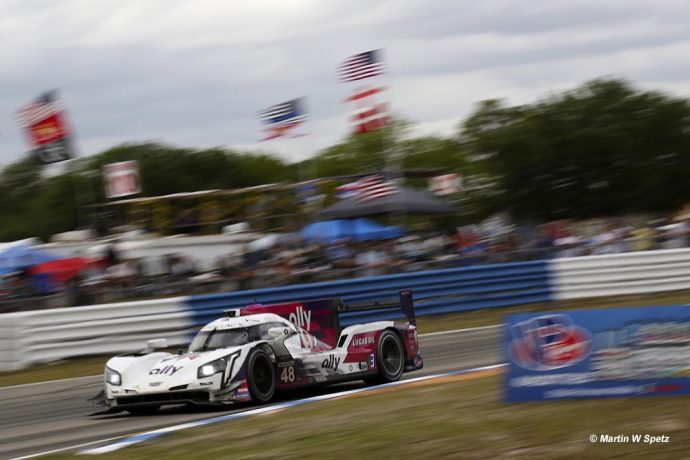 LMP2: Since the Rolex 24 does not count toward the LMP2 season championship, only the Sebring Twelve Hours results are reflected, which puts the #52 PR1 Mathiasen Motorsports ORECA LMP2 07 at the top, with a 32-point edge (382-350) over the #18 Era Motorsport ORECA. 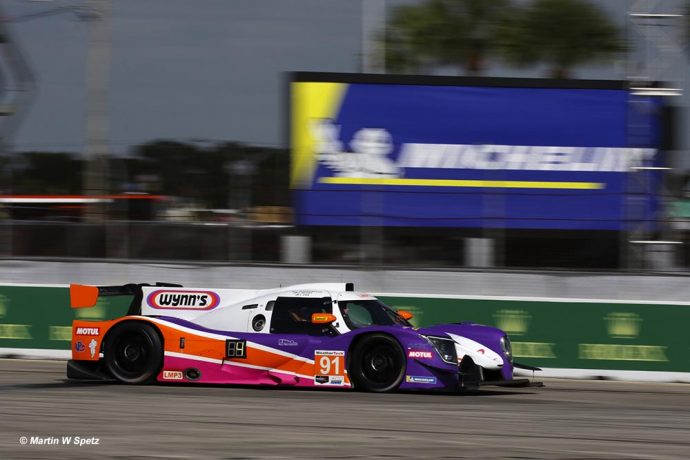 The #52 overcame both a drive-through penalty for not making the grid on time and a spell behind the wall for a suspension repair to win the race.

It was confirmed at Sebring that the #52 will race in the entire WeatherTech Championship season, making it now a four-car field with the #8 Tower Motorsports car (which requires a replacement Chassis after Timothe Buret’s huge Turn 1 accident), the #18 WIN Motorsport car and the #18 Era Motorsport machine. 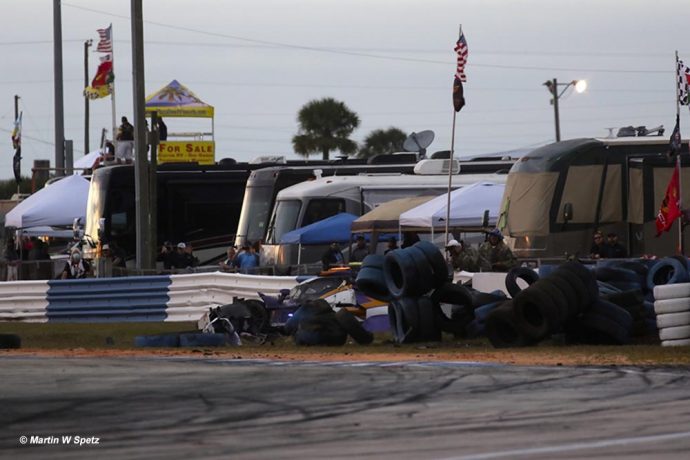 The #22 United Autosports Oreca will race at Watkins Glen and Petit Le Mans, the car losing out on a podium finish at Sebring after being excluded post-race for an excessively worn compliance plank. The Oreca that raced at Sebring, initially understood to have been intended for a second FIA WEC entry, will remain at United’s new US base. 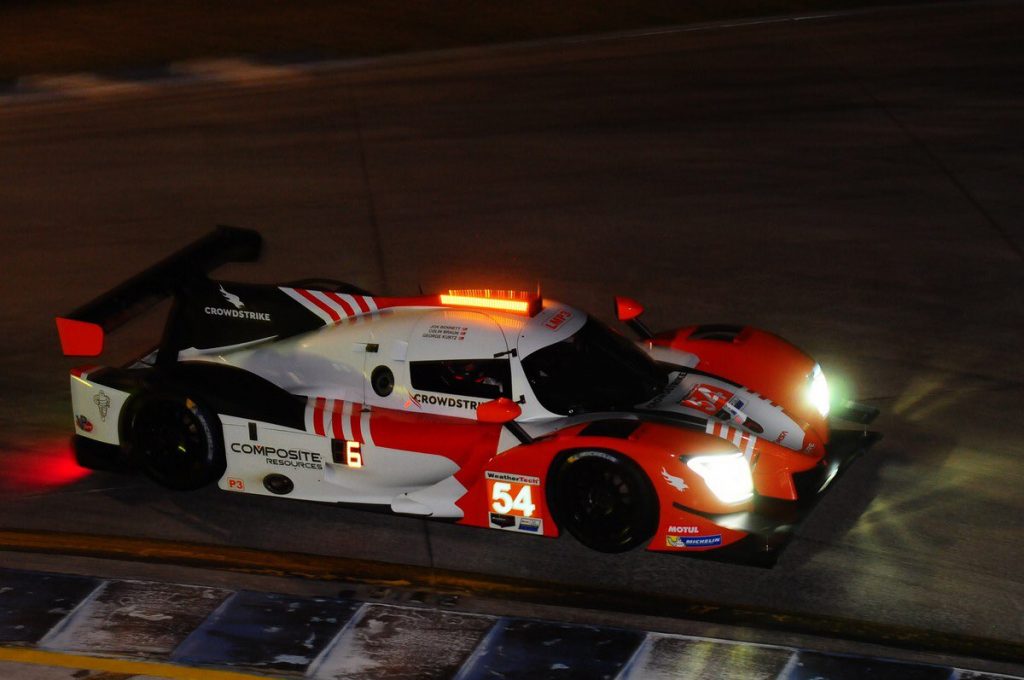 The late challenge at Sebring from the #7 Forty7 Motorsports Duqueine was stymied by a failed primary fuel pump. 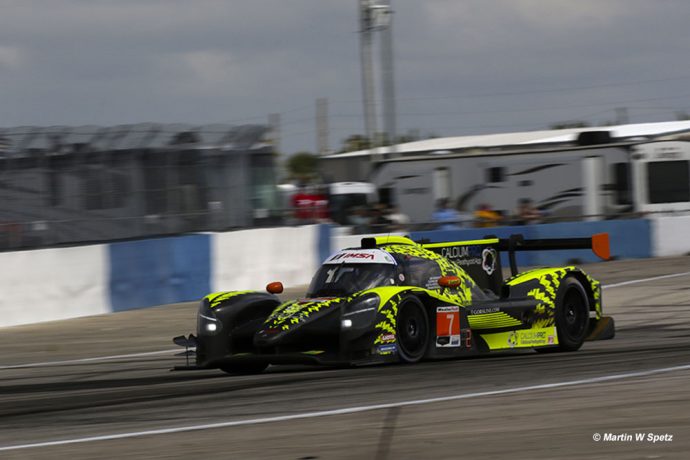 GT Le Mans (GTLM): Despite a late-race altercation that relegated it to a fourth-place Sebring finish, the #3 Corvette Racing Chevrolet Corvette C8.R maintains a 41-point lead (697-656) over the #79 WeatherTech Racing Porsche 911 RSR-19 that won on Saturday. The #3 Corvette won the Rolex 24 in January.

The win came for WeatherTech Racing with one of a pair of ex-factory 911 RSR-19s that the team have available this season, they have tested with both but have used the Proton Competition-owned car in both races this season, this the same car that won in factory hands at Sebring late last season and extends (and completes) the Porsche marque’s GTLM winning streak to four races. 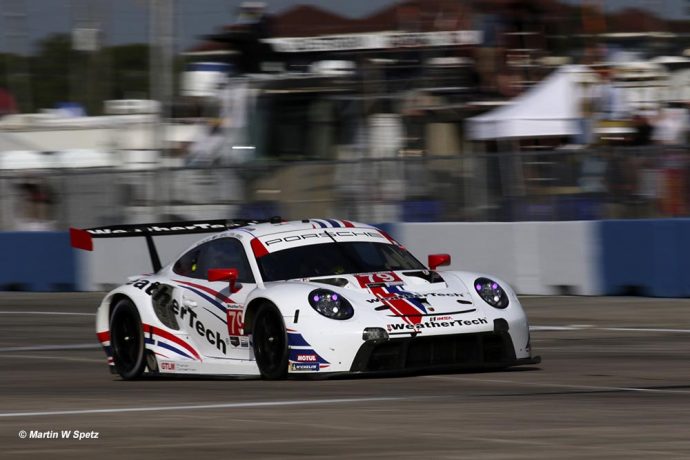 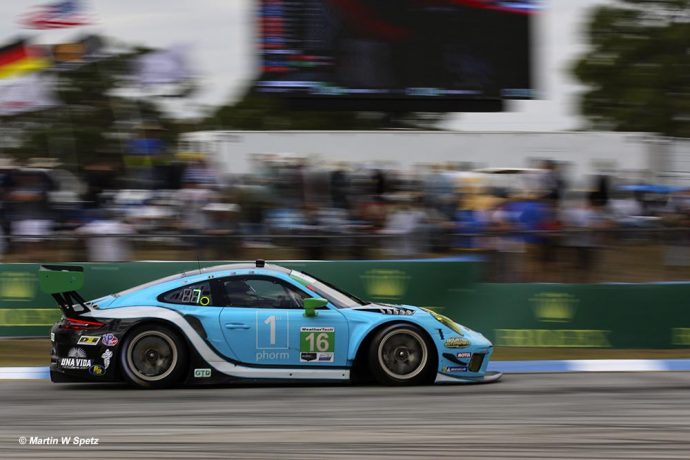 The driver standings vary slightly, with the #16 trio of Patrick Long, Jan Heylen and Trent Hindman 23 points ahead of Maro Engel, who drove for the winning #57 Winward Racing Mercedes-AMG GT3 in the Rolex 24 and the ninth-place #75 Sun Energy 1 Mercedes at Sebring, classified despite its late-race shunt on the start/ finish straight.

As with GTLM, it was a repeat Porsche Sebring race win, their streak now three in a row, though a first for Pfaff Motorsports at Sebring and also for Laurens Vanthoor who, until Saturday had not registered a Sebring win. 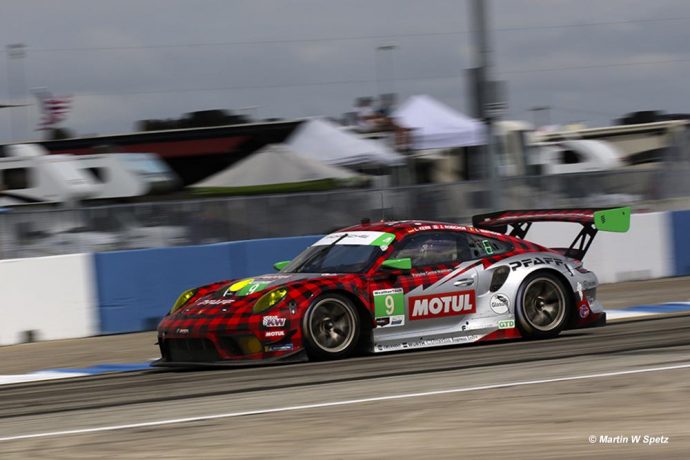 The GTD victory made it 76 class wins for Porsche at the 12 Hours of Sebring plus 18 overall wins.

DPi: The #10 Acura leads here again, four points better (27-23) than the #55 Mazda, which nearly corralled maximum Endurance Cup points at Sebring by leading at the first two stages and then finishing second.

LMP2: The #8 Tower Motorsport ORECA is two points ahead (26-24) of the #18 Era Motorsport ORECA, winners of the Rolex 24 At Daytona. The #52 PR1 Mathiasen Motorsports ORECA is just three points from the lead (26-23) after sweeping the maximum 15 points at Sebring by leading at every stage.

LMP3: The #74 Riley Motorsports Ligier holds a strong 10-point lead (31-21), built by the car dominating and leading at all four junctures of the Rolex 24. The #33 Sean Creech Motorsport Ligier is in second place.

GTLM: The #3 and 4 Corvettes are tied for the lead with 25 points. The #25 BMW Team RLL BMW M8 GTE is just two points back after leading at Sebring at the four- and eight-hour marks, and then finishing second.

GTD: The #9 Pfaff Motorsports Porsche 911 GT3R swept in maximum points at Sebring, leading at all stages including the race finish, to tally 15 points and take the class lead in Endurance Cup (23-21). It’s a small advantage, however, with the #16 Wright Motorsports Porsche just two points back and the # 1 Paul Miller Racing Lamborghini Huracán GT3 three points behind.