In the Sprint Cup, the team a Pro-Am class car for Alexander West and Aston Martin factory driver Jonny Adam, who will then be joined by Chris Goodwin for the Endurance Cup races.  This was a successful line-up in 2020 with West and Goodwin going on to win the Pro-Am Endurance title. Adam had another commitment at the final round when many of the race calendars clashed after the mass rescheduling caused by the pandemic. This meant that he missed out on the title won by his team mates so he is keen to take the crown this year. 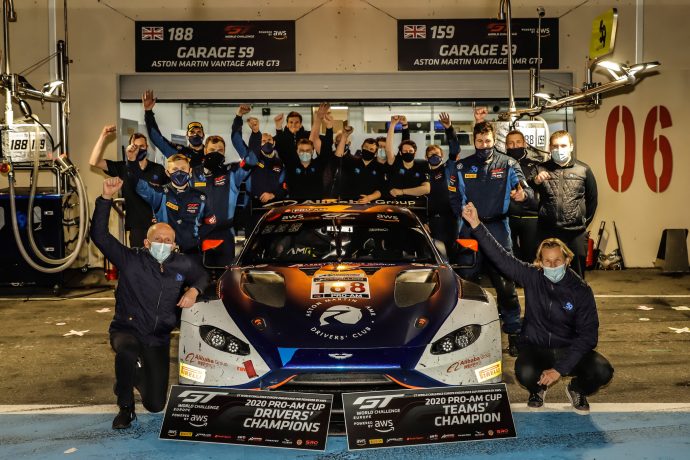 “I am super excited to be joining Garage 59 again and this time competing in the full GT World Challenge Europe Championship,” said Adam. “It was great fun racing with both Alex and Chris in 2020 and it was brilliant to see them win the Endurance Pro-Am title. This year we aim to win more races and, as a Pro-Am crew, over both championships put together a challenge for some more championship success for the team in the Aston Martin Vantage GT3.”

Kjærgaard, who was the 2018 British Formula 3 Vice-Champion, made the move into GT racing last year as a member of the Bentley Motorsport Academy. Tujula is the reigning Italian GT Champion.

Garage 59’s Silver class entry had a great start in the Endurance Cup last year scoring a podium in the first race and then winning the second race at the Nürburgring. The challenge unravelled later in the season with an accident at the 24 Hours of Spa then an unavoidable incident at the final race when a piece of debris burst the radiator of the Aston Martin. Hasse-Clot is more determined than ever to race for the title this time around.

“Since last year I have gained even more experience and confidence with the team,” said Hasse-Clot.  “I owe this in particular to our campaign in the Asian Le Mans Series.  I feel more ready than ever to finish the work started last season in GT World Challenge Endurance.  I look forward to welcoming two new teammates, both with good experience in this Championship.”

Garage 59 is currently at the Paul Ricard circuit in the south of France, for the official pre-season test with Goodwin, Hasse-Clot and Kjærgaard sharing the sole Garage 59 Aston Martin.

The GT World Challenge Europe season is scheduled to get underway at Monza in Italy on April 18th.