Capping off a very busy weekend of pre-season tests across a number of series at Fuji Speedway, it was the Autobacs Super GT Series’ turn to take to the legendary circuit at the foot of Mount Fuji for two days of official pre-season testing.

The weather forecast for the weekend called for cool, clear weather all day Saturday – then persistent rain and heavy wind during Sunday. Keeping these conditions in mind, the schedule for this week’s test was altered, and thirty minutes of track time was added for both sessions on Saturday. Thankfully, the forecast for Saturday held up its end of the bargain – partly cloudy skies, air temperatures peaking at 15°C, no threat of rain – best of all, a limited number of spectators were on hand to watch 43 cars on track.

Session 1 began at 10:00 local time, where two red flags interrupted the first hour of the 2 hour, 30 minute session. The first came when last year’s GT500 championship runner-up, Ryo Hirakawa, found the limit at Coca-Cola Corner (Turn 3) and spun off into the gravel. Fortunately, the #37 KeePer TOM’s Toyota GR Supra was not heavily damaged. In fact, Hirakawa would recover later on to finish Session 1 with the third-fastest time (10th overall for the day).

The same could not be said of the #3 CraftSports Motul Nissan GT-R of Kohei Hirate, following a collision with the GT300 class #6 Team LeMans Audi R8 LMS of rookie Yoshiaki Katayama at Panasonic Corner (Turn 16) that brought out the second red flag. Damage to the left rear suspension knocked them out of the rest of the session, and while the car was repaired in the mid-day interval, team director Toshikazu Tanaka opted not to have his car take part in Session 2 – so the #3 Nissan ended up with just 6 laps on the day. 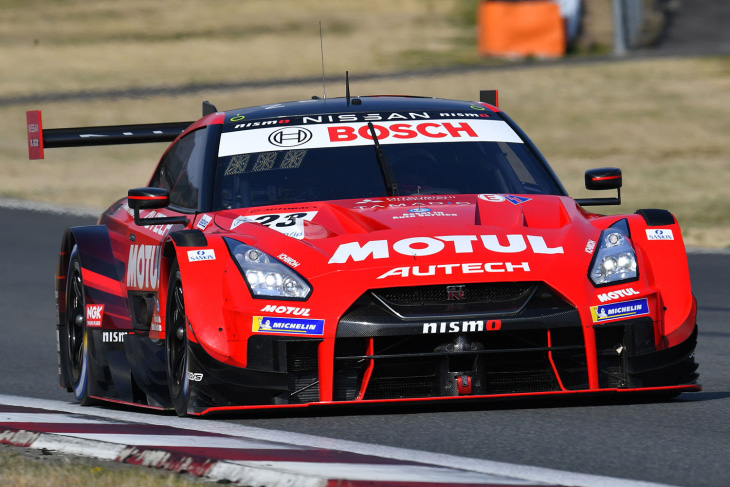 But just as the chequered flag fell on Session 1, four-time GT500 Champion Ronnie Quintarelli in the #23 Motul Autech GT-R edged his way to the top of the timesheets with a lap of 1’28.192, marking the first time a Nissan GT-R finished 1st in a pre-season test session this spring – as well as the first P1 ranking for Michelin tyres.

Tsuboi fell to 2nd, ahead of TOM’s stablemate Hirakawa in 3rd. Kazuki Hiramine was fourth-fastest in the #12 Calsonic Impul GT-R, followed by reigning champion Naoki Yamamoto in the #1 Stanley Honda NSX-GT.

After a 90-minute interval between sessions, Session 2 commenced from 14:00 local time. Track temperature had risen to as high as 30°C in Session 1, but in the afternoon, the surface temperature would drop gradually, down to 21°C by the end of this second session. 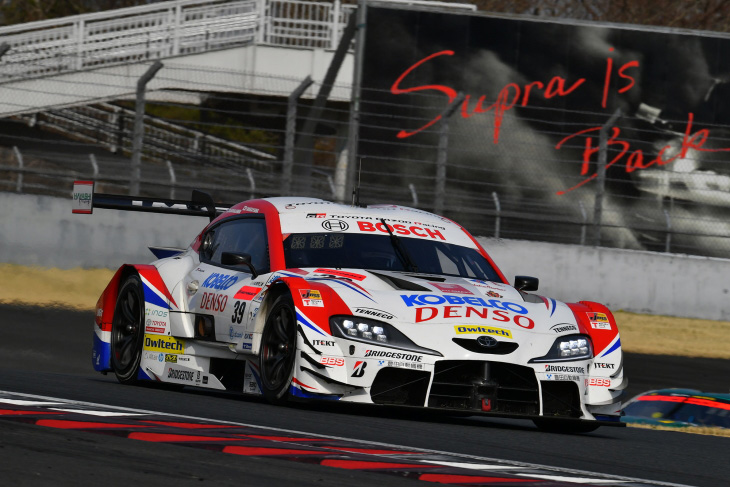 Thirty minutes into Session 2, Yuichi Nakayama set the early benchmark for the GT500 field, putting in a 1’28.293 aboard his #39 Denso Kobelco SARD GR Supra. This time stood as the fastest marker through two red flags that came in the second hour: The first, for a car going off-course at TGR Corner (Turn 1) and kicking up dirt and gravel onto the racing line; and the second, that came just at the end of the second hour when the #19 WedsSport Advan GR Supra of Ritomo Miyata stopped, ironically, at GR Supra Corner (Turn 15).

That second red flag came at the end of the mixed class portion of Session 2, which delayed the start of the two ten-minute “Exclusive Runs” for five minutes. The GT500 Exclusive Run closed out Session 2 with a flourish. 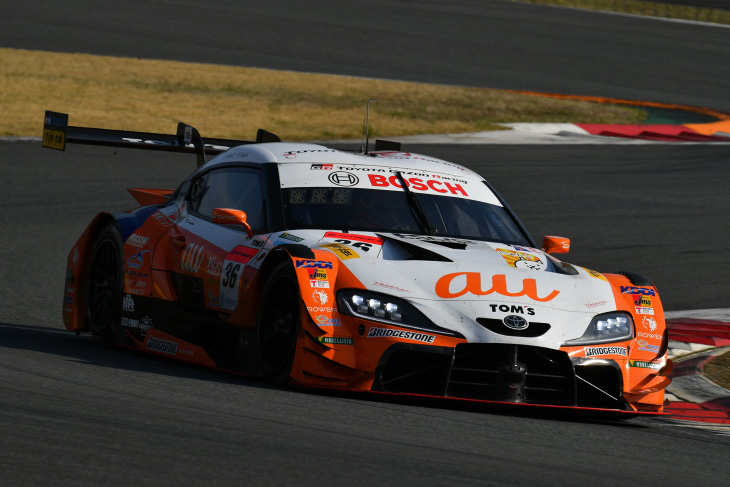 This time out, Tsuboi would make his way to the top of the timesheets in the #36 au TOM’s Supra: On his 112th lap of the day – the most of any driver in either class – he put in a lap of 1’27.760 to record the fastest time of the day overall.

Talking through his day, Tsuboi said, “We were doing tyre checks repeatedly in the morning to choose the tyre that we will use for the race. I switched with [Yuhi] Sekiguchi in the middle of Session 1 and took the wheel. We were running together with GT300 cars and I got caught up with traffic, so I was not able to get a good lap time – but the car felt good, so I could’ve got a sufficient lap time if there was no traffic.”

“Afternoon was opposite and we did long runs. Our top time came during the GT500 exclusive time when I was attacking to see how fast I can go on in the first part of the long run. I don’t think this lap time is absolute because I don’t know what kind of conditions other teams were running under. But top time feels good and it was also good that this will stay in the record of No.36 car. This will be my 3rd season after I moved up to GT500, but I have not won a race yet. So my realistic target is a first win.” 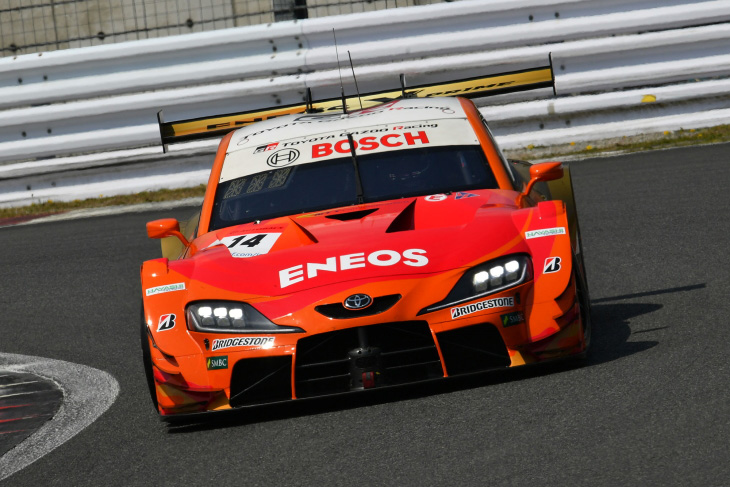 One Toyota young driver with winning experience is 2019 GT500 Champion Kenta Yamashita, driving the #14 Eneos X Prime GR Supra for TGR Team Eneos ROOKIE. He finished with the second-fastest time in GT500, less than two-tenths off the fastest time set by Tsuboi.

ROOKIE Racing’s one-year technical alliance with Cerumo has ended as of 2021, so this was an encouraging result for the team that is now trying to find its own way, and didn’t register high on the leaderboards during the first test at Okayama International Circuit.

Quintarelli’s best time from Session 1 was good enough to be the third-fastest time of the day overall. 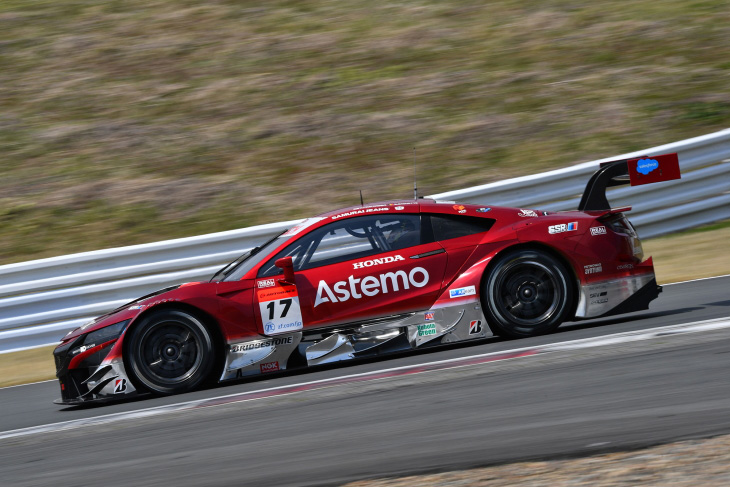 The fastest of the Hondas was the #17 Astemo NSX-GT, with Belgium’s Bertrand Baguette putting in a 1’28.287 – third-fastest in Session 2, fourth-fastest of all in Day 1, while Nakayama’s early benchmark in Session 2 was still quick enough for fifth-fastest on Day 1.

Over in GT300, the twenty-eight cars that took part were led in Session 1 by defending series champion João Paulo de Oliveira in the #56 Realize Nissan Automobile Technical College GT-R GT3 for Kondo Racing. 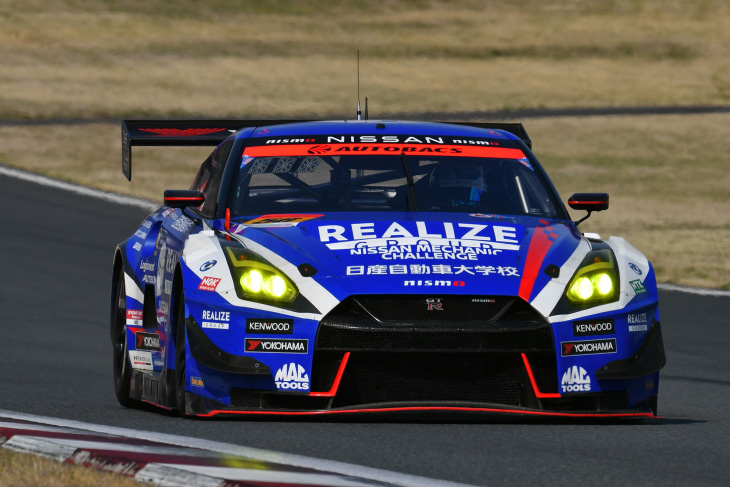 The Brazilian led the morning session with a best time of 1’36.476, which turned out to be the fastest time of the day as no car would exceed Oliveira’s time in Session 2.

“We did a lot of testing from the morning. On tires, we tested not only different compounds but also different structures,” said Oliveira. “The car felt good. This result gives me a very positive feeling, because this is the last test before the season opener.”

“But, still, I don’t know if I can be fully confident for Fuji in May. The temperature range of today must be different from that of May. But, since we were able to pick the base set, I think the team will bring in a few types based on the assumed temperature range. I can’t feel fully safe because I don’t know what kind of conditions the rivals were running under. But it feels very good to get a top time anyways. We were able to show the strength of the team as well as the speed of the drivers.” 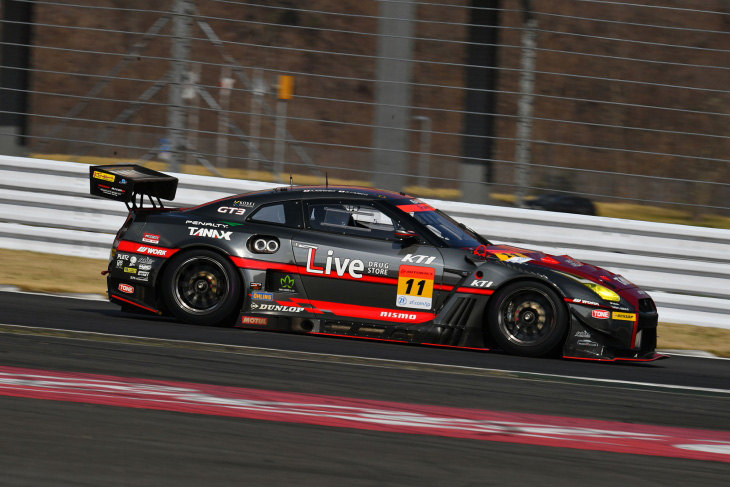 In fact, it was a Nissan 1-2-3 in Day 1, with the #11 Gainer TanaX GT-R of Katsuyuki Hiranaka finishing second-fastest… 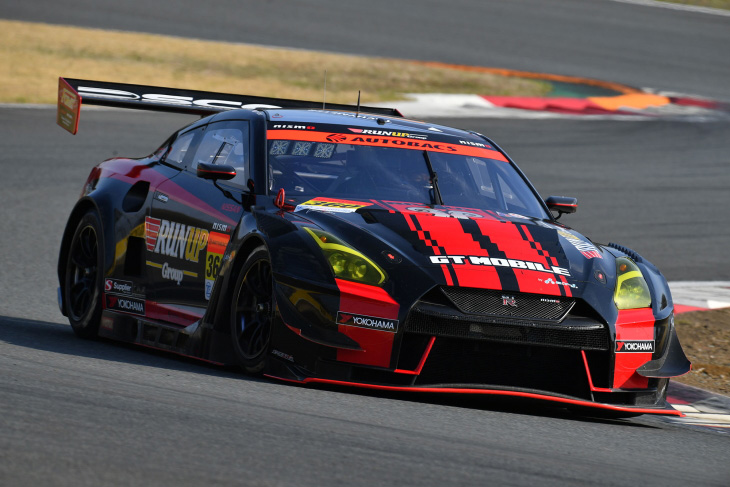 …and the #360 RunUp Rivaux GT-R of Takayuki Aoki finishing with the third-fastest time. 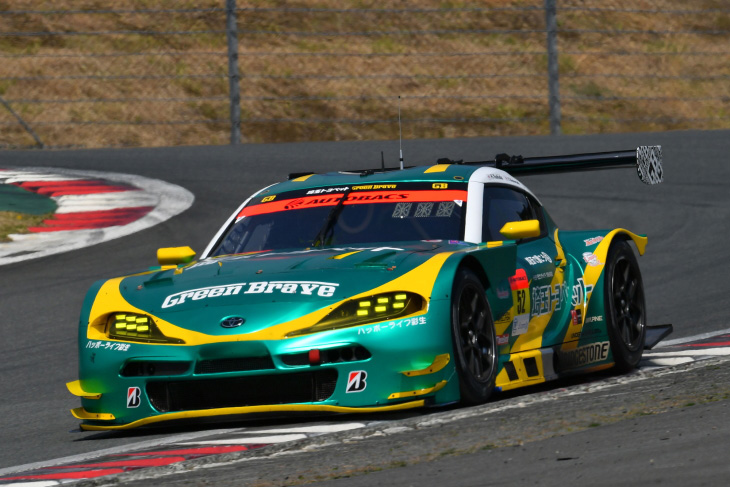 In Session 2, the top time was recorded by Max Racing’s new #244 Takanoko-no-yu GR Supra – making its first appearance of pre-season testing after missing the two-day test at Okayama. 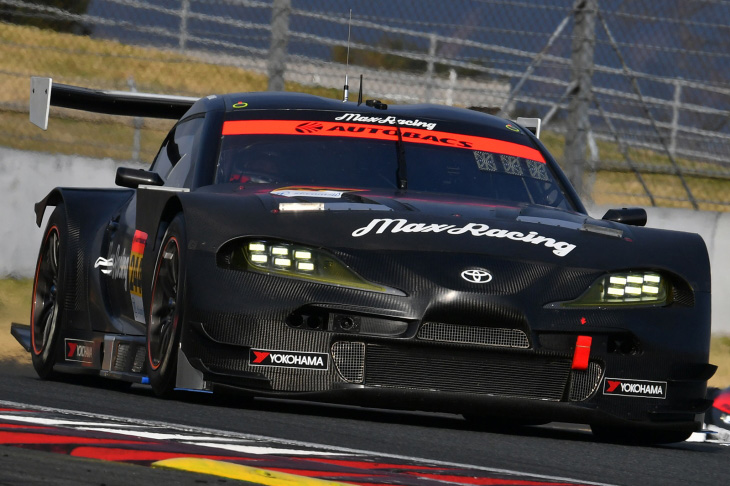 Second-year driver Yuui Tsutsumi, who made a spot start for Max Racing in the final race of 2020, recorded the best time of Session 2 with a 1’36.931 – good enough for fifth overall on the Day 1 leaderboard.

Rookie Teppei Natori was second-quickest in Session 2 aboard the #18 UPGarage Honda NSX GT3, while Takashi Kogure in the #88 JLOC Lamborghini Huracán GT3 was third in the session.

The competitiveness in the GT300 field was reflected in the fact that less than a second covered the top 18 cars on Day 1 of testing.