The last day of official pre-season testing for the 2021 Autobacs Super GT Series has concluded from Fuji Speedway. Saturday’s weather was fine, cool, and sunny as expected, while overnight rain showers greeted those who arrived in the morning for Sunday’s two test sessions.

It was anticipated that the rainfall would last throughout the day, which is why both sessions on Saturday were lengthened by 30 minutes, and why Sunday’s afternoon session was shortened by nearly an hour. Instead, the rain completely stopped before Test Session 3 began at 9:30 local time.

Just ten minutes into the 2 hour, 15 minute Session 3, a red flag was brought out when the #12 Calsonic Impul Nissan GT-R came to a stop at Dunlop Corner (Turn 10) – however, the car resumed under its own power and continued to run near the front of the leaderboards.

A dry line gradually formed around Fuji Speedway, and lap times began to tumble down into the sub-90 second range for GT500 cars. The leaderboard order shuffled frequently during this time, but with fifteen minutes left in the session, it looked as if Tsugio Matsuda in the #23 Motul Autech Nissan GT-R would keep the top spot with a time of 1’29.033. 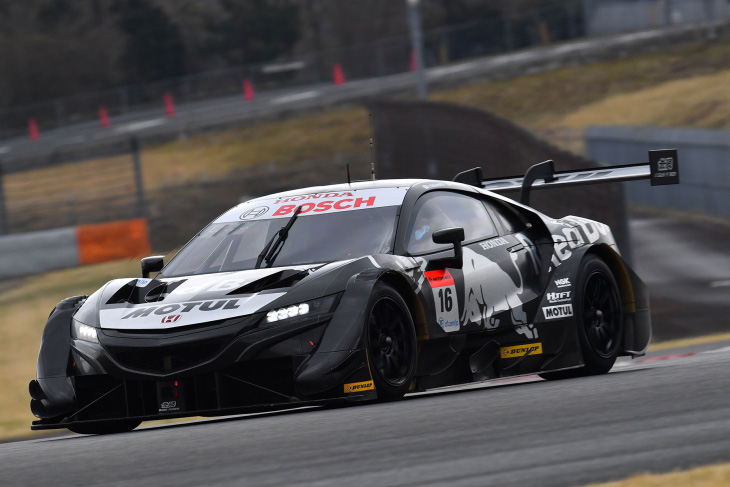 Just as the chequered flag waved for Session 3, the #16 Red Bull Motul Mugen NSX-GT of Toshiki Oyu jumped to the top of the board with a best time of 1’28.834, edging ahead of Matsuda by two-tenths of a second.

Koudai Tsukakoshi in the #17 Astemo NSX-GT was 3rd, Ritomo Miyata in the #19 WedsSport Advan Toyota GR Supra was 4th, and Kazuya Oshima in the #14 Eneos X Prime GR Supra was 5th.

One car whose day ended prematurely was the #37 KeePer TOM’s GR Supra of Ryo Hirakawa and super-sub Sena Sakaguchi. After coming to a stop at Panasonic Corner (Turn 16) at the end of Session 3, the #37 KeePer Supra was brought back to the garage for repairs, and it was determined that the car could not be fixed in time to run during Session 4, starting from 14:00 local time.

This one-hour session saw a brief rain shower at the south end of the circuit, and then another red flag when the GT300-class #360 RunUp Rivaux Nissan GT-R GT3 of Takayuki Aoki went off course at the 100R Corner (Turns 4 & 5), but Aoki avoided contact with the sponge barriers and continued on with his run, as the GT500 cars continued with their runs, and the track dried out yet again. 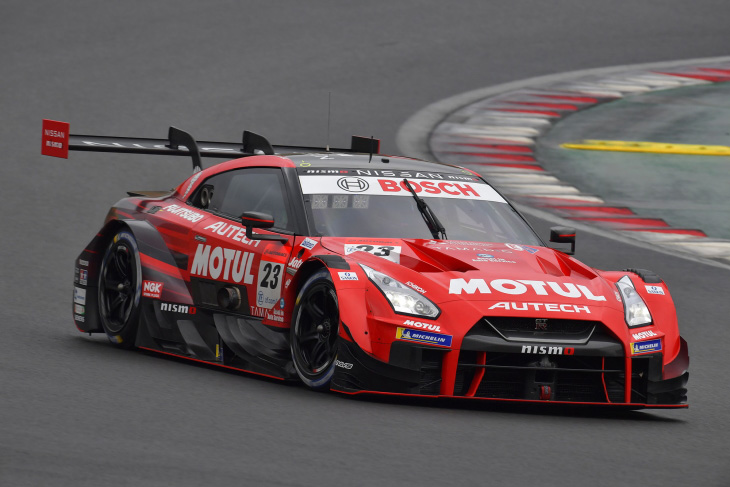 Ronnie Quintarelli took over from Matsuda in the #23 Motul GT-R, and in the middle of Session 4, the four-time GT500 Champion posted the fastest time of the day with a 1’28.397. That will be very encouraging for a number of Nissan supporters, who have seen the manufacturer struggle to keep pace with Toyota and Honda in recent years.

“Tsugio drove in the morning, and we carried out tyre testing while the condition changed from wet to dry. I drove in the afternoon and after doing a short run once, I spent most of the time doing long-run testing,” said Quintarelli. “We were able to find a tyre with good durability for the second round held here at Fuji. We also tried new things and that was OK too. Michelin tyres are for sure improving if you compare with last year.”

“As far as the car goes, it’s basically the same as last year, but we worked on the setup and also the engine had some modification. Although the changes are minor, it definitely got better. But, you know, drivers would say ‘Need more power!’ regardless of how much the power has increased. We had sufficient feedback from the test for the season opener Okayama and, especially, for Round 2 at Fuji.”

After leading Session 3, Oyu finished 2nd in Session 4 and 2nd overall on Sunday, his best lap of 1’28.709 just three-tenths shy of Quintarelli’s time. 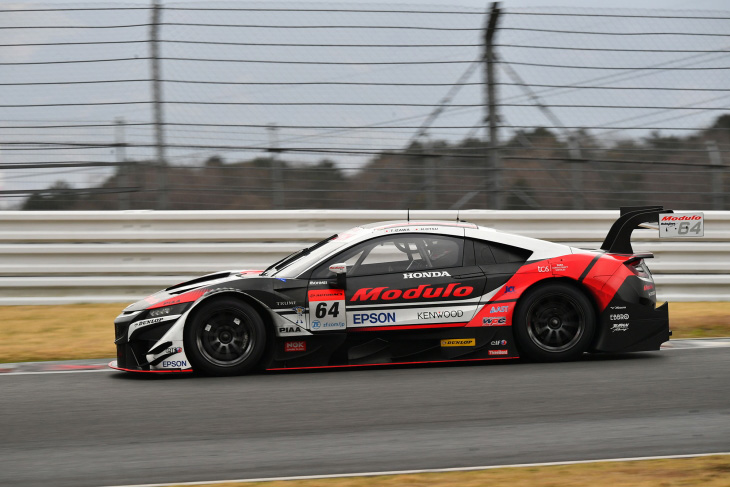 The other Dunlop-clad Honda, the #64 Modulo NSX-GT, set the third-quickest time at the hands of GT500 sophomore Hiroki Otsu. 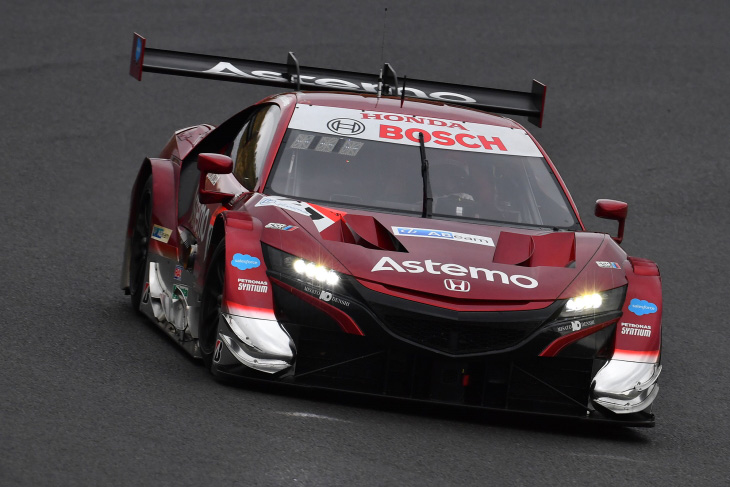 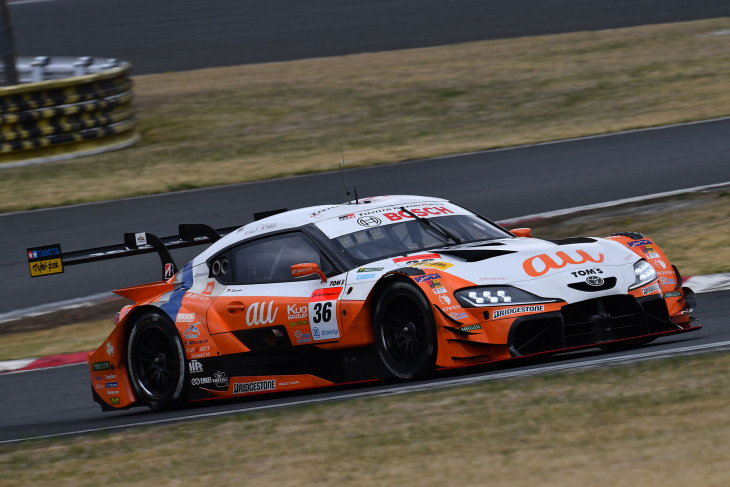 And the top Toyota was the #36 au TOM’s GR Supra of Saturday pace-setter Sho Tsuboi, who was fifth-fastest on Sunday.

In GT300, the #56 Realize Nissan Automobile College GT-R of João Paulo de Oliveira was the fastest of the 28 cars for the second consecutive day of testing. 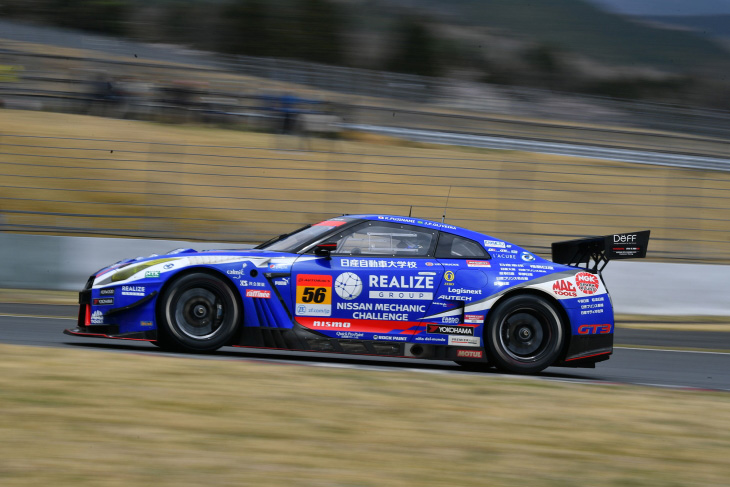 Right at the end of session 4, Oliveira jumped to the top of the leaderboard with a time of 1’37.128, seven-tenths slower than what he ran on Saturday – attributed to the damp conditions and lack of rubber on track.

“The car felt good again today. Especially when we did long runs simulating the race,” said Oliveira. “Getting the top time on both days, I think we could take away a lot from this weekend. It gave me confidence on the car setup and the lifetime of tyres. I can’t share details, but we know how to prepare for Round 2 at Fuji, with Success Weight.”

“But there are more GR Supra GTs this year and they will be a huge threat. Yes, I did get the top time today, but I don’t trust rivals’ lap time from today is real. I bet they were never full throttle,” Oliveira laughed. “They (GR Supra) were about 1.5 second faster in race lap simulation at Okayama test. But this test gave us confidence on our car, so I will push 100% at the season opener!” 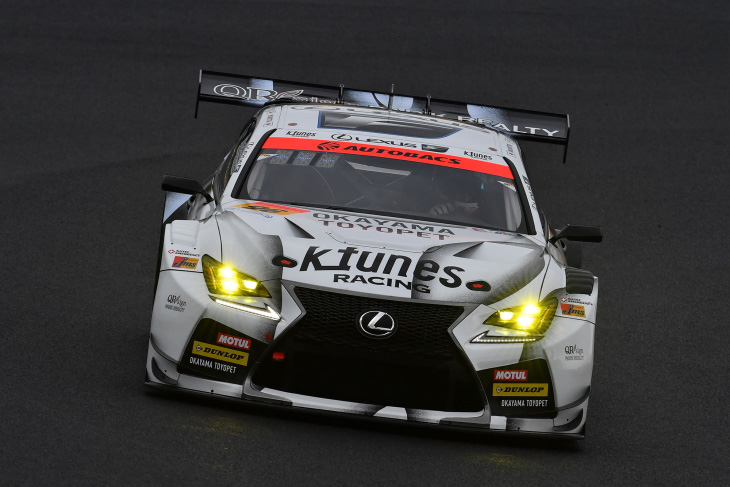 Just seven-thousandths of a second behind Oliveira was FIA F4 Japanese Champion, Hibiki Taira, in the Dunlop-clad #96 K-Tunes Lexus RC F GT3. Taira has been standing in for Sena Sakaguchi, who has been standing in at TGR Team KeePer TOM’s for Sacha Fenestraz due to visa issues. 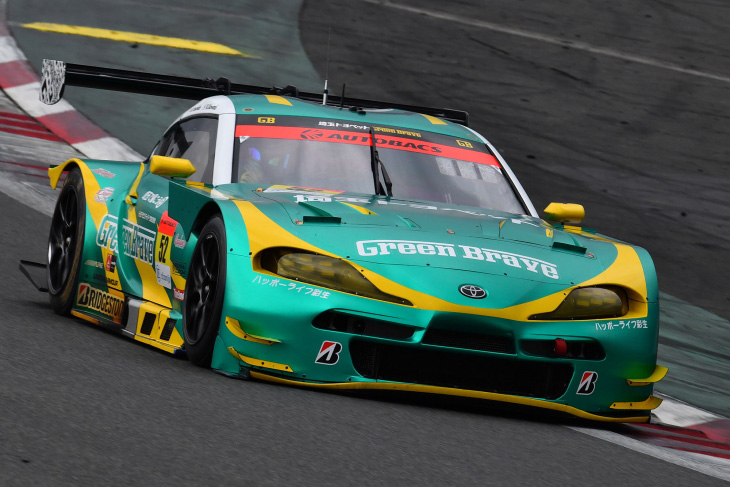 And after setting the fastest time of Session 3, the #52 Saitama Toyopet GreenBrave Toyota GR Supra GT of Kohta Kawaai was just 0.038 seconds off the top time set by Oliveira in 3rd place – fastest of the GT300 regulation cars.