The 2021 Michelin Le Mans Cup will see yet another nation represented on the entry with the Icelandic owned Team Thor making their international racing debut with Team Owner Audunn Gudmundsson driving alongside his 2020 Radical Team Challenge co-driver, Briton Tom Ashton.

The pair will campaign the #77 Ligier JS P320 in what is believed to be the first-ever pan-Europe effort by an Icelandic team, the squad composed of a mix of Icelandic and Finnish personnel, the latter from the well-established Koiranen GP  49-year-old Gudmundsson hails from Garðbær, just south of the capital Reykjavik, and when the DSC Editor caught up with him earlier this week the anticipation of the season to come was readily audible!

“I came back into motorsport really only quite recently having had some success with business, I was always fascinated by motorsport though and as a young boy was always out racing anything I could get hold of, snowmobiles, bikes, quads, anything!  “After a while, I tried out karting but it is tough in Iceland with no circuits, so it was just racing in a circuit marked out on a car park.

“More recently I bought a Radical SR3 with a friend and in 2019 I entered 3 races in the Radical Challenge Championship at Snetterton, Spa and Silverstone and loved it.

“In 2020, we did the whole 2020 season of the Radical SR3 Teams Championship with Tom Ashton, taking the title. Tom will race with me this year in the Michelin Le Mans Cup.

“While we were racing at Spa last year there were LMP3 cars on track and I watched them and thought they were the most fantastic things. I knew I would love to drive one and owning one became a real dream.

“It was sometime later when that was discussed and became a reality, now we have the car, and I absolutely love it. “We have done one shakedown test at Magny Cours with the car so we cannot wait to get on track in Barcelona.”

Tell us a little about the Team Thor name? 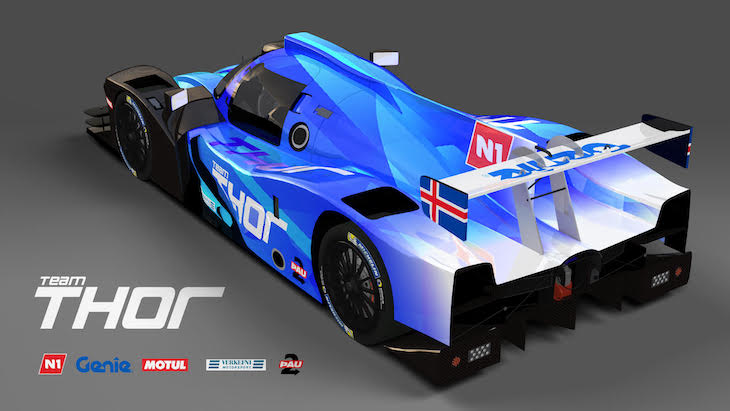 “I wanted to make sure that people could see we were proud of our Nordic heritage but we are also humble, this is a big step, in particular for me so whilst the Thor name is important, we will not have the hammer on the car, I want to race but am fully aware that I will not be at the front, but if the chance comes to be there we will take it!