Garth Tander and Yasser Shahin have taken a thrilling victory in the second race of the SRO GT World Challenge Australia Round 2 at Bathurst, with a last-lap pass on Prince Jefri Ibrahim in the #888 Triple 8 Race Engineering Mercedes AMG at Forrest Elbow clinching victory for Shahin and the #777 The Bend Motorsport Park Audi R8 team.

“I knew I had the pace, but it was so hard to find the spot to do it safely,” said Yasser Shahin about the move. “His [Prince Jefri] mistake at the Dipper gave me the chance that I needed”

“Thrilled – The stuff dreams are made of! Credit to Garth [Tander], he gave it to me with only a few seconds behind the guys and then the Safety Car came. It was good. It’s nice when it comes together.”

The race was set up for a grandstand finish, with a Safety Car called just as the pit window had closed due to a moment for Arthur Abrahams, hitting the wall under The Tree, which tore the left rear wheel from the #91 Canon Foods Audi R8. Shahin, 4th in the train, managed to pass the #4 Grove Racing Porsche at the wave of the green flag, before chasing down the battle for the lead.

The #24 Bostik Audi R8 of Tony Bates and Chaz Mostert rounded out the podium, with The #4 Grove Racing Porsche 911 of Stephen and Brenton Grove, and Brad Schumacher’s #55 Kelso Electrical Audi R8 LMS Ultra rounding out the top 5. 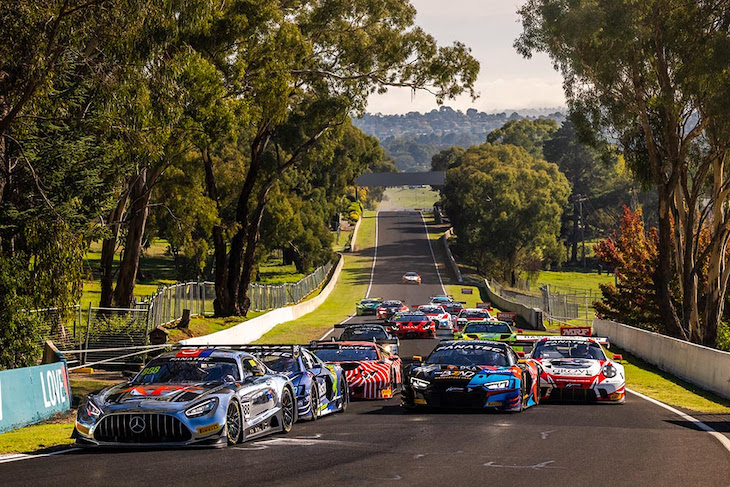 The early morning start saw warmer than expected temperatures, which seemed to favour The #888 Triple 8 Race Engineering Mercedes AMG, started by Shane van Gisbergen, and the #24 Bostik Audi of Chaz Mostert. They pulled out to an 8-second gap from Garth Tander in the #777 The Bend Motorsport Park Audi R8, before the pit window saw Mostert and Tander dive into the pits a lap ahead of van Gisbergen.

While the Safety Car for Abraham’s moment under the tree enabled Prince Jefri the opportunity to resume the race in the lead, the compression of the field meant that it would be a 10-minute sprint to the line.

There was a complicating factor; a lap down Mark Cini in the #9 Hallmark Audi R8 had managed to separate the #888 Mercedes AMG from the rest of the Pro-Am field. As the race went to green, Bates in the #24 Bostik Audi managed to pass the lapped runner up Mountain Straight, but Shahin, who had already passed Stephen Grove in the #4 Grove Racing Porsche, was stuck behind Cini’s #9 Audi for the run over the mountain, losing almost 4 seconds in a single lap.

Shahin then set about closing the gap to the battling duo out front, latching onto the rear of Bates’ Audi with only 5 minutes left. The sudden pressure from behind allowed Ibrahim the chance to stretch a 2-second advantage before Shahin made the move into second, wrapping around Bates on the entry to Griffiths Bend.

The 2-second buffer was almost enough, but a pair of cracking laps from Shahin set up a last lap thriller. A small oversteer moment exiting the dipper for Ibrahim left the door open at The Elbow, and Shahin squeezed his Audi through, escaping down Conrod straight to take victory by only half a second.

The victory is the third for the Tander/Shahin #777 The Bend Motorsport Park pair and cements their championship lead after round two of the SRO GT World Challenge Australia Championship.

Brad Schumacher won the Trophy class race, coming home in 5th in the #55 Kelso Engineering Audi R8 LMS Ultra after a great restart saw him make 3 positions. The first stint was controlled by Paul Stokell in the #124 KFC Audi R8, but the Safety Car fell at the wrong point for the team, with Greg Hiddon falling down the order to finish 5th in class.

Second in trophy class was Max Twigg in the #23 KFC Audi R8 LMS, with third going to Nick Kelly in the #99 Industrie Audi R8 LMS Ultra. Unfortunately, the strong showing from Brett Hobson in the #96 Hobson Motorsports Nissan GTR wasn’t replicated in race two, with the Nissan GTR unable to make the grid.

Am honours went the way of the #7 Local Legends Aston Martin Vantage of Tony Quinn, after a great early-race tussle with Ben Porter in the #51 Imak Kwikmit Lamborghini Huracan. Porter and teammate Andrew MacPherson finished second in class, with Mark Cini’s #9 Hallmark Audi a lap down. Mark Griffith again closed out GT4 victory in his #19 Daimler Trucks Brisbane Mercedes GT4.