Despite the challenges still imposed by the COVID-19 situation, with international travel restrictions and the associated protocols, the Masters Historic race Weekend at Donington Park saw an impressive and varied 16 car entry for the double-header of Masters Endurance Legends races with a race apiece on Good Friday and Easter Saturday in bright but rather breezy conditions.

Jack Dex staved off challenges from Steve Tandy’s Lola B12/60 and teammate Max Lynn in a similar BR Engineering BR01 to in the end take a convincing win in the first Masters Endurance Legends race at Donington Park.

Having started from pole, Dex first kept a fast-starting Tandy at bay until the Lola spun off at Redgate, and then soaked up mid-race pressure from Max Lynn to increase his lead to a dominant 21 seconds at the chequered flag. In fact, towards the end, it was Lynn who was forced to pull out all the stops in order to defend from his father Shaun in yet another BR01 P2 prototype.

Following home the BR01 1-2-3, Mike Newton in his MG-Lola EX257 claimed fourth ahead of Richard Cook in the Riley & Scott Mk3C and Richard Meins in the last of the BR01s. In GT’s, Olly Bryant was in a class of his own in the Ford Mustang GT-S1.

In the opening stages, Tandy was the man on the move, demoting Max Lynn to second in his chase of Jack Dex in the lead. Setting the fastest lap of the race on lap 4, and further improving on that on lap 5, Tandy was soon harrying the BR01 in front of him while the two similar Russian cars of son Max and father Shaun Lynn grew ever smaller.

Mike Newton in fifth was in no man’s land, seven seconds down on the leader, but 11 seconds up on Richard Cook in the Riley & Scott Mk3C, who in turn was leading Richard Meins in the last of the four BR01s. However, from lap 7 on, Tandy had to do all over again as contact from Dex as the Lola went for a perfectly legitimate move cup the inside saw the Lola half spin going into Redgate, dropping down to fifth behind Newton. 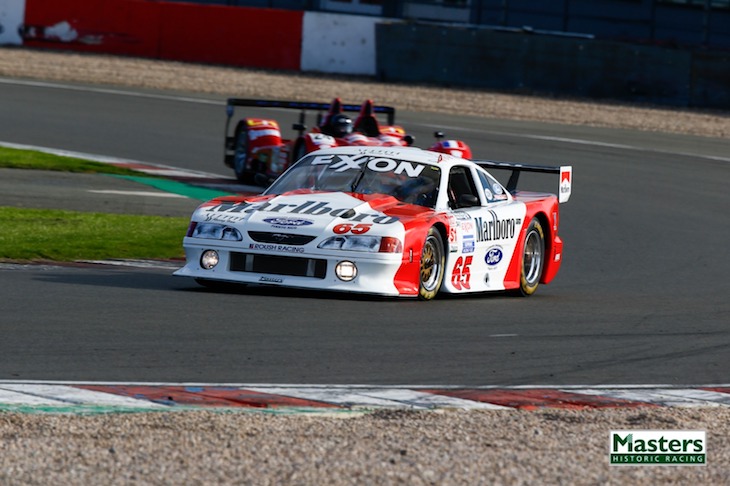 In the GT class, Olly Bryant was way ahead of everyone else, first leading Mike Furness in the Courage LC75 before the next car GT car appeared, the Porsche 997 Grand-Am of Tom Jackson that in itself had some ten seconds in hand over Marcus Jewell in the 996 RSR. Next up was Colin Sowter in the Ferrari 458 GT3. 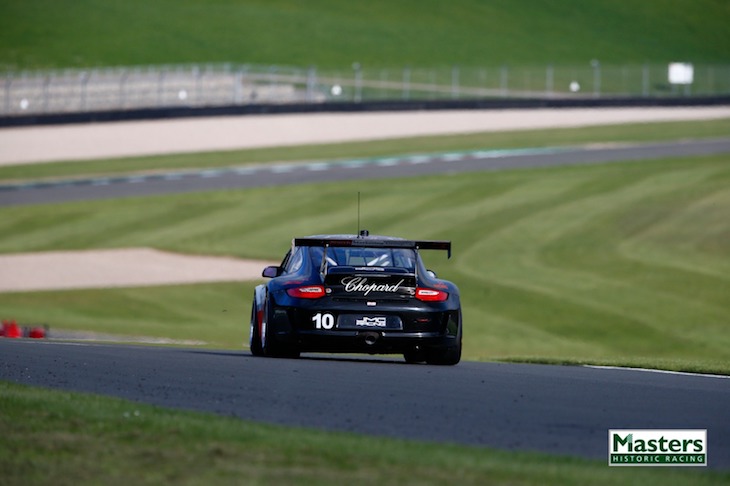 Now with three BR01s occupying the top-three, Max Lynn was closing on Dex while leaving his father trailing by five seconds. On lap 11, Tandy was back up into fourth but the gap to Shaun Lynn was still nine seconds, with Lynn setting almost identical lap times. Meanwhile, at the back, Max Girardo was back in, the Dallara SP1’s engine issue from qualifying again playing up in the race.

The pit window now open, Dex had soaked up the pressure from Max Lynn to increase his lead to three seconds, with Lynn Sr now a further 15 seconds adrift. Tandy was nibbling away at the third BR01’s lead that was now cut to six seconds, while increasing his lead over Newton, Bryant and Furness.

On lap 21, suddenly all the leaders were in the pits for their mandatory stops, with Tandy coming in a second time! His spin had caused a bad vibration in his Lola B12/60, enough reason to wisely decide on retiring the car. 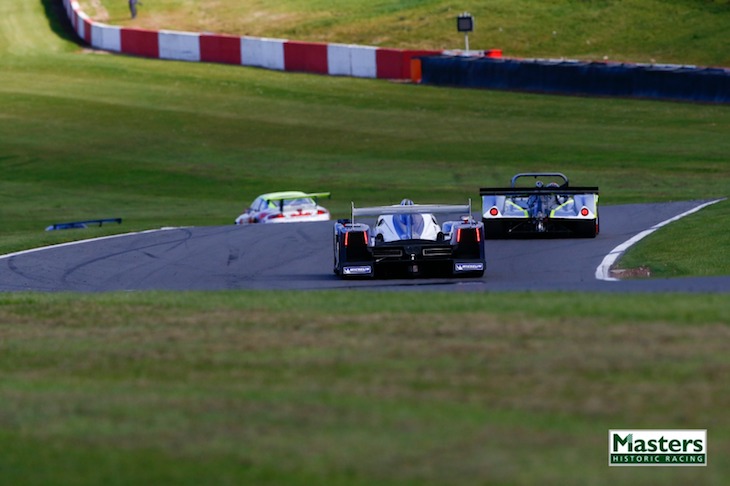 After the stops, Dex quickly increased his lead to 14 seconds over Lynn Jr and 20 seconds over Lynn Sr, with Newton now in a safe fourth. Cook was keeping some 13 seconds ahead of Meins in sixth, while Bryant continued to dominate in GT. Behind Furness in eighth, Jewell had got ahead of John Cockerton in the Grand-Am Porsche started by Tom Jackson, the pair chased by Sowter, the Michael McInerney/Aaron Scott Mosler MT900R and Andrew Lawley’s Porsche 911 GT3 RS, who at the end saw Simon Watts in the Lola B2K/40 come past. 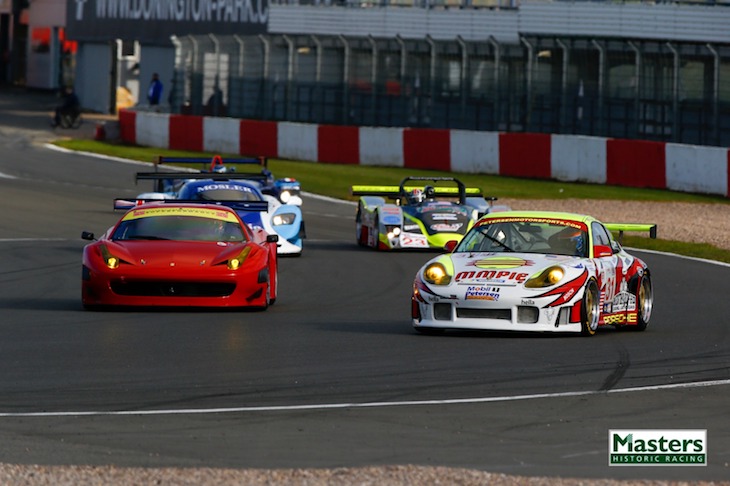 As the time ticked away, Dex looked safe for the win, but Shaun Lynn was putting son Max under increasing pressure. As the 35th and final lap was completed, Max held on to take second ahead of his father. Newton, Cook, Meins, Bryant, Furness and Jewell were next up, while on the final laps Aaron Scott pipped Sowter and Cockerton for tenth overall and second of the GT cars. 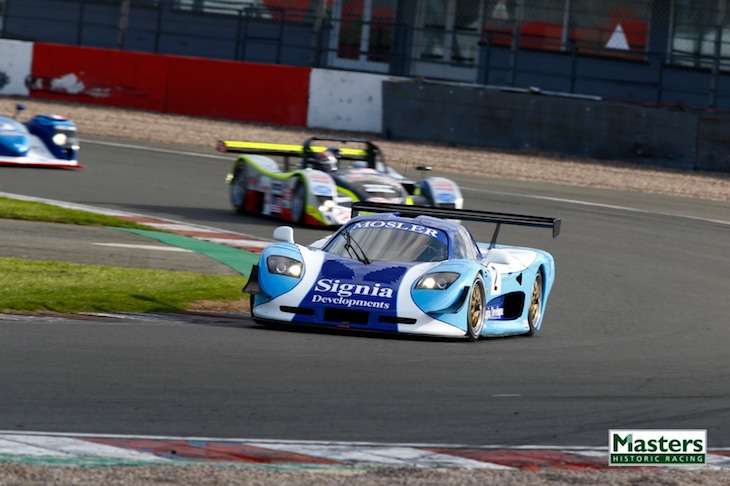 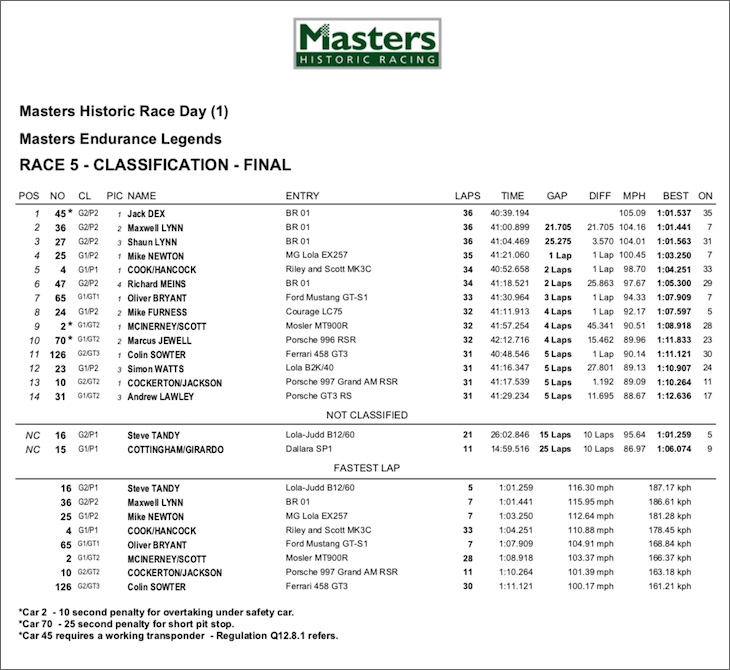