Michael Christensen, Kévin Estre and Lars Kern drove the Manthey Racing “Grello” Porsche 911 GT3 R to victory in the NIMEX 45th DMV 4h race, the opening round of the 2021 NLS after NLS1 was cancelled last month due to snow. 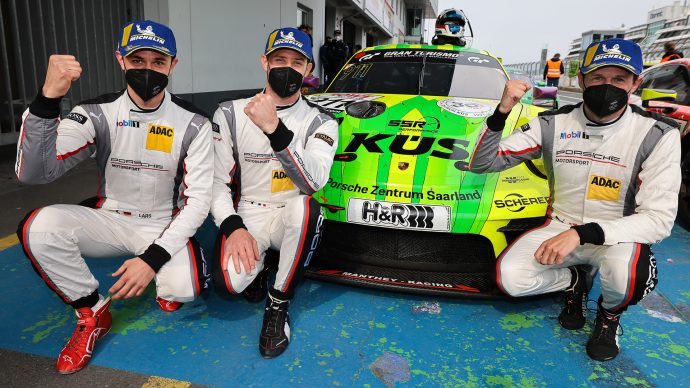 It was the 54th NLS victory in the 25-year history of the Manthey team and their first since April 2019, but the team had to push hard to take the win after a stop-go penalty for a pit-stop infringement.  That push saw Kevin Estre set a new lap record on the 24.358-kilometre combination of a short Grand Prix circuit and the Nordschleife with a time of 7:56.087, beating Klaus Bachler’s previous record from 2018 by 0.172 seconds.

The second and third-placed cars had a grandstand finish too, finishing just 0.964 seconds apart at the end. Frédéric Makowiecki and Dennis Olsen took second place in the Frikadelli Racing Porsche 911 GT3, ahead of Michele Beretta and birthday boy Nicki Thiim in the Audi R8 LMS from Phoenix-Racing.

“I’m just super happy. Another victory for Manthey-Racing after a long time – that’s fantastic,” said Lars Kern. “And what Kevin conjured up in the initial phase, words fail me!”

Kevin Estre: “Our main goal at the moment is simply to prepare for the 24h race, and that was perfect preparation. We had an extremely good car today, everything was just right. ”The good pace of ‘Grello’ also shows the fact that the trio was able to compensate for a stop & go penalty that the team negotiated for falling short of the minimum idle time.

“This way you can get over the mistake,” grinned Christensen. “A great win for Manthey, a one-two for Porsche, we are on the right track.”

Frikadelli Racing initially secured pole position for the race in qualifying. With a time of 7: 53.565 minutes, Olsen relegated the competition from Phoenix-Racing (# 11) to second place by 2.264 seconds. “That was a good lap,” said the Norwegian. “We worked out a very good setup during the test and set-up run on Friday. On the lap itself, I had no traffic and was able to drive freely. ”

Referring to the recent passing of Frikadelli Racing and ‘Ring race icon Sabine Schmitz he added:

“I am very happy for the team. I think Sabine watched us from above and she is proud of us. ”

The Frikadelli duo struggled during the race. “We had a few problems and couldn’t quite keep up with Manthey’s speed,” said Makowiecki. “We still have some work ahead of us.”

Nicki Thiim gave himself the best present on his 32nd birthday: “A great day to celebrate my birthday. Third place is a great result. I haven’t been on the Nordschleife since 2018 and immediately had a lot of fun again. I pushed extremely hard over the last few laps. The last two laps were absolutely full throttle. I had to give everything to keep Stippi behind me.”

The fastest GT3 Pro-Am car was driven by Philipp Neuffer, Stefan Aust and Nico Menzel for Huber Motorsport. Victory in the Am classification went to Janine Shoffner and Moritz Kranz, who contested his first GT3 race in the Mercedes-AMG GT3 from GetSpeed ​​Performance.

Victory in the Cup3 class (Cayman GT4 Trophy by Manthey Racing) with 18 vehicles went to Daniel Blickle, Tim Scheerbarth and Max Kronberg for the W&S Motorsport team. The lead over Thorsten Jung and Oskar Sandberg in the Cayman from H&R Spezialfedern was only 5.430 seconds at the finish. ‘Dieter Schmidtmann’, Heiko Hammel and Tim Heinemann celebrated their first victory with a KTM X-Box GTX in the CupX. In the TCR class, the first victory of the year went to ‘Peter Hansen’ and ‘Lars Nielsen’ from Denmark with an Audi RS3 LMS.

The reigning NLS champions – Christopher Rink, Danny Brink and Philipp Leisen in the BMW 325i from Adrenalin Motorsport Team Alzner Automotive – have picked up where they left off last year: with a triumph in the V4 class (VLN production cars up to 2,500 ccm Cubic capacity) the trio got off to a successful start in the 2021 season. The same applies to junior champion Marcel Marchewicz.