The two-day test to kick off the 2021 FIA World Endurance Championship has left fans and seasoned observers frustrated, though in many cases unsurprised.

The bald fact is that one of two scenarios has been played out – A – The Hypercars are not quick enough, even against the now further hobbled LMP2s, or B – Both Toyota and Alpine have worked together to ensure that their real pace was not seen in the test.

The LMP2s are certainly slower than last season, the fastest lap seen at Spa, in significantly warmer conditions in 2020, was in the high 2:01s in qualifying, with fast race pace in the 2:05-2:07 band.

Since then the cars have seen their power dropped by some 70 hp, have been dealt a 20 kilo weight penalty and have been mandated in the WEC to run with the low drag, low downforce aero package previously reserved for the Le Mans 24 Hours.

The lap times were delivered in different ways between the Hyercars and the LMP2s, the trio of top class cars typically much faster in the first and third sectors but 1-2 seconds slower in the twisty sector 2.

Drivers of cars following the Toyota Hypercars reported that the cars were showing signs that their weight was giving issues, the Toyota’s rolling more than might have been expected, but the reality was that the Alpine, an ex LMP1 car now with reduced power and increased weight, was underperforming in sector 2 as well. 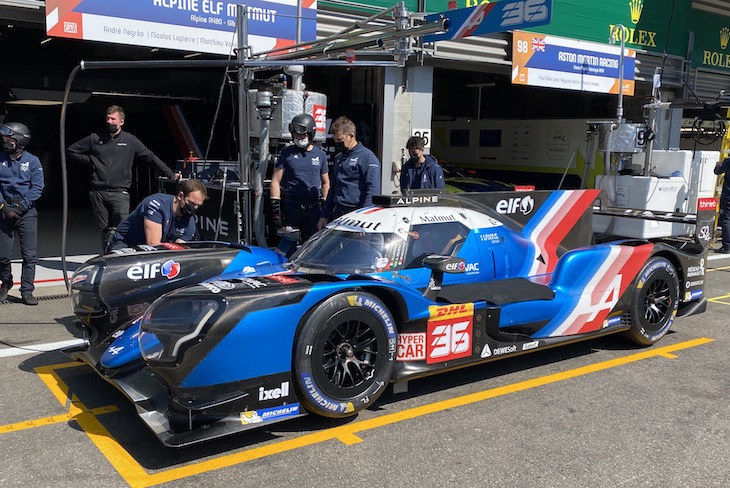 One seasoned observer offered the snippet that the A480 might be struggling with the larger LMP1 tyres that the Rebellion Racing team always struggled to get ‘switched on’ and that the extra weight and lower power would not help matters.

That’s as maybe, but a car with less weight than an LMP2, and with c.70 hp more, plus a more advanced (albeit low-downforce) aero package should surely have been closer to the ‘window’.

A team statement from Toyota explained that the expectation was that the GR010s would get quicker through the week, how much quicker was not revealed, which leaves the question, was the Prologue performance real ultimate pace, or does the soon to become very familiar BoP game start here*?

The raw data should be clearly visible to the team responsible for BoP and either way there seems no reason whatsoever for a further knee jerk change to LMP2 performance at this point. Teams should not be punished for showing their speed, and the LMP2 teams were doing what they could to dial their cars in to a package that none have had the opportunity to sample here before, the increased weight, reduced power and mandating of the low downforce aero kit coming just over three weeks ago!

And they certainly did!

This has proved to be a very expensive and exhausting couple of days for a number of teams – happily without significant injury to the several drivers involved in multiple significant incidents.

DSC believes that the #46 Project 1 Porsche will be withdrawn from next weekend’s race after suffering chassis damage in the Monday afternoon accident for Norwegian WEC debutant Anders Buchardt, the team apparently have no source to draw upon for a spare car in time. 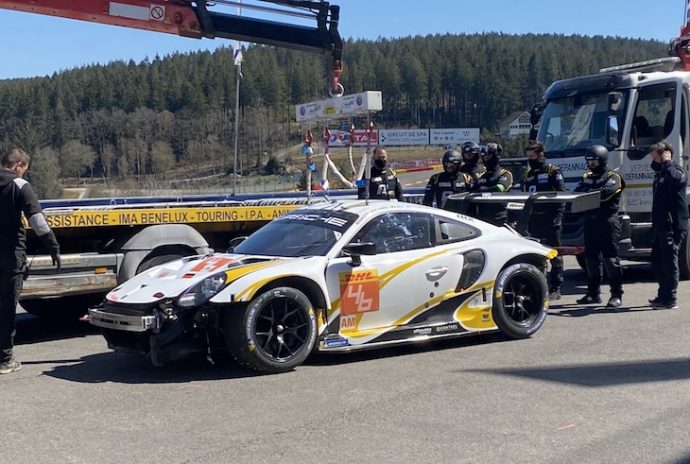 TF Sport had a simply terrible Monday, and a significantly better Tuesday, both of their customer Aston Martins in the barrier at Raidillon within minutes of each other yesterday and To Ferrier’s team swinging into recovery mode immediately. 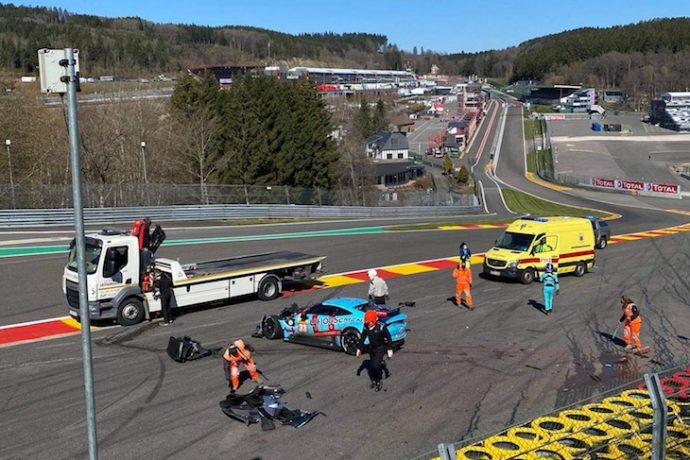 The worst damaged of the pair, Ben Keating’s #33 car was replaced on track today by the team’s ELMS GTE car, a mercy dash from the UK less than straightforward in these post-Brexit and Covid affected times, the car arrived at Spa at 5 am and was on track soon after the session began this morning after a full bodywork change and swap of ELMS electronics for the WEC standard fit, including the required data loggers etc. The car was in the mix on Tuesday morning and topped the times in the final session.

The #777 D’Station Vantage required a substantial front-end rebuild after it’s off’ at Raidillon, which was complete in time for the car to take to the track at the end of the first hour of the morning session too, a great recovery from TF. 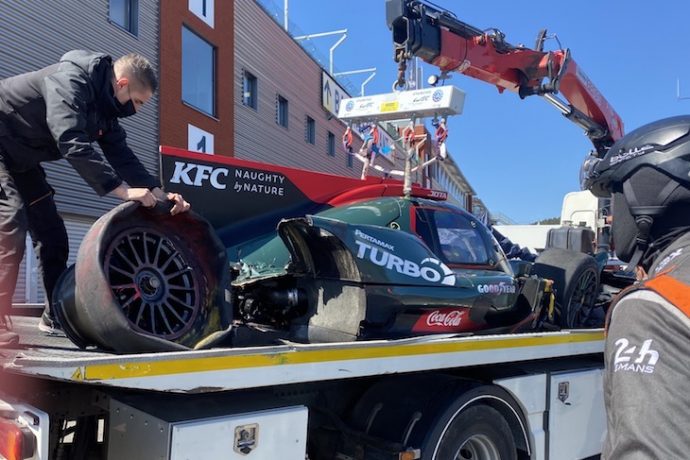 Jota Sport too had a car that was substantially damaged on Monday, the #28 heavily into the barriers on the outside of Raidillon and the car requiring a rebuild around the Kentish team’s spare chassis.

That job was completed to allow the car to get back on track in the latter part of the Tuesday morning session.

And then there were a trio of cars damaged on Tuesday!

The #29 Racing Team Nederland Oreca (Job van Uitert) and the #85 Iron Lynx Ferrari (Katherine Legge) had a simply enormous accident at Blanchimont, both cars impacting the barriers on the outside of the corner after contact as both tried to turn in as the Oreca undertook the 488 on the outside of the racing surface. 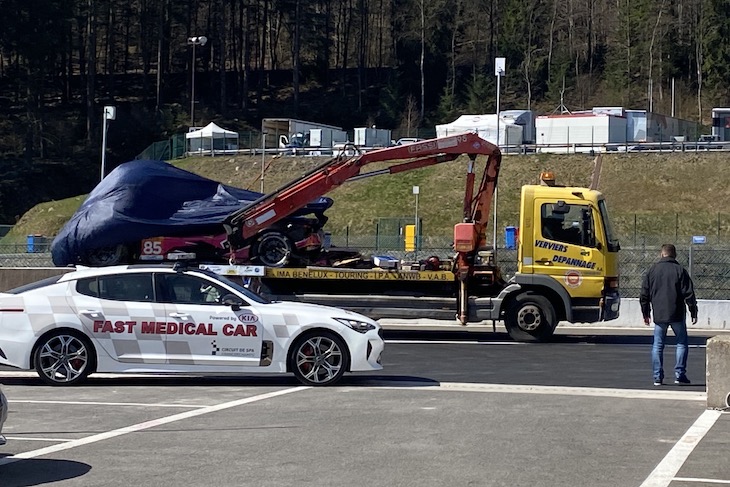 The Oreca is currently being rebuilt around a spare tub whilst Iron Lynx are understood to have despatched one of their ELMS GTE cars to Spa, both cars very heavily damaged, again both drivers mercifully unhurt.

The final casualty came late in the final session, the #47 Cetilar Racing Ferrari pitched into a half spin, again at Raidillon, after contact with the #7 Toyota, the damage, principally to the rear of the Ferrari, is under repair, the car set to be fine to race at the weekend, the Toyota meanwhile required repairs to the left side bodywork but was back in action before the end of the session.

In total then, subject to confirmation, one car out of the race and a further four requiring replacement cars/ chassis between Prologue and race weekend. A very big bill in these straitened times!