DSC caught up with High Class Racing driver Jan Magnussen as he made final preparations for the two-day Prologue test at Spa Francorchamps, ahead of next weekend’s FIA WEC season opener in Belgium.

The test comes hot on the heels of the announcement that High Class will shuffle their pack to accommodate a long-hoped-for opportunity for Jan and his son Kevin to drive together.

And it was clear that the announcement has made dad very, very happy!

How long have you waited to make the announcement that you’ll finally race with Kevin?

“I’ve been waiting many, many years to be able to make that announcement. But it all happened super fast. When we learned that High Class had another entry for Le Mans we started working immediately but we only had about a month to do everything. Pretty much everything came together in the last week.”

And this is the first time at the professional level you’ve ever raced alongside Kevin? correct.

“Absolutely, it’s amazing and It’ll be fantastic. You know, we’ve been working for this for so long and tried so hard for many, many years. 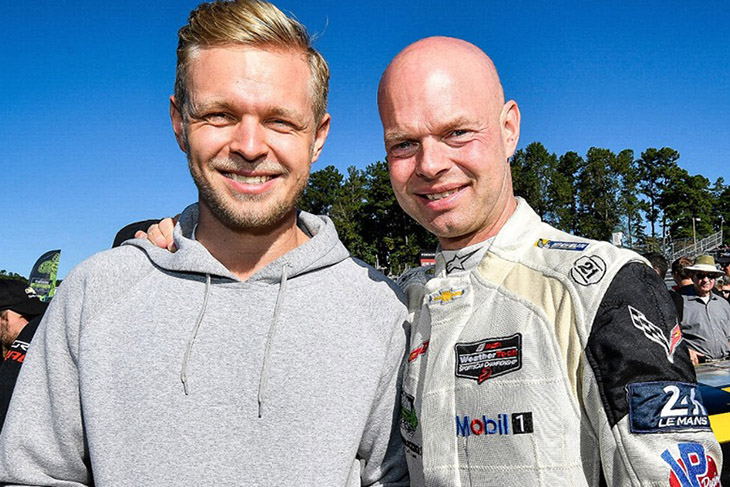 “We thought okay, if Le Mans was too tricky, maybe we can do Sebring or Daytona or something. But to be able to do it at Le Mans, hopefully in front of a lot of Danish fans is just a dream.

It says Team Denmark on the front of the car. It’s an all Danish squad with Anders as well. Is that an even further plus?

“Obviously the main thing was to do it with Kevin but to have Anders, probably one of the best silver drivers around means not only are we going as a father and son like we always wanted, but we’re actually going there in a pretty good condition.”

Are you going with a good chance to win?

“I’m not gonna say those words, but it’s a proper effort!”

Tell us a little bit about the reaction you’ve had at home in Denmark?

“So positive. And the stories that people are bringing out now with the pictures of me and Kevin when he was just a little kid.  All the news outlets and the TV stations are doing the story now with him on my arm and through his early racing, just unbelievable. I can’t contain myself.

This is perfect and just at the right time now as people are looking for something positive to get behind?

“Yeah, we’ve given them a positive story for sure. I think that’s really caught on back in Denmark as well. Everybody’s sick and tired of the (COVID) situation. And that story came just at the right time.

“Next year. Kevin goes off to Peugeot and when he’s done there I’ll definitely be too old!’

There’s one final storyline here. You get to race here at Spa against your long time teammate Ollie Gavin again one more time?

“I do and it’s fantastic. But we’re in different categories but I will give him a wave every time I pass!”