Republished, and now repurposed as part of our ongoing series of features looking at Sportscar projects that never made it to a race, Mike Fuller, in his typically thorough and detailed manner, looks back at the creation of the Nissan P35 – largely through the eyes of designer Yoshi Suzuka. But he begins the story with the all-conquering GTP ZX-T. 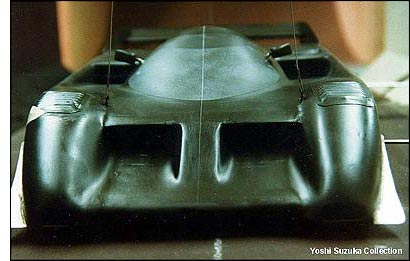 As a child, Yoshi Suzuka, father of the dominant International Motor Sports Association (IMSA) Nissan GTPs, daydreamed about airplanes, rockets and trains. These daydreams of “things that moved” turned into serious ponderings, eventually manifesting into the form of a racecar. Suzuka would eventually become responsible for the aerodynamic design of the Nissan GTP ZX-Ts that ruled the IMSA series from 1988-1990. Much has been written about these famous blue and white Nissans. But the Nissan P35, the last car of the Suzuka/Nissan GTP era, has been overlooked. And while the P35 never did race, it is the culmination of his long and successful career and that in and of itself lends it to inspection.

“The event that affected me the most was the movie ‘Red Line 7000’. I saw this movie five times in the first day. It was a movie about stock car racing.” With the passion for racecars fired, Yoshi Suzuka proceeded to the Musashi Institute of Technology in Tokyo and obtained a degree in Mechanical Engineering, graduating in 1968. His first motor sports position was as a fabricator with Peter Brock’s Datsun SCCA team, Brock Racing Enterprises. Throughout the 70s and early 80s Yoshi Suzuka honed his skills in aerodynamics working on various GTU cars (Datsun 240Z and Mazda RX-7), Can-Am (Frisbee), and Indy Cars (Eagle).

In 1983, California-based Electramotive Engineering hired Suzuka. Electramotive Engineering was formed in 1975 by Don Devendorf and John Knepp and started racing Nissans in the ranks of the IMSA GTU series, working up to GTO. Located in El Segundo California, Electramotive was in the process of building a wind tunnel, and work proceeded on that from late ’83 into ’84. Their concentration was about to move from GTO to GTP, and the 1/7 scale (14%) wind tunnel, which was completed in late 1984, would quickly become the breeding ground for some of the most successful GTP cars ever designed.

In February of 1984 Suzuka went to the Daytona 24 to reconnoiter the new Porsche 962. Upon return, a 1/7 scale model of the 962 was built and tested in Electramotive’s new wind tunnel to get a general idea of where Porsche was. In the meantime, Nissan commissioned Lola to build a GTP chassis. “The Nissan-Lola 810 was purpose built for Nissan, though the tub was similar to the Corvette GTP (Lola 710),” indicates Suzuka.

A 1/7 scale model of the Lola 810 was built, and wind tunnel testing began in earnest in late 1984. The 810 generated 3,750 lbs. of downforce at 200 mph with 1,293 lbs. of drag, for a lift-to-drag ratio (L/D) of 2.9:1. Through continuing development, Suzuka was able to improve downforce to 3,961 lbs. with only 1,178 lbs. of drag for an increased L/D of 3.36:1. Suzuka explains, “I removed the front underbody ‘bubble’ from the 810 to increase downforce and improve the car’s overall efficiency, amongst other changes. But there is not a perfect racecar that you can buy and win races with. The instinct of a racecar designer is to build your own design, otherwise it wouldn’t be fun.” 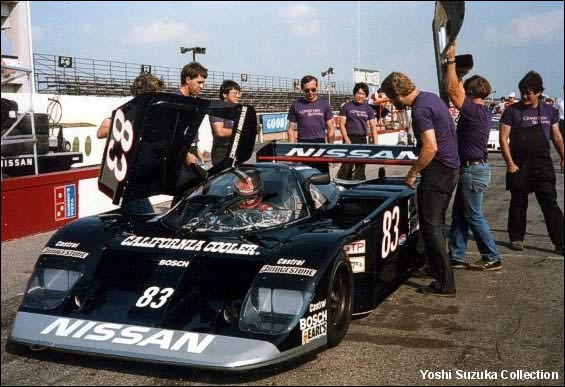 Thus, Electramotive began design studies on their own Nissan GTP, intending to debut the car late in 1986. Underneath the skin, the early Nissan GTP was still based on Lola running gear, though a Hewland VGC replaced the 810’s Weismann gearbox. Initial wind tunnel testing saw downforce increase to 5,480 lbs. at 200 mph with 1,224 lbs. of drag (L/D: 4.48:1). 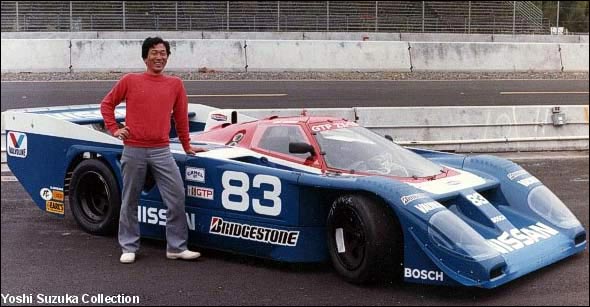 The newly bodied Nissan GTP ZX-T debuted at Portland in 1986 (Yoshi himself with the car, above) with Elliott Forbes Robinson and Geoff Brabham at the wheel. They put the car on pole and finished 3rd. Although a podium finish in its maiden race hinted at the ZX-T’s capabilities, the remainder of 1986 was spent struggling to find the right combination of speed and reliability (at the Failure and Analysis testing facility, Phoenix, AZ, below). 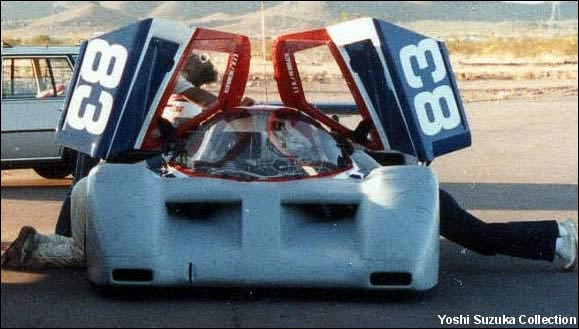 After sitting out the 1987 24 Hours of Daytona, Electramotive began their 1987 campaign at Miami where Robinson and Brabham again put the car on pole. This time, however, they were able to convert their pole position to a victory, the first win for Electramotive and Nissan.

Throughout the 1987 season the GTP ZX-T qualified well but was dogged by poor reliability. Clearly the car was very fast and was being made even faster. Suzuka adopted a double element rear wing designed by Bernard Pershing and introduced it during the ’87 season. The Pershing wing replaced the Lola single element airfoil the car had been using. Suzuka mounted the Pershing wing very low, below rear deck height, using it as an underwing extractor. Downforce was now in the region of 7,000 lbs. and L/D increased to 4.6:1.

For 1988, aerodynamics were tweaked again during the off-season. Downforce was now around 8,000 lbs., L/D between 4.6-4.75. A new Trevor Harris designed tub was introduced. Through the use of improved material (2024 T3 aluminum) and added structure, monocoque stiffness increased from approximately 30,000 lb./degree to better than 45,000 lb./degree. Electramotive’s virtual ground-up redesign of the ZX-T paid tremendous dividends during the 1988 season, “In ’88 we won 8 races in a row, only to have a drive shaft fail and costs us a 9th consecutive win. This was a Lola part and the last to have carried over from the 810”.

The results had finally come in a flood. Electromotive became Nissan Performance Technology Incorporated (NPTI) in 1989. The transition from “de facto” factory team to “official” factory team only seemed to quicken the pace of development for the 1989 season: 9,000 lbs. of downforce and L/D 4.6-4.75:1. For 1990, L/D was around 5.2 in wind tunnel testing, though the actual car’s numbers were slightly less. Since 1985, Yoshi Suzuka had participated in nearly 2500 wind tunnel tests developing the various Nissan GTPs. As a new decade dawned, the pace had clearly not slackened.

Suzuka was involved in initial design and wind tunnel testing of the 1990 GTP car, but then was called back to Japan to work for Nissan Motor Sports (NISMO). From 1990-1993, Yoshi Suzuka was responsible for the aerodynamic development of NISMO’s stable of Group C cars.

At first, Suzuka was in charge of improvements to the Lola-Nissan R90CK resulting in the Nissan R90CP (‘P’ referring to the Oppama Nissan plant where NISMO is based). In testing at Nissan’s Arizona Testing Center (above), Suzuka’s R90CP topped 396 kph (245.5 mph)! A single R90CP was entered at Le Mans in 1990 alongside four factory Nissan R90CKs and two R89Cs. The R90CP qualified 3rd and finished 5th, the highest place finisher of any of the Nissan entries that year. The 1992 Daytona 24 winning Nissan R91CP was also Suzuka’s creation. The R91CP generated 6,155 lbs. of downforce at 200 mph with 1,435 lbs. of drag (4.29:1). 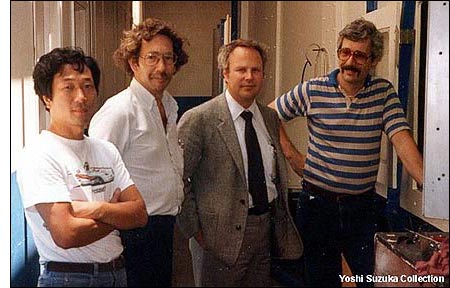 In 1991, Suzuka received a phone call, “While working for NISMO in Japan, I was summoned by Don Devendorf.”

Devendorf discussed the design of a new prototype for the 3.5 liter Group C Championship in Europe. “This car was going to be equipped with a normally aspirated motor, so she does not need to have an intercooler and its ducting system. This was big relief for me. And also I could get out from the dirty, lead-colored, smoggy, expensive, humid, cold, miserable life of the Tokyo sprawl and move back to sunny sky California!”

Wind tunnel testing for the new project, dubbed P35, began in 1991 using the same 1/7 scale wind tunnel in California. “At the early stages of wind tunnel testing, the main emphasis was to test several radical concepts, using up around 30% of the total allowable time. The rest of the tunnel time was for detail tuning of the most promising concept”.

Given very aggressive time frames since 1983, many design ideas had gone undeveloped within any given year. Suzuka, however, didn’t discard these ideas. Instead, he made a point to adopt these features in the next model, “The Nissan P35 was the results of the accumulation of past experience with some new inspirations.” Some of these new inspirations came from a previously untapped source. “I was very motivated working with a new group of DNA from the aircraft industry. Not only were they airplane guys, they were from the advanced aircraft groups. They were designing the F/A-18 and A-12 next generation fighters, until moving to NPTI. It was such a refreshing experience”.

In GTP, downforce was the aim because of the character of the tracks (more turns and at higher speeds) and the unrestricted nature of the engines. There was power to turn into downforce. In the Sports Car World Championship 3.5 liter Series, attention to the effects of drag took precedence because of the lower powered normally aspirated engines. The smallest possible frontal area was key, and the fact that the P35 didn’t use a turbo-charged engine helped. “I did not target the maximum downforce of the GTP car, since the P35 was not going to run on tight street course and since its power range was different. Maximum downforce was 8828 lbs. for 1647 lbs. of drag at a front ride height of 1.39 inch, rear ride height of 1.86 inch, and a rear wing angle of 18.6 degrees in a coasting condition. This is real car data, track testing being carried out at the Arizona Testing Center and Firebird Speedway in April and May of 1992. These numbers are only 2-4% off the wind tunnel data.”

Suzuka tested bi-plane wing configurations but didn’t find significant gains. The P35 was tested with the standard two-element Pershing Nissan GTP wing mounted low with a NACA422 single-element top wing mounted high. Suzuka concluded that the gains were minimal and that the additional weight hung out past the rear axle might counteract any aerodynamic gain, “I adopted the twin wing for Daytona only. There was a slight benefit, but only for that specific track”.

As early as 1983, Suzuka had also tested front wing configurations searching for front downforce, but he found the solution lacking. Ignoring the Peugeot and Jaguar competition, he opted against a front wing, utilizing a more conventional front splitter instead. Exhaust activation of the underwing had been used on Suzuka’s previous Nissan GTP cars, and it was also adopted for the P35. The rear lower A-arm was raised to be nearly in line with the drive shaft in order to pull it out of the diffuser. Strakes within the diffuser tunnels also improved the L/D. 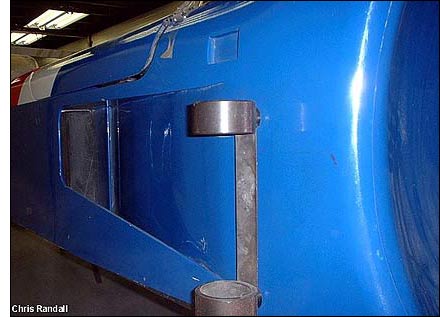