Part One can be found HERE

The first tubs manufactured for the P35 were hybrid aluminium-carbon. 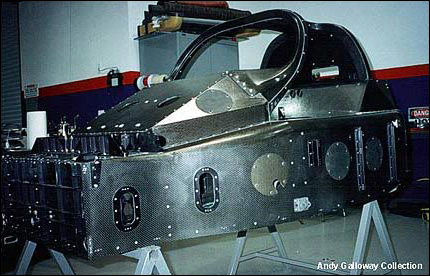 Suzuka, “NPTI was expanding, and the composite department was not ready for a carbon tub. In order to finish P35 on time, we needed a test car for engine, transmission and other details, so we built an aluminium tub as a precedent model as we could build it very quickly.” Andy Galloway adds, “The hybrid tubs had carbon roll structures and seat back units”. Aerospace structural engineers Paul Kuhl and Ed Derian designed the carbon monocoque. The carbon tub weighed approximately 152 lbs. including the roll over structure and suspension hard points. The hybrid tub weighed approximately 20 lbs. more. Both the hybrid tub and the carbon monocoque passed the FIA’s rollover hoop crush test, the first monocoques with carbon rollover structures ever to pass. Galloway continues, “The carbon roll structure was design to dynamically act as the experience-driven steel structures, but were more than 4 times stronger in the minimum sections. And the flared and blended mounting sections were more than ten times stronger than the typical tube welded to a flange plate. This continuity of structure also stiffened the tub significantly.” 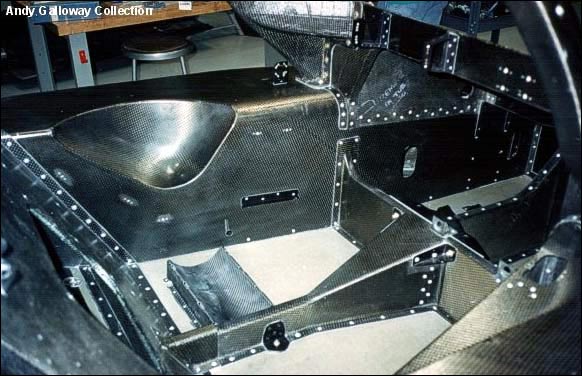 If there was any potential liability for the P35, it may have been the engine. According to Nissan, The 3.5 litre VRT 35 V12 developed 630 horsepower. 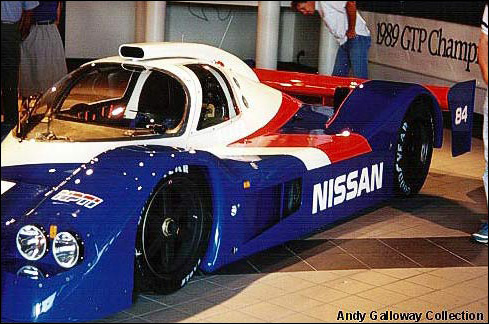 Oddly, Nissan wouldn’t allow NPTI to dyno the engine to verify the claimed power. Not to be deterred, Trevor Harris and Yoshi Suzuka were able to reverse verify the engine power numbers based on coast down deceleration testing and aerodynamic drag numbers collected from track data. They discovered that the V12 generated closer to 500 horsepower. “There were definitely some issues with the atmospheric engine, “ says Suzuka, “but this was Nissan’s decision… No consideration was taken for fitment of the turbo IMSA engine. The P35’s small frontal area was achieved because of not having to take into consideration intercoolers inlets, etc., associated with turbo motor installation.” 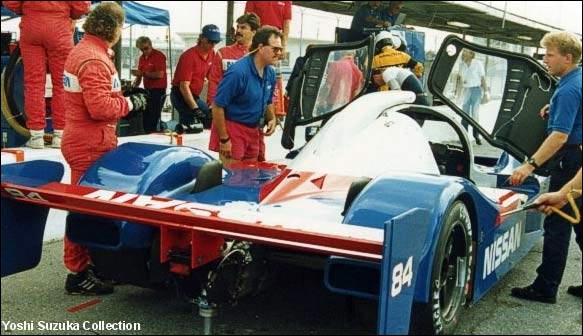 Testing was conducted at Mid-Ohio and Daytona Speedway (above) with shakedowns in Carlsbad, California, Nissan’s Arizona Testing Center, and Firebird Raceway in Phoenix, Arizona. Johnny O’Connell, test driver for the P35 program, “The car was breathtakingly beautiful. Handling and braking was just incredible. At Daytona, our top speeds were only around 170 mph but we were still doing laps in the 1:38 range. The car simply had no power! But in the corners and under braking the P35 was unbelievable!”

Concurrent to the P35 program, NISMO was developing a derivative of the P35 in Japan, the NP35 (above). NISMO was interested in honing the P35 specifically for the All Japan Sports Car Championship’s shorter sprint events. Johnny O’Connell, “Jeff Krosnoff was a good friend of mine, and he actually did some running in Japan in a ’35. It’s funny in that, when we compared notes, he didn’t like the chassis but did like the engine, whereas I loved the chassis but not the engine. I am guessing that the engine and chassis used over in Japan were quite different.”

In fact, under the skin, the NP35 was quite different. The NISMO version of the VRT 35 V12 power plant was developed for the shorter sprint events of the Japanese series and henceforth more powerful. The NP35’s wheelbase was 100 mm longer than the NPTI P35 chassis and the carbon monocoque was designed and built exclusively for the NISMO car. According to Andy Galloway, “They [NISMO] had continuous and full access to every document, file, and activity, including videotaping how we built components. CAD files were sent each evening to Japan.” The bodywork for the NP35 was laid-up from molds manufactured in Japan, as had the bodywork and tooling for the P35. The NP35’s bodywork was nearly the same as that of the NPTI car, but for some very minor modifications to the nose.

Late in 1992 NISMO entered the NP35 in the final round of the All Japan Sports Car Championship at the Mine circuit. The NP35 qualified last and finished the race 4th in class (last overall). It was plagued with problems throughout the weekend and never really showed any speed.

The world economic recession hit Japan the hardest and ultimately it was decided to terminate the P35 program. Nissan asked NPTI to box all the parts related to the P35 program and ship them back to Japan. Suzuka, “I was at NPTI until the final day of the P35 program. The last modification I made to the P35 was the engine intake. Many shapes and materials (such as the rubber diaphragm type) were tested in the wind tunnel and on the full size car and the final answer was to place the inlet above the front windshield.” With that modification, the P35 program was over.

Could the Nissan P35 have competed with the likes of the Toyota and Peugeot in the 3.5 Litre Championship? “We could have beaten them in the wind tunnel”, Suzuka responds. “On the track…? Difficult to say.” 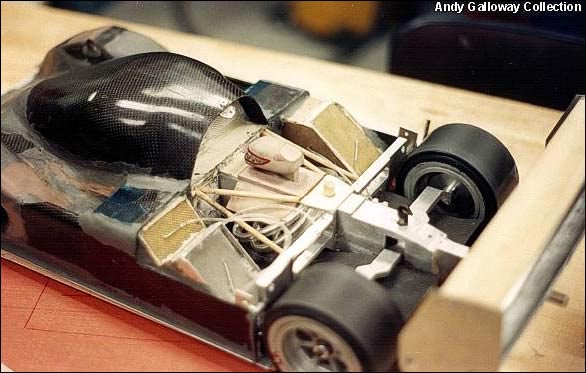 But that wasn’t quite the end of the P35. In the summer of ’92, NPTI staff, not to be forsaken, began initial wind tunnel studies looking at optimizing the P35 for the GTP category. The tub and suspension were to be retained to form the basis for the ’93 GTP chassis. The front radiator was removed to allow for a greater scope for front-end downforce, the coolers being relocated to waist positions in the side pods. The 93 GTP was to use the turbo Nissan GTP motor in place of the gutless V12. Wind tunnel testing showed downforce to be slightly over 10,000 lbs. at 200 mph for around 1,660 lbs. of drag. Unfortunately, the writing was on the wall for GTP series, and the P35-based GTP was dropped in favour of a project focused on Nissan Indy Car engine and chassis development. Even that was unable to sustain NPTI, as the Indy Car developments soon came to a halt. By the end of 1992, NPTI let go a majority of its staff, and on March 29th 1993, NPTI closed its doors for good. The P35 became a mere footnote.

In total, three P35 variants and one NP35 were completed and assembled. The first two P35s had the aluminium-carbon hybrid monocoque, while the third had the carbon tub. It must be noted that three carbon P35 monocoques were manufactured but only one carbon-tub car was fully assembled. It can only be presumed that the two additional carbon tubs were written off by Nissan and destroyed.

John Christie, crew chief for NPTI, and a group of former NPTI employees converted P35 chassis No.1 into an open-top World Sports Car. The car was renamed the X-250 in homage to the 250 former employees of NPTI. A 3.4 litre Ferrari V8 was installed in the engine bay, the tunnel under tray was replaced by the WSC mandated flat floor, and the carbon rollover hoop was removed and replaced with a conventional steel hoop.

The X-250 debuted at Sebring in 1997, and its race was a very short-lived 21 laps before its electrics gave up. Christie retained the X-250 though it never raced again. 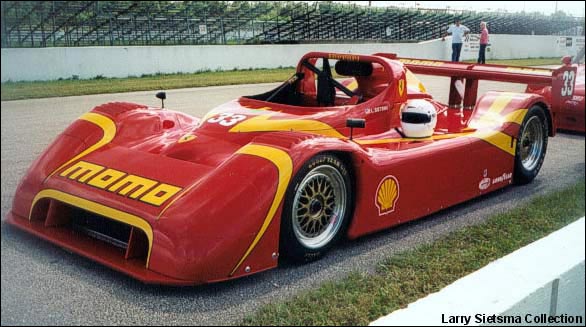 In 2000, Larry Sietsma purchased the car directly from Christie, and it currently resides in Florida. Sietsma runs the X-250 at various HSR and Ferrari club events each year.

Chris Randall acquired chassis No. 2 early in 2002. Using molds obtained from the X-250 project, car No. 2 is presently being restored to running order. Randall adds, “I think that our car (No. 2) was going to suffer a similar fate [to No. 1] at one point!” Chris Randall hopes to have the P35 on the track in the future, although questions remain about which engine to use. As one might imagine, a Nissan V12 is proving difficult to come by.

The carbon monocoque chassis No. 3 remained with Nissan. Currently, it resides at Nissan’s Technical School, sans engine. Nissan also owns the only NP35 in existence. Occasionally, this car is dusted off and demonstrated at annual NISMO festivals (the in-car footage below is during the ‘Circuit Safari’ session in 2008.

Suzuka adds a few final thoughts about the program, “It was a great joy to design a sports car as a race engineer. Whoever likes a car, he will love a sports car. It would have been interesting to see this kind of vehicle race on a high speed NASCAR oval with a packed grandstand.”

Yoshi Suzuka is still busy. Recently he was involved with the aerodynamics development of the Nissan 350-Z GT car for the Japanese Grand Touring Championship. Suzuka is also running his own consultancy, Suzuka Racing Services located in Tokyo Japan. SRS does consultant work for NASCAR teams though their main project is the development of a low cost rolling ground plane wind tunnel.

Suzuka continues to daydream, “After I am retired, I will do a Bonneville speed record by myself and will fly an ultra-light plane, and I will make a steam locomotive or make the very first small composite aeroplane with a turbo-charged motorcycle engine. Today, I was browsing the Internet, looking for a model jet turbine engine for a radio-controlled aeroplane; I like to do those things. I travel all over the world surfing and diving, and I also am a prospector in the California desert!! Oh well, I need to live another 50 years to do all those things.” Given his amazing motor sport record, one might hope that a few of those 50 years would be spent designing sports cars.

Many thanks to Yoshi Suzuka, Andy Galloway, Chris Randall, Larry Sietsma, Ryan Hicks, Johnny O’Connell and Bob Chapman for help with this article.