The #26 G-Drive Racing Aurus 01-Gibson took the top spot in the red flag interrupted LMP2 qualifying session for the 4 Hours of Le Castellet.

Nyck De Vries claimed his first pole position of the 2021 European Le Mans Series with a 1:42.166 lap at the chequered flag.

Championship leaders Orlen Team WRT finished in second spot, with Louis Deletraz setting a 1:42.323 in the #41 Oreca, just ahead of reigning champion Phil Hanson in the #22 United Autosports Oreca-Gibson.

The session had to be red flagged after four and a half minutes when the #37 Cool Racing Oreca of Nicolas Lapierre stopped on track, near to the pit lane entry. Only half of the field had set a time at that point with the #22 United Autosports Oreca holding the top spot. Lapierre managed to get the car restarted and he recovered to the pits so the session could restart.

With the green flag waved, the session restarted with five minutes left on the clock and there was a mad dash to get back on track. De Vries went to the top spot with a 1m42.574 on his first attempt and then went even better by 0.408s as the chequered flag was shown to end the session.

The #37 Cool Racing Oreca managed to make it back out before the end of the session with Nicolas Lapierre finishing 4th and finish as the top Pro-Am entry.

Reigning Michelin Le Mans Cup LMP3 Champion Laurents Hörr revelled in the conditions at Le Castellet to take the pole position in the LMP3 class for tomorrow’s 4 Hours of Le Castellet. The German posted the provisional pole at the very start of the session and bettered his own time three times to take the chequered flag in 1:48.440.

Laurents Hörr was then penalised for having crossed the white line at pit entry causing the cancellation of his fastest lap. However, his second fastest lap of 1m48.543 kept him on pole position.

There were several contenders for the second place on the grid, with Garett Grist snatching the position in the #20 Team Virage Ligier at the chequered flag with a 1m48.826 lap, pushing the no8 Graff Ligier of David Droux down to third by just 0.05s.

Ross Gunn claimed the pole position in the LMGTE category taking the chequered flag with a 1m51.824 lap time in the #95 TF Sport Aston Martin Vantage to demote the #93 Proton Competition Porsche of Richard Lietz. 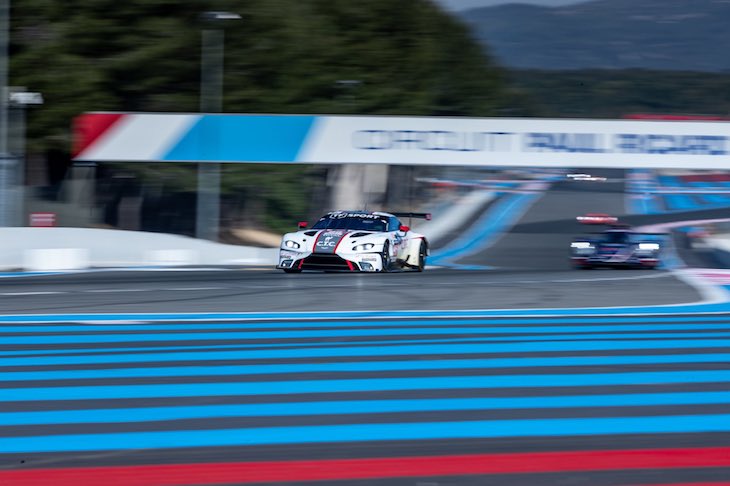 The 10-minute session saw the #77 Proton Competition Porsche of Gianmaria Bruni make the early running, the Italian posting a 1:52.299 lap before pitting for fresh rubber, just 0.005s ahead of Ross Gunn in the #95 Aston Martin. As Bruni pitted the no93 Porsche went to the top of the timesheets, with Lietz posting a 1:51.944.

Richard Lietz pitted with 2 minutes left on the clock while the rest of the field came back out on fresh rubber to try and get a better time. Bruni’s lap was deleted for track limits at T8 so it left Ross Gunn on a fast lap. The British driver crossed the line to take pole by 0.120s.